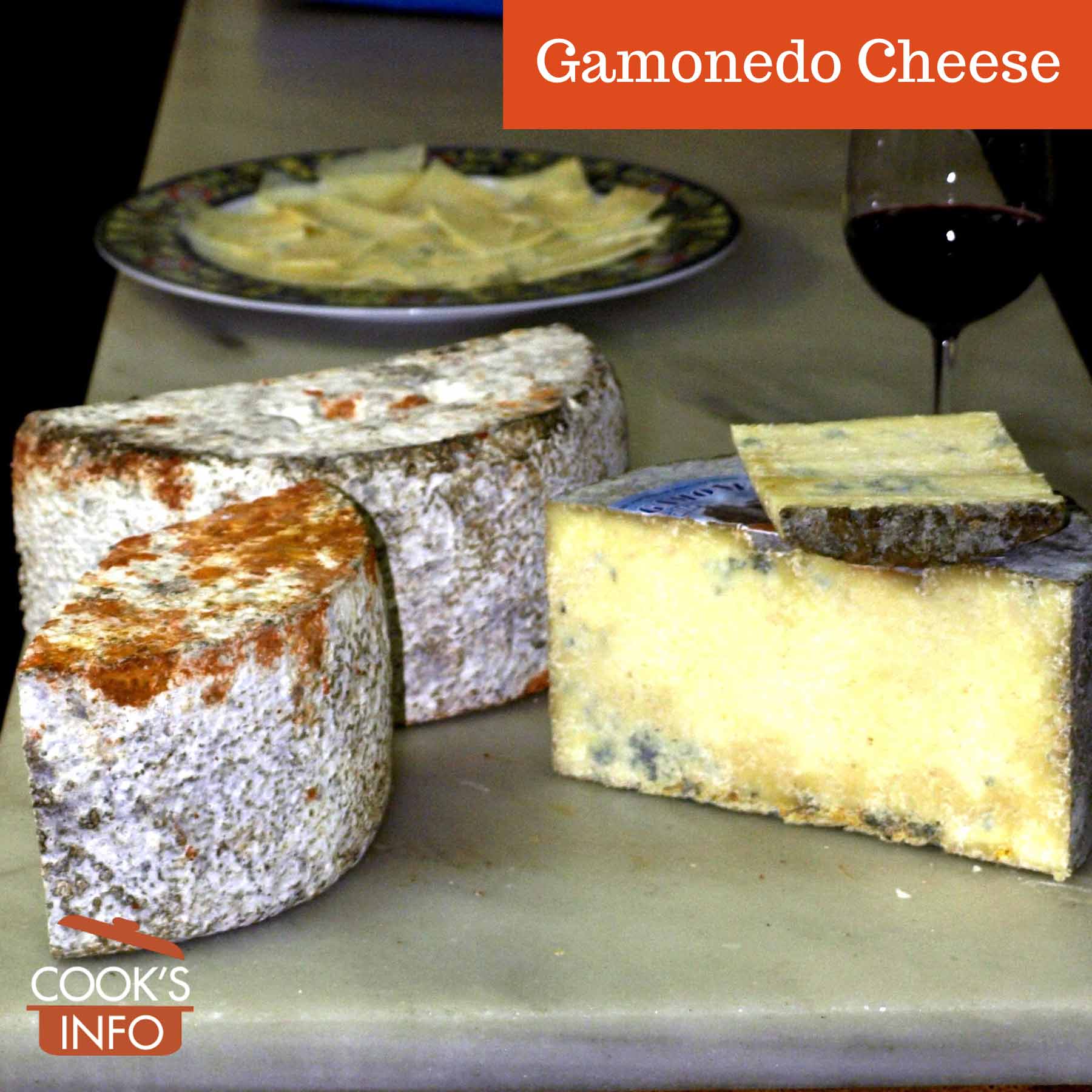 Gamonedo is a Spanish cheese from the Asturias region on the northern coast of Spain.

The cheese has a thin, inedible rind typically with some reddish mottling in it.

Inside, the cheese is white or yellowish white, with some small holes, with greenish-bluish streaks of Penicillium at the edges under its inedible rind. It has a crumbly, semi-firm to firm texture.

It has a lightly-smoked taste that comes out more as the cheese ages, and a nutty aftertaste.

Production of the cheese

The cheese has to be made in the areas of the Cangas and Onís villages on the edge of the mountain range called “Picos de Europa”.

The milk used must come from those areas as well, but can be from cows, sheep, goats, or any combination of milk thereof. You can use milk from your own herds or buy it from other farmers in the area.

There are two varieties of the cheese. One is made up in the mountain passes; the other is made lower down in the valley.

The mountain version called ‘Gamonedo del Puerto’ or ‘Gamoneu del Puerto’ is made up in the mountain passes in small cheese making huts. It is only made from June to September, and by only a handful of families, so consequently this Puerto version is rarer and harder to find. The milk used will be a minimum of 10% sheep or goat’s milk: the rest of the milk can be sheep, goat or cow.

The valley version, called ‘Gamoneu del Valle’ or ‘Gamonedo del Valle’, is made lower down in the valley and consequently is made year round.

After 24 hours, and again after 48 hours, the tops and bottoms of the cheeses are salted. The cheeses are then removed from the moulds, and smoked slowly over 10 to 12 days with smoke from ash, heather, or beech wood. The outer rind forms during this smoking process.

By law, the aging of the cheeses must occur in the Cangas and Onís areas, but it can take place either in caves or cellars. The minimum aging period allowed is two months. Some makers will age the cheeses for up to 5 months. The cheeses are turned and cleaned during this aging.

The mould found in Gamonedo Cheese develops naturally during this aging period. It is neither added to the milk nor injected into the formed cheeses.

This area of Spain was making cheese back in the 1100s, according to a 1641 record prepared for King Philip IV. The makers of Gamonedo Cheese invite you to believe that the cheese being made was in fact Gamonedo Cheese, though there’s no way to know for sure, and it’s highly doubtful.

At the annual fall fair in Cangas de Onís, there is a day dedicated to the cheese.

This web site generates income from affiliated links and ads at no cost to you to fund continued research · Information on this site is Copyright © 2022· Feel free to cite correctly, but copying whole pages for your website is content theft and will be DCMA'd.
Tagged With: Asturian Cheeses, Asturian Food, Protected Designation of Origin, Spanish Cheeses, Spanish Food