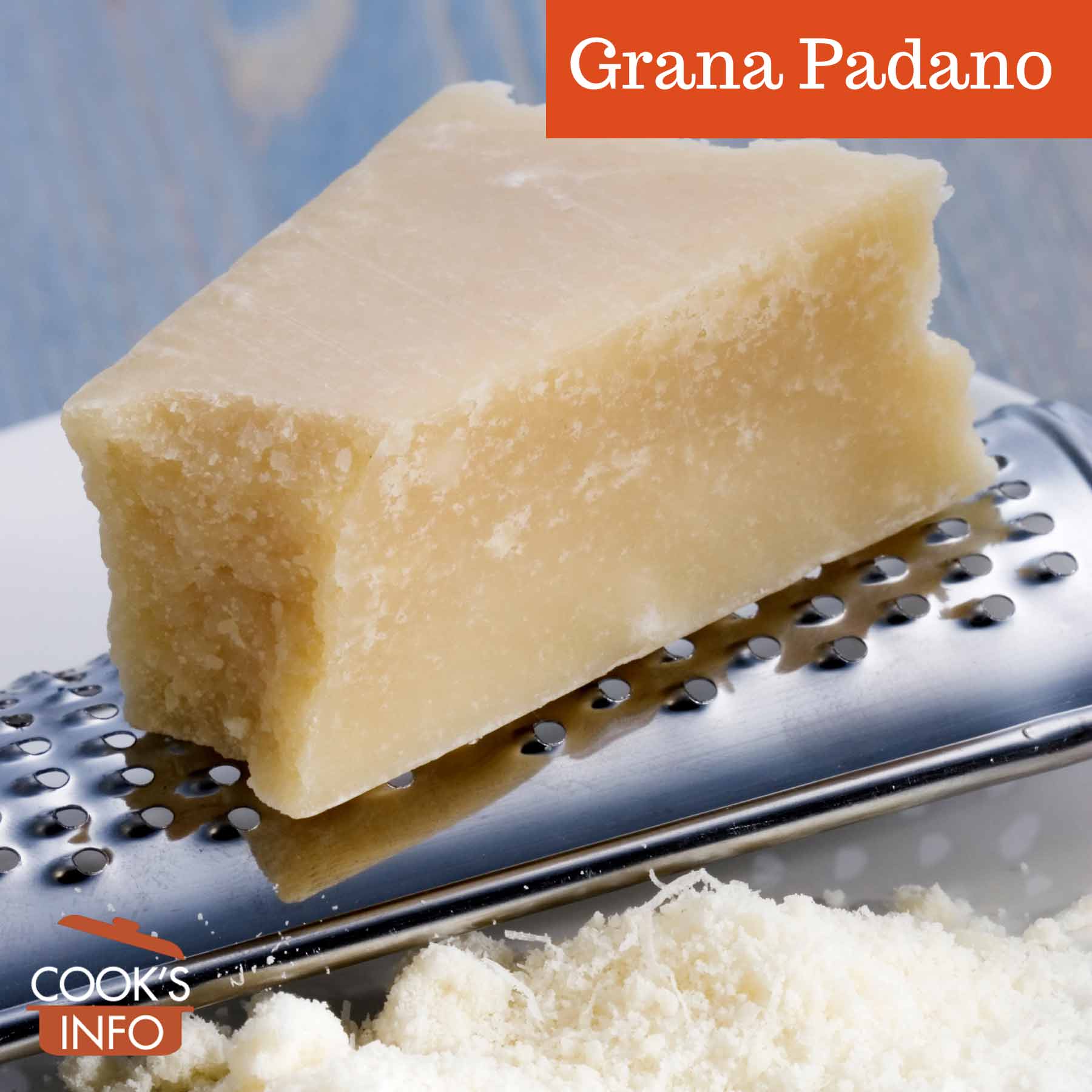 Grana Padano is a hard cheese used for grating. It is like Parmesan, but it is not aged as long, it has a milder flavour, and its texture is a little coarser.

The rind is oiled and a gold colour. Inside, the cheese is white or straw-yellow with a granular texture.

Grana Padano has had protected status in Italy since 1955. It has been a PDO cheese since 1996. It is made in Piedmont, Lombardy and Veneto.

The cheese is made from semi-skim raw milk from cows. 15 litres (4 U.S. gallons) of milk will yield approximately 1 kg (about 2 lbs) of the cheese.

The milk is put in large pots made of copper. Whey from a previous day’s batch is used as the starter. It is allowed to ferment a bit before being added to the milk. When it’s added, the milk heated is to between 31 to 33 C (88 F and 91 F). Rennet is then added. The curd is cut, but not drained of its whey, then heated and stirred, heated up between 53 and 56 C (127 F and 133 F). It is then allowed to rest for anywhere from half an hour to an hour submersed in the heated whey. For this reason, Grana Padano can be classed as a “cooked cheese.”

The curd is then drained and packed into cylinder moulds weighing on average 34 kg (75 pounds). The cheese wheels are aged for a minimum of 8 months, and turned while aging. A good deal of Grana Padano is aged longer, up to a year to a year and a half.

At the end of aging, cheeses that pass the quality checks are branded to certify them, and are ready for sale. 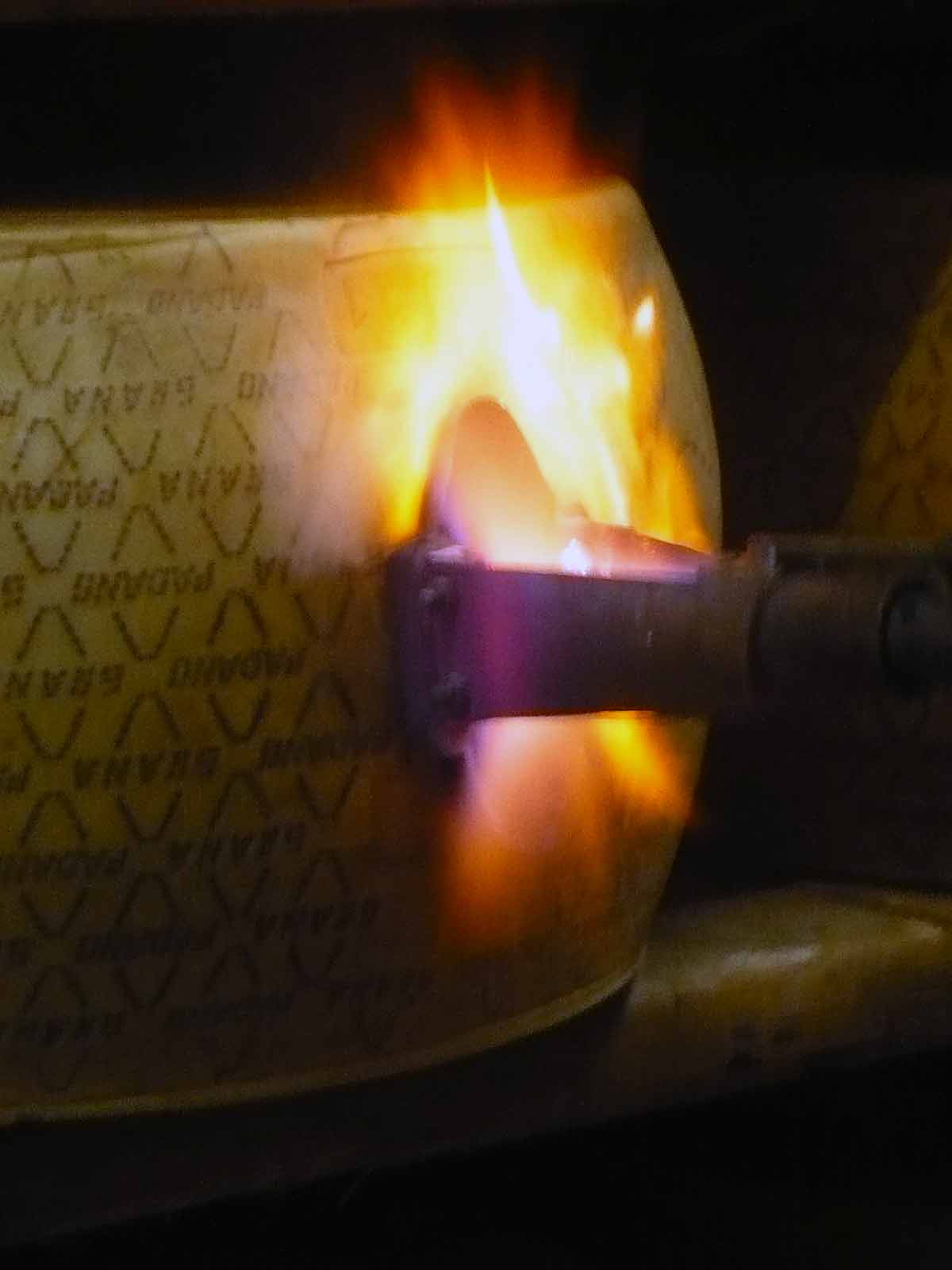 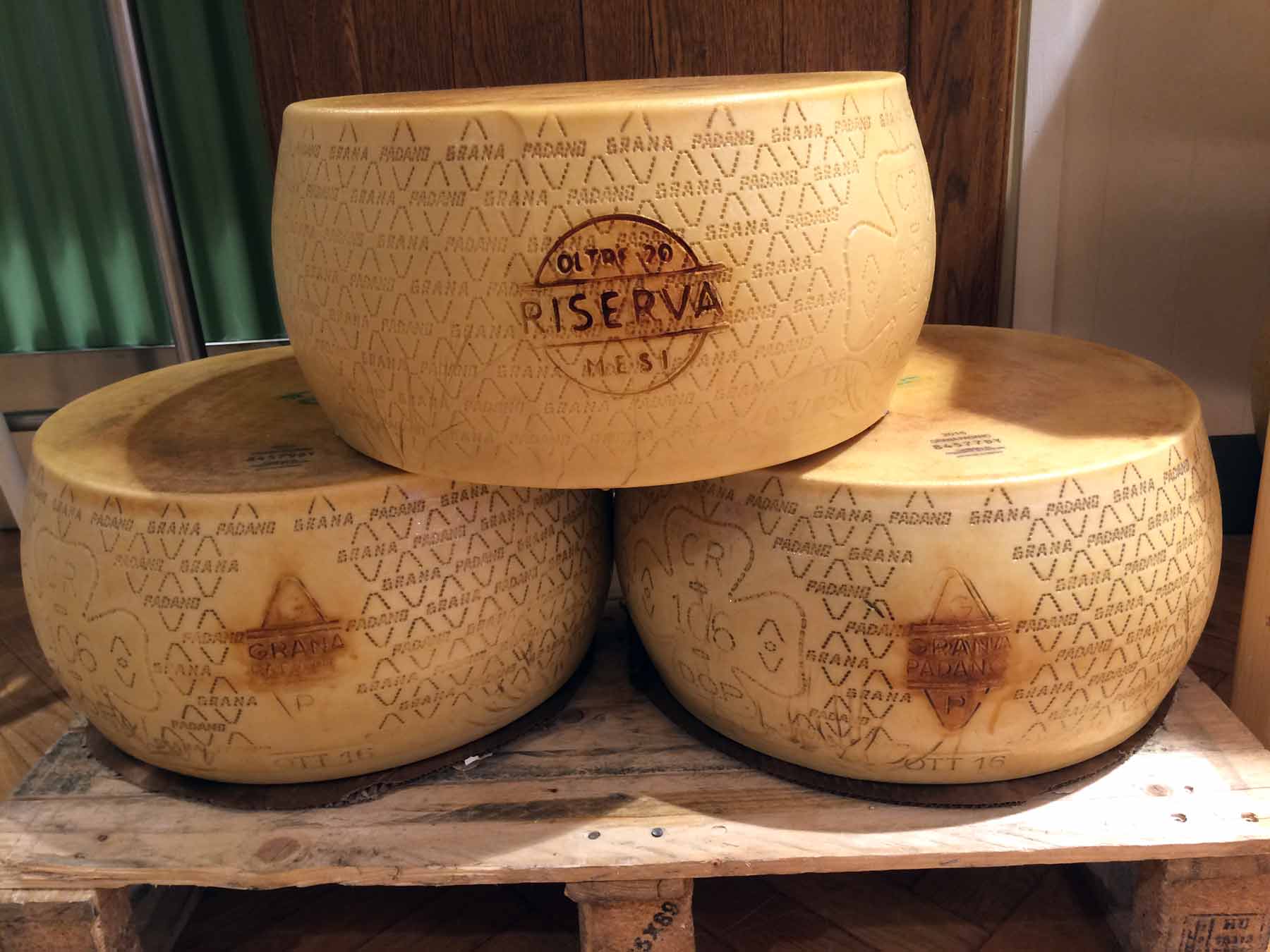 Grana Padano is not well known in North America and the UK because Parmesan is the one that has been marketed to consumers as the one to use all the time. In fact, however, Grana outsells Parmesan 10 to 1 in Italy. Italians use it for everyday cooking, reserving the more expensive Parmesan for particular dishes or occasions or for use as a finishing cheese.

Parmesan, in fact, didn’t get its start until 200 years after Grana, and it was a copy of Grana. 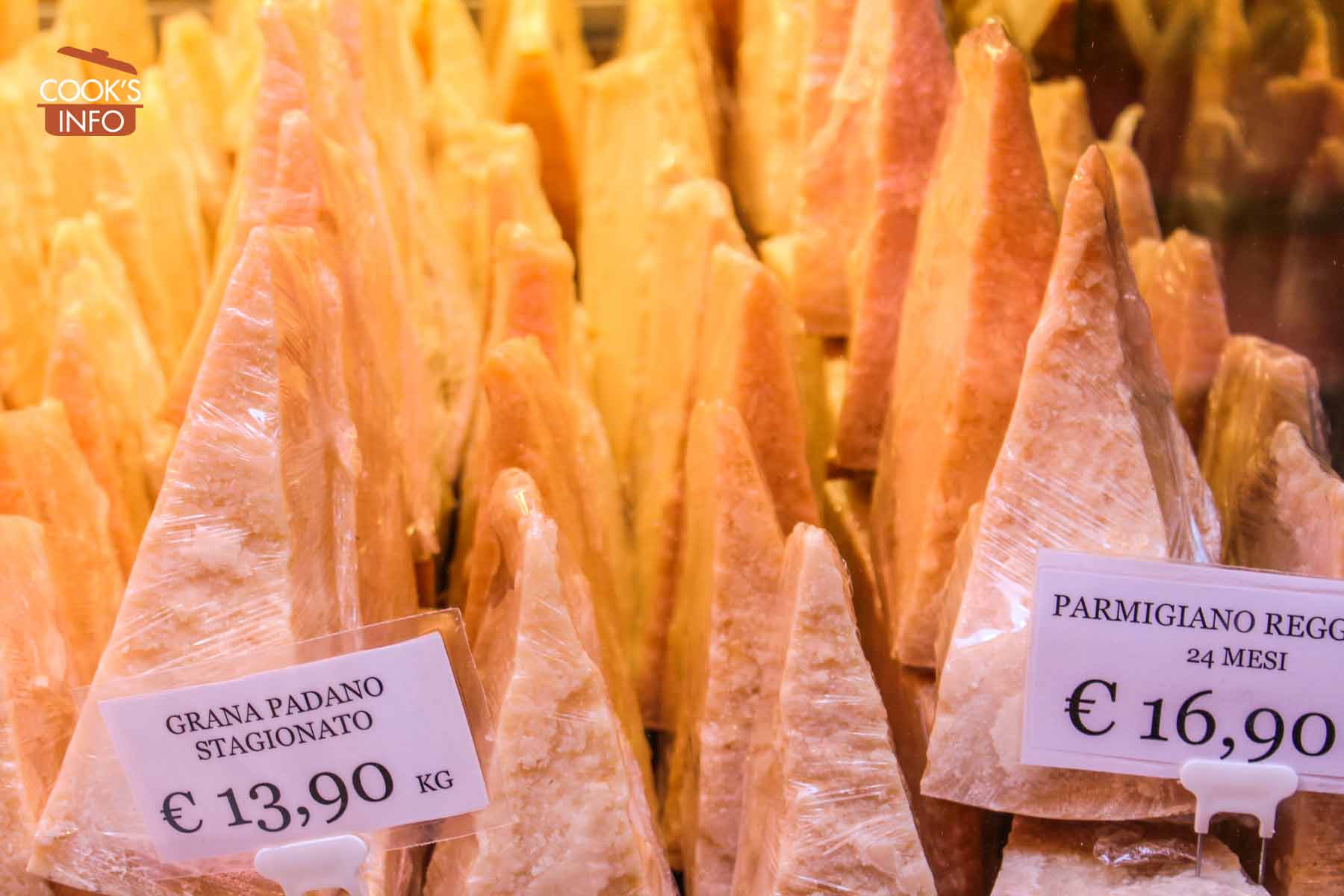 Under the right conditions, Grana Padano can be stored uncut for 1 to 2 years.

The technique for making Grana Padano was developed by Cistercian monks at Chiaravalle in the Po Valley of Northern Italy. It was being made by 1150 AD; by 1477 it was well known throughout Italy. The cheese has a good storage life, so it was easy to trade and transport.

The name “grana” refers to the cheese’s granular texture. 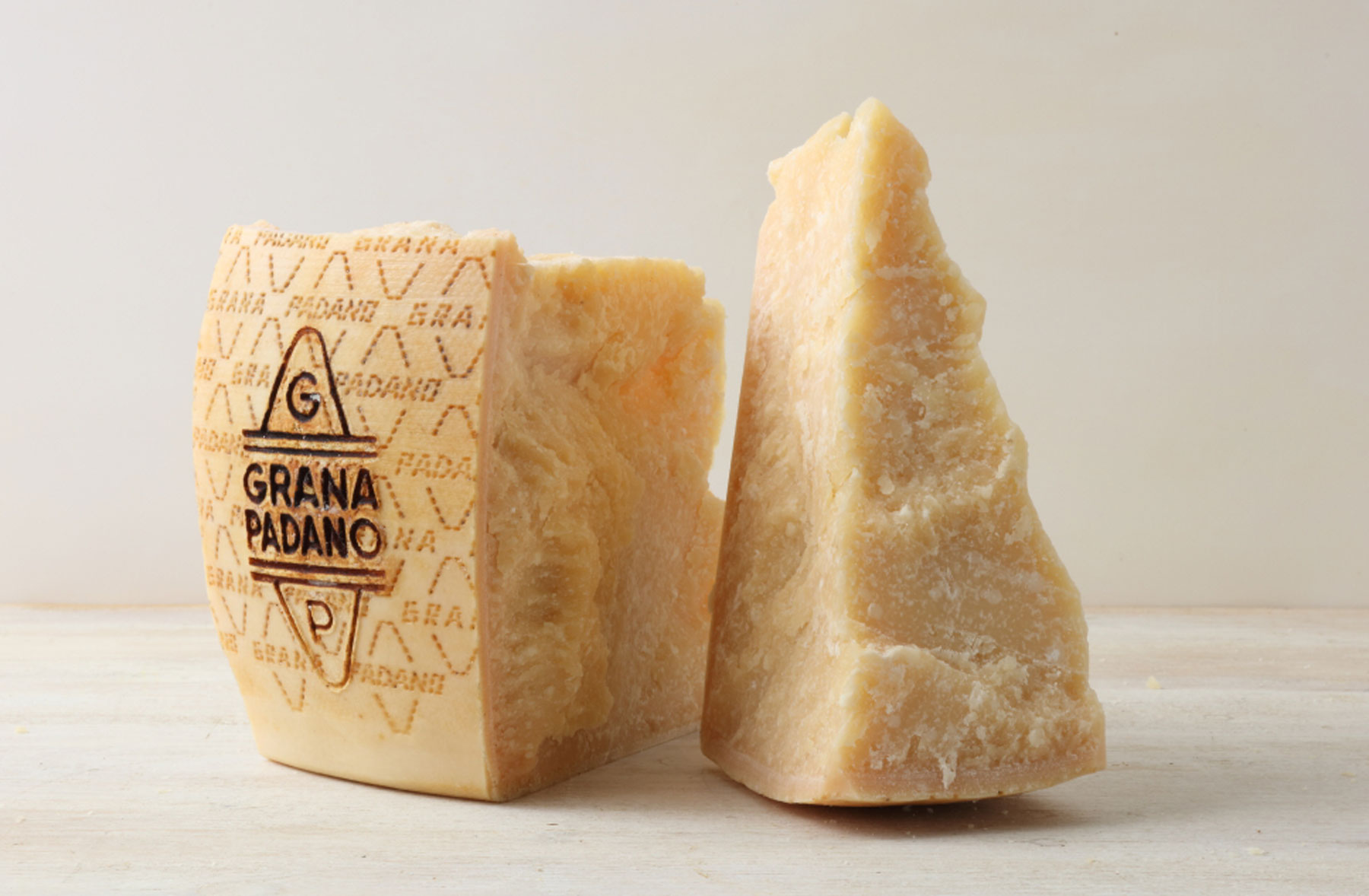 This web site generates income from affiliated links and ads at no cost to you to fund continued research · Information on this site is Copyright © 2022· Feel free to cite correctly, but copying whole pages for your website is content theft and will be DCMA'd.
Tagged With: Italian Cheeses, Italian Food, Protected Designation of Origin, Skim-Milk Cheeses