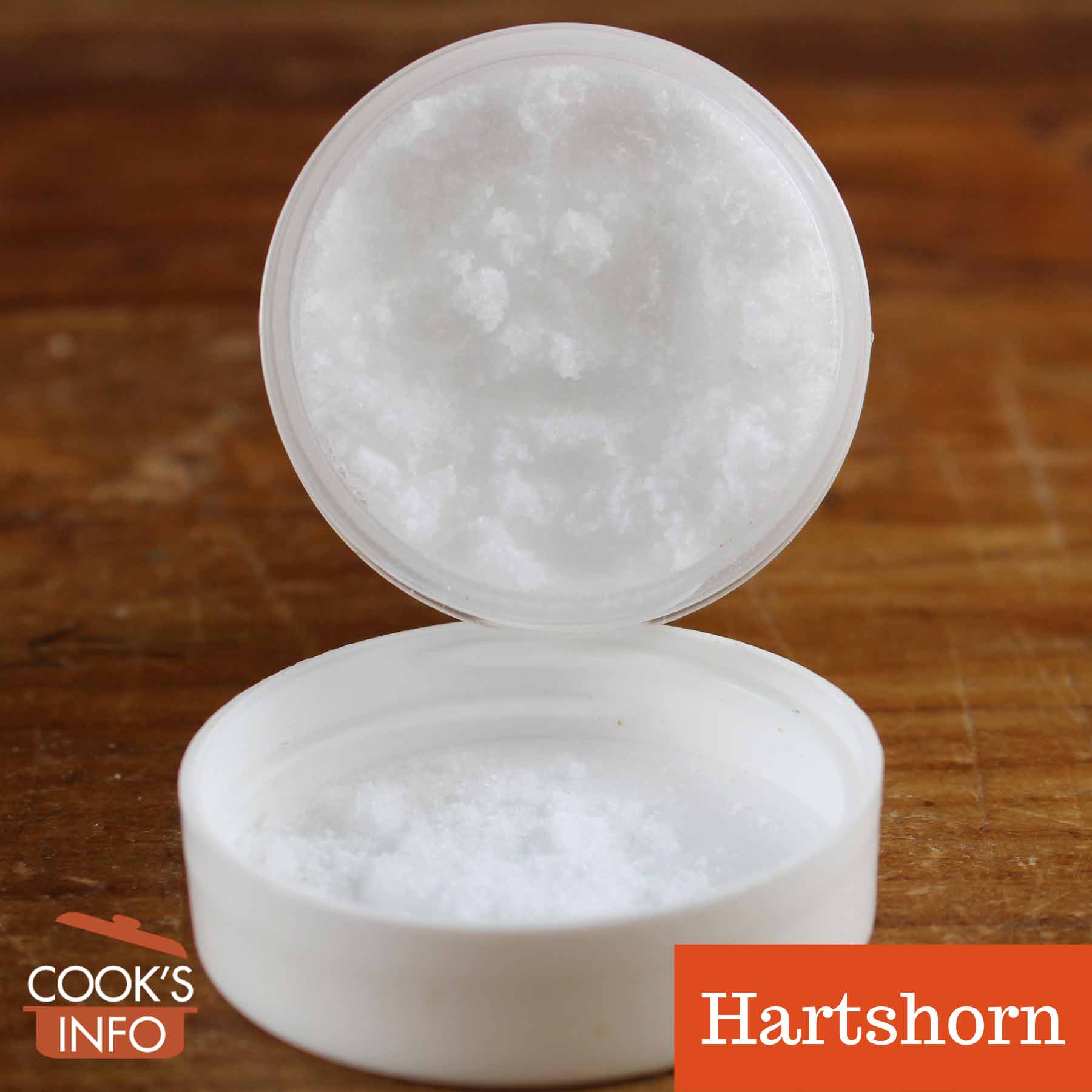 Hartshorn (aka Ammonium bicarbonate or ABC)

Hartshorn is a chemical leavener for cooking that was used before baking powder and baking soda became available.

It used to be made from the ground-up antlers of a hart (the term for a male deer.) It could also be obtained by distilling hair or decomposed urine. Later, it was chemically reproduced as an ammonium salt called “ammonium carbonate.”

Hartshorn is heat activated and therefore doesn’t need anything to react with, just heat about 60 C (140 F). This means that baked goods leavened with it don’t have to be raced into the oven.

“ABC decomposes on heating at 60°C in a temperature-driven reaction releasing carbon dioxide, ammonia, and water vapor…  Since ABC does not start acting before the oven, it means that products do not gas when the dough is mixing or standing which can be important during plant breakdowns. Biscuit makers also value the consistent stack height it gives, and it leaves no residue and no adverse flavors in low moisture products.” [1]Streekstra, Hugo and Andy Livingston. Acrylamide in bread and baked products. In: Breadmaking (Third Edition). 2020. Pp 289-321.

Hartshorn won’t leave any alkaline flavour as baking powder or baking soda can sometimes. The downside is that any traces of it left in the baked good can leave a trace of an ammonia smell. It is therefore better used in small things such as cookies, crackers or biscuits where there is less batter for the gas Hartshorn produced to have to fight its way out of. North American style muffins, for instance, would be too big.

For the same reason, it is not used for soft or moist cookies, as the gas would be trapped in them, but rather it is used in dried ones that are meant to cook up crisp.

“Ammonium bicarbonate will also decompose during baking and release ammonia and carbon dioxide leavening gases without reacting with a leavening acid. Unlike sodium bicarbonate, which leaves a residue of alkaline sodium carbonate, ammonium bicarbonate leaves no residue when it decomposes by heat. It, therefore, has no effect on the pH of the baked product. If there is more than about 5% moisture in the baked product, however, the ammonia gas will dissolve in this water and impart an ammoniacal flavor to the product. For this reason, ammonium bicarbonate is used only in low-moisture products such as crackers.” [2]Vetter, J.L. Leavening Agents. In: Encyclopedia of Food Sciences and Nutrition (Second Edition). 2003. Pp. 3485-3490.

The oven will smell like ammonia while the baking is happening.

Today, Hartshorn is derived from the carbonic acid called (NH4)2CO3, so you no longer have to fret about adding ground reindeer antler or dried urine into your cookie dough. It is sold either powdered or in lumps, which you have to crush yourself. The best chance of finding it in North America might be in a drugstore, or in ethnic sections of grocery stores.

If you see a recipe that calls for it, it is an old recipe. It will appear largely in older German and Scandinavian recipes, particularly gingerbread cookies. It is often used in Lebkuchen, German cookies at Christmas. Cookies made with it are sometimes referred to as “Ammonia Cookies.”

Some people say that it still makes some baked goods fluffier than baking powder can.

Some large commercial bakers still use it for gingerbread, crackers, etc.

When used as smelling salts, is called “Salt of Hartshorn.” 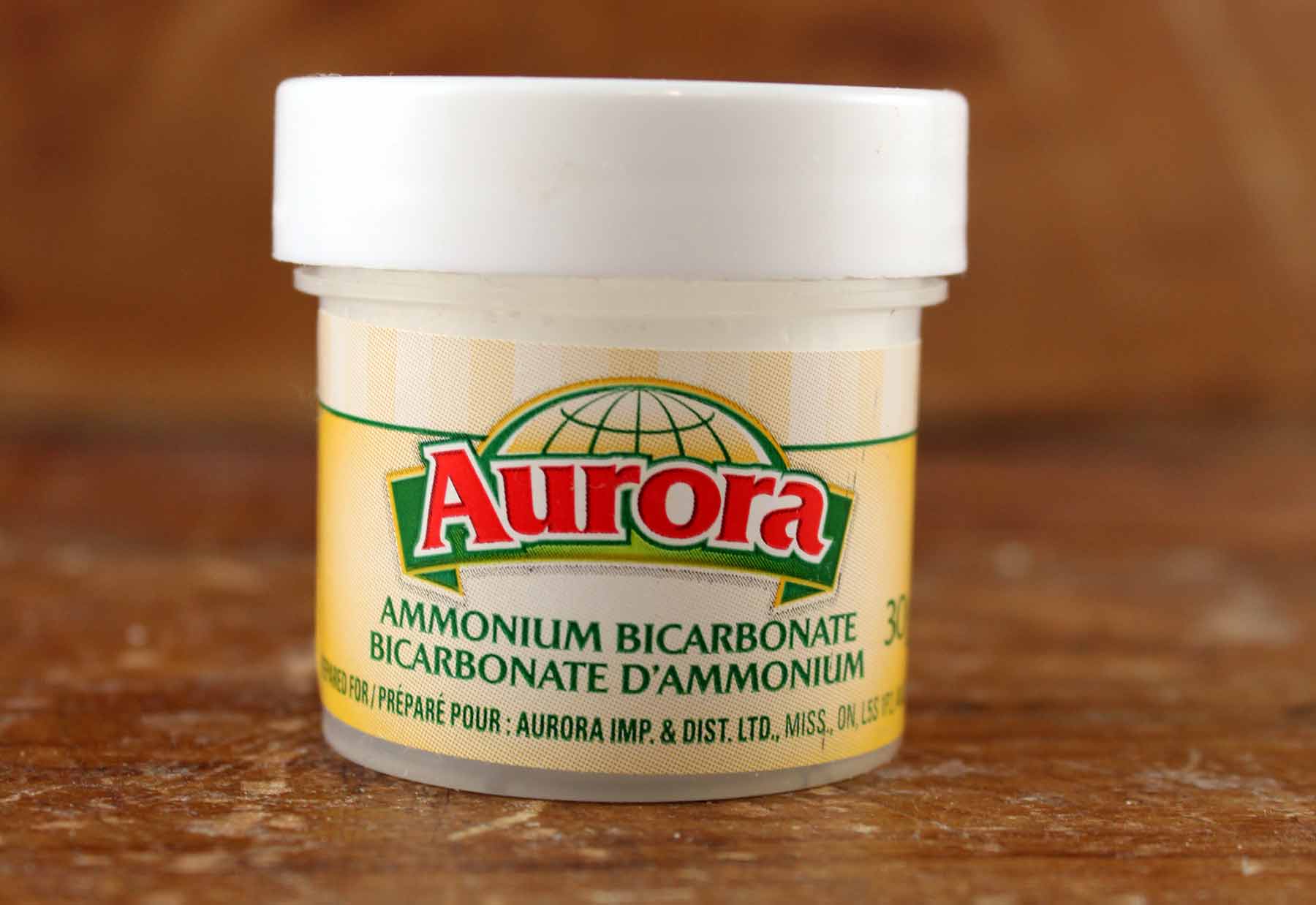 Usually, but not always, recipes will ask you to mix it with water first, for even distribution.

Safety warnings about ingesting or touching it apply to the pure, “uncooked” powdered form. In its pure form from the container, it can cause eye and skin irritation, may be harmful if swallowed or if breathed in can cause respiratory tract irritation. [3]Fisher Scientific Material Safety Data Sheet: Ammonium bicarbonate. MSDS# 01100. Revision #9 Date 7/20/2009. To be clear, this does not apply to it after baking because heat chemically changes the compound completely.

However, ammonium bicarbonate has been discovered to promote acrylamide formation, which is now suspected to be carcinogenic.

Baking powder on a 1 for 1 ratio, or per 1 part hartshorn, 1 ⅓ parts baking soda (if there is an acid in the recipe that the baking soda can react with.)

Store indefinitely in a very tightly sealed container, or it will just disappear on you, having evaporated over time. For this reason, the addition of ammonium bicarbonate to dry mixes is not possible. [5]Tiefenbacher, Karl F. Technology of Minor Ingredients for Wafers and Waffles. In: Wafer and Waffle, 2017. Chapter 4. Pp 227-311.

Male deer antlers, or hartshorns, were also used to make a gelatin from. This use in fact appears to precede that of leavening.

It appears that Hartshorn was being used for a gelatin in the 1600 and 1700s, and that only at the end of the 1700s did it start to be used as a leavener.

Hartshorn was still being used as a source for gelatin up until at least the mid 1800s. 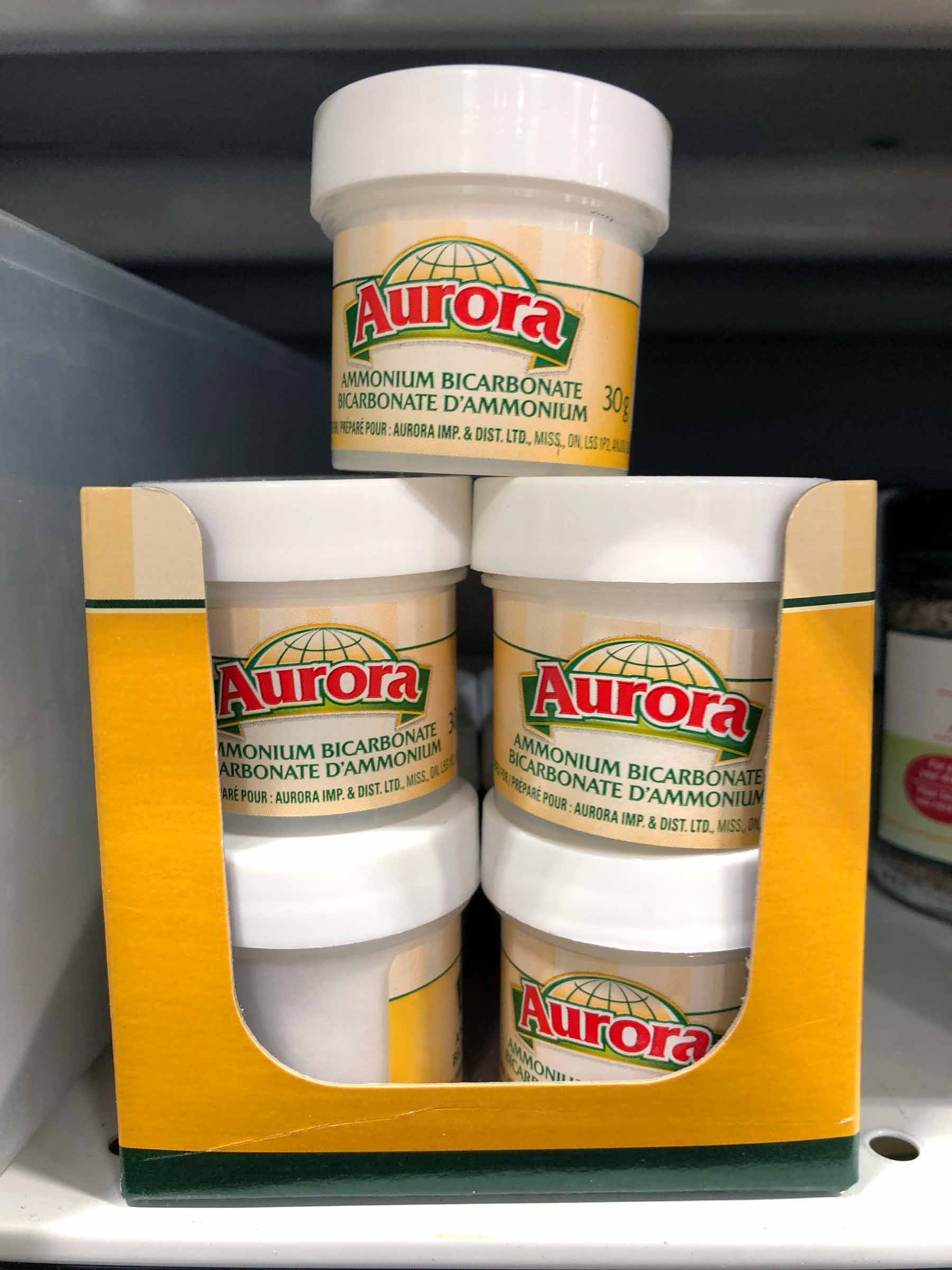