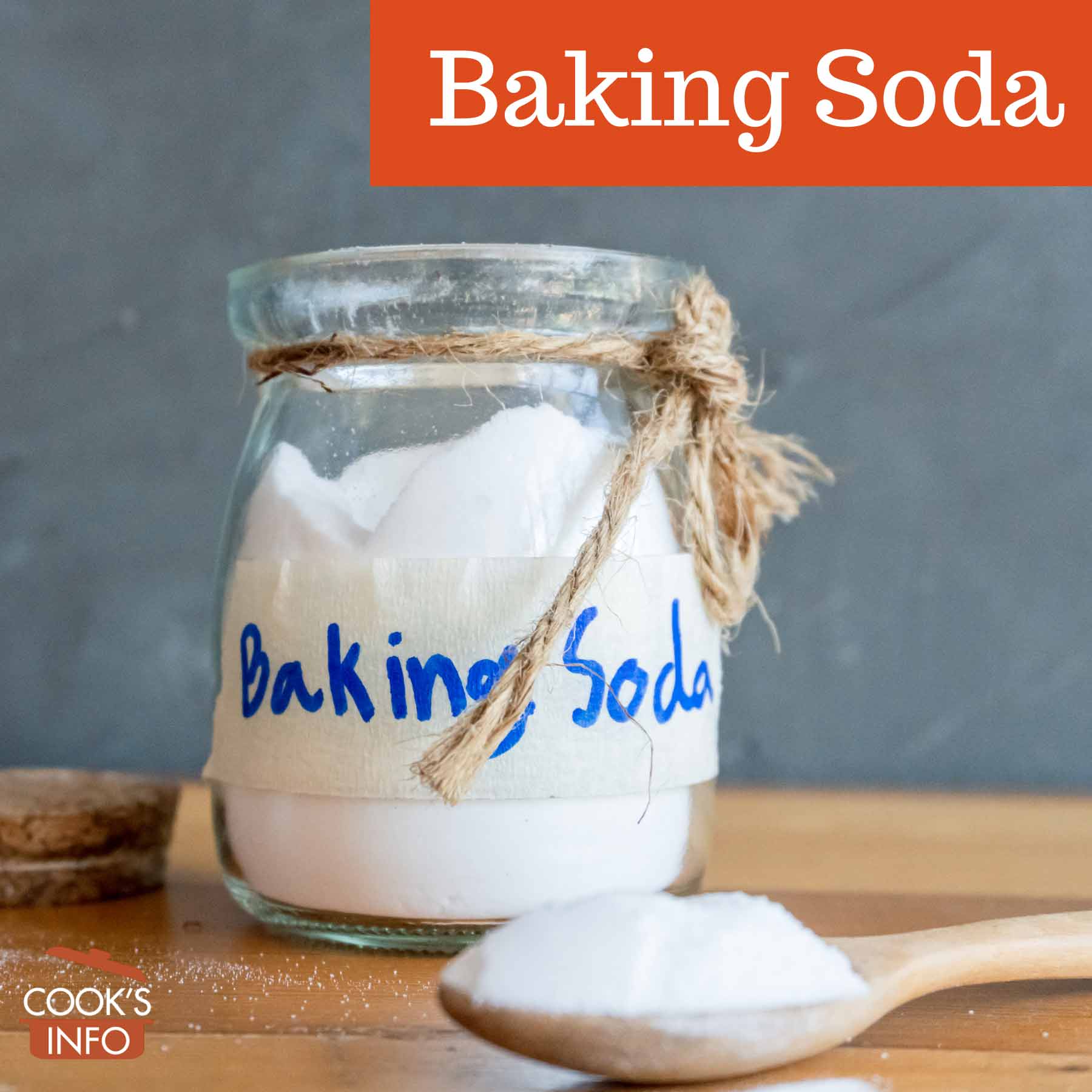 Baking soda (aka sodium bicarbonate) is a white, powdery alkaline substance. In the kitchen, it is primarily used to leaven baked goods. Even though in theory all pure baking soda should be the same, people can be very loyal to the brand names of it that they are accustomed to purchasing.

When a base such as sodium bicarbonate, which is alkaline, is mixed with acidic ingredients, it reacts. Depending on the base, it will create bubbles of carbon dioxide (the same gas that yeast would produce). [1]Not all bases will produce carbon dioxide when mixed with vinegar. For instance, lye (NaOH / sodium hydroxide) won’t. For instance, yoghurt, sour milk, buttermilk and molasses contain acid (lactic acid) that the baking soda can react with. (Yes, molasses has lactic acid.) These bubbles are trapped inside a batter and help the baked good to rise.

The non-chemical way of raising a baked good is by using yeast, and kneading the dough until a gluten develops strong enough to trap indefinitely the carbon dioxide exhaled by the yeast. Chemical leaveners such as baking powder and baking soda are obviously faster than all the kneading; which is why these baked goods are often called “quick breads.”

Sodium bicarbonate is inexpensive to produce, tasteless, non-toxic and easily purified in production. It comes from soda ash. The soda ash itself can come from a rock named “trona”, which is mined, or be made via a method called the “Solvay” process, which involves introducing carbon dioxide and ammonia into a solution of sodium chloride.

The chemical formula for baking soda is NaHCO3. Na is sodium, H is hydrogen, C is carbon, and there’s 3 oxygen atoms.

Baking soda reacts with acetic acid in a 1-to-1 mole ratio. A molecule of baking soda is converted in the course of cooking to a molecule of carbon dioxide gas also on a 1-to-1 ratio.

The lower the pH of an item, the stronger an acid it is, and the stronger it is, the faster it will react with baking soda, and the more carbon dioxide will be released. 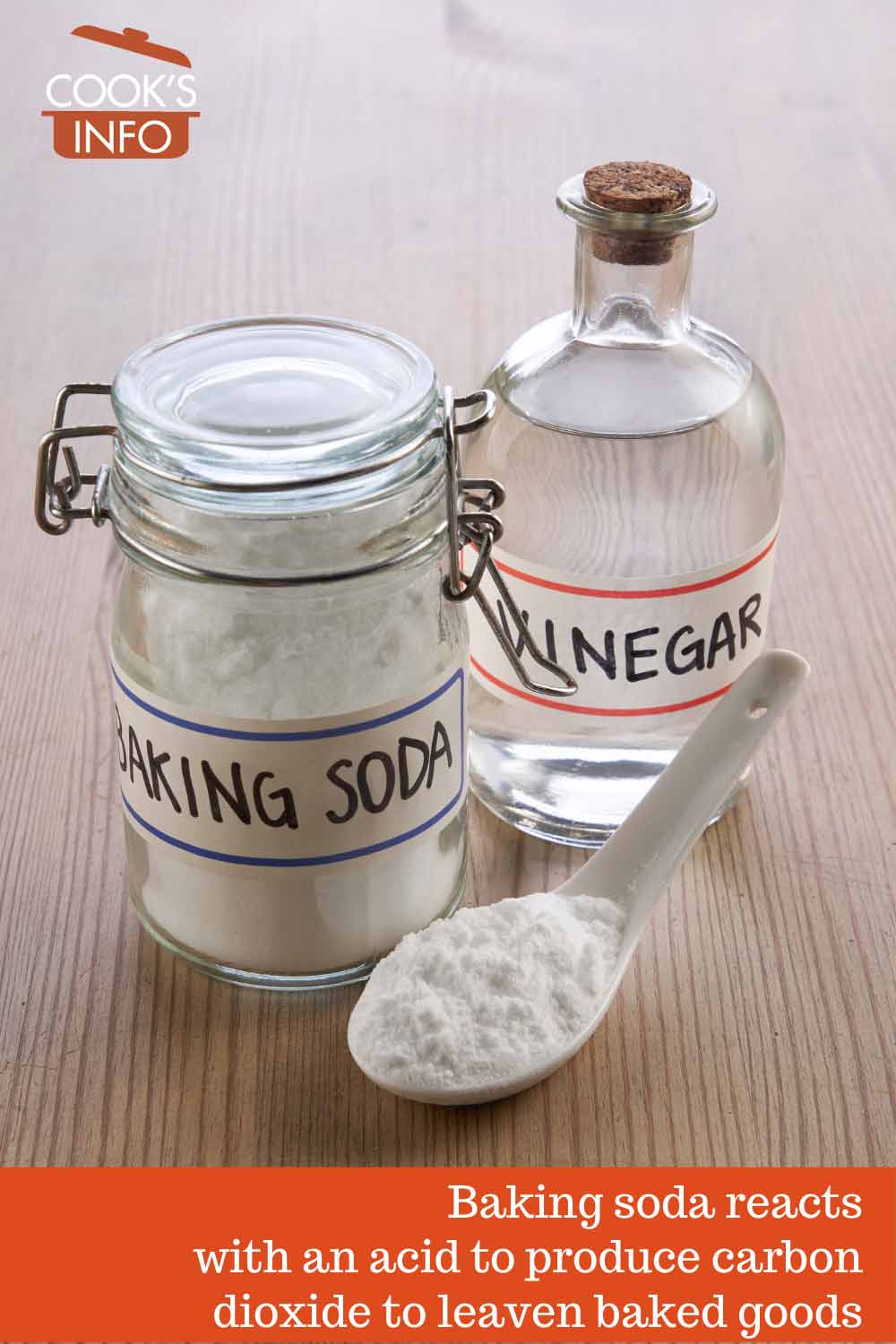 You never want to add too much baking soda to something you are making. It only gets neutralized in roughly the proportions mentioned below. Beyond that, when there is nothing to neutralize it, it will just remain unacted on and can give your cooking a soapy or bitter taste from its alkaline, and the food will have a coarse crumb.

Potassium bicarbonate (sodium-free; substitute measure for measure), but note that this substance tends to absorb moisture, react prematurely and can have a bitter taste;

Vegetables cooked in water mixed with baking soda don’t lose as much colour. English cooks used this trick in the 1800s, which caused the French to despair, because the baking soda tended to make the vegetables mushy.

We know now it also greatly speeds up destruction of vitamin C in the cooking process as well. So don’t do it— especially with broccoli (it causes the florets to disintegrate before your eyes) and asparagus (makes the skin tough, and inside, the asparagus turns into a gelatinous gloop.)

Best before dates can typically be disregarded (see freshness test below.)

A box of baking soda as sold may or may not have a “best before date” on it. Baking soda may lose potency over time, but that won’t necessarily have anything to do with the date printed on the box. Baking soda can be perfectly good for years past any suggested dates on the box. To test baking soda for viability:

If you get a reaction that is slow or produces only few bubbles, the potency of the baking soda is gone. The magic has left the room.

Using weakened baking soda has no health or safety risks — but it does mean that your baked goods will suffer in quality. Don’t be tempted to double or triple the baking soda used to compensate, as taste will be impacted.

Baking soda that has lost its potency is still useful as a household cleaner, so it does not have to go to waste. Just label the box for cleaning purposes, stow away with household cleaning supplies, and get a fresh box for baking.

American colonists got the idea of using a chemical reaction to leaven baked goods from the American Indians. Well before the start of the 1800s, the colonists would combine pearl ash with an acidic liquid in their cake dough.

By 1824, recipes for baking soda were common. Mary Randolph included a Soda Cake recipe in her book, “The Virginia Housewife”, in 1824.

“Dissolve half a pound of sugar in a pint of milk; add a teaspoon of soda, pour it on two pounds of flour—melt half a pound of butter. Knead all together until light. Pour it in shallow moulds and bake it quickly in a quick oven.”

Baking soda didn’t reach Ireland until the 1840s, so the famous traditional “Irish Soda Bread” is actually a relatively new recipe in the scale of things.

In 1846, two New Englanders named John Dwight and James A. Church started making baking soda in the kitchens of their own homes, which they sold in paper bags that they filled by hand. They called it “Saleratus” (aerated salt.) A year later, Dwight felt that business had taken off enough to expand. He choose a cow as part of his trademark logo because sour milk was the most common ingredient used to trigger the baking soda, and thus Cow Brand was born. (Apparently, they had an actual cow in mind — Lady Maud, a prize-winning Jersey cow at the Philadelphia Centennial Exposition.)

In the late 1990s, the Cow Brand boxes seem to have disappeared altogether and have been subsumed by the Arm & Hammer branding. 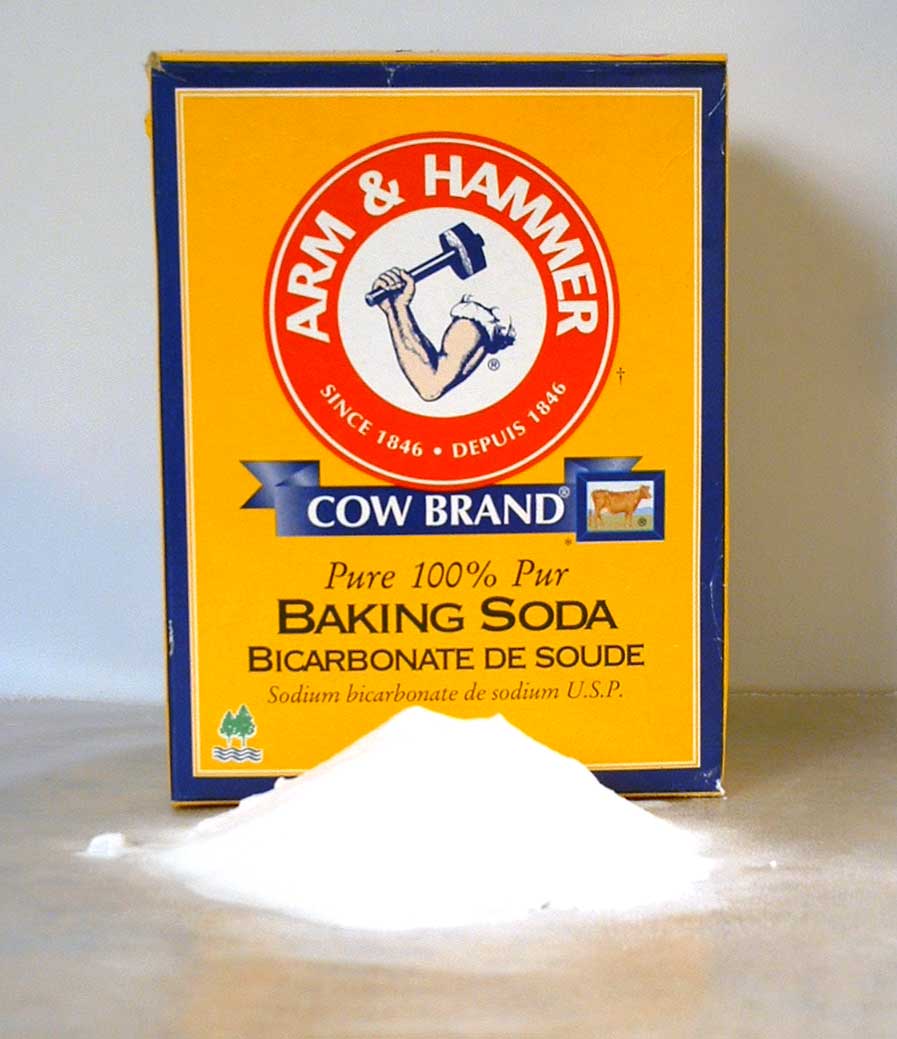 Baking soda causes chocolates such as cocoa powder to redden when baked — thus the name Devil’s Food Cake because the cake has gone red in the heat.

The old home remedy of putting baking soda on a bee sting was actually sound scientifically: Baking soda, being alkaline, would help to neutralize the pain of the bee’s sting, which is acidic.