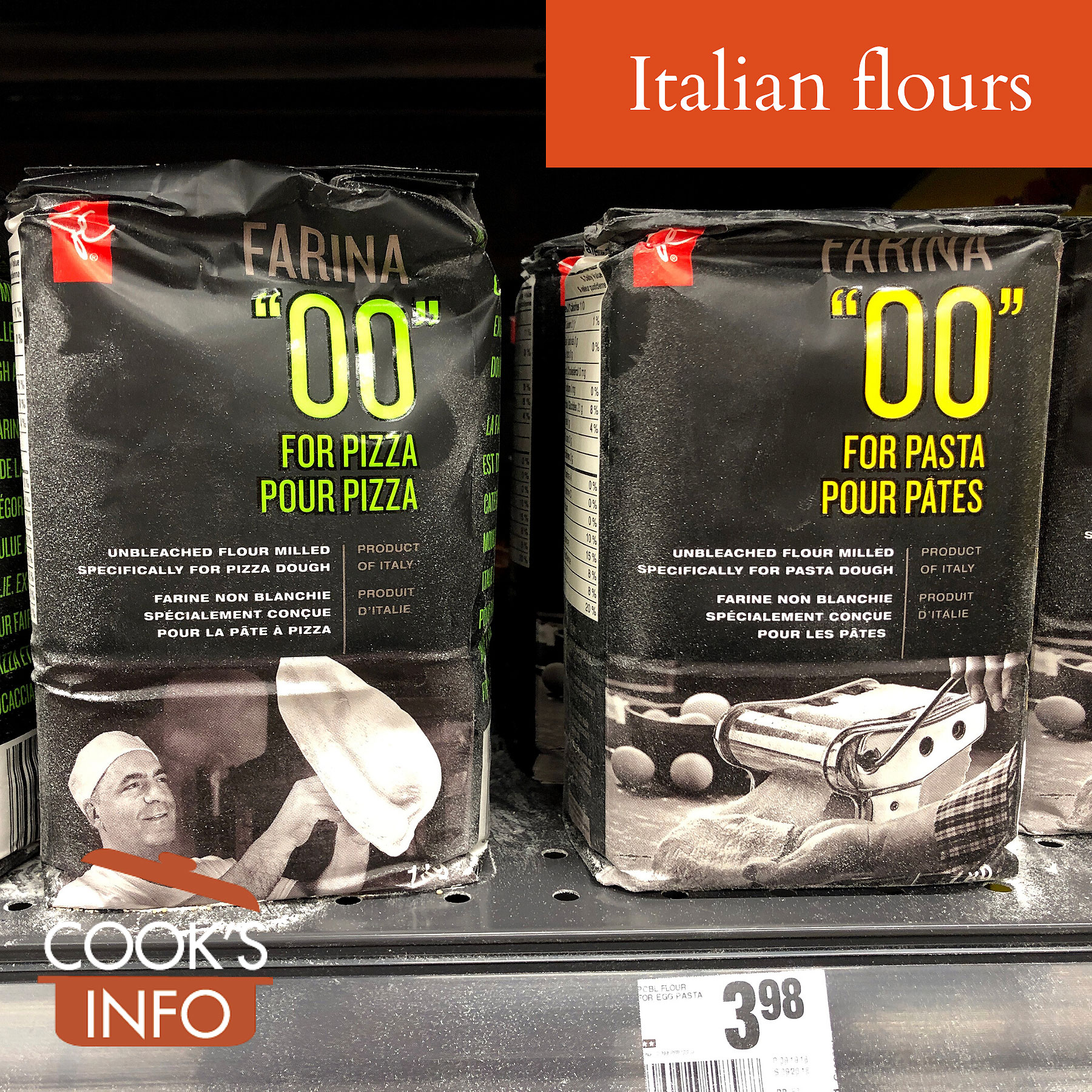 The grading is based on measuring the ash content of the flour (just as it is for French flours and German flours.)

Grano duro flours are slightly yellowish and have a more granular texture. They are used for pasta, and in the south of Italy, for some types of bread. They are often also called “semolato di grano duro” or “sfarinato di grano duro.”

In Italy, as in much of Europe, soft wheat is the norm. 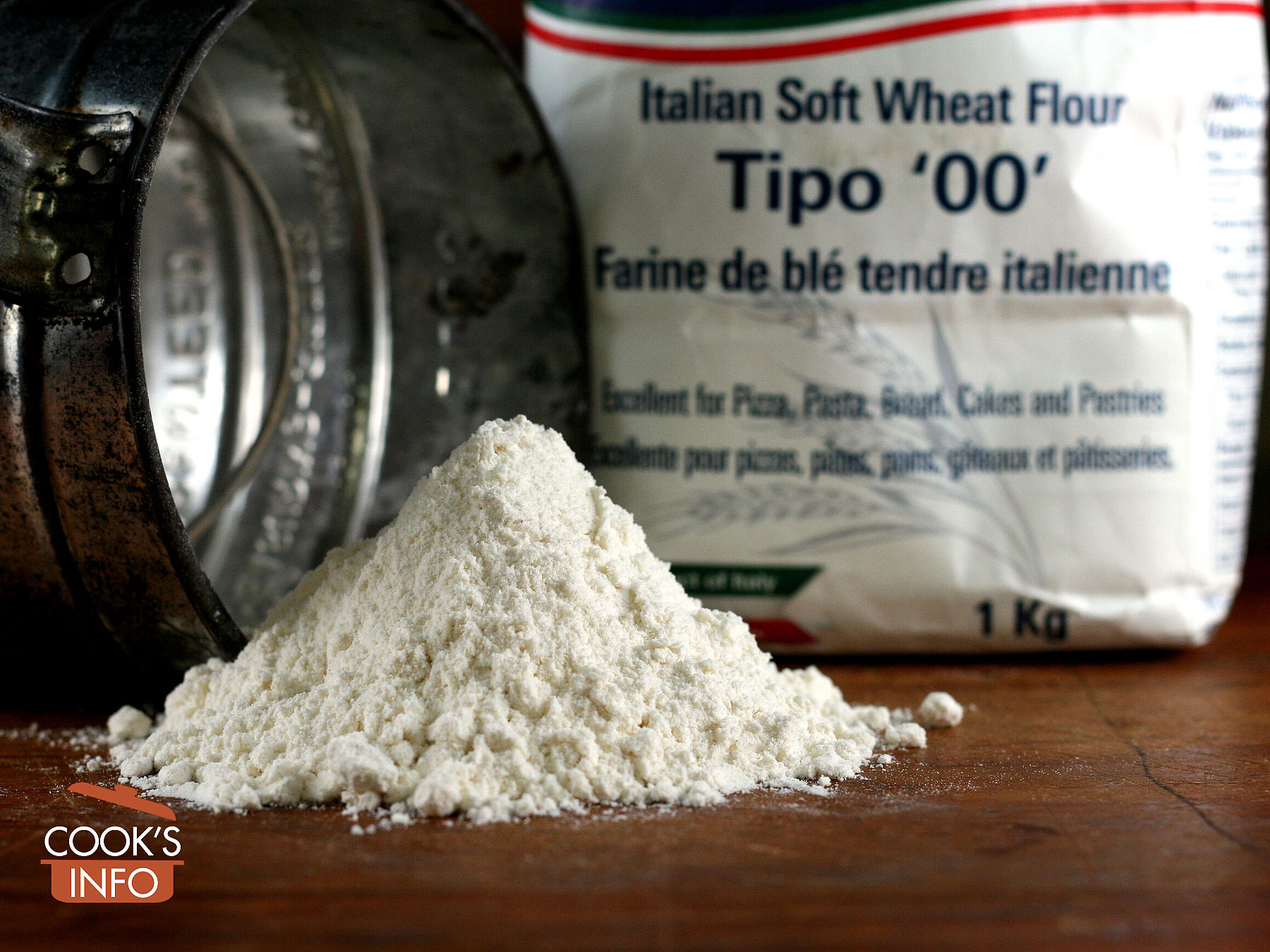 They are the softest, finest, Italian flours; they are very finely ground like a fine powder and are very white. They have the most refinement done to them and the least fibre remaining.

The “grano tenero” flours in category 00 are more in the range of “cake flour” in terms of protein content. They will not create much gluten.

The protein will range around 9% for the pure soft wheat flours.

Every mill in Italy makes several different kinds of type 00, as flour in this category can be as just soft wheat, or blended with some hard wheat (see “Farina Manitoba” below.)

The protein may range up to 11 % for the ones with some hard wheat flour blended in, but not much higher. Consequently, at bakeries these flours are often blended with stronger yet flours for bread making.

This category of flours is more in the range of a strong all-purpose or lower protein bread (strong) flour. They are a bit less refined than type 00, use about 70% of the grain, and are consequently a bit darker.

These flours are a bit darker and coarser than Type 0.

These flours are a bit darker and coarser than Type 1.

This is the darkest and coarsest Italian soft wheat flour. It uses the whole grain.

This comes as both a 0 and 00 flour. Made from the Manitoba variety of hard wheat, as grown in Canada and the States, it has a high protein content.

Essentially a strong, highly-refined white bread flour, it is mostly used as a flour to strengthen other flours, often being mixed in right at the mills.

Such strengthened flours are sold as special strength flours — the flours may be marked as being for “pane, pizza, dolce” (bread, pizza, baked sweet goods.) At other times, the presence of Farina Manitoba may be indicated by a W on the package (the W is a value used on “Chopin Alveograph” graphs in Europe that measure the quality of gluten in a flour.)

The name “Manitoba” is applied to it by Italians only. People in the Canadian province of Manitoba would have no idea what they meant — nor is it made only from wheat grown in Manitoba.

Note you can also buy specialty flours, such as “farina speciale per pizza, dolci e pasta.”

In North America, for tipo 0 flour for bread or pizza, use all-purpose.

In North America, for flour strengthened with Manitoba flour (when the recipe calls for flour with a W in the name), in the States, use bread-flour if you have it, or all-purpose. In Canada, the all-purpose there is stronger than American all-purpose, so just all-purpose will do.

In North America, for soft flour, use regular flour, or cake flour.

If you are making bread: in North America, some suggest 3 parts all-purpose flour to 1 part cake flour; in the UK, 3 parts of bread flour to 1 part plain flour. Bread (strong) flour on its own is probably pretty much too strong for almost any Italian recipe. The absolute highest protein content you’d probably want in a flour for Italian bread would be 12 to 12.5%, tops.

Flour regulation in Italy is (as of 2020) governed by the Italian presidential decree of 2001.

Following are the other articles.

Italian wheat traditionally produced soft (or “weak”) flours. To compensate for this, a stiff starter called a “biga” was used that would reinforce the bread dough. Now that strong North American flours are being used and blended in, the starter, which is still called a “biga”, has evolved to be weaker so as not to combine with the stronger flours and make the bread dough too stiff.

This web site generates income from affiliated links and ads at no cost to you to fund continued research · Information on this site is Copyright © 2022· Feel free to cite correctly, but copying whole pages for your website is content theft and will be DCMA'd.
Tagged With: Flour, Italian Food