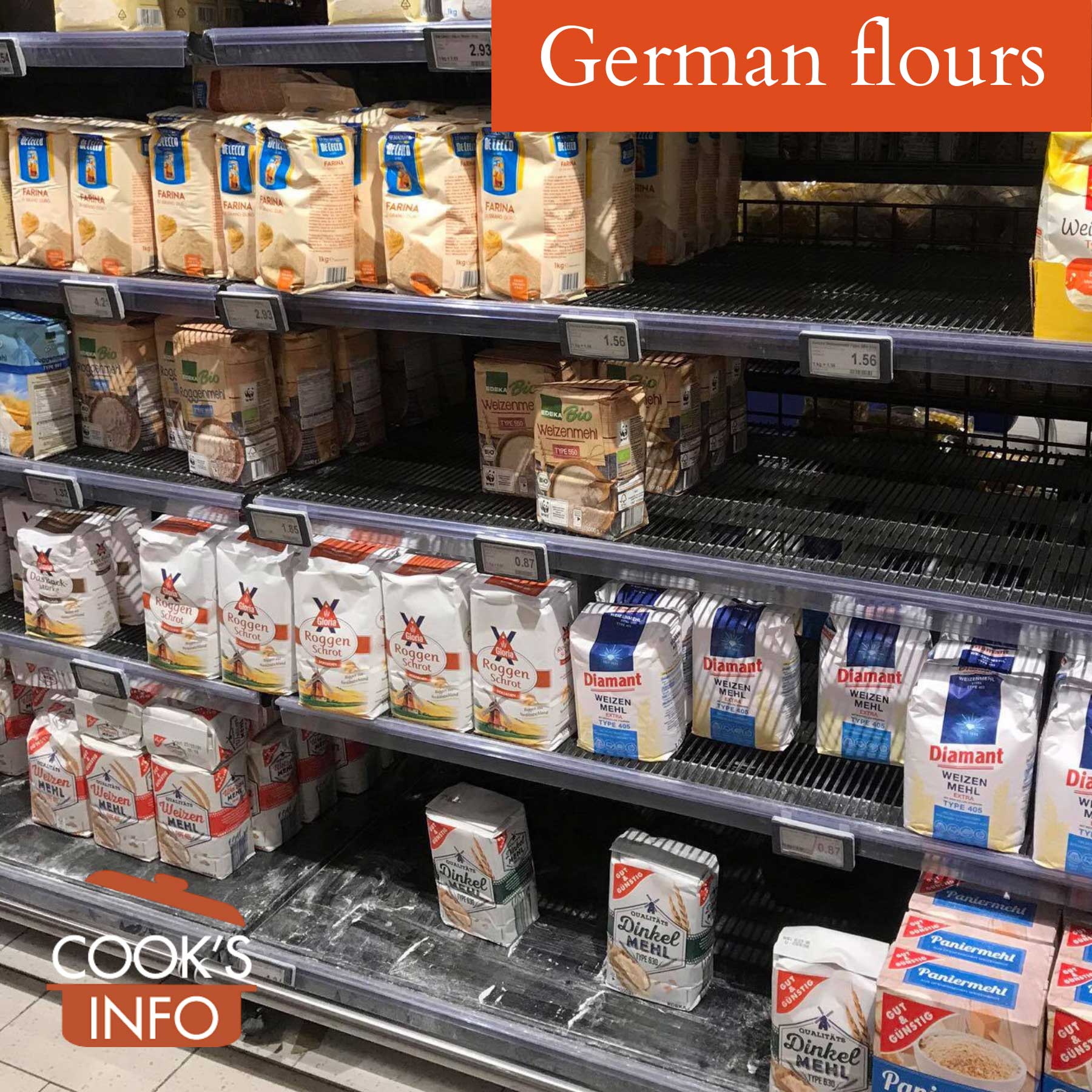 In Germany, a wide variety of grain flours are sold and used. Unlike other Western countries, where anything other than a wheat flour is a “novelty” or “health” flour, in Germany rye flour and spelt flour are still used relatively commonly.

The common size of bags of flour are the smaller ones typical of Europe, rather than the typically larger bags sold in Canada or America.

The two types of flour most commonly used for bread in Germany are wheat flour Type 1050 and rye flour Type 1180.

The German flour grading system is also used in Switzerland. It is not, however, identical with the system used in Austria.

In Germany, flour is graded by “type numbers” (“Mehltypen”) which indicate the ash content of the flour.

The higher the type number, the more minerals there are in the flour to form ash if the flour is burnt.

This grading system has been in effect in Germany since 1934. The grading system was revised and updated in 1992 into what is now called the DIN standard 10355 (DIN stands for Deutsches Institut für Normung e.V. — German Institute for Standardisation.)

The type number does not refer to a specific grain: the same type numbers can be applied to flours as various as wheat, spelt, rye, etc.

Some of the wheat flours will be ground from low-protein soft wheat; others from higher-protein hard wheat. 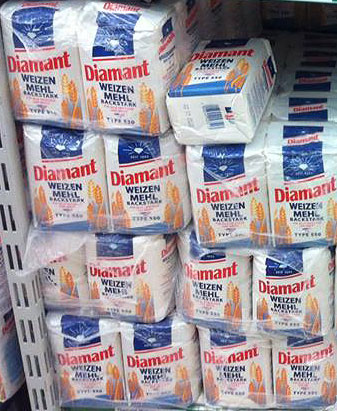 Type 405 is a very fine, low-gluten content wheat flour made from soft wheat.

It is the closest German flour equivalent to American cake flour. However, type 405 has a protein content of 8 to 10% compared to cake flour, which will have 6 to 8%. Consequently, some people say it can be a challenge to make a cake or pastry recipe written for English speakers with German flour, as the German protein content is too high.

This is not good for yeast-risen products, as it won’t do a great job of developing enough gluten to hold the gasses in to rise the dough.

Type 405 is the most popular household flour in Germany. It is classed as “type W480” in Austria. 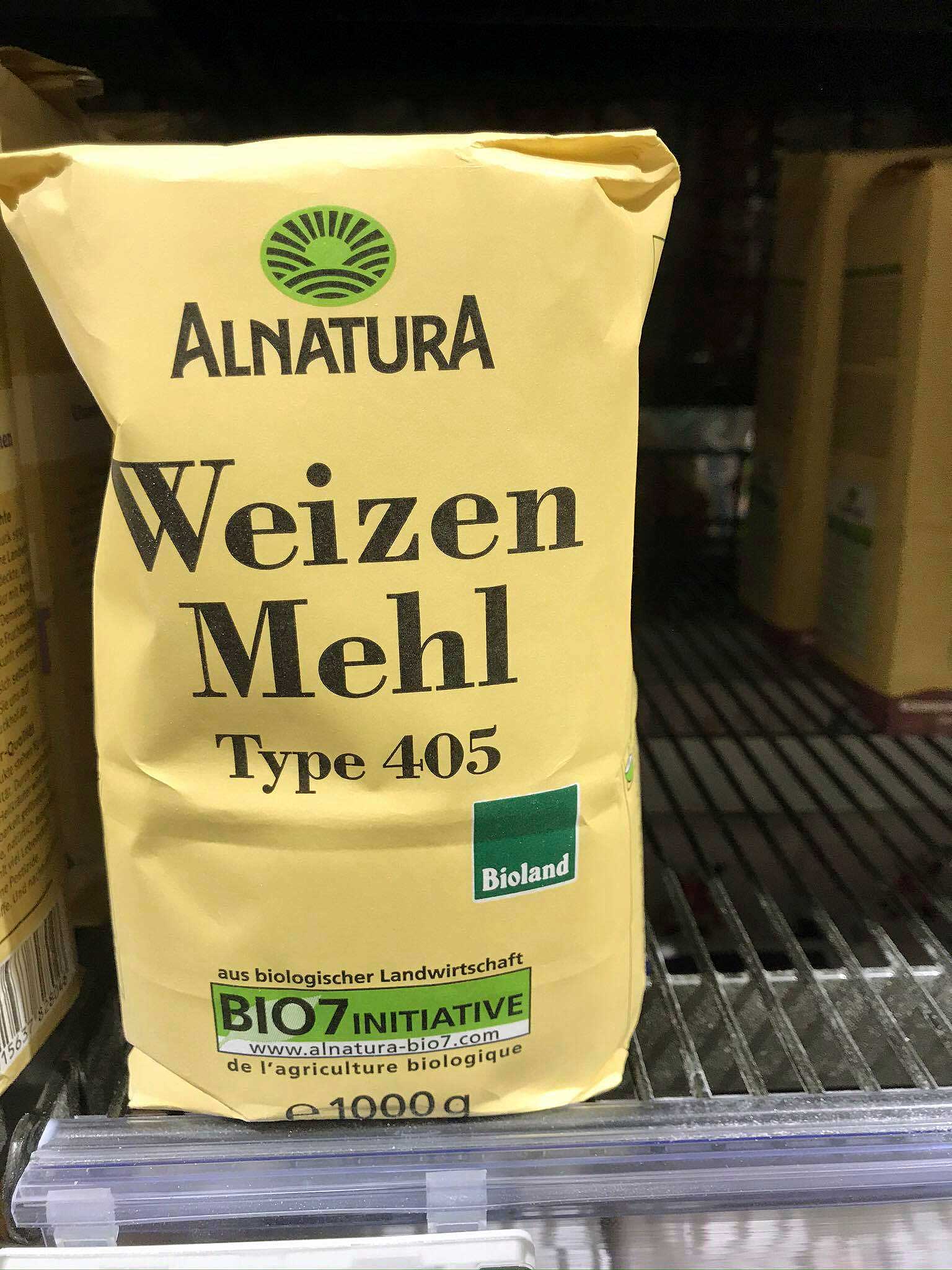 Type 550 is a wheat flour with medium gluten content that is good for baked products leavened with yeast. It is ground a little finer than North American all-purpose or British plain flour, but otherwise, with a protein content of 9 to 11%, it is Germany’s equivalent. It may be bleached or unbleached.

As it is all-purpose flour, it is understandably popular with home cooks (though note that type 405 above is more popular), but is typically not used by professional bakers. Amongst other things, it can be used for homemade white bread. 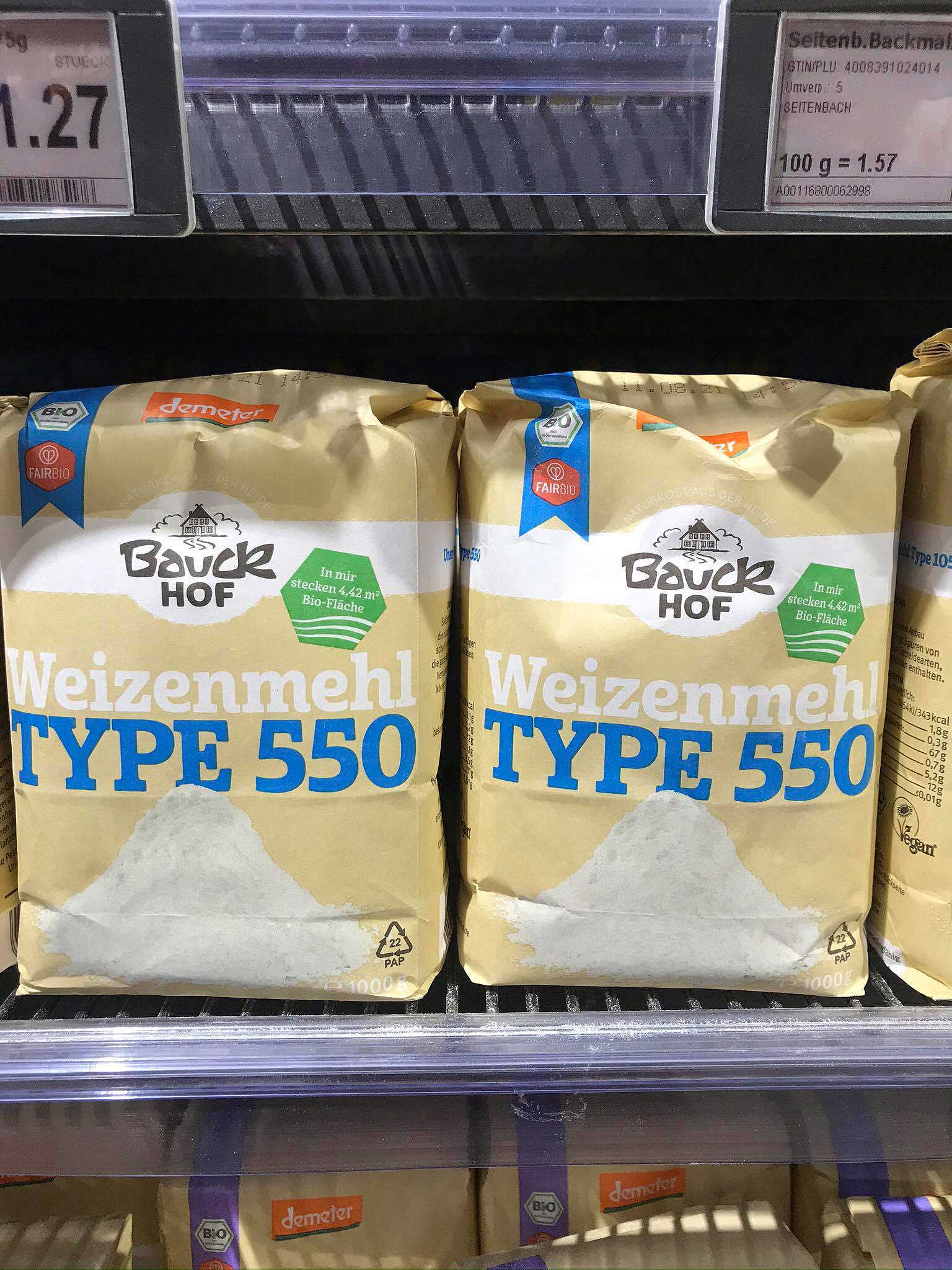 Type 812 wheat flour, with a protein content of 11 to 13% is a higher gluten content flour and is Germany’s equivalent to English or American “bread flour.” It is made from a hard wheat. It will be a pale yellowish colour when freshly ground, turning an off-white as it ages. It will feel just slightly coarse in your hands.

With the higher gluten content, it is good for yeast-risen breads. Sample uses include lightly-coloured breads and rolls, and artisan breads such as “farmer’s bread” (“Bauernbrot”). In the kitchen or bakery, it is often used in combination with rye flour when making breads that are a combination of rye and wheat flours.

It is not as commonly found in German supermarkets as other flour types. 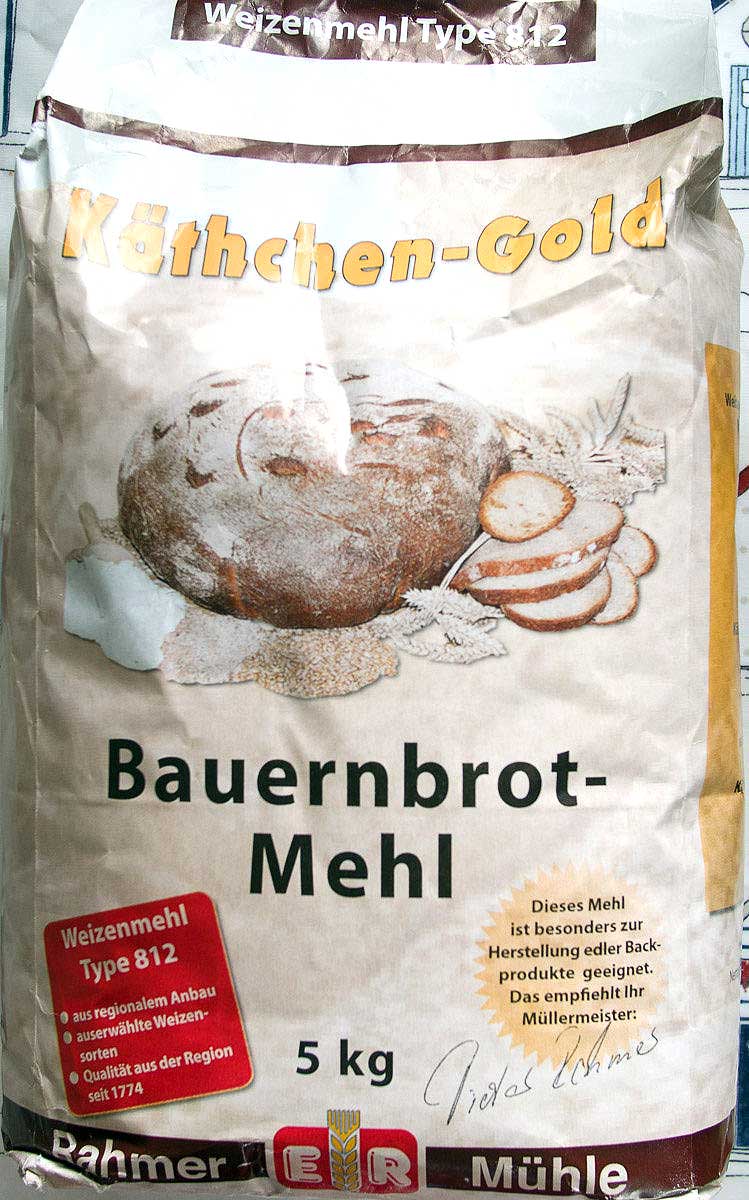 Type 1050 wheat flour is darker than North American unbleached flour. It is a high-gluten flour made from hard wheat, with more of the wheat grain remaining in the flour that the smaller type numbers. It will have a gluten content of 13 to 14.5%.

It is often used in combination with other flours for darker-coloured breads. It is also good for very stretchy doughs such as that for pizza and bagels. 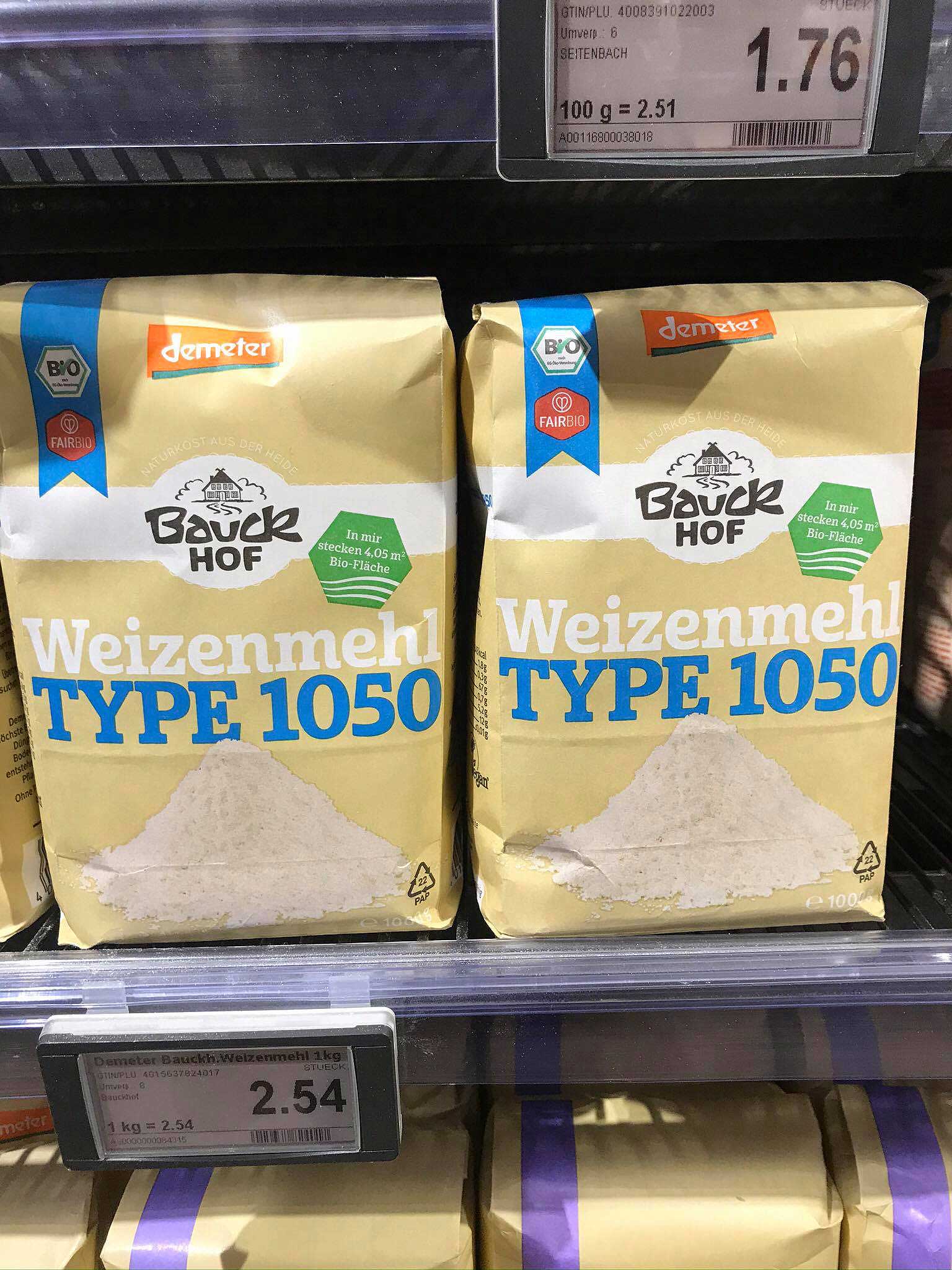 This will require a bit more water than other lower-number flours when making bread.

German full grain wheat flour has no type number assigned to it. The whole, complete wheat grain is used in making the flour. 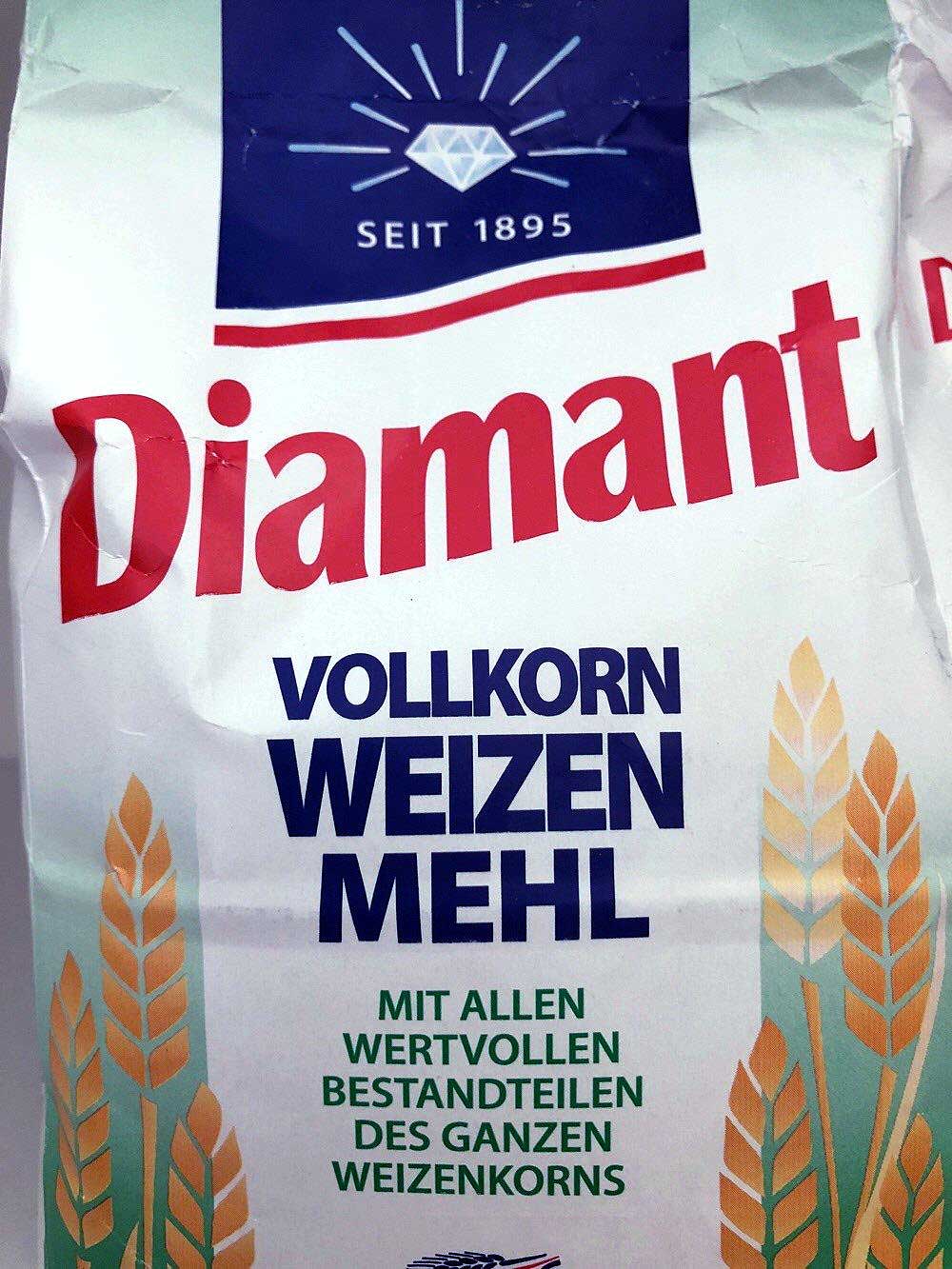 Several different grinds and “ash contents” are available, labelled by “numbers” (as is common with some other European flours.)

The higher the number, the darker the rye flour.  For instance, type 1150 is a medium to dark rye flour. 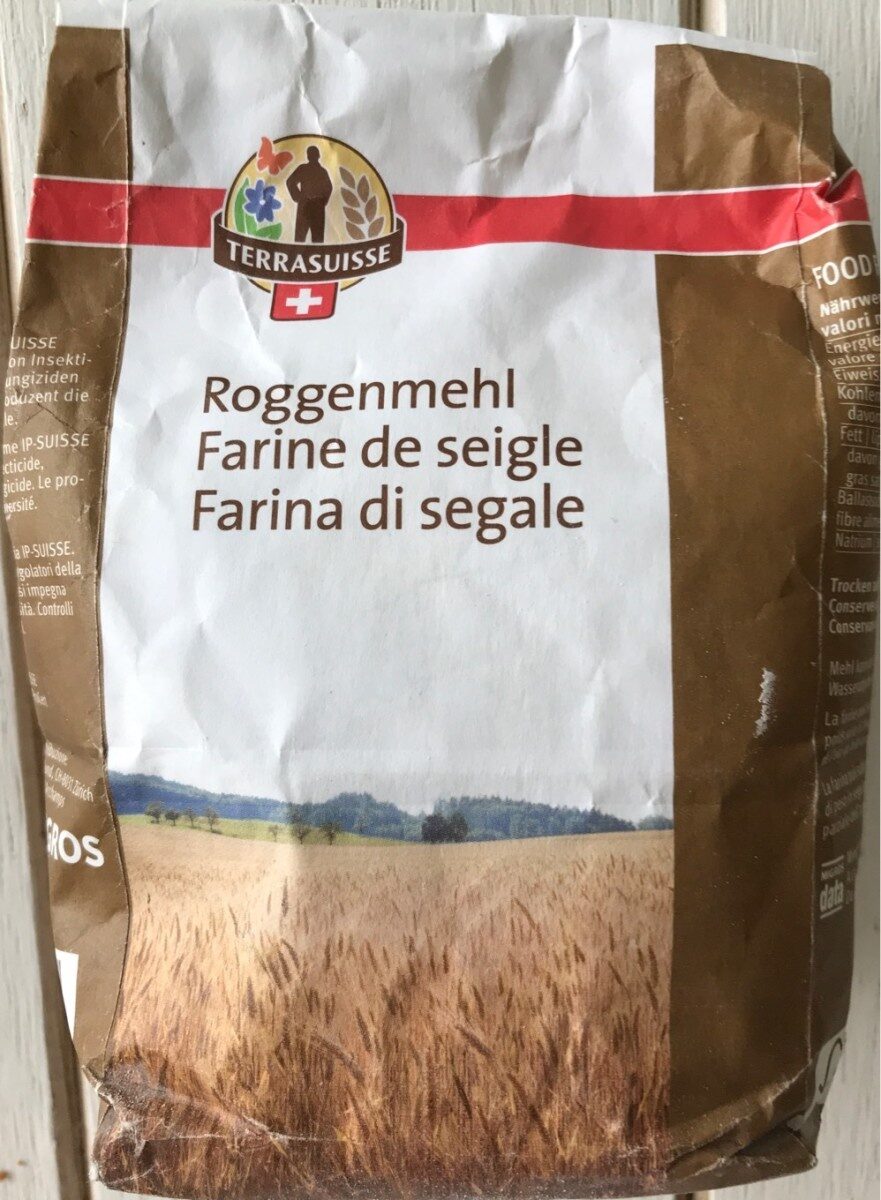 It is commonly sold in everyday flour sections of supermarkets along with other flours. Its use is more common than it is in English-speaking countries. 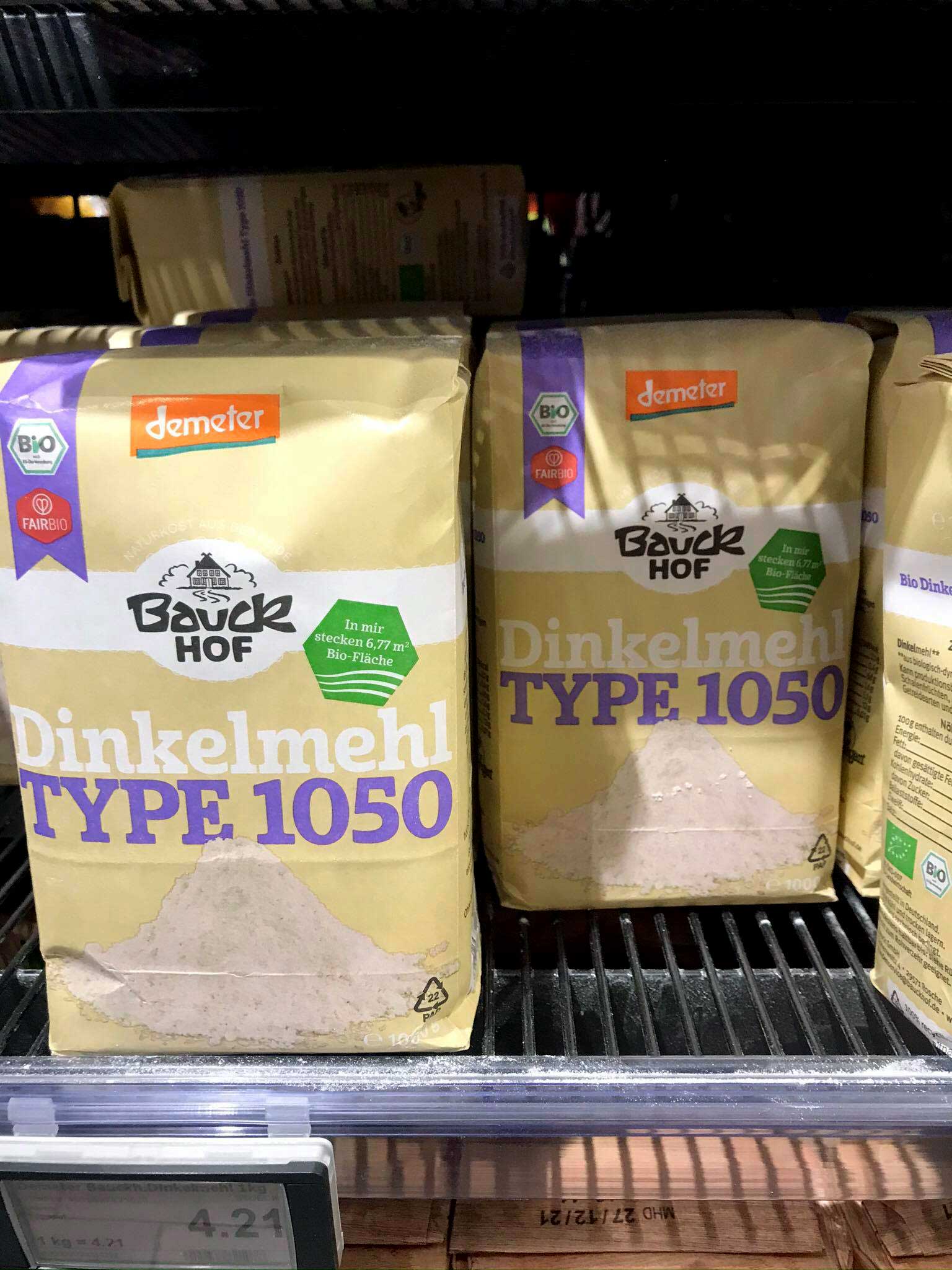 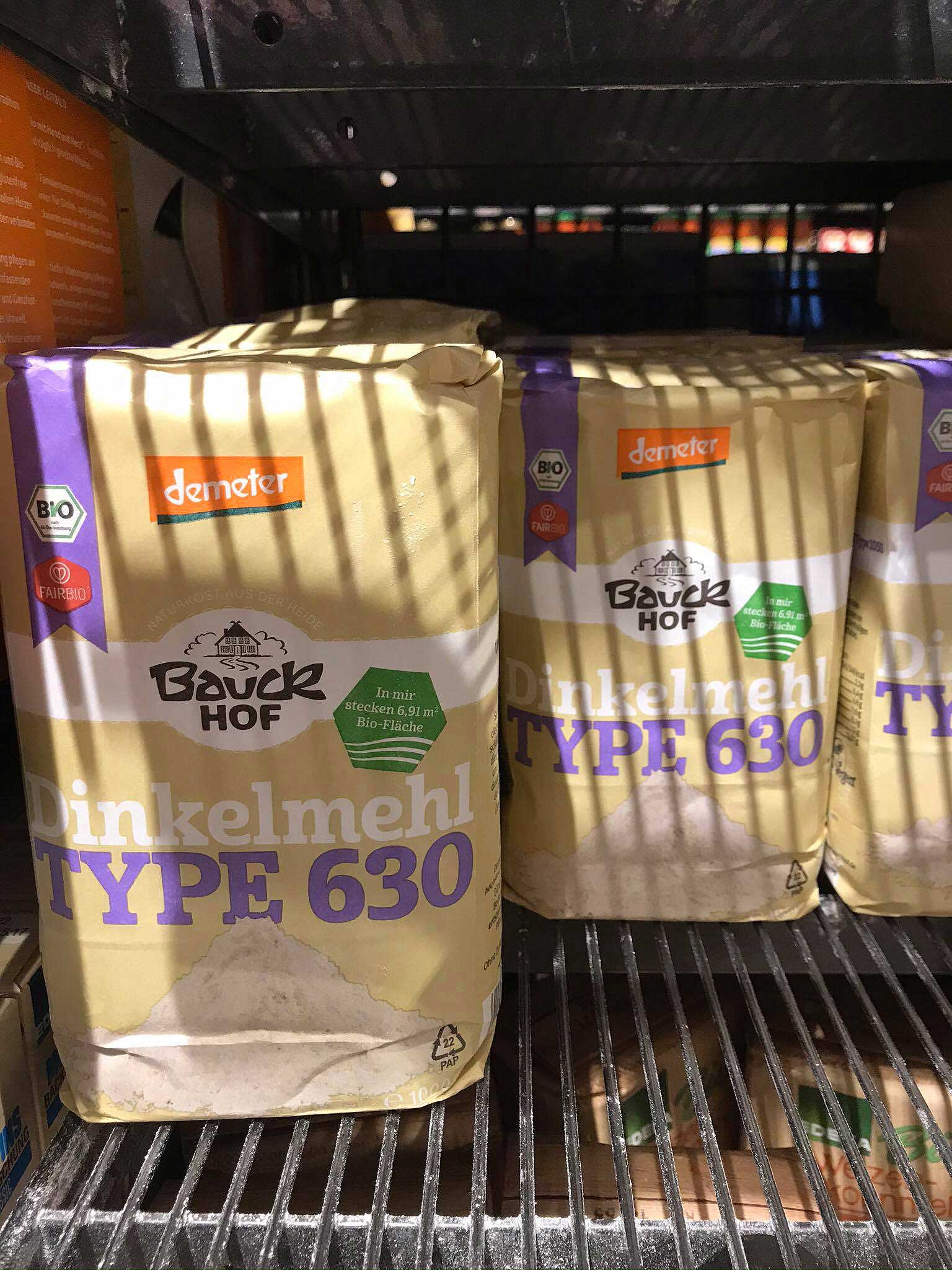 The following terms in Austria describe not how whole grain a flour is, but rather how finely it is ground regardless of how much of the whole grain is left in it. [7]Mehlkunde: glatt, griffig, universal. Vienna, Austria: Servus Magazine. Accessed October 2020 at https://www.servus.com/rezepte/mehlkunde-glatt-griffig-universal/

“Doppelgriffiges Mehl” means literally “double gripping flour.” It absorbs liquid a little more slowly than the other two grinds. Good for flouring surfaces with, and dough that needs to rise a good deal and maintain a firm structure while doing so. 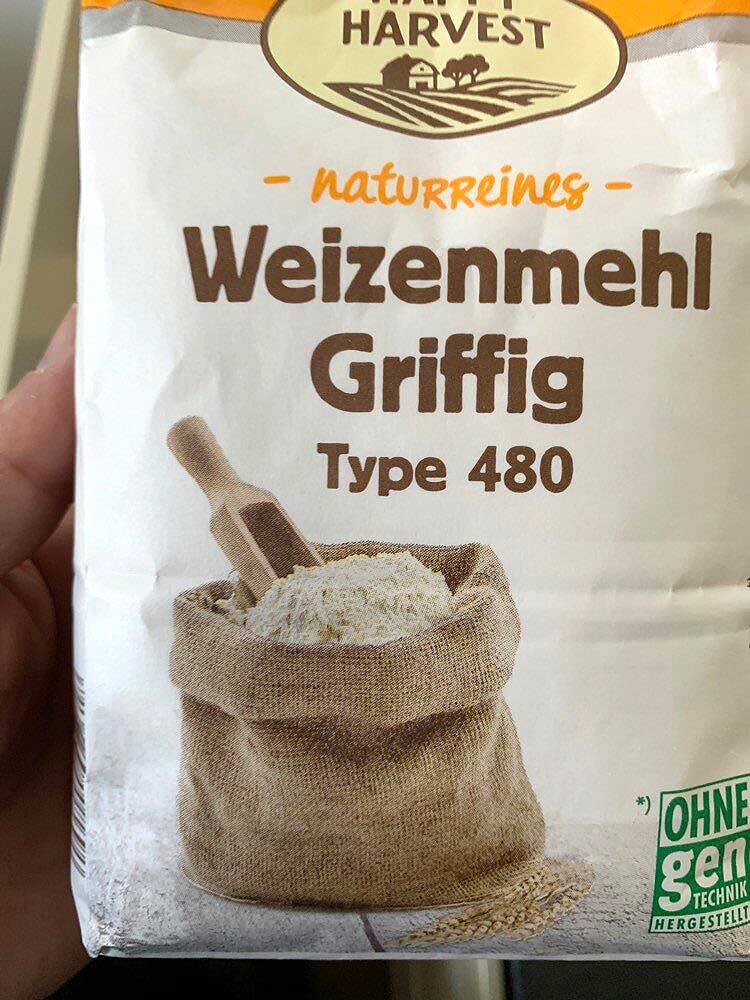 Roughage in German is “Ballaststoffe”. The Germans refer to ash content (which would be “Aschegehalt des Mehls”) as “Mineralstoffgehalt” (mineral content).

This web site generates income from affiliated links and ads at no cost to you to fund continued research · Information on this site is Copyright © 2023· Feel free to cite correctly, but copying whole pages for your website is content theft and will be DCMA'd.
Tagged With: Flour, German Food, Swiss Food