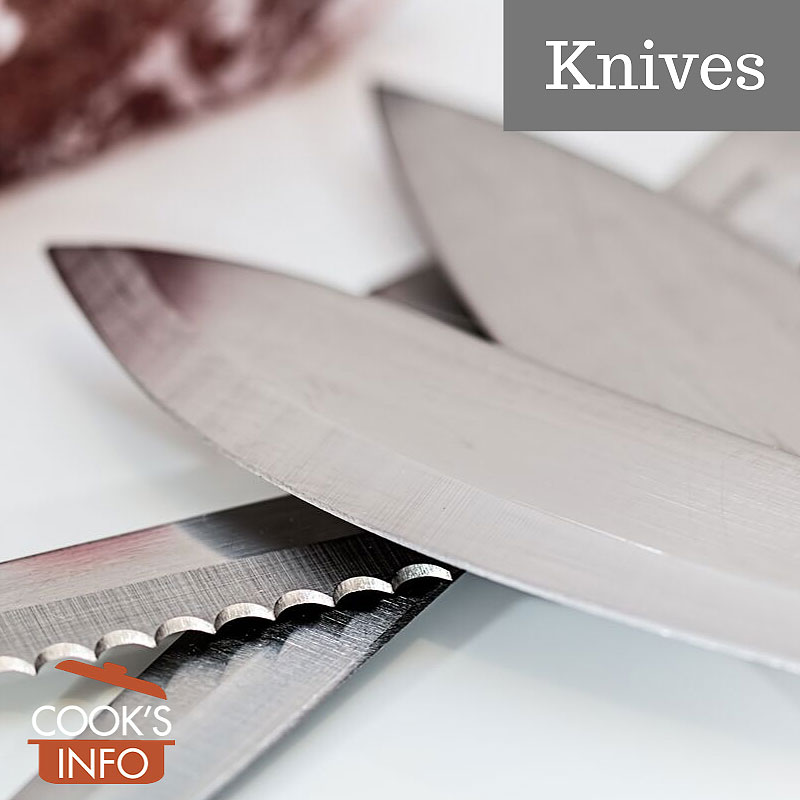 A knife is an implement for cutting, chopping, scraping, spreading and smoothing. It is used both in the kitchen and at the table.

It consists of a blade attached to a handle. Most knives have the handle at the end, and that’s where your hand applies pressure and energy. A few kinds have the handle over the blade, so that your energy comes down right on top of the blade. Some people consider wooden handles less sanitary than metal, plastic handles or plastic impregnated wood, because they feel that the wooden handles can absorb bacteria (see however, the debate about wood in the entry on chopping boards.) Others dislike wooden handles because they feel that they have a shortened lifespan if the knives are regularly put through the dishwasher. Many people base their opinion of a knife on the handle alone.

Brands make different qualities of knives. Some are stamped, some are forged. Some are lighter, some have more heft. You don’t have to have a matched set of knives from only one brand, though many people base their purchase decisions on how much they trust a particular knife brand.

A knife is something very personal that you have to feel comfortable with. Foodies can hector people all they want about how they should be using chef’s knives instead of paring knives, but won’t get them to switch to a knife that they distrust. Some regard a knife as something that has to last them a lifetime. Others regard it as a tool that they’ll replace when they’re no longer happy with it — if they get ten years out of it, they feel the knife owes them no money, and they are ready for a change, anyway.

There are two types of cutting, push and pull:

Some knives, such as a chef’s knife, can be used for both push and pull cutting; others are used for either pull or push.

It’s hard to generalize about what metal is best for knife blades, as so many alloys are now possible. Carbon steel generally sharpens up well, but its appearance will eventually discolour so that the blade takes on the colour of gun metal. Acidic food in particular will discolour carbon steel blades. Some people, though, like the patina they take on.

Stainless blades will keep their appearance better, but when made as hard as carbon steel, they are harder to sharpen, and can chip. Some are carbon steel to provide a better knife edge, and covered in stainless for a better facing.

French style knives tend to be triangular with just a bit of a curve. German style knives are triangular, too, but have a more pronounced curve on the lower edge of the blade that allows for more rocking. Japanese-style knives ones have a sudden curve close to the tip. Japanese knife aficionados prefer carbon steel.

Rockwell Numbers are used to indicate how hard the metal in a knife is.

Knives need to have two angles, referred to as “bevels.” The angles on each side are not necessarily the same. It may be 9 or 12 degrees on one side, 18 or 24 degrees on the other. The finer the bevel on the knife, the less long it will hold its edge. Harder steel holds its edge longer, but is harder to sharpen.

Sharpening is both a science and an art. Some knife aficionados advise that you sharpen your knife after every single use. For these people, the science of sharpening becomes a hobby, and their knowledge of it part of their self-identity. They are appalled that some people consider knives mere “cutting tools.” Such traits seem for the most part to be found in men. Sharpening knives is a very “macho” thing: many men like to spar by bandying technical terms and Rockwell numbers at each other.

Most people, however, when buying knives are the exact opposite. The thought that the knife will one day need sharpening doesn’t cross their minds. Instead, they think about how much they want to spend on the knives overall at that moment, without allowing for a sharpening system. A sharpening system becomes an afterthought a few years later. Many people solve the sharpening problem by locating someone local to whom the knives can be taken to be sharpened. This is probably best because if you’re going to sharpen very expensive knives yourselves, you have to take time to learn what you are doing. Serrated knives particularly require special knowledge to sharpen them.

In storage, knives should be kept in a knife block or on a magnetic holder. If the knife blades bang together in a drawer, they can be damaged or dulled. Storing knives in a drawer is also dangerous for someone fishing around in the drawer.

In many North American cities, the bell of the approaching knife sharpening truck is as much a sound of summer as is that of ice cream trucks. These trucks disappear in the winter, but their sound re-appears the next year as one of the first harbingers of spring.

Those opposed to putting knives in a dishwasher say that knife edges will go dull in a dishwasher. Some reputable knife companies such as Henckels, though, say good ahead and put your knives in a dishwasher: just make sure that the blade edges won’t bang against things. Still, other problems may arise: wooden handles may look like worn over time, and if the handle is joined with bolts, they may come loose. Many say though, that they don’t regard a knife as an heirloom item, and are happy to put theirs through the dishwasher for the convenience and replace as necessary years down the road.

“[In nineteenth century London] ‘Knives to Grind’ men carried a grinder powered by a small foot-treadle in their carts. With this they sharpened scissors and knives for housewives (3s for a dozen able-knives, or carving knives at 4d each in 1827), honed cleavers at markets, and even whetted penknives for office workers in the days before steel-nibbed pens were common. Until the invention of stainless steel, knives could not be immersed in water, as the pin holding the blade to the handle rusted and the knife fell apart. By the 1850s, men walked the streets [of London] with patent knife-cleaning machines: the knives were inserted blade first into a box and when a handle was turned the blades were buffed by emery paper.” — Flanders, Judith. The Victorian City. London: Atlantic Books. 2012. Page 148.

Perhaps no other kitchen item has as much superstition attached to it as a knife:

A knife is never truly yours, some say, until it has bitten you and tasted your blood.

Parker Bowles, Tom. How to keep your edge: Twenty-five years in the making… The Stradivarius of kitchen knives. London: Daily Mail. 18 September 2010. 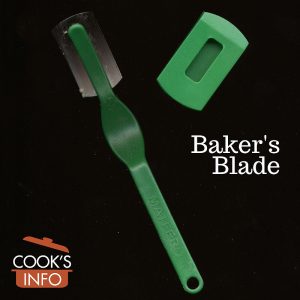 A baker's blade (aka lame) is a sharp cutting implement used to make decorative slashes in bread dough without pressing the dough down and deflating it. The slashes also serve the function of directing steam out of the bread while baking. 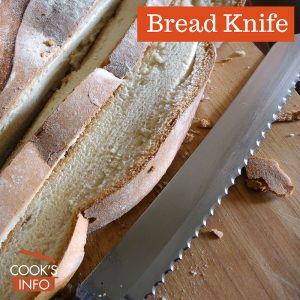 A bread knife is a long knife with a serrated (or "scalloped") cutting edge. What a bread knife will do is enable you to slice bread without squishing it. Its large serrations allow it to grip the crumb and the crust of bread to cut it, without having... 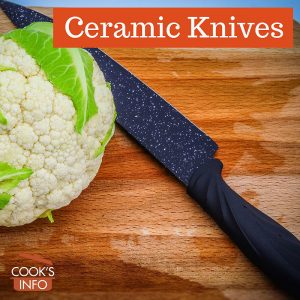 Ceramic knives have their blades made from zirconium oxide, which is the second-hardest known material after diamonds. The blades can stay sharp for years without sharpening, and won't rust or stain. 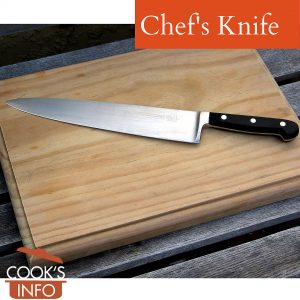 A chef's knife is an all-purpose knife for cutting, chopping and mincing. Once you learn how to take advantage of a chef's knife, using one can be faster for some tasks than the time needed for the assembly, use and clean-up of a food processor. Chef's... 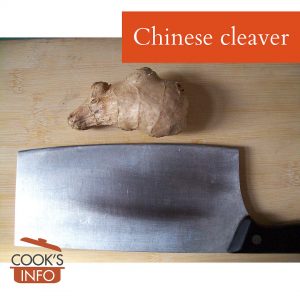 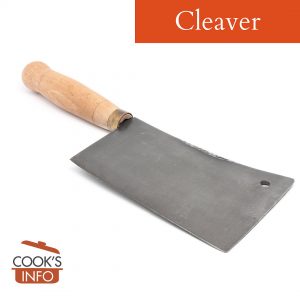 A cleaver is a heavy, rigid knife with a large rectangular or square blade. The blade, about 15 cm (6 inches) long, can be made of stainless steel or high-carbon steel. Its weight allows the knife to pick up momentum as you swing, so that in effect... 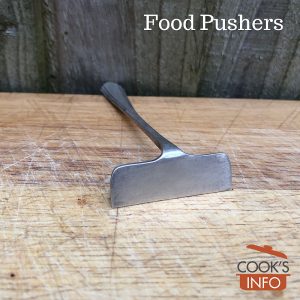 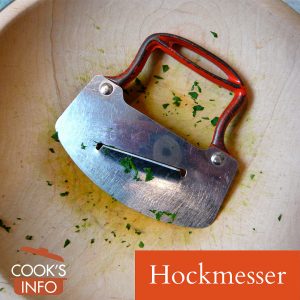 A hockmesser is a Yiddish word for a knife with a single, slightly curved blade, and no side handle. Instead, the handle is on the top; you press down as you chop. In this, it is similar to a single-bladed mezzaluna . It is used in conjunction... 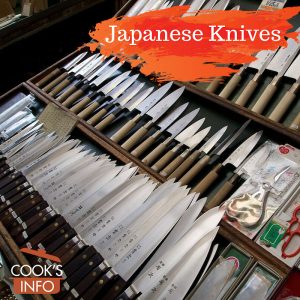 Japanese knives are prized for their craftmanship and technical refinement. Some Japanese knife makers have been in business 400 to 700 years. 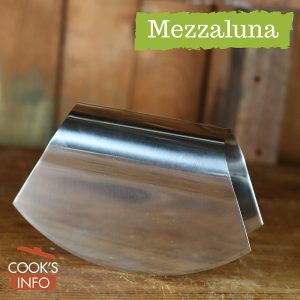 A mezzaluna is a half-moon-shaped blade designed to be rocked from side to side. Some models have one blade, some are double-bladed. They are used for mincing food items, particularly herbs and nuts. 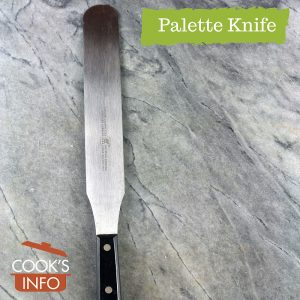 A palette knife is a wide, flat knife with a rounded tip meant for lifting, spreading, and smoothing, making it more like a spatula in terms of its purpose. 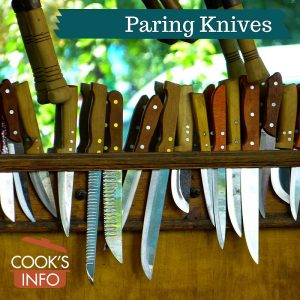 A paring knife is a knife with a small blade for working with small objects. Its tapered blade ends in a sharp, fine tip. The cutting edge of the blade can be straight or serrated. The handles can be wood or plastic. 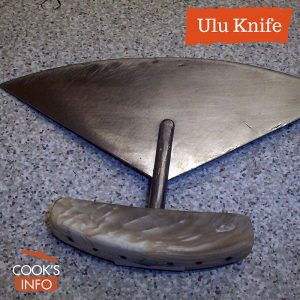 An ulu knife has a blade about 15 cm (6 inches) long, counting the curve, and about 10 cm (4 inches) tall. The handle is on top of the blade. The design puts the force of your hand directly above the centre of the blade. 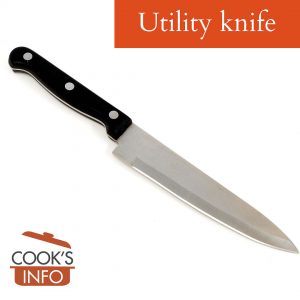 A utility knife, in culinary terms, is a larger version of a paring knife. It is mid-way in size between a paring knife and a chef's knife. The blade can be flat-edged or serrated.