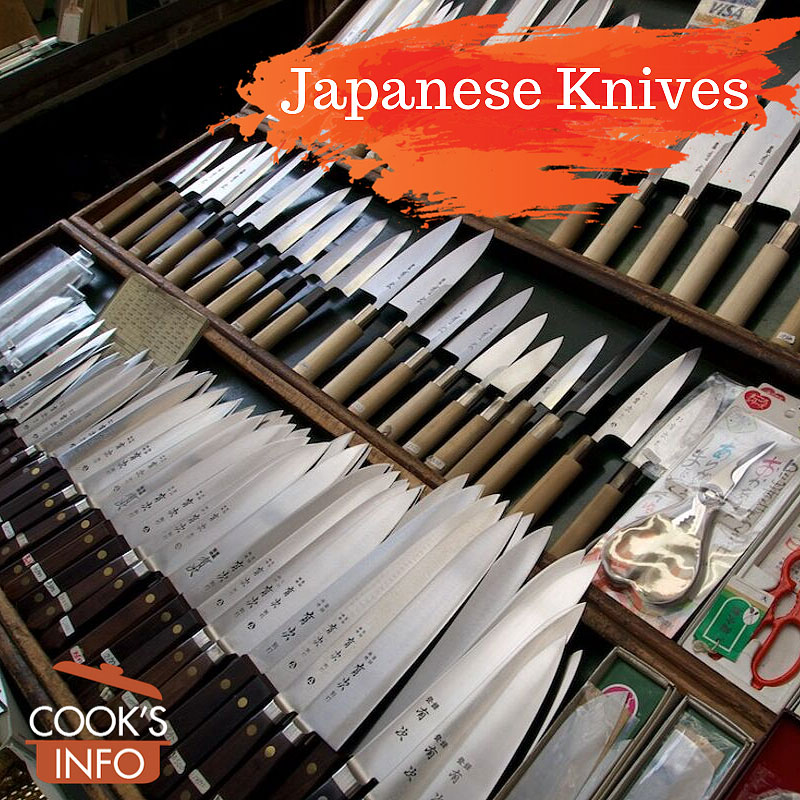 Japanese knives are prized for their craftsmanship and technical refinement.

Some Japanese knives are sharpened on both sides of the cutting edge, some only on one. When sharpened only on one edge, it is called “kataba” style. Sharpening only on a single edge allows the very thin slices that are an important feature in Japanese food.

Saori Kawano, who runs the ‘Korin’ knife shop in the Tribeca neighbourhood of New York City, says, “The Japanese traditional knives, they are all one-sided. They’re very hard to use because with a single side you cannot go straight down. You need control over the knife. But it’s extremely sharp because the edge is very, very steep…” [1]Marino, Nick. Why Japan Is to Knives What Italy Is to Sports Cars. New York City: New York Magazine. 1 May 2018.

There are literally hundreds of different varieties of Japanese knives. Saori Kawano says that her store has “more than 500 varieties displayed in the showroom.” [2]Ibid.

Almost every Japanese knife is meant for a one, single, specific task. There is even a specialty knife just for frozen foods. Different lengths of a knife may have different names. The variety is increased by a type of knife having several variations in different regions of the country. The vast majority of this bewildering array of knives, however, is used only in professional kitchens.

Home kitchens in tend to stick to just a few types of knives. Popular choices these days include gyuto, santoku, petty, and nakiri.

Bocho vs hocho for knife in Japanese

As far as cooking goes, there are at least three words in Japanese that mean “knife”: “hocho”, “bocho” and “kiri”.

The Japana Home web site points out a third word, “kiri”: “Most knives are referred to as hōchō (包丁), or sometimes -bōchō (due to rendaku), but sometimes have other names, like -kiri (〜切り, “… cutter”)” [4]Kamila. Japanese Kitchen Knife Types And Styles. London, England: Japana Home. 7 February 2017. Accessed October 2019 at https://japanahome.com/journal/japanese-kitchen-knife-types-styles/

The preference for type of knife blade tip has its roots in regional preferences: “In the east, where more-rustic cooking methods reigned, stout and functional straight blades were predominant. In the west, more-delicate, pointed styles found favour.” [5]Kamila. Japanese Kitchen Knife Types And Styles.

But today, it can be as much an individual cook or chef preference as anything.

Many Japanese knives are sharpened only on one side of the blade. The bevel is tapered to the right. This makes the knife suitable for right-handed people only. “Left-handed Japanese style knives are rare, and must be custom ordered.” [6]Chef Goku. Complete Guide to Japanese Knives. Accessed October 2019 at https://thechefdojo.com/complete-guide-to-japanese-knife-types/

Note that it also takes a while to learn how to properly use a single-sided blade.

Traditionally, high carbon steel (“hagane”) was used in Japan. There are two grades of it, “shiroko” (“white steel”), and a slightly better one, “aoko” (“blue steel”.) The blue steel grade is more resistant to marking and corrosion,

The Japanese use the word “honyaki” to mean knives forged from a single piece of metal. These are very expensive, chip easily if not used properly, and hard to sharpen. They are for professionals only.

In contrast, the word “kasumi” is used to designated knives made by joining carbon steel to soft iron. The carbon steel provides the cutting edge of the knife; the soft iron the rest of the knife’s body (except for the wooden handle.) These knives are cheaper and less brittle.

Knives are of course also made from stainless steel now in Japan, though professional chefs often still prefer the high carbon steel blades.

Japanese knife handles are traditionally made of wood. Many of the more expensive knives come with wooden sheaths as well to cover and protect the blade.

Though smaller than Japanese handles, Western handles are heavier, allowing more weight in the cut being made. They are also harder to replace because they are fixed to the blade with rivets.

Japanese handles are larger than Western ones, but even so are lighter, putting more of the weight of the knife into the blade.

Japanese handles are also easier to replace because of how they are attached. A hole is made at the centre of the wooden handle. The handle is then pounded with a mallet onto the heated tang [Ed: a “tang” is the extended portion of the blade for the handle] of the blade. Under general use, the handle won’t come out because force isn’t being applied in that direction. But, it can easily be replaced, and this is by design because after long use, the handle will wear out. [7]Hiro. Differences of Handles of Japanese Knives – Reasons of Expensive Handles. Hyogo, Japan: Fullhouse, Inc. 25 May 2018. Accessed October 2019 at https://orientalsouls.com/blog/japanese-knife/differences-handles-japanese-knives/

Here is a video showing the handle joining process:

Chefs in Japan routinely and frequently change their knife handles.

“Professional chefs who use knives every day have to change knife handles every half to one year. Wood handles tend to be worn out as they use, and water may cause rust of blades especially inside handles. Therefore, professional chefs prefer to choose ones that are easier to exchange handles frequently. Japanese kitchen knives are designed to make it easy to exchange handles, and they can get a new handle instantly [if] they use most common type. By changing handles periodically, they can keep their knives sanitary and check the state of their knives.” [8]Ibid.

Most Japanese wood handles are made from Japanese white-bark magnolia. For very high-grade knifes, ebony or yew tree wood may be used.

The caps of the handles are now usually plastic, though on more expensive knives it may be water buffalo horn. If a handle is made of yew or ebony, then the cap is likely to be horn. The horn is not necessarily more durable than the plastic. [9]Ibid.

Because they change handles frequently, professional chefs actually tend to prefer the less expensive magnolia wood, with plastic caps. Home users, who may never even once change a knife handle, may more safely invest in the more expensive yew or ebony handles.

The actual shape of the circumference of the handle may be oval, octagon or D-shaped. These shapes are thought to allow a stronger grip. [10]Cubbison, Samantha. How to Select the Perfect Japanese Knives. Tokyo, Japan: Japan Objects. 2 November 2018. Accessed October 2019 at https://japanobjects.com/features/japanese-knives/

Japanese knife laws are some of the strictest in the world. It started in 1876, when the Meiji restoration abolished the warrior class and banned its swords (which as far as cuisine is concerned, had the beneficial side-effect of diverting swordsmiths’ talent to Japan’s domestic knife industry.) Carrying swords today in public is still forbidden. You need a permit to have one to display in your house (this is easy to get, as they are recognized as art works.) You can also get home display permits for other related items such as spears, Bowie knives, etc.

“Owning a knife with a fixed blade longer than 15 cm requires permission from the prefectural public safety commission, but [the permission is] only for home ownership. Pocket blades on the other hand, including Swiss Army knives etc. are legal to carry around as long as the blade is shorter than 6 cm. Anything longer and you will need the same kind of permission from the prefectural public safety commission… UNLESS the blade exceeds 8 cm in length, in which case it is banned outright. However, exceptions can be made for utility blades like kitchen knives or, in some cases, knives used for fishing or hunting. Still though, the possession of an illegal blade is not a felony in Japan and will probably not land you in jail. But it can still get you in a lot of trouble.” [11]Cezary Jan Strusiewicz. Cutting To The Chase – How Do Knife Laws Work In Japan? Tokyo, Japan: Tokyo Weekender. 30 December 2018. Accessed October 2019 at https://www.tokyoweekender.com/2018/12/cutting-chase-knife-laws-work-japan/

Some Japanese knife makers have been in business 400 to 700 years. Many of them started as sword manufacturers:

“After the Meiji Restoration in 1868, both the creation and the possession of katana (Japanese swords) was banned. Overnight, this took away the jobs of many artisans who knew no other trade, often stretching back many generations. Many swordsmiths quickly learned to put their skills to another use, however, creating knives for domestic use, as kitchen knives could be sold for high prices and without limitations.” [12]Cubbison, Samantha. How to Select the Perfect Japanese Knives.

Carter Cultery. What do all these Japanese words mean? 30 November 2017. Accessed October 2019 at https://www.cartercutlery.com/ufaqs/what-do-all-these-japanese-words-mean/ 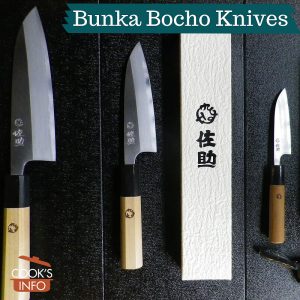 A Bunka Bocho knife is a Japanese all-purpose kitchen knife with a pointed, somewhat triangular-shaped, blocky tip and a medium-thick blade. Meant for home use, it can be used for meat, fish or vegetable. 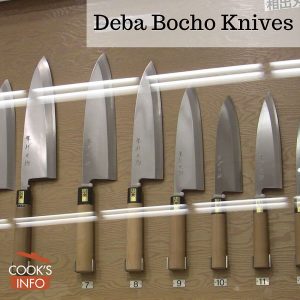 A Deba Bocho knife is a Japanese knife that is good for cutting through bone and skin. It can cut meat, fillet fish, and chop through fish bones. This is a knife that you would use to cut fish into large pieces, before switching to a finer knife to make... 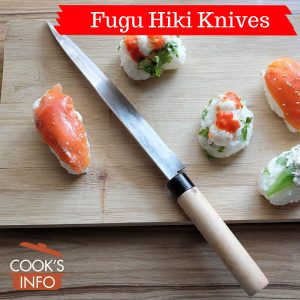 Fugu hiki knives are specially designed for slicing poisonous fugu fish into very thin slices for sashimi. They have a thin, flexible blade. 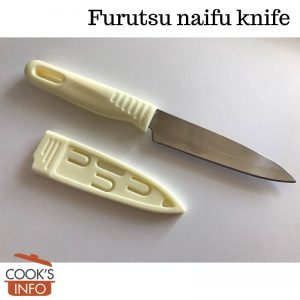 A Japanese fruit knife ("Furutsu naifu") is a small inexpensive knife made and sold in Japan. It comes with a covering sheath for the blade to make the knife safely portable. 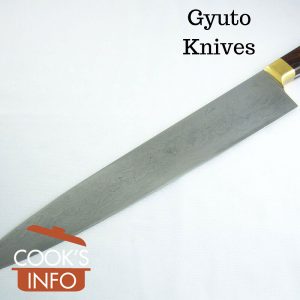 Gyuto knives are Japanese knives which look somewhat similar to a French chef's knife. They are used in restaurants to cut thin slices of meat and fish.

Kazari Bocho Knives have long, rectangular blades that angle down to form a sharp tip at the very bottom. They are used for making decorative cuts from vegetables. 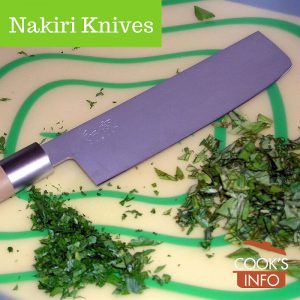 A nakiri knife is used in Japan for slicing, dicing and mincing vegetables in homes. It has a long, very thin blade. The tip can be rounded (Osaka-style) or square (Tokyo-style).

An Oroshi knife is a Japanese all-purpose cooking knife. It is used particularly for fish. 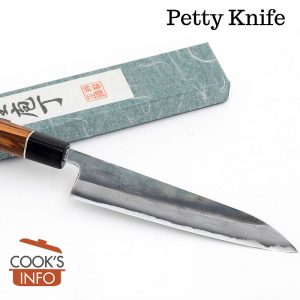 A petty knife is a Japanese paring knife. It is somewhat longer than Western paring knives. It is used for various fine tasks with vegetables and fruits such as peeling, slicing and shaping. 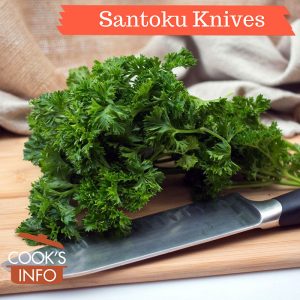 A santoku knife is sometimes called the Japanese chef's knife, because of its resemblance to a German or French chef's knife. It is an all-purpose knife, for meat, fish or vegetables. 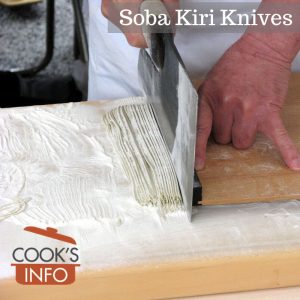 Soba kiri knives are large, cleaver-like Japanese knives used to cut soba dough into thin long noodles. A wooden handle allows you to press directly down on the knife while you chop. 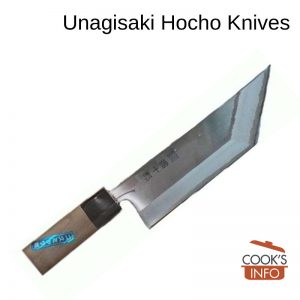 A Unagisaki knife is a special Japanese knife for filleting eel. The blade's nose is a straight 45 degree angle from top to bottom. 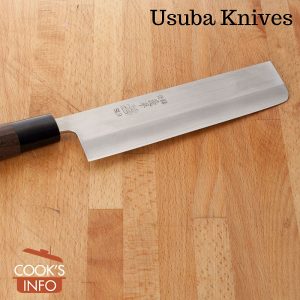 A Japanese usuba knife is a thin-bladed knife designed to cut through vegetables and fruits without crushing the cells, which can lead to discoloration and loss of texture. The knife can make paper-thin slices. There are three different blade tip styles...

A Yasai Bocho knife is a Japanese knife for chopping vegetables. It looks like a stunted version of a cleaver.

This web site generates income from affiliated links and ads at no cost to you to fund continued research · Information on this site is Copyright © 2022· Feel free to cite correctly, but copying whole pages for your website is content theft and will be DCMA'd.
Tagged With: Japanese Food, Japanese Knives, Knives