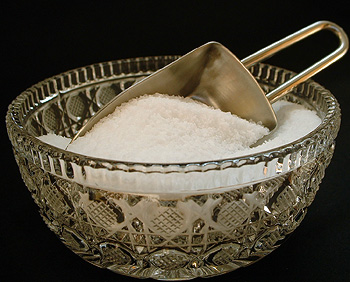 Some brands will contain no additives; other brands may contain some anti-caking agents. At one time, Morton Kosher Salt contained sodium ferrocyanide. Usually, kosher salt will be non-iodized.

In homes, it is generally used more in the kitchen during cooking rather than as a table salt.

A more accurate name for the salt would have been “koshering salt” to hint at its purpose. Kosher salt is salt that is used to “kosher” meat. Kosher meat must not have any blood in it. Salt applied to the surface of meat draws the blood to the surface where it can be washed away. Coarse salt must be used for this as fine salt would almost immediately just dissolve into the meat, instead of drawing out blood. And that’s why this coarse salt is called kosher salt — because of its use.

There is nothing necessarily actually kosher about kosher salt. It’s not necessarily certified as kosher (though Morton kosher salt, sold in North America, says it is packed under rabbinical supervision.) All salt is kosher — after all, it’s just a mineral (sodium chloride) and minerals are kosher.  The only anti-caking agent that would make it non-kosher for Passover would be dextrose, which is used for some regular table salts.

It is not as prevalent in UK supermarkets for consumer home usage, as most table salt sold on the shelves there is un-iodized anyway, and Maldon sea salt is an affordable “specialty” salt (not that you would use an expensive sea salt as a “koshering salt”.)

If a recipe calls for kosher salt, think about how it is going to be used in the recipe. Is it going to just be tossed into a soup where it will dissolve into the water? If so, any old salt will do as a substitute. Or, is it being used for its texture on rims of margarita glasses, tops of breads and buns, etc? Or, is it being used to do “salt baking” — for instance, when you pack a fish entirely in salt and bake it in that. In either of these last two instances, texturing or as a baking medium, then you can substitute a coarse or flaky sea salt.

Because kosher salt is coarser than standard household table salts, and less of it will therefore fit into a teaspoon, use a bit more kosher salt when substituting kosher salt for table salt, anywhere from ¼ to ½ a teaspoon more. (If the salt is in a recipe just for taste, let taste guide you: you may not feel you need any extra salt to compensate.) Also be aware that it may not blend into a dry mix as well as regular fine salt, so in some instances it may need to be dissolved into any liquid part of a recipe first.

One salt that definitely wouldn’t have been kosher is Roman salt. Salt deposits were mined, then mixed with water to dissolve the salt, making a brine solution that would be boiled in large uncovered pans over fire. To help the salt come together and form crystals, they would add some kind of coagulating agent such as blood, and to help any organic matter float to the surface where it could be skimmed off, a bit of urine. You couldn’t even get this by the Health Authorities nowadays, let alone the Rabbis.

This web site generates income from affiliated links and ads at no cost to you to fund continued research · Information on this site is Copyright © 2022· Feel free to cite correctly, but copying whole pages for your website is content theft and will be DCMA'd.
Tagged With: Jewish Food, Kosher