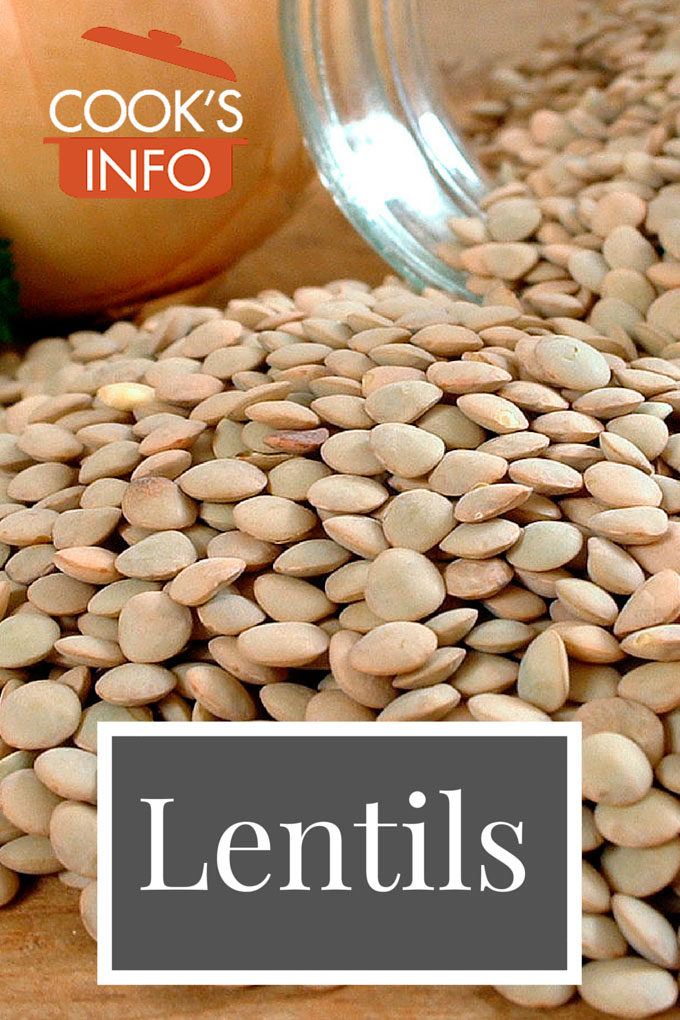 A lentil is a small, flat, round edible seed. It’s a member of the bean and pulse (legume) family, but is one of the quicker cooking members.

Lentils come from an annual vine that produces pods, with two flat seeds inside to a pod.

Lentils can’t be eaten raw; they need to be cooked.

Though consumers today are mostly familiar with only three types of lentils (brown, green and orange), there are many more varieties. In India, they grow over 50. Canada is the largest exporter of lentils in the world, with most being grown in the province of Saskatchewan. [1]”We export 97 per cent of what we grow here,” Kehrig [Ed: Rachel Kehrig, Saskatchewan Pulse Growers’ manager of market promotion for North America] explained, adding that 99 per cent of Canada’s lentils are grown in Saskatchewan. During past promotion campaigns, Kehrig said the province’s lentil growers found that “not a lot of people knew that lentils were grown in Canada, let alone in Saskatchewan. So we really wanted to change that.” Many people mistakenly believe the lentils consumed locally come from India, Kehrig said. “Actually, India’s getting their lentils from us.” — Seiberling, Irene. TV chef stirs interest in lentils. Regina, Saskatchewan, Canada: The Leader Post. 20 August 2011.

You can buy lentils already cooked and ready to heat or use in cans, though most are sold dried.

Cooking instructions for lentils vary by type of lentil. For specific directions, see specific entry on CooksInfo.com on the type of lentil you have in mind.

The following advice applies to all lentils: 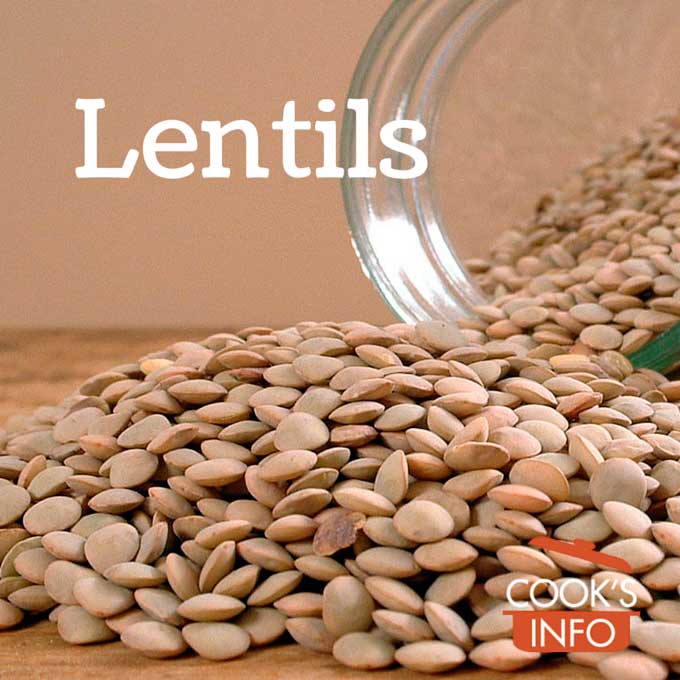 Canned lentils can have a great deal of added sodium, usually around 200 to 300 mg of sodium per 100 g (½ cup) depending on brand; rinsing them before use will remove up to 60% of the sodium. [2]”The best way to deal with the issue of sodium is to be sure that you rinse your canned lentils under running water – this will remove up to 60 per cent of the sodium content.” — Saskatchewan Pulse Growers. Canadian Lentils FAQ. Retrieved November 2012 from http://www.lentils.ca/about-canadian-lentils/canadian-lentils-faq

Cooked lentils can be frozen. Pack into sealed containers or bags and freeze for up to 3 months.

Lentils were probably being grown by man before 7,000 BC. The ancient Egyptians cultivated and exported lentils. The Roman writer Apicius records several lentil recipes. The Roman poor ate a dish called “conchis”, in which both the lentils and their pods were cooked. Pliny the Elder describes a recipe for lentils cooked with beans, cabbage and turnip.

Lentils were introduced into America after World War I.

Pullman, in Washington State, is home to America’s National Lentil Festival. Held every August since 1989, the festival’s official mascot is Tase T. Lentil and features a lentil pancake breakfast.