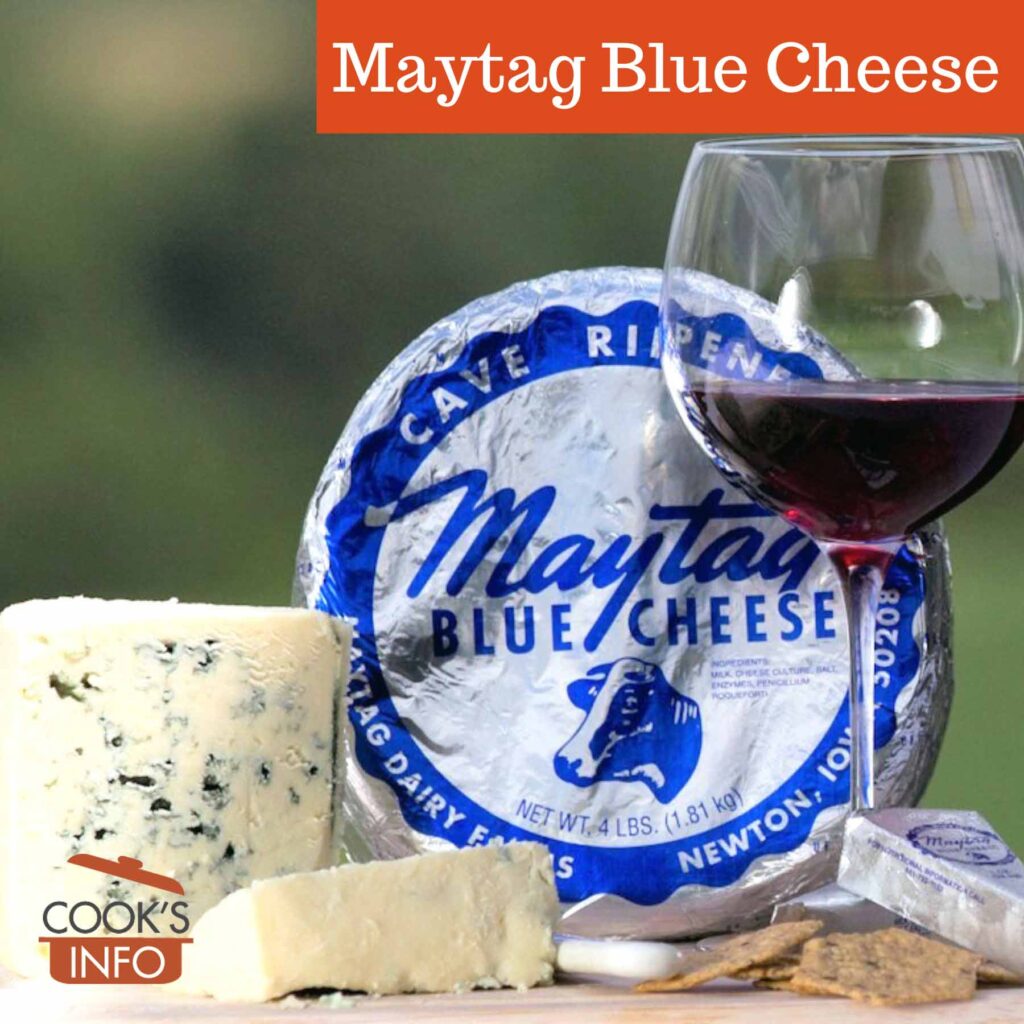 It is a mild blue cheese with a bit of a lemony tang to it. The texture is moist and crumbly.

The cheese is made from cow’s milk, with a vegetarian rennet and Penicillium roqueforti mould added. It takes about 45 kg (100 pounds) of milk to make 4.5 kg (10 pounds) of the cheese.

It’s made in 1.8 kg (4 pound) cylinders that have long holes punched in them with needles to allow air to get inside to help the mould to develop. It is then aged in vaults beneath Newton for about 6 months.

The company turns out about 600 wheels of cheese a day.

Maytag Blue Cheese was created by Frederick L. Maytag II and his brother Robert Maytag in Iowa. The first batch was produced on 11 Oct 1941.

Their grandfather, Frederick, had invented the washing machine. Their father, E.H. (Elmer Henry) Maytag, had started working at their grandfather’s company in 1902 and become the Maytag president in 1926. E.H. had started a dairy farm as a hobby in 1919, raising Holstein cows. During the 1920s and 1930s, E.H. sold bottled milk and cream from that farm for delivery. He died in 1940.

Frederick II and Robert wanted to turn the dairy into more than just a hobby business, and so were looking for a product that could turn a definite profit.

In 1941, food scientists at Iowa State University developed a process for making blue cheese from homogenized cow’s milk (as opposed to Roquefort, which is made with unpasteurized sheep’s milk.) The university had patented the process, but the Maytag brothers struck a deal with the university to use it. (Ed: The search in the 1940s for an American Roquefort-type cheese also resulted in Guler Blue Cheese.)

The two brothers originally used the milk from their father’s herd for the cheese, but now the milk comes from neighbouring herds.

Later, Frederick’s son (Frederick III, aka Fritz) would go on to start the Anchor Steam Brewery.

From 1990 to 2000 the manager of production was a man named Monte McIntyre, who would go on to create and make Point Reyes Original Blue Cheese:

“Monte McIntyre was raised on a dairy farm. “I grew up in a family, what I would term a Velveeta-type family,” he says. “We really didn’t have a taste for fine cheese. But even as a child the few times we would have a meal in town, on my salad, I would always order blue cheese dressing…”

In 1990, at the age of 43, he was hired by the Maytag family, the heirs to the appliance company fortune, who had a blue cheese plant in Newton, Iowa. The Maytags had taken up cheese-making in 1941, for much the same reasons that now compelled the Giacominis: to escape the grind of the liquid milk market. In 10 years there, McIntyre increased the company’s production four-fold and learned to love the challenge of making soft, wet, Danish-style blue cheeses.” — Green, Emily. Point Reyes invents a New Kind of Blue. Los Angeles, California: The Los Angeles Times. Sunday, 18 November 2001. Page H6, col. 2.

As of 2022, the cheese factory is still a family owned small business.

This web site generates income from affiliated links and ads at no cost to you to fund continued research · Information on this site is Copyright © 2022· Feel free to cite correctly, but copying whole pages for your website is content theft and will be DCMA'd.
Tagged With: American Cheeses