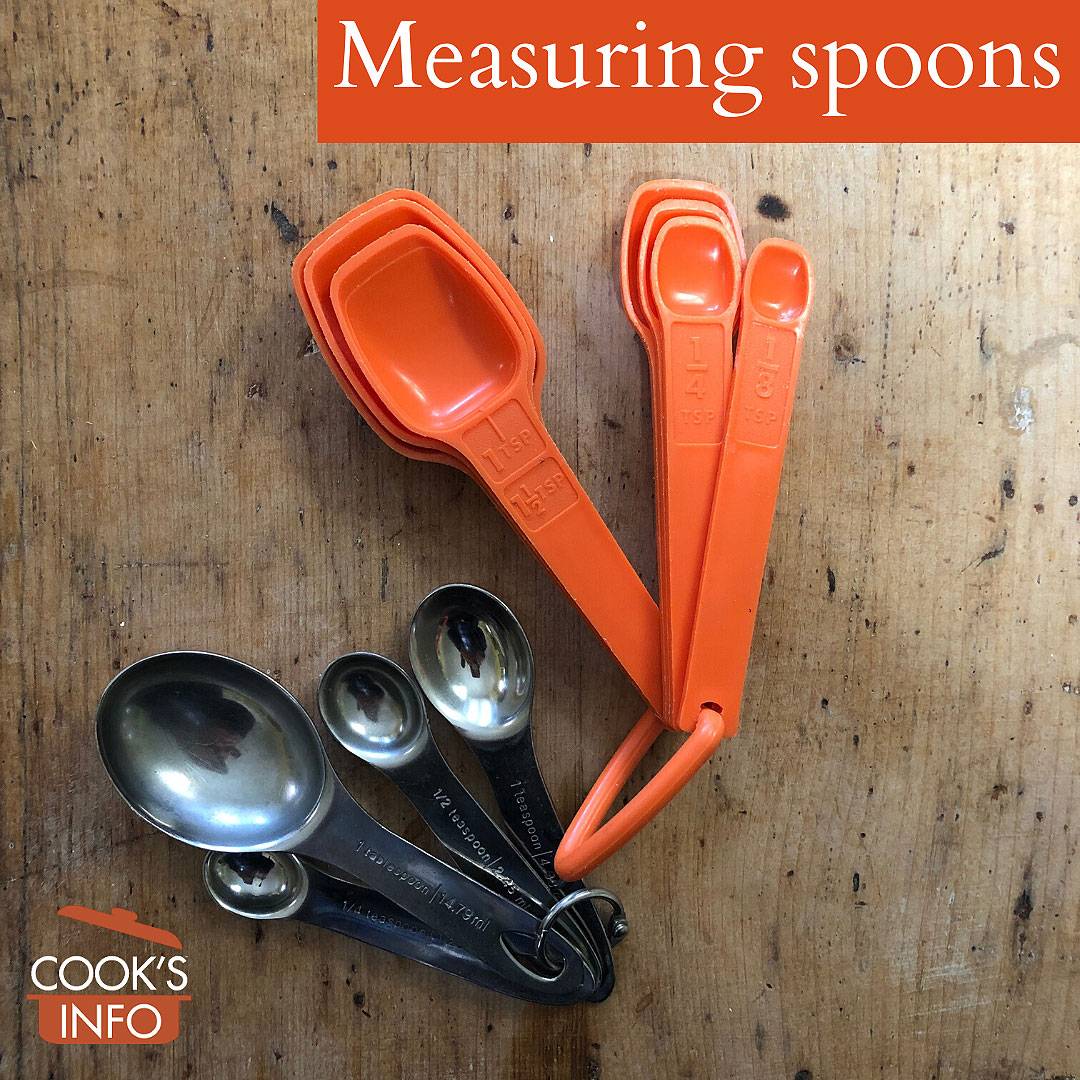 Teaspoons and tablespoons are unofficial measurements.

They are not legally defined because they aren’t used in commerce or in science, so they never seemed to merit the attention of government.

However, for the purpose of metric conversion in nutrition labelling, U.S. federal law [1]21 CFR 101.9(b)(5)(viii) did finally attempt to define these measurements, by saying that for commercial labelling purposes a tablespoon is 15 ml (by convention, for kitchen use, it is thought of as ½ oz, though it isn’t quite exactly), and that a teaspoon is 5 ml.

Bear in mind that in North America, compliance in measurement accuracy for any home measuring utensil — be it a cup, a scale, or a teaspoon — is not enforced. The consumer web site, “Don’t Waste Your Money”, reviewed eight brand-name sets of measuring spoons in 2018, and found only one set (by William Sonoma) to be nearly-all accurate. The most common issue they had with each set was the ¼ teaspoon actually measuring out ⅓ teaspoon instead. “Almost every ¼ teaspoon measured closer to a ⅓ teaspoon. Not one ¼ teaspoon in any of the test sets was accurate.” [2]Morgan, Jessica. There’s A Chance Your Measuring Spoons Aren’t Accurate. Cincinnati, Ohio: Don’t Waste Your Money. 28 February 2018. Accessed November 2020 at https://www.dontwasteyourmoney.com/measuring-spoons-test/

Measuring spoons can be made of stainless steel, plastic, wood, copper, ceramic, even Jadeite glass.

If you get metal ones, make sure they are dishwasher safe. Stainless steel ones can bend if you’re using them to dig out something like hardened brown sugar — just gently bend them back into shape as much as you can.

Many plastic ones in North America meet their end after being washed out of the cutlery basket in the dishwasher by a jet of water, and landing on the heating coils that North American dishwashers have at the bottom, where they get melted into something unrecognizable.

Metal and plastic measuring spoons usually have holes in the end of the handles, and are joined together by a ring passing through the holes. The rings keep the sets together. The spoons in the set typically nestle together for storage into each other’s bowls.

Most measuring spoons have rounded bottoms. Some have bent handles allowing them to rest on the counter without tipping out the contents of their measuring bowls; some allow the resting to happen by dint of flat-bottomed bowls.

Some designs of measuring spoons have a handle in the middle, and then a measuring spoon at each end completing the handle for the other end (this design, while more compact storage-wise, is less useful if the size you want just happens to be on the other end of the one you just measured honey with.)

There is no industry standard anywhere of what gets included in a set of measuring spoons — it will vary by manufacturer. Standard sizes are ⅛ teaspoon, ¼ teaspoon, ½ teaspoon, 1 teaspoon and 1 tablespoon. Cheaper sets will omit the ⅛ teaspoon. Odd-size (but still useful) ones are ½ tablespoon, 2 teaspoons, 1 ½ tablespoons and 2 tablespoons. Some manufacturers make only the standard-sized sets, some sell the standard and odd-size sets separately, some include some or all of the odd-sized ones in their standard sets. Occasionally you’ll see 1/16 teaspoon (pinch), ⅓ teaspoon, ⅔ teaspoon, 1 ½ teaspoon sizes and ½ tablespoon. It is very hard to find ⅓ teaspoon measures, even though there are thousands of recipes calling for ⅓ teaspoon of things. When confronted with this, it’s best to use a heaping ¼ teaspoon.

You can also get measuring spoons not looking like spoons at all. Instead, they are long pieces of flat plastic, with a covered rectangular bowl at one end. The cover slides, and has an edge that goes down into the bowl, dividing the bowl into an “available” portion and a “closed off” portion. You slide the cover to match various markings on the handle, thus adjusting how big the “available” portion is, and thus creating the “measuring space” that you need.

Most people recommend having two sets of measuring spoons. If the 1 teaspoon from one set has just had butter on it, you don’t have to stop everything to wash it to measure a teaspoon of sugar.

The great measuring spoon debate: to detach or not

Some plastic ones detach easily from their rings for separate use, then snap back on for storage (though eventually, of course, one spoon gets forgotten, then another, and eventually you have just this ring floating by itself about your drawer.) Thus starts the great debate many have with themselves: do I leave my set of measuring spoons all together, so that they’re easier to find and one of them doesn’t go astray, or do I take them apart, so that when one is dirty, only one has to be washed, and so that when I’m using them, I’m not trying to keep the dirty one that has butter on it from flopping into the baking powder that I’m measuring with another of them? Some people take them all apart, and solve the “storing together” problem by dedicating a slot in their drawer divider to them.

Government metric officials in the U.S. and Canada seem determined to avoid using the words “teaspoon” or “tablespoon” in their conversion efforts. They will say “5 ml” or “15 ml” instead. This might give some the impression that that is how the rest of the metric world does it.

The reality is that officialdom in the U.S. and Canada is suffering from a case of “TTH” (“trying too hard”) and that teaspoons and teaspoons remain a fundamental kitchen measurement in countries where the metric system has been in place for 200 years and upwards, and that unofficially they are the same measurement in dozens of countries. (There is only one odd man out — Australia. See below for more details.)

In metric countries, large quantities of dry and solid ingredients are typically measured by weight.

Small quantities of such ingredients, however, are measured with measuring spoons rather than by weight, because it’s too much bother to weigh them out. In metric countries, they are referred to as teaspoons, tablespoons, etc., rather than by referring to their metric volume in millilitres. A French recipe wouldn’t call for 15 ml of dried sage; it would call for “une cuillère” (a teaspoon.)

If you are converting a recipe from North American to metric, you should just go ahead and say “tablespoon” or “teaspoon”: trying to convert those amounts to ml will just confuse your intended audience.

Most Europeans “don’t sweat the small stuff” when it comes to measuring spoons. They just whip a spoon out of the drawer.

If pulling any old spoon out of the drawer seems shocking, bear in mind that there are no official standards-checkers for North American measuring spoons, either: it’s not uncommon that one set can vary from another by as much as 25%.

That being said, there are conventions for how much volume is intended. Below is a list of volumes intended in ml (though to be clear, the measuring spoons are never referred to as 5 ml or 15 ml.)

When Australia went metric, for reasons unclear to us officials decided to define a larger tablespoon. Consequently, officially at least, Australian metric tablespoons are larger than the rest of the world. There are now 4 teaspoons in an Australian metric tablespoon, putting them out of whack with the rest of the English-speaking world: New Zealand, Canada, America, South Africa, the UK, Ireland, US, etc., all stuck to 3 teaspoons / 15 ml. Many European countries did as well.

“In Australia, metric spoons are now fixed: a teaspoon is 5 mL and a tablespoon is 20 mL.

Sometimes you might see a reference to a dessertspoon or to an abbreviation like ‘dspn’. It seems to be generally accepted that a dessertspoon = 2 teaspoons and we prefer to say two teaspoons — we never use the term dessertspoon in a written recipe. Nor do we refer to such things as salt-spoons and coffee-spoons. We only use teaspoons (5 mL) and tablespoons (20 mL).” [3]Pomroy, Wendy and Pat Naughtin. Metric cooking with confidence. Belmont, Geelong, Australia. Metricationmatters.com . 2008. Page 1.

New Zealand did not officially follow Australia in switching to a 20 ml tablespoon. Owing to the heavy influence of Australian food media, however, even some government food authorities in New Zealand seem to think that they did.

You’re best to do any measuring away from the bowl in which you’re mixing things — for instance, pouring vanilla extract into a teaspoon. That way, if an oops occurs, it won’t ruin what you already have in the bowl. We all get lazy about this — then curse our laziness when, after a run of good luck, an oops finally does catch up with us.

It’s always a problem trying to find a measuring spoon that will fit into a spice jar. You have to measure the spices the same way as you do liquid, by pouring them in and hope too much doesn’t miss and go all over your work surface. Or, you can try one of the smaller measuring spoons, such as ⅛ of a teaspoon, to see if it will fit in so you can scoop spice out. Mind you, if your 1 teaspoon is attached by a ring to the spoon you are using as a scoop, it’s going to be tricky transferring the scooped contents into it. Some measuring spoons are specially designed to fit into spice bottles, with long handles and long narrow rectangular or oval bowls.

To measure liquid, you hold the measuring spoon level in the air, and carefully trickle the liquid in until it comes up to the top of the rim of the bowl.

When a recipe calls for a tablespoon of melted butter, unless the recipe specifies to melt the butter first and then measure it, always assume it means that you are to measure the butter in its unmelted state. In measuring butter, ideally you start off with somewhat soft butter. Just scoop some up on a knife, and press it into the tablespoon. If it’s hard butter, you may need to do it in small pieces, and press it in.

Measuring spoon measurements are always assumed to be level unless stated otherwise.

Very experienced cooks can use a coffee spoon out of a drawer and eyeball how close a quantity of baking soda in it is to an official teaspoonful. But even they would have trouble eye-balling when it comes to ¼ and ⅛th a teaspoon.

8 tablespoons should equal half a cup — if they don’t, either your tablespoon is off, or your cup is.

This web site generates income from affiliated links and ads at no cost to you to fund continued research · Information on this site is Copyright © 2023· Feel free to cite correctly, but copying whole pages for your website is content theft and will be DCMA'd.
Tagged With: Conversions, Measuring Tools