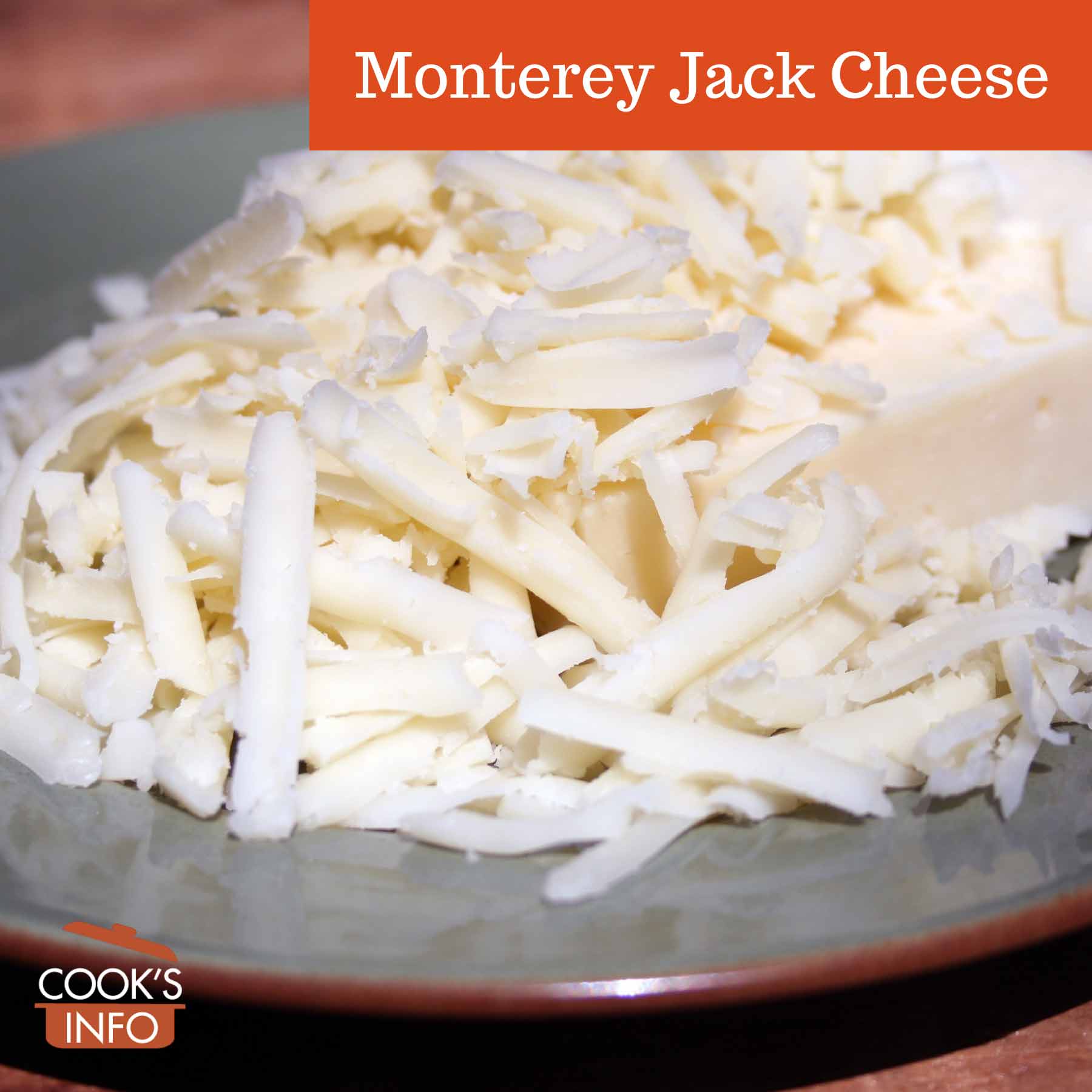 Monterey Jack Cheese is a semi-soft cheese made from pasteurized cow’s milk, whole or skimmed. It’s normally aged two weeks to a month.

It’s somewhat like a cheddar, though it’s always white. Its main virtue is that it melts well and that its mild, inoffensive flavour won’t clash with whatever you want to combine it with.

A standard cheese in Tex-Mex cooking, it is available in plain, herbed and spiced versions.

Dry Monterey Jack is aged a minimum of 6 months, sometimes 9 months to a few years. During aging, the rind is often smeared with oil to keep it soft, and rubbed with crushed pepper.

The aging gives it more flavour and makes it hard enough to be finely grated.

Because it can be grated like Parmesan, it was often used by Italian immigrants in the 1950s and onwards until a supply of Parmesan became regular.

Monterey Jack with chile peppers in it.

Monterey Jack shreds and melts well. It is used a great deal in Tex-Mex cooking as an ingredient in dishes, and as a garnish.

Dona Juana Cota de Boronda began selling door to door “Caso” or “Queso del Pais” (country cheese) from a small cheese factory on her own property in Castroville, Monterey County, California. Her cheese was probably very similar to the Queso Blanco made in Mexico.

The Boronda family had immigrated to California from Spain in the 1700s. Juana had brought her cheese recipe with her. Where she came from, in Espinosa, Spain, part of the cheese-making practice was to press the cheese with a vice. The English speakers called the vice a “jack”. A gringo, Will Hatton, also got the idea for making this Queso del Pais; he sold his to the “Hotel del Monte”, so for a while it became known as Del Monte cheese (nothing to do with pineapple).

A local landowner, a man named David Jacks (1822 – 1909, born in Crieff, Scotland, arrived in Monterey 1849), had lots of cows but hadn’t had much luck in selling just milk. He apparently picked up the idea of the cheese and began making it himself in the 1880s. With his greater resources, he was able to ship it out of the county to places such as San Francisco. He stamped the cheese crates “Jack’s Monterey Cheese”. He was a man who would have had no problem stealing an idea and giving no credit for it; at one point, he apparently loaned money to the town of Monterey and tried to foreclose on them and seize the town.

Dry Jack appears to have been “discovered by accident sometime during the First World War in San Francisco, when a cheese wholesaler (D. F. DeBernardi), found that his Monterey Jack had been in storage too long and “gone hard.” You’ll hear versions of the story that say it was immediately useful, because it could be grated like Parmesan, supplies of which were interrupted during the First World War, but this sounds like a bit of revisionism, as Parmesan would not have been widely known in the United States at that time.

The name “Monterey Jack” was recognized in 1955 by the US Food and Drug Administration.

Disregard stories you see about the cheese originating in Roman times.

Often mistakenly spelt “Monteray Jack”, it’s actually “Monterey”, as in the name of the county in California.

This web site generates income from affiliated links and ads at no cost to you to fund continued research · Information on this site is Copyright © 2022· Feel free to cite correctly, but copying whole pages for your website is content theft and will be DCMA'd.
Tagged With: American Cheeses, Tex-Mex Food