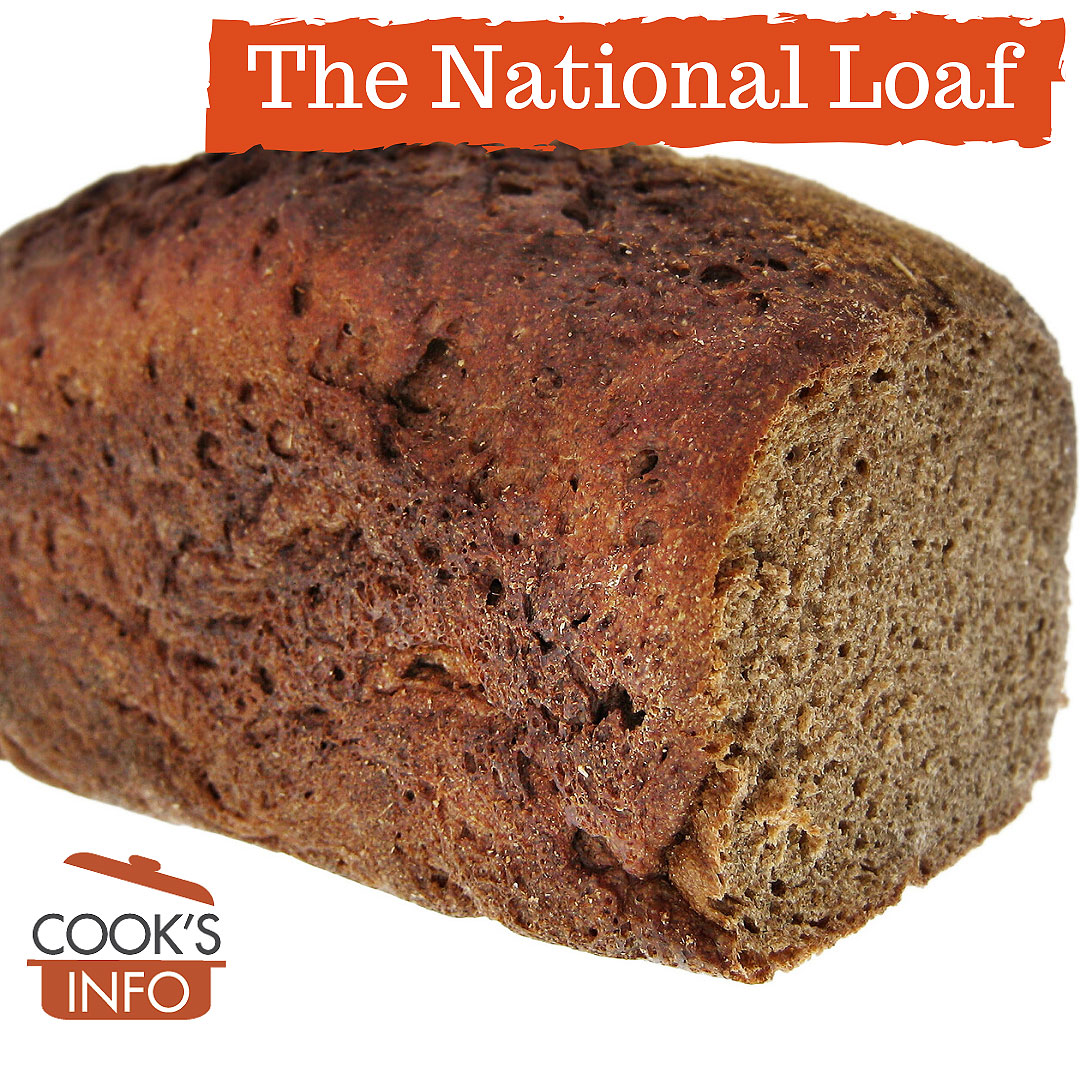 The National Loaf was a government regulated and mandated loaf of bread sold nationally in Britain from 1942 onwards as part of the home front effort during World War II (1936 – 1945.)

Rationale for a National Loaf

By the outbreak of the war in September 1939, Britain, with a population of around 50 million, was importing 70% of its grains, with the remainder grown at home. The bulk of that imported grain was, as it is now, wheat shipped from Canada across the North Atlantic. Though the ships travelled in protected convoys, they were vulnerable to attack and sinking by German submarines.

To give each person in the United Kingdom even just an small, inadequate amount of bread daily such as ½ oz., planners calculated that 30 ships were required to import in 250,000 tons of wheat a year. That was wheat for bread alone, not counting all the wheat required for other food products.

This shipping cost scarce money and resources that could be used elsewhere in the war effort: the less shipping space required for wheat, the more space was available for war materials.

Notwithstanding that, though other food stuffs had been rationed since January 1940, the British government did not want to ration wheat or bread for as long as could possibly be avoided for morale purposes.

The Ministry of Food was therefore charged with reducing the amount of imported wheat required and making the most of what did arrive, while continuing to keep bread freely available and ensuring that the population was receiving optimal nutrition value from their food.

The solution they arrived at was to make the wheat they did import go further by the creation of “National Wheatmeal Flour” or “National Flour” in the spring of 1942.

National Flour was used to make the National Loaf, a yeast-risen, bakery-made bread for daily consumption.

A ban on commercial, pure white bread production came into effect on 6 April 1942 [1]British Food Journal Volume 44 Issue 4 1942, pp: 31 – 40. . The regulations stated that 75% of the wheat flour in a loaf of bread had to be of 85% extraction (the rest of the wheat flour could be regular white wheat flour), that the bread had to be sold unwrapped, and unsliced, that the bread could only be sold the day after it was made, not on the day of, and that the official legal size of a loaf of bread was reduced from 16 oz to 14 oz.

The definition of the National Loaf was adjusted over the years.

Potato flour was also allowed by the summer of 1943:

“Apart from yeast, salt, and the various improvers which are the recognised adjuncts of bread baking, the permitted ingredients of National Flour for making the present National loaf are wheat flour of 85 per cent extraction, imported white flour, oat products, barley, rye, milk powder and calcium in the proportions authorised. In addition the baker may use potatoes and potato flour as permitted in the Bread (Control and Maximum Prices) Order, 1943. No modification of these arrangements is under consideration at the present time.” [4]Mr William Mabane, Parliamentary Secretary to the Ministry of Food, in answer to Sir Leonard Lyle. House of Commons Debate. 23 June 1943. Hansard vol 390 c1162.

The National Loaf also had quite a high amount of salt in it, to make it keep longer.

85% extraction rate flour is used today in France to make the famous, and expensive, Pain Poilâne. Be that as it may, the British government had to churn out a good deal of propaganda to get people to accept the National Loaf. People loathed it; they called it “Hitler’s Secret Weapon.” The bread, some said, looked grey and unappealing, and they felt it was coarse, with a texture like sawdust, and dry (and stale by the time they were allowed to buy it, 1 day after baking), and had a very tough crust to boot.

Countering this were rumours that the bread had certain aphrodisiac qualities. Some sources feel that the rumours were deliberately put out by Lord Woolton, head of the Ministry of Food. The “basis” of the rumours were that the loaves were rich in wheat germ, which is rich is Vitamin E, and that Vitamin E increases fertility.

Bread was never rationed in Britain during the war, though ironically it was for a short period after the war, from 21 July 1946 to July 1948. Some feel that the reason Prime Minister Attlee’s government introduced bread rationing was more political than out of actual necessity. [5]Britain wanted two things from America: (a) That America should take over feeding refugees in the British occupied zone of Germany; (b) reconstruction loans and Marshall Plan aid. To this end, Britain needed, frankly, to look needy, even though it had a guaranteed wheat supply from Canada. Bread rationing ended in 1948 shortly after a signed and sealed agreement on Marshall Plan aid was safely in British hands. The complete story is covered by Ina Zweiniger-Bargielowska in her “Bread Rationing in Britain, July 1946 – July 1948” in the journal “Twentieth Century British History” (Vol 4, No 1 1993. pp. 57 – 85).

In 1950, sliced, wrapped white loaves were allowed to be sold again, even though a few people felt that for population health reasons, the government should keep the National Loaf as the only legal bread. They feared that allowed a choice, people would go back to white bread — which in fact they did.

In 1956, the National Loaf was discontinued.

Developers of The National Loaf

Among the people who worked on developing specifications for the National Loaf were Harriette Chick, Elsie M. Widdowson, and Robert McCance.

Harriette Chick (6 January 1875 to 9 July 1977) was a medical research scientist who worked in nutrition and public health. In 1905, she became one of the first paid women scientists in the UK. Her involvement in the National Loaf was to make sure that it delivered maximum nutrition. After the war, she was made a Dame of the British Empire in 1949 for her contribution to the National Loaf. Chick never married. [6]Obituary Notice. Dame Henriette Chick. Br. J. Nutr. (1978), 39, 3. [7]Haines, Catharine M.C. International women in science: a biographical dictionary to 1950. Page 60 – 61. ABC-CLIO, 2001.

This recipe is an approximation of what the National Loaf would have been like. A closer approximation would use 85% extraction flour, if obtainable, mixed with white flour in the various proportions discussed in this piece. (See National Flour entry for an approximate recreation suggestion.)

“Sir, having read Sir Ernest Graham-Little’s letter (April 14, p 530), I think your readers should be correctly informed on the technical points mentioned. I refer to his statement that home-grown wheat is the only source of wheat germ, since, he says, the germ is removed from imported wheat in the country of its origin. The main argument of the letter is indeed based on this supposition.

As one who analyses practically every boat-load of wheat arriving in this country, I must point out that the statement made in Sir Ernest Graham-Little’s letter is completely incorrect. The germ is not removed in the country of origin but arrives here as a constituent part of whole wheat.

Secondly, Dr. Frewen Moor (p. 531) asks what goods are made from flour in the milling of which it is permissible to extract germ — i.e., flour destined for manufacturing purposes. Such flour (known officially as “M” flour) is mainly used for self-raising flour or for making biscuits and confectionery goods. These goods are usually more alkaline than yeast-made bread, and in consequence of the pH being 7.0 or over the B1 present is largely destroyed in the baking process. Hence the decision of the Ministry of Food to allow germ to be extracted in such cases, which represent only a small percentage of the total flour used.” — D.W. Kent-Jones, Ealing W5. “Flour in the Loaf.” Br Med J 1945;1:644 doi:10.1136/bmj.1.4400.644 (Published 5 May 1945) Page 644.

This web site generates income from affiliated links and ads at no cost to you to fund continued research · Information on this site is Copyright © 2023· Feel free to cite correctly, but copying whole pages for your website is content theft and will be DCMA'd.
Tagged With: British Wartime Food, Rationing, Second World War, Yeast Breads