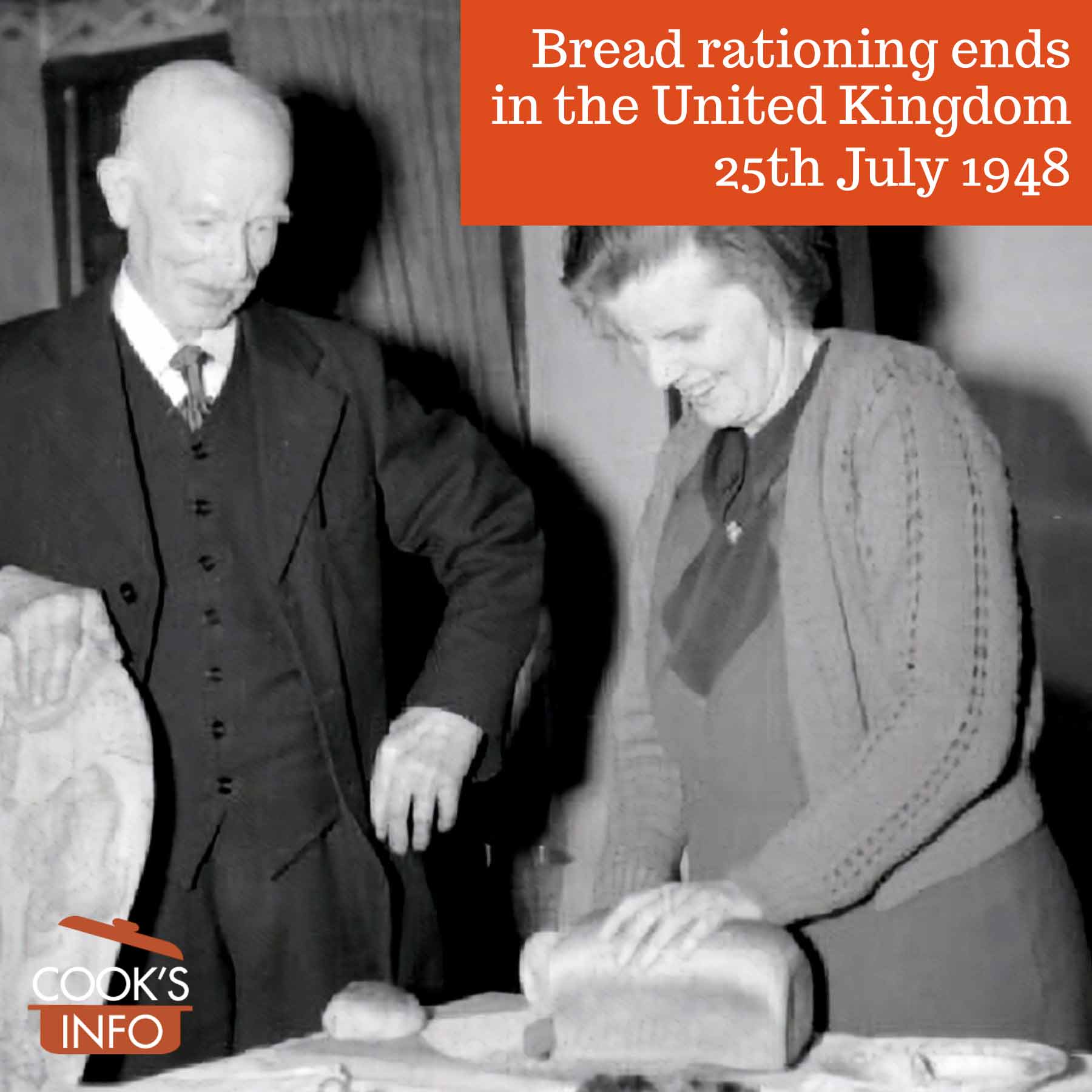 The 25th of July marks the day in 1948 when wartime bread rationing ended in the United Kingdom.

However, even though bread came off rationing on this day in 1948, it would not be until 1950 that the shops were allowed to sell you sliced, wrapped bread again! It still had to be sold to you in whole loaves that you sliced yourself at home. And, it still had to be the only permitted type of loaf allowed for sale, the National Loaf.

To celebrate today, play some Vera Lynn music, and have yourself a piece or two of bread freshly-sliced off at home from a loaf of brown bread. If you butter it, don’t forget to do so the wartime way: butter one slice, scrape it off, and use that to butter the second slice!

How bread rationing was avoided

Still, there was the puzzle of how to achieve this, given that Britain imported most of its wheat.

Wartime shipping realities meant that less wheat could be imported. Shipping was being lost to U-Boat activity in the Atlantic, and space on the ships that did make it through was needed for munitions and other supplies. So, to be as efficient as they could be with what grain did get imported, the British Ministry of Food decided that white flour would be banned, as being wasteful, and all flour would be ground to an 85% extraction rate. This more meant flour from the grain, and thus more bread that could be made. This was called the National Flour. While not quite whole wheat flour (in order to be a bit of a compromise), it left all the bran in it except for the coarser pieces, resulting in a somewhat greyish flour.

Some women in desperation would sieve the flour through their nylon stockings to try to turn it into white flour.

Bakers were obliged to use the National Flour to make only one type of bread, which was called the National Loaf. Nutritionists praised the composition of the bread (and fought for it to be the only legal bread after the war); the population however dubbed it “Hitler’s Secret Weapon” because they disliked it so much. [Ed: for more information on this bread and National Flour, see the separate entry on National Loaf.] However, it was a success: the government was able to keep the supply plentiful enough that bread was never rationed during the entire war, even though the situation looked touch-and-go at times.

Despite the bread supplies not being restricted, the government did not want any waste of bread, either. It was illegal to feed bread to pets, not even bread to the birds.

Bread wasted — Miss Mary Bridget O’Sullivan was fined a total of ten pounds, with costs, for permitting bread to be wasted. It was stated that her servant was twice seen throwing bread to birds in the garden, and when Miss O’Sullivan was interviewed she admitted that bread was put out every day. “I cannot see the birds starve”, she said.” — Bristol Evening Post. 20 January 1943.

Bread rationing imposed after the war for political strategy reasons

Ostensibly, the bread rationing was introduced to help feed the starving populations of war-torn Europe.

Some feel, however, that the real reason Prime Minister Attlee’s government introduced bread rationing was more political than out of any actual necessity. Britain wanted two things from the United States:

To this end, Britain needed, frankly, to look needy, even though it had been assured by Ottawa of a guaranteed wheat supply from Canada:

“Due to long-established trading relations with Canada, which supplied virtually all wheat imports, British domestic consumption was relatively secure. This security was enhanced by the signature of a four-year wheat contract with Canada on 24 July 1946.” [3]Zweiniger-Bargielowska, Ina. Bread Rationing in Britain, July 1946–July 1948, Twentieth Century British History, Volume 4, Issue 1, 1993, Page 74.

The end of bread rationing

Bread rationing in the U.K. ended on 25 July 1948 shortly after a signed and sealed agreement from the United States on Marshall Plan aid was safely in British hands.

As for the National Loaf, it was discontinued in 1956 and people returned en masse to white bread, ending a period in history in which the British population was healthier than it had ever been at any point in its entire history.

This web site generates income from affiliated links and ads at no cost to you to fund continued research · Information on this site is Copyright © 2023· Feel free to cite correctly, but copying whole pages for your website is content theft and will be DCMA'd.
Tagged With: Bread, Rationing, Second World War