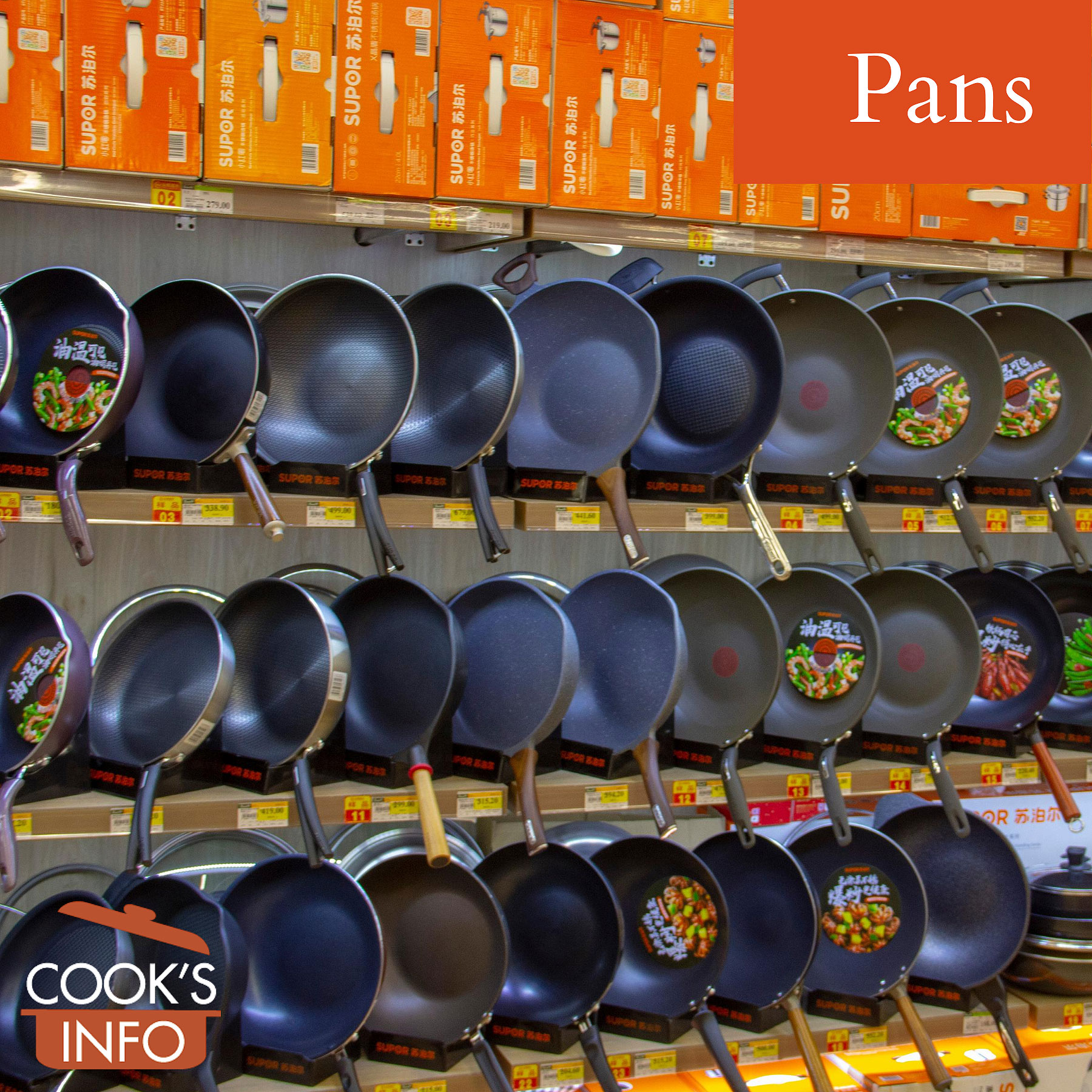 Pans are shallow, heat-proof vessels used for cooking. Their role is to contain food over heat, and deliver heat from the outside heat source — burner or oven — to the food inside. They are typically used with solid, as opposed to liquid, ingredients.

A problem arises when trying to distinguish a pan from a similar cooking vessel, which is called a “pot”.

In general, pots are for liquids; pans are for solid ingredients.

Consequently, pots are deeper, with straight up sides.. Pans are shallower, and may have sloped-out or curved sides.

Some say a pot should have two handles, and a pan only one, a longer one. In practice, most pots have one long handle.

Pots often get called pans, but pans are almost never called pots. A saucepan is technically a sauce pot, but most English speakers would never refer to a frying pot.

A chip pan is actually a chip pot.

Of course, all attempts at disambiguation go out the window with Dutch ovens and large soup kettles. 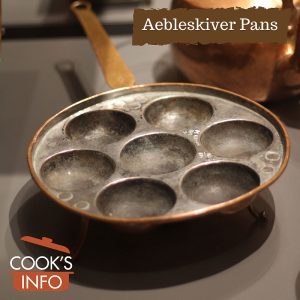 Aebleskiver pans are special pans in which to cook small Danish pancake balls called "aebleskivers" on top of the stove. You rotate the balls half-way through cooking to cook both sides. 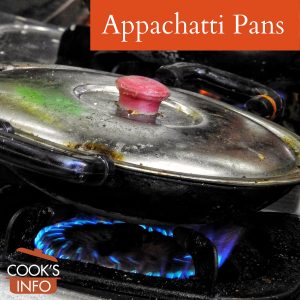 An appachatti pan is a stove-top frying pan that is completely rounded at the sides, with two short handles, one on each side, and will usually come with a cover. It is used for making vella appam. 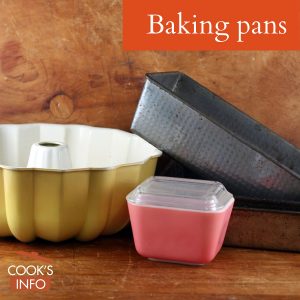 The term "baking pans" is a very broad category. It can be any shape of pan, made of any material, designed to hold any type of food stuff, sweet or savoury, solid or liquid. The common factor they will have is that they are dry-heat safe for baking food... 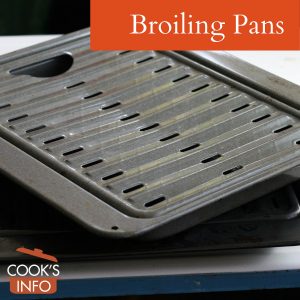 Broiling pans are special low, flat pans that come with North American stoves to help with broiling food. Many stoves come with a two-part broiling pan designed to fit nicely into a designated broiling space. 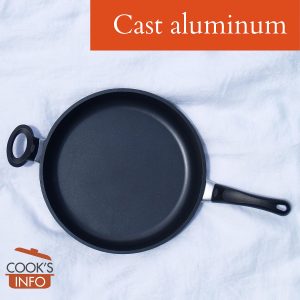 Cast aluminum cookware can be cast through die casting, mould casting, or sand casting. Die casting is the most usual. It allows for thicker cookware than sheet aluminum, and thus provides longer heat retention, similar to that of cast iron. 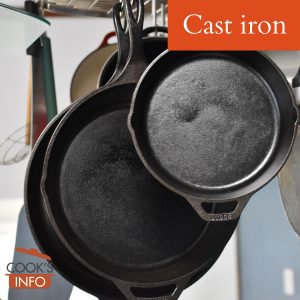 Cast iron is an iron and carbon alloy. Typically it is left uncoated in North America, but in Europe, enamelled versions are preferred. 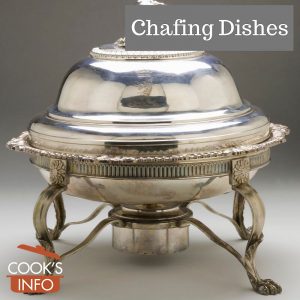 A chafing dish is a covered dish that rests over a pan of water, which in turn is over a heat source. It can be used on tables, sideboards or any surface. It can be used for both warming food, and cooking away from a regular kitchen. 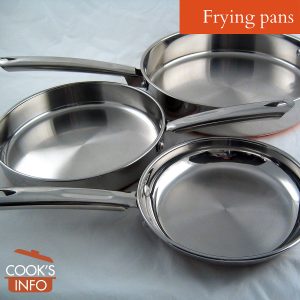 Frying pans are wide, shallow pans with a long handle and sloping sides. If it has straight sides, then technically it's classed as a sauté pan. 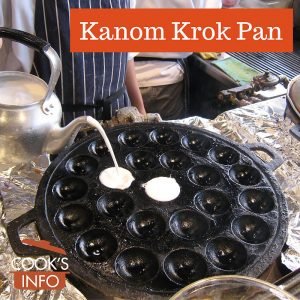 Kanom krok pans are large flat pans, often made of cast iron, with rounded cavities in them. They are used to make the fried Thai pastries known as "kanom krok." 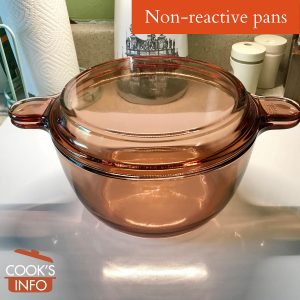 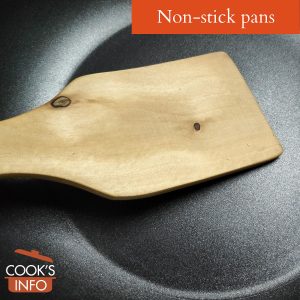 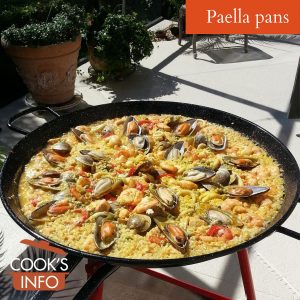 A paella pan ("paellera" in Spanish) is a very broad, round, shallow frying pan used to cook paella in. 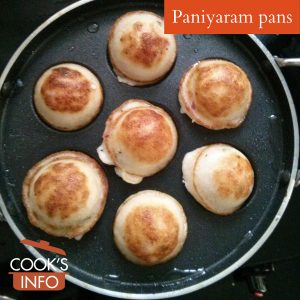 A paniyaram pan is a stove-top pan that has somewhat the functionality of a muffin tin. It is used for making kuzhi appam. 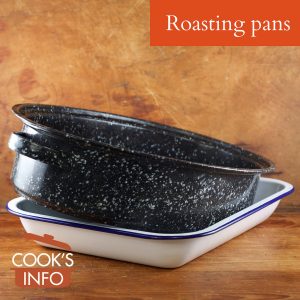 A roasting pan is used for roasting food in. Typically the food is meat such as poultry, beef or pork, but it could also be vegetables. 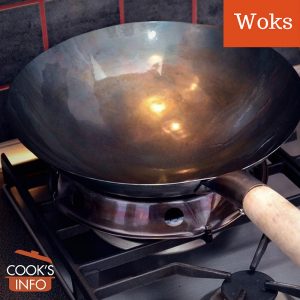 A wok is an all-purpose pan. It can be used for braising, deep frying, frying, roasting, stir frying, steaming and stewing. In northern China, a wok is more likely to be used for braising or stewing than for a quick stir-fry.
This page first published: Sep 29, 2010 · Updated: May 24, 2022.

This web site generates income from affiliated links and ads at no cost to you to fund continued research · Information on this site is Copyright © 2022· Feel free to cite correctly, but copying whole pages for your website is content theft and will be DCMA'd.
Tagged With: Cookware, Pans