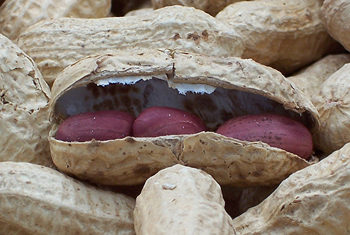 As everyone knows, Peanuts are actually not nuts, they are legumes — more closely related to a tin of mooshy peas than they are to the almond paste on your Christmas cake. But they sure do look like nuts, and you use them like nuts, so nuts they are. Plus, if you told your kids they were spreading bean butter on their toast, what are the chances they would eat their breakfast?

In about 4 weeks, the peanut plant produces small yellow flowers that last two days. The flowers are self-pollinating. Their ovary starts to enlarge, and forms a stalk (called a “peg” in the trade) which curves downward towards the soil, and when it reaches the soil, burrows down into it and grows out horizontally a bit underground. In the soil, in about a week, the tips’ stalks swell, develop into pods, and then into peanuts. The peanuts are ready to harvest 9 to 10 weeks after that. A good indication that the peanuts ready to harvest is when the foliage above ground starts to yellow, though peanuts on the same bush can ripen at different times. When they are ready to harvest, the pod will separate from the peg easily.

The shells of peanuts are soft until they are dried. The skin on raw peanuts will be white or pale pink (except on Spanish peanuts, where it is red.) When you blanch or roast them, the skins turn red and papery, and will slip off easily.

Only about 10% of peanuts are sold in their shell.

Peanuts are one of the main ingredients in dynamite.

To skin a lot of roasted peanuts, put them in a jar or container and shake them or put them in a clean dish towel and rub them. Then step outside, open the container or towel and blow all the loose skins away. Manually tackle any recalcitrant ones, if you wish,

Aflatoxin is a compound that can possibly cause cancer. It is caused by two strains of mould, Aspergillus flavus and Aspergillus parasiticus. The mould may occur while peanuts are being dried right after harvesting. Growers have now changed procedures to dramatically reduce the chance of aflatoxins developing.

You can freeze shelled peanuts indefinitely in a sealed container or freezer bag.

Peanuts originated in South America, likely Brazil or Peru. The Incas grew Peanuts, and even made decorative dishes shaped like and decorated with Peanuts.

Peanuts were brought to the American South by slaves, and planted by them. White people consider peanuts as fit only for livestock. During Civil War of the 1860s, attitudes were changed by food shortages. Soldiers on both sides would eat them. Soldiers came home, and said how good the peanuts were. By 1870, Phineas T. Barnum was selling bags of roasted peanuts at his circuses.

By the late 1800s, they appeared on streets as freshly-roasted snacks sold from carts, and as snacks at baseball games. George Washington Carver’s Peanut research at the beginning of the 1900s led to many improvements in Peanut breeding. He also recommended that southern farmers rotate cotton crops with peanut crops to reduce boll weevil infection, which they did, and the farming patterns of the American South were established for the 20th century.

Peanut butter was invented around 1890, and was popularized at the St Louis fair of 1904.

Bantu slaves had called peanuts “nguba”. This got changed by English speakers to goobers and goober peas. Other names were Pinders, Ground Peas, Groundnuts.

This web site generates income from affiliated links and ads at no cost to you to fund continued research · Information on this site is Copyright © 2022· Feel free to cite correctly, but copying whole pages for your website is content theft and will be DCMA'd.
Tagged With: American Food, Legumes