Whenever you hear the word “ribs” used by itself, it always means “pork ribs” unless specified otherwise (in a food context, that is.)

If you ever hear someone refer to “beef spare ribs”, what they mean is beef “back ribs.”

There are three types of pork ribs: two “real” (spare ribs and baby back) and one “pseudo” (country style ribs.)

You can buy special racks for your bbq or smoker that will hold the ribs up on their edges, so that more can fit on.

To stretch ribs out, some suggest cutting them up into individual rib pieces before serving, and if you’re doing buffet, putting them at the end of the buffet line-up.

If a cut by the butcher has come too close to the bone, so that the bone almost shows or “shines” through, that portion of ribs is referred to as a “shiner.” Shiner cuts are considered less desirable because the bone may just fall right out during cooking. Restaurants don’t like this because, frankly, they’ve costed out your plate of food as including a certain amount of bone.

The meat in between the ribs is referred to by professionals as “finger meat.”

Pork ribs can’t be cooked fast and at high heat. They have to be cooked slowly to tenderize them.

Though most people feel that the goal is to end up with rib meat that falls right off the bone, rib purists say not to do this. They say anyone can do this: just walk away for long enough. Instead, they feel, the meat should still be attached to the bone, giving slight resistance when you pull it, and that it should some chew and bite to it.

Enthusiasts insist that the membrane on the bone side of the slab must be removed before cooking (sometimes referred to as “skinning the ribs”.) They say that prevent the fat from rendering out and make the ribs greasy, that it will stop the back of the ribs from cooking properly, and that it will be tough and chewy to boot. Others say that if you truly cook your ribs low and slow, you won’t even know the membrane was there. In barbeque competitions, the membrane is usually removed, just to make sure.

Loin back ribs have a thicker membrane than do spareribs.

You can ask butchers to remove this membrane for you; some people just score it. To remove it yourself at home, use a dull, ordinary table knife to pry up the edges then grasp it by the edge and pull (enthusiasts use needle nose pliers.) With luck, it comes off in one piece, but have several goes at it if needed. Beneath that membrane that has just been peeled off, there’s another thinner one. Don’t remove that or the whole slab will fall apart on you.

Some say that trimming fat off pork ribs before cooking, as many modern recipe writers advise, is “crazy”; that excess fat is just going to render away, anyway.

Some like to braise Pork Ribs before grilling them; others like to grill them before braising them.

Some people like to start off cooking ribs by boiling them first. They think it tenderizes them. It also shortens the overall cooking time, and renders out and washes away a lot of fat. It also leeches away, however, the juices that would have stopped the ribs from drying out in the subsequent cooking stages, and no amount of sauce on top the meat can make it juicy again inside after that.

Purists insist on no boiling of ribs, ever, and that braising is just as bad as broiling. Boiling, they say, is extra work that only worsens the end results. They advise just low and slow dry heat cooking, all the way.

Those who like braising them anyway, will braise them for about an hour, covered, at 300 F (150 C) in a oven. The braising liquid can be a mixture of 1 part of water and 1 part of cider or wine vinegar.

Whether you boiled or braised the ribs first, or are starting with them raw, you then cook them in a barbeque over a very low heat for several hours, basting regularly with a sauce towards the end.

On a gas barbeque, turn the heat on in one half of it, very low, and then cook the ribs on the other half on top a pan or wrapped in tin foil. Plan on it taking around 4 hours. Don’t put a sauce on them during this time.

Whatever cooking methods people use or don’t use, they will all pause from arguing for a second to agree that the real secret of Pork Ribs is in the sauce. Then, they start arguing all over again, this time about the sauce.

Sauces go on towards end of cooking, otherwise, the sugars in the sauce will carmelize and burn.

Ribs are done when you to go pull two adjacent bones out. If the meat resists just a little, but then looks like it’s going to give up the bones after that, it’s done.

To cook ribs in a crockpot, put them in on low with a smidge of water or with a smidge of bbq sauce on them. When done and ready to serve, brush them with sauce, and put until broiler / grill to glaze the sauce.

To cook ribs in a pressure cooker, use about ¾ cup water and cook for 30 minutes at 15 psi (please check your manual for exact instructions for your model.) Then remove them, brush sauce on, and put under broiler / grill to glaze the sauce. 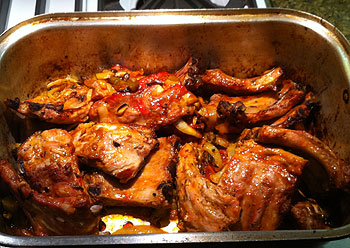 Home barbeques / grills almost inevitably turn out dry, chewy spareribs. The reason is that the secret of barbequing them is low, slow, indirect heat. Home grills are just too small to keep all the ribs away from the coals or flames. Even if the thermometer of the grill says it’s at a very low heat, that doesn’t measure the higher heat the bottom of the ribs are getting from the flame, causing them to dry out, and toughen. There’s just not enough room to keep all the ribs far enough away from the heat; you want them to be at least 8 inches (20 cm) away from the heat source. On a gas grill, you can turn the heat on on only one side, and just cook as many ribs as will fit on the unheated side.

Or, you can cook in oven first, and give finishing touch on your grill. To do this, wrap ribs in foil, rubbing first with a dry rub if desired, and if desired, sprinkling with natural wood smoke liquid, using about a tablespoon per pound. The foil prevents the meat from drying out, particularly the edges. Bake them at 325 F (160 C) for 1 ½ to 2 hours. Test for doneness. For meat that falls off bone, you’ll probably want another 30 minutes or so. Then unwrap, serve as is with a sauce (discarding juices in the tin foil) or finish off on grill. To finish off on grill (you can prepare up to this step the day before, refrigerating the cooked ribs over night: if so, take out of fridge half hour before using, let warm up to room temperature a bit.) Unwrap, discard juices. Separate ribs into serving size sections. Brush with a barbeque sauce, grill for about 10 minutes turning frequently on the grill until sauce is caramelized.

Use raw Pork Ribs within 3 to 4 days of purchase, or freeze for up 3 months.

McGee, Harold. The Secret to Ribs Is Already in the Kitchen: The Oven. New York Times. 29 June 2010.