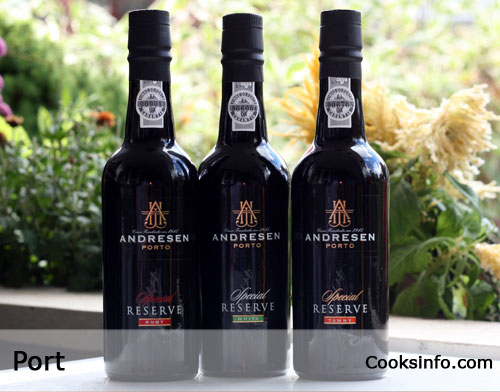 Port is a strong, sweet wine. Grapes are fermented, then a grape alcohol (basically, brandy) is added at a certain point to stop the fermenting. This ensures that some sugar remains to make the wine sweet, plus kicks up the alcohol content a bit. The alcohol content of port will be about 20%, compared with 13% for a normal wine. When the fermentation is interrupted determines whether the Port is sweet, semi-dry, dry or extra dry.

Grapes for the most expensive ports are still crushed by foot.

Bottle-aged ports are ports that are bottled before they are ready to drink and allowed to age in the bottle. Some are even aged for a year or two in wood first before bottling and further aging. Most Vintage Ports are bottled-aged.

Wood-aged ports are aged in wood caskets and are ready to drink when they are bottled.

Decanting port is only necessary if you have purchased a port — probably a Vintage Port — that has sediment on the bottom. These will be bottle-aged ports. Before decanting, ensure that the bottle has sat upright for at least a day. Some like to decant in front of a candle so that they can watch where the sediment is in the bottle as they are decanting. You can also buy specially-made port filters to catch the sediment, should your hand and eye coordination be less than perfect.

Port is used in making Cumberland Sauce, which has in it red currants, orange peel, pepper, mustard and port.

Opened, unfinished bottles should be stored in the refrigerator. Many port aficionados say plan to use up within 7 to 30 days, and after that, treat it as a cooking wine.

In the 1700s, Port was a strong, dry wine known as “blackstrap”. Shippers began adding brandy to the wine after it was finished, to make it stand up better to shipping. It’s not known exactly how the brandy came to be added before the wine was finished fermenting. But Port as we know it was being made by the 1830s.

Port used to be a drink for men. The only women who did drink it were East End London ladies with questionable reputations, who preferred it with a
squirt of lemon in it. As of 2004, however, the percentage of female port drinkers had risen to 46% — and they were apparently drinking it without the lemon. Port had also come to be perceived as an old person’s drink. But by 2004, 25% of port drinkers were under 35.

Port used to be made only in Portugal up until 1986, but it is now being made in other parts of the world. Portuguese Ports are now labelling themselves “Porto” to help consumers distinguish “the real stuff”.

Port lees, curiously enough, used to be used in making pins. This account is from a 16-year-old George Fraser (at school at Gawcott, Buckingham, England) to his father Edward Satchwell Fraser, Inverness, Scotland 19th July 1816: “We went to see as also the Pin Manufactury there we saw there the drawing of the wire to make it thinner which is done by a set of boys who cut it into the proper lengths it is then delivered to another set to be cut again the next stage is the giving the point to the lengths which is done by boys also, another boy puts the heads on they’re then given to the women who boil them in a solution of the lees of port wine and tin they boil these for 4 hours then taken out put into bran well shaken scoured in another mixture the ingredients of which I could not learn taken out again put into bran and then delivered to twenty or thirty little girls who stick them into the papers with amazing agility each of these sheets contains so many thousand pins and 12 of these sheets make a parcel now they are delivered to a man and woman who make them into these parcels and pack them up for exportation. I have now given you the whole history of pin making to the best of my knowledge.”

Port is usually served after meals. At the table, port is not served but passed around, right to left, for people to serve themselves. But remember to proactively pass the port to others, as it’s considered rude for people to ask for port. If someone doesn’t pass the port, you can politely tease them by asking “Do you know the Bishop of Norwich” or “Do you know Dr Wright of Norwich”? The Bishop, or Dr Wright, was known as someone who didn’t pass the port. Some English port decanters had rounded bottoms so that they couldn’t be set down in mid-journey around the table.

The Bishop of Norwich version holds that the Bishop, though exactly which one isn’t stated, was stingy with his port; Dr Wright was apparently a much sought-after speaker and dinner table guest in the Victorian era who would launch into a story while the port was going around and neglect to pass it.

“Some gentlemen will have, and ought to have, port. One of the best and wisest men I ever knew said to me, I am old, and can bear plain-spoken language—“Why should I be compelled to drink light Claret that is like red ink? My dear Madam, it gives me the stomach ache. I like Port Wine, and when I have it , I like it stiff . My grandfather drank Port Wine, and he sailed round the world with Captain Cook. My great-grandfather drank Port Wine, and he fought at the battle of Blenheim. Let me drink Port Wine, and thank God for it, as my ancestors have done before me.” — Sala, George Augustus. Lady Chesterfield’s Letters to Her Daughter. London: Houlston and Wright. 1860. Page 98.