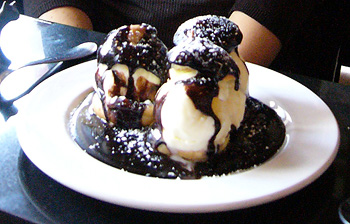 A Profiterole is a small puffed hollow pastry round made from choux pastry dough, typically piped onto a baking sheet and baked.

Despite the simplicity of the definition, some confusion has emerged from varying opinions as to the use of these baked pastry rounds.

Larousse Gastronomique is very clear: the term Profiterole refers to the baked pastry round, regardless of its intended use, not to any dish made with them or any particular filling put in them. Larousse says that sweet uses include drawing on them as building blocks in desserts such as Croquembouche and Gâteau St-Honoré, or serving them on their own with fillings such as custards or jams [1]; savoury uses can include filling them with purées of meat or game, or cheese (see Gougères.) Savoury Profiteroles are used to garnish soup or can be served warm as hors d’oœuvres.

To make Profiteroles, choux pastry dough is first made. This dough is then piped or spooned onto a greased baking sheet, and baked. 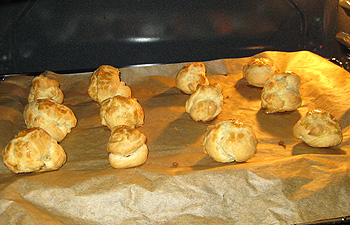 The pastry balls end up crispy on the outside, and inside having hollow centres with silken interior dough walls. The hollow space is destined to hold a filling, that can be piped in by injecting the filling via a sharp tip put on a piping bag, or you can slice off the top, fill, and put the slice back on.

The most common appearance of Profiteroles is with some kind of cream inside (pastry cream or whipped cream), then drizzled with a chocolate sauce or glazed with caramel. In North America, you will often see ice cream as the filling as no special kitchen skills are required to scoop ice cream (compared with making pastry cream, for example.)

[1] By the 2001 edition of Larousse, Larousse had included ice cream in the list of possible fillings. This possibly occurred in the 1988 edition, but we did not have access to that edition at the time of writing.

For the recipe, see the entry on Choux Pastry.

Profiteroles can sometimes deflate after cooking. One trick is to remove them from oven, turn off oven, poke a hole or two in each with something like a Turkey Lacer needle, then put back in the turned-off but still warm oven. Or, some recipes have you change the baking heat part way through baking.