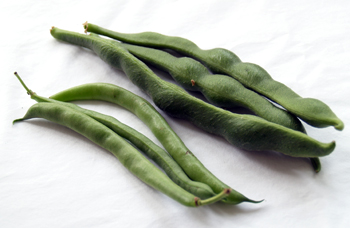 Runner Beans look like somewhat larger versions of what North Americans know as Green Beans or String Beans. There are a few differences, other than just size. Runner Beans are a perennial plant, whereas Green Beans are annuals. When the Runner Bean seed first starts to grow, the stem and the first set of leaves are the first thing to emerge from the ground. When a Green Bean seed starts to grow, the first thing to emerge from the ground is the two halves of the seed. Runner Bean vines twist clockwise, Green Bean vines twist counterclockwise.

The main difference from a gardening point of view, though, is that with their showy flowers, Runner Beans double as an ornamental plant. Green Bean vines just put out small flowers; Runner Bean vines will put out inch long (2.5 cm) flowers, often a flashy orange colour, about 20 flowers to a stalk. Hummingbirds and bees love Runner Bean flowers.

Varieties that put out scarlet-coloured (actually orangish-coloured) flowers include “Scarlet Emperor” and Scarlet Runner. The white-flowered varieties include Czar and White Runner.

When very young, you can use Runner Beans raw in salads, but otherwise you will want to cook them. They don’t need to be podded or stringed; just slice and boil or steam until tender. Very old ones, though, may need stringing.

Some sources say that the tuberous roots of the plant can be toxic; others say that they are eaten by native South Americans.

To freeze, top and tail them, cut into short pieces, blanch for two minutes, drain, pack and freeze for up to one year. 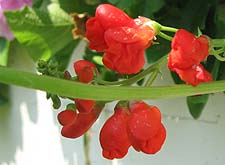 In the 1630s, a man named John Tradescant, Sr, was the gardener for Charles 1st at Oatlands Palace, Surrey. American colonists had discovered and started growing Runner Beans. Tradescant learnt of them, had some sent over to him in England, and began growing them in the royal gardens in 1633 — for the sake of their bright red flowers! They were used for decorative gardening purposes up until about the mid 1700’s, at which point they began to be used for food. Many people in Southern England still train them on trellises for their appearance.

Tradescant was also a well-known collector of curiosities. Upon his death, he willed his items to a Elias Ashmole, who in turn passed the collection to Oxford University, where it became the basis of what is known today as the Ashmolean Museum, the oldest public museum in Britain.