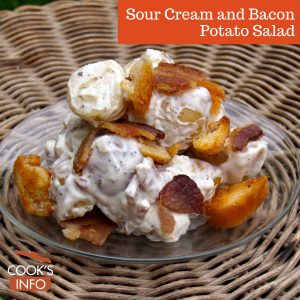 A very simple potato salad to make, but the pieces of crispy bacon and crispy bread that garnish it give it wow factor. A bowl of this will disappear in no time flat.
Print Recipe Pin Recipe
Prep Time 25 mins
Cook Time 20 mins
Total Time 45 mins
Course Salads
Servings 4

Use American-style (streaky) bacon. If you want to get fancier, you can use pancetta instead of bacon. Instead of salad potatoes, you can use new potatoes or waxy potatoes.
Tried this recipe?Let us know how it was!
This page first published: Mar 9, 2005 · Updated: Jan 18, 2021.

This web site generates income from affiliated links and ads at no cost to you to fund continued research · Information on this site is Copyright © 2022· Feel free to cite correctly, but copying whole pages for your website is content theft and will be DCMA'd.
Tagged With: Bacon, Bread Crumbs, British, Potato Salad, Salads, Sour Cream, Victoria Day