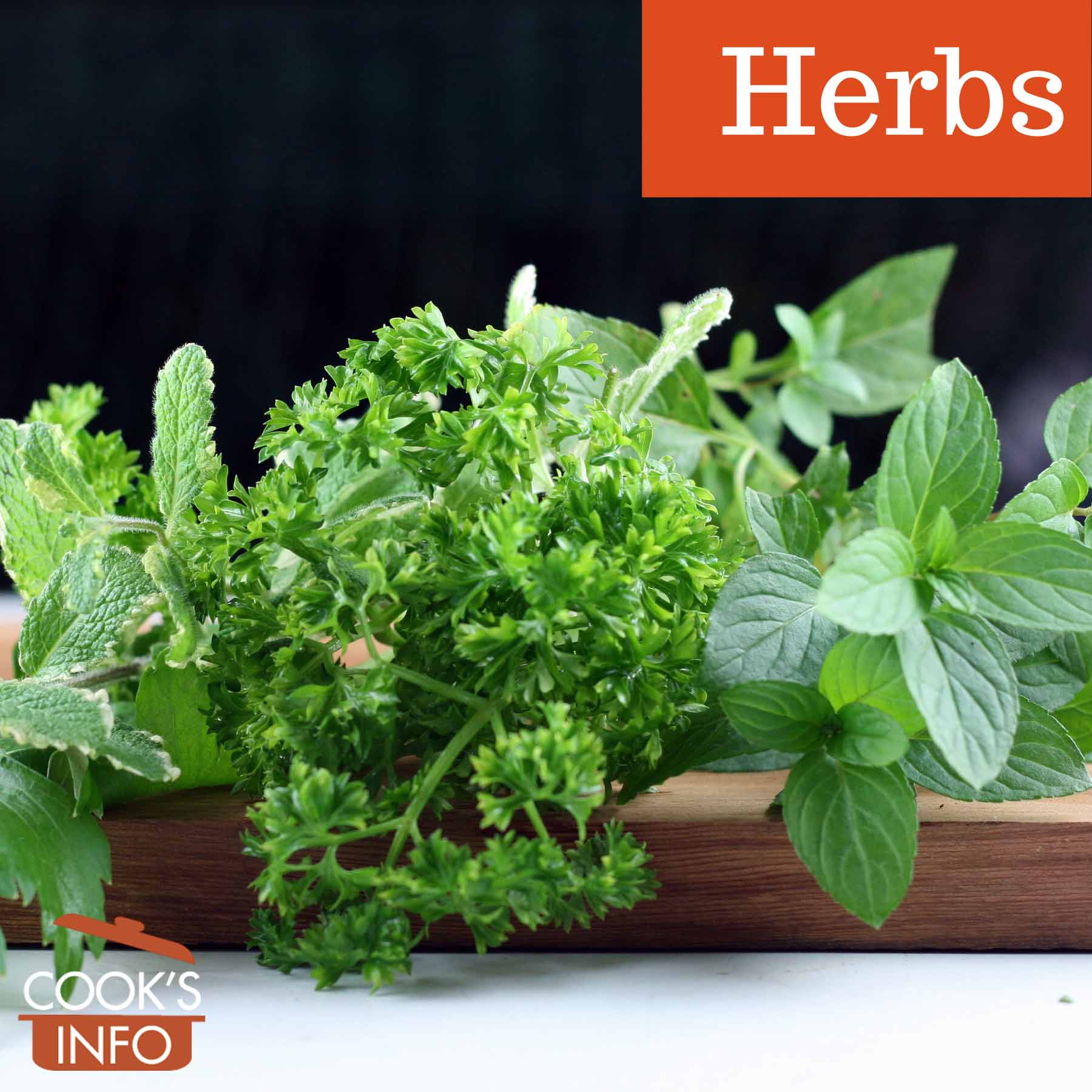 Herbs are plants whose leaves are used in small quantities in cooking primarily for their ability to add flavour or aromatic properties to food.

When the bark, seeds, or roots of a plant, even those same plants, are used, those parts are referred to as spices.

Herbs can be used fresh or dried.

“While fresh herbs may appear best, they are not always available, they have a short shelf life, and need to be stored carefully. Dried herbs provide the same great benefits. Fresh herbs are best when used to finish a dish, and should be added at the end of cooking. Some of the best fresh herbs are basil, dill weed, chives, cilantro, mint, parsley, and tarragon. Use dried herbs earlier in the cooking process, so that their flavor has enough time to infuse the whole dish. The best dried herbs are bay leaves, marjoram, oregano, rosemary, sage, savory and thyme.” — Rubin, Emily, Clinical Dietitian. National More Herbs, Less Salt Day. Thomas Jefferson University. 29 August 2018. Accessed July 2021 at https://blogs.jefferson.edu/atjeff/2018/08/29/national-more-herbs-less-salt-day/

While they may contain some micronutrients, they are not primarily used for nutrition. They are rarely used in quantities large enough to count as a significant ingredient (parsley in tabbouleh, and basil in pesto sauce, would be notable exceptions.)

Planning to always have fresh herbs on hand

Every food writer seems to feel it is de rigeur now to micro-manage you in your kitchen, right down to telling you to reach for fresh oregano. Should you reach for the dried instead, you can almost feel the thwack of the ruler on the back of your hand. At the same time, they lecture you to buy or use only what is in season locally. Occasionally, they will remember that olives are never actually in season in New York or London, but when it comes to herbs, there’s always a disconnect. What are the chances of clipping a spring of fresh parsley from your backyard when it’s February in Chicago and everything is under 4 feet of snow?

Leaving aside the usual dash to the store for an expensive bunch of fresh herbs, of which of course you will use one sprig and then let the rest moulder away in your fridge, these are the ways that you can always have herbs on hand.

When harvesting fresh herbs, only do it from mature plants that have had time to settle in. Leaves are at their most flavourful before the afternoon sun has been pounding down on them. (Useless, advice, granted, given that most of us get home from work at the end of the afternoon.) The higher up the leaves are on a stalk, the younger they are and the more flavour they will have. Harvest those; that will also encourage more growth on the plant.

Shake each stalk that you clipped to dislodge any small insects that you might not see. Pick off any dead leaves, then wash in cold water. If you are harvesting them with a view to making dried herbs, dry them very well so that mould doesn’t set in. If you are going to chop them up and toss them into a potato salad right away, then don’t sweat much more than a quick shake over the sink to remove excess water.

Many herbs are touted as having various health benefits; indeed, potential health benefits have been backed up by some research studies. However, it’s not clear if you would ever actually consume enough quantities of the herbs, or for a long enough period, to ever receive any of the potential benefits. The most that serious health researchers will say is just “enjoy herbs for their taste.”

When a recipe calls for 1 tablespoon of fresh herbs, you can use 1 teaspoon of dried.

If you are going to use a bundle of fresh herbs up in the next few days, treat them as you would fresh flowers. Put them in a glass of water (just to be clear: so that their stems are in water but so that the leafy bits are above the water in the glass). If the top shelf in your fridge is cold because it’s close to a freezer above that, put the herbs on the second or third shelf in your fridge (if those shelves are tall enough) so that the herbs don’t get “frost-bitten” causing them to wilt.

If you plan on using the herbs up in a week or two, wash them, chop them up, cover with olive oil and refrigerate until needed. Don’t try to store them much longer than that with just olive oil on them, as it won’t be acidic enough to really preserve them for any length of time.

Freezing herbs: if you don’t have a regular or reliable source of fresh herbs, buy them when you can and freeze them. If they’re packaged well, put the whole pack in the freezer; when you want some herb, just quickly crumble the desired amount in/on your food. If they’re not packaged, chop first (saves you time later) then pack in ice cube trays, cover with water, freeze, then pop the herb cubes out into a freezer bag. Instead of water, you can use vinegar or white wine.

Many people recommend making herbed ice cubes to float in drinks or chilled soups. You put a few herbs in each ice cube tray square, top with water and allow up to 6 hours for them to freeze, depending on how powerful your freezer is. It seems like a lot of futzing, however, just to have people holding their drinks up to the light and wondering if that’s a bit of weed in their ice cube.

You can mix leftover fresh herbs into some creamed butter, and freeze in small pats wrapped in plastic wrap or in small tubs. Voilà: instant herb butter, without having to dash out to the stores for it when you least have the time.

You can also dry them (see entry on Dried Herbs.)

There is so much folklore and urban myth attached to herbs. All of it is best reserved for fond dreams and children’s tales.

Scarborough Faire, of “parsley, sage, rosemary and thyme” fame, was a real, annual fair in the seaside town of Scarborough, North Yorkshire. The fair was first held in 1253. Each year, it lasted for six weeks, from Assumption Day till Michaelmas Day (45 days: 15 August to 29 September), and was open to tradesmen of any and every trade. It petered out in the 1700s, with its final year being 1788.

The Roman word for herb was “cuminum” singular, “cumina” plural.