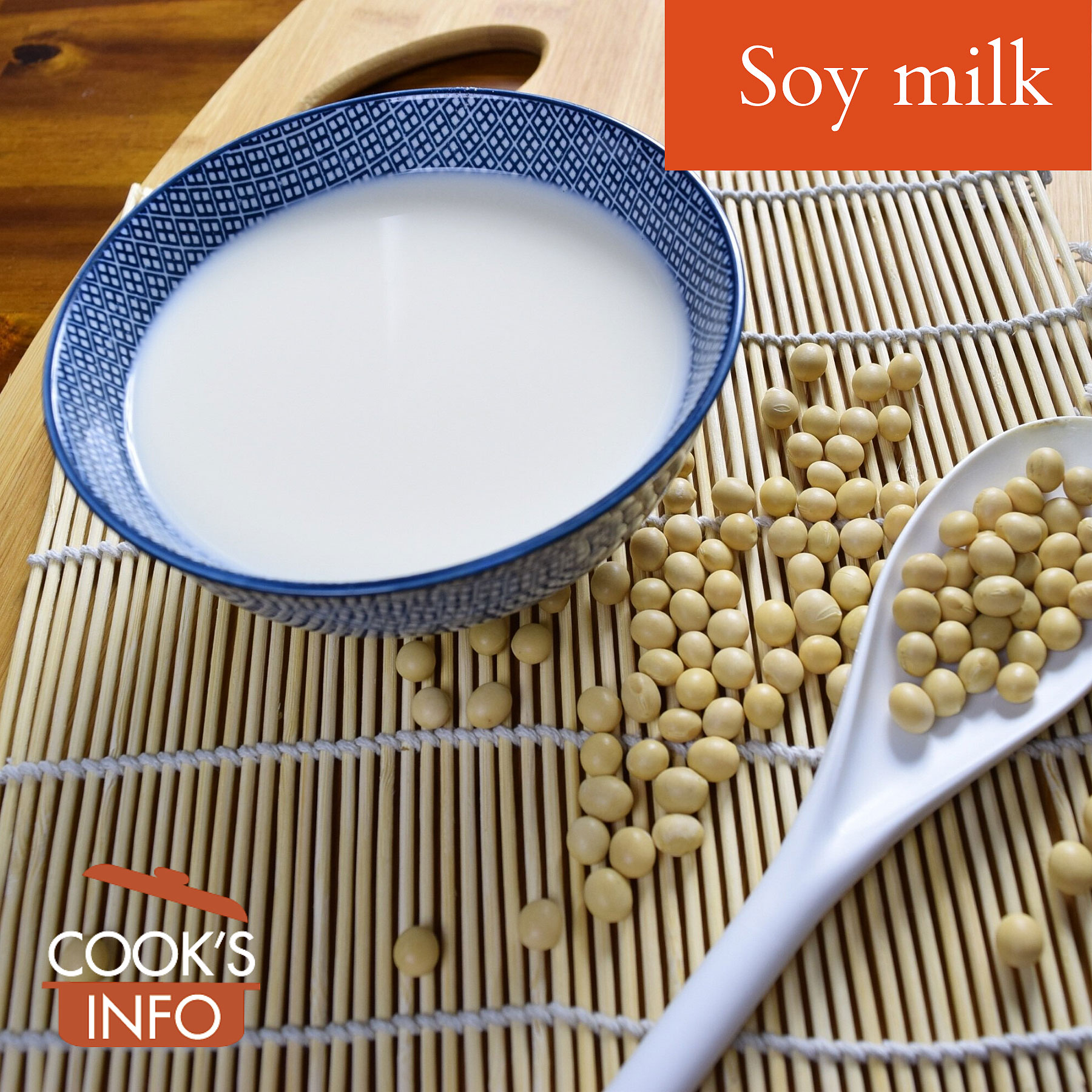 Soy milk is a white liquid made from water and soy beans.

There are different techniques of making it.

In the Japanese way of making soy milk, uncooked soy beans are soaked in water overnight. In the morning they are drained, then mashed with some boiling water, so that they look like gloopy mashed potatoes. More boiling water is added, and the mash is simmered for at least 10 minutes. This not only helps to break down the beans further; the cooking time also destroys a protein in the bean which would otherwise make soy’s much-vaunted protein unavailable to our digestive systems. An anti-foaming agent is often added to stop it from boiling over. After the cooking, the mixture is then strained.

In the Chinese way of making it, the liquid is strained first, then boiled.

The “okara” can be used in baked goods, for livestock feed, or as compost for the garden or fields.

It’s a Western practice to aim for soy milk that tastes like cow’s milk – though not many people will feel that we’ve succeeded. The Chinese version has more of a vegetable flavour.

The Chinese mostly use soy milk to make bean curd (tofu), though sometimes they will drink it served warmed in small bowls for breakfast. In Northern China, you dip a shao bing into it; in Taiwan, pieces of a steamed sponge yellowish cake called “ma la gao.”

In the West, where soy milk is treated as a non-dairy alternative for milk, including drinking straight up and pouring on cereal, the most delicately flavoured soy beans are used.

Every brand of soy milk will taste very different from all the others. In the search for one you like, old hands say, expect to dump a few down the sink.

Soy milk is sold either in cartons or bottles in the dairy chiller section of supermarkets, or in shelf-stable tetra-paks.

Soy milk will not curdle when boiled, but a skin will form on the surface.

Some soy milks may be fortified with calcium, to bring them closer to the nutritional profile of dairy milk, but this may not always have the benefit that consumers hope for. It’s a question of how “bioavailable” the added nutrient to a product actually is:

“One study of soy drinks fortified with calcium, showed that the form of calcium salt added was quite insoluble and just ended up coating the bottom of the carton.” [1]What are functional foods?. In: Food as Medicine. Module 3.17. Monash University, Australia. Accessed March 2021 at https://www.futurelearn.com/courses/food-as-medicine/16/steps/1062544 [2]Heaney RP et al. Bioavailability of the calcium in fortified soy imitation milk, with some observations on method. Am J Clin Nutr 2000; 71:1166-69.

Shaking the carton before each use may help somewhat:

“The unshaken samples had measurable calcium that averaged just 31% of the labeled content. Shaking resulted in improvement to a mean level of 59%, still well short of the labeled content. In all cases the calcium residue made up for what was missing from the poured servings. The foregoing average values obscured large differences between products. Two, when shaken, contained a level of calcium consistent with the label, while one failed to reach even 20% of the labeled content…” [3]Heaney RP and Rafferty K. The settling problem in calcium-based soybean drinks. (Letter) J Am Diet Assoc 2006;11:1753-1754.

This web site generates income from affiliated links and ads at no cost to you to fund continued research · Information on this site is Copyright © 2022· Feel free to cite correctly, but copying whole pages for your website is content theft and will be DCMA'd.
Tagged With: Asian Food, Milk, Soybeans