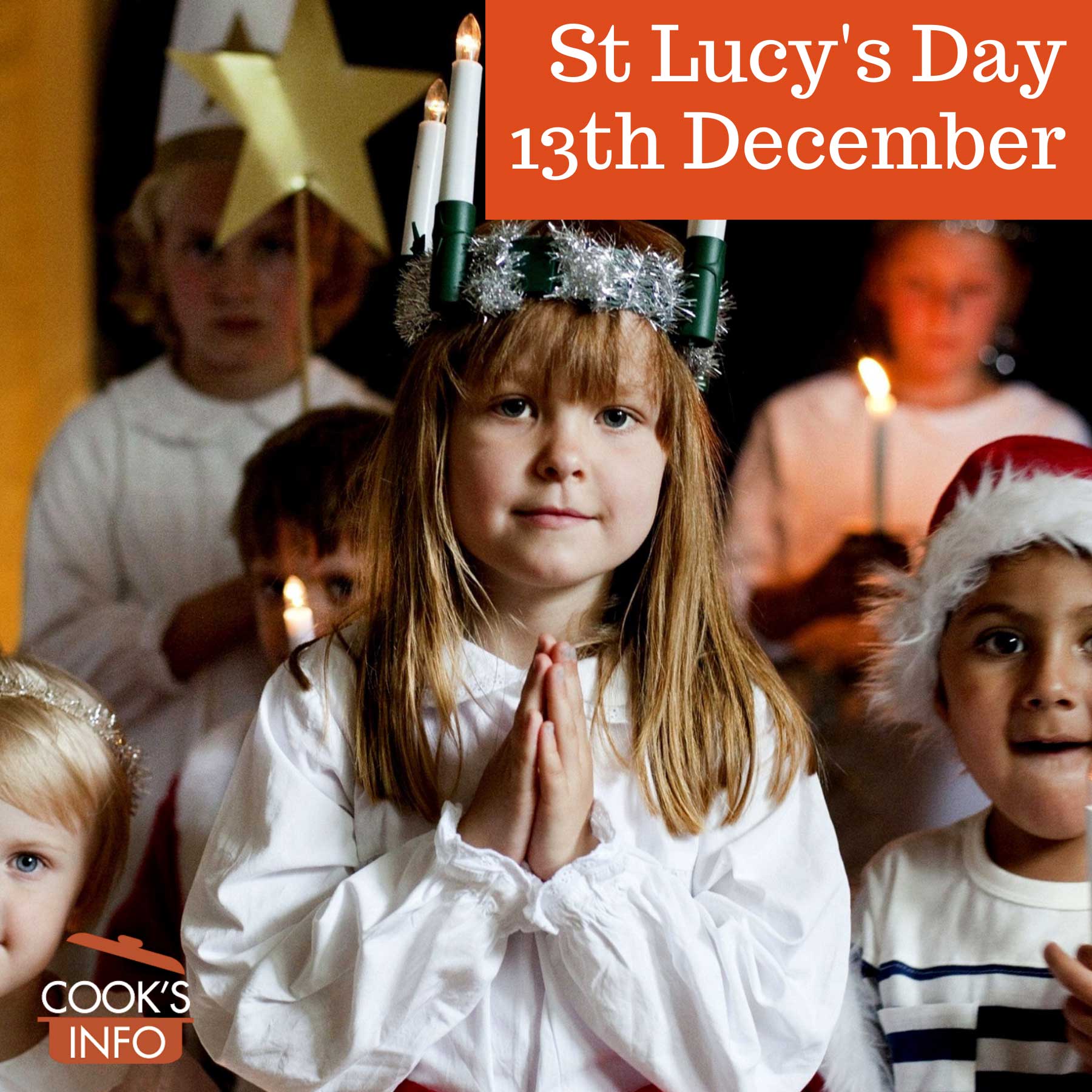 In Sweden, the 13th of December is called “Luciadagen.” It marks the start of Christmas celebrations in Sweden, and the start of a festival of lights.

Many traditional baked goods and other foods are made. The day is also celebrated with special foods in other countries as well.

St Lucy celebrations got mingled with old pagan winter solstice customs. A young woman would dress up in white and go from house to house with a torch bringing baked goods, often cat-shaped ones flavoured with saffron called “Lussekatter” (Lucy’s cats.) 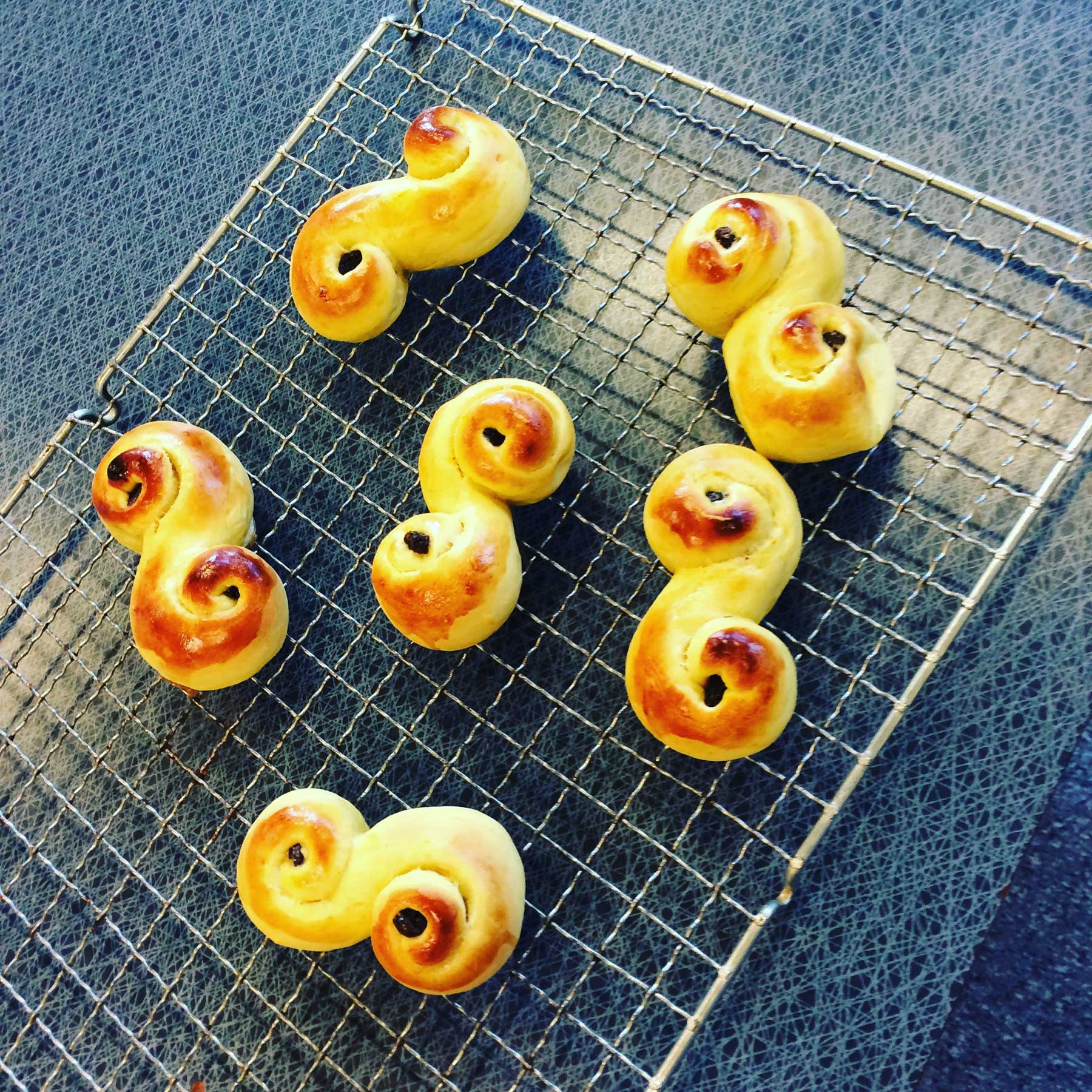 The Nordic goddess, Freya, had driven a chariot pulled by cats. In Scandinavia, any turning motions — spinning, grinding, even stirring — were said to be bad luck as they might interfere with the change of direction the sun was undergoing at Solstice. Lucy candles are lit in some homes still in Scandinavia. 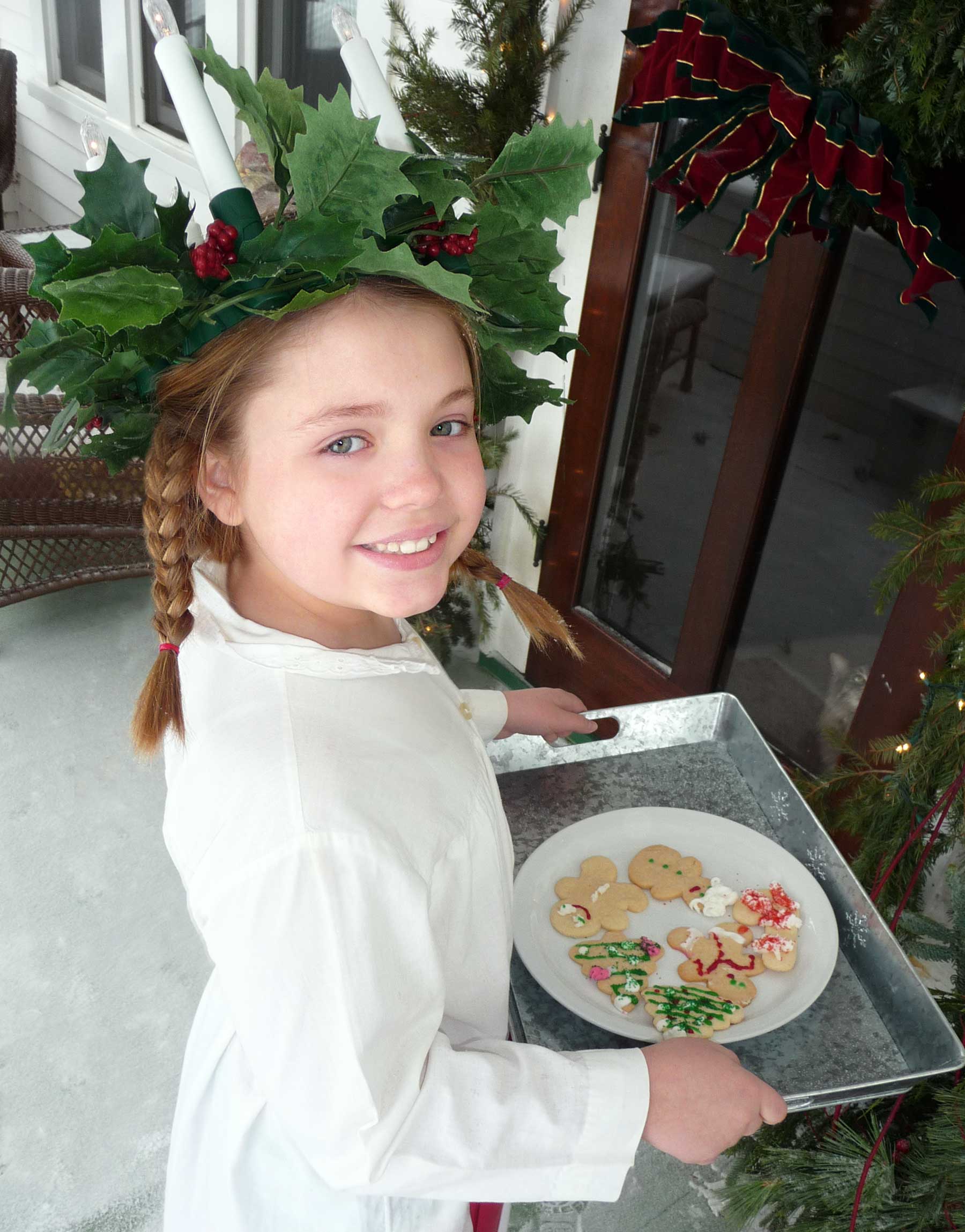 In Croatia, whole seeds of wheat are arranged around the edges of a round plate or dish, wetted, and left to germinate. By Christmas Eve, they have wheat sprouts. In some parts of Croatia such as Gorski Kotar, a floating candle is placed in the centre and lit; in other parts, they’re tied together with a red, white and blue ribbon. In southern and north-eastern Croatia, it is St Lucy who brings presents to children.

She is also the patron saint of Syracuse, Sicily, where she is called “Santa Lucia.” In 1582, she was credited with causing a ship with wheat to come into the starving city. The people were so hungry that they cooked and ate the wheat without grinding it into flour. Now, on St Lucy’s day in Sicily, nothing is made with flour in memory of that day. Instead, in Palermo, Sicily, a breakfast porridge called “cuccìa” is made from wheat berries. Later in the day, a bean soup also called “cuccìa” is made from fava beans and wheat berries. 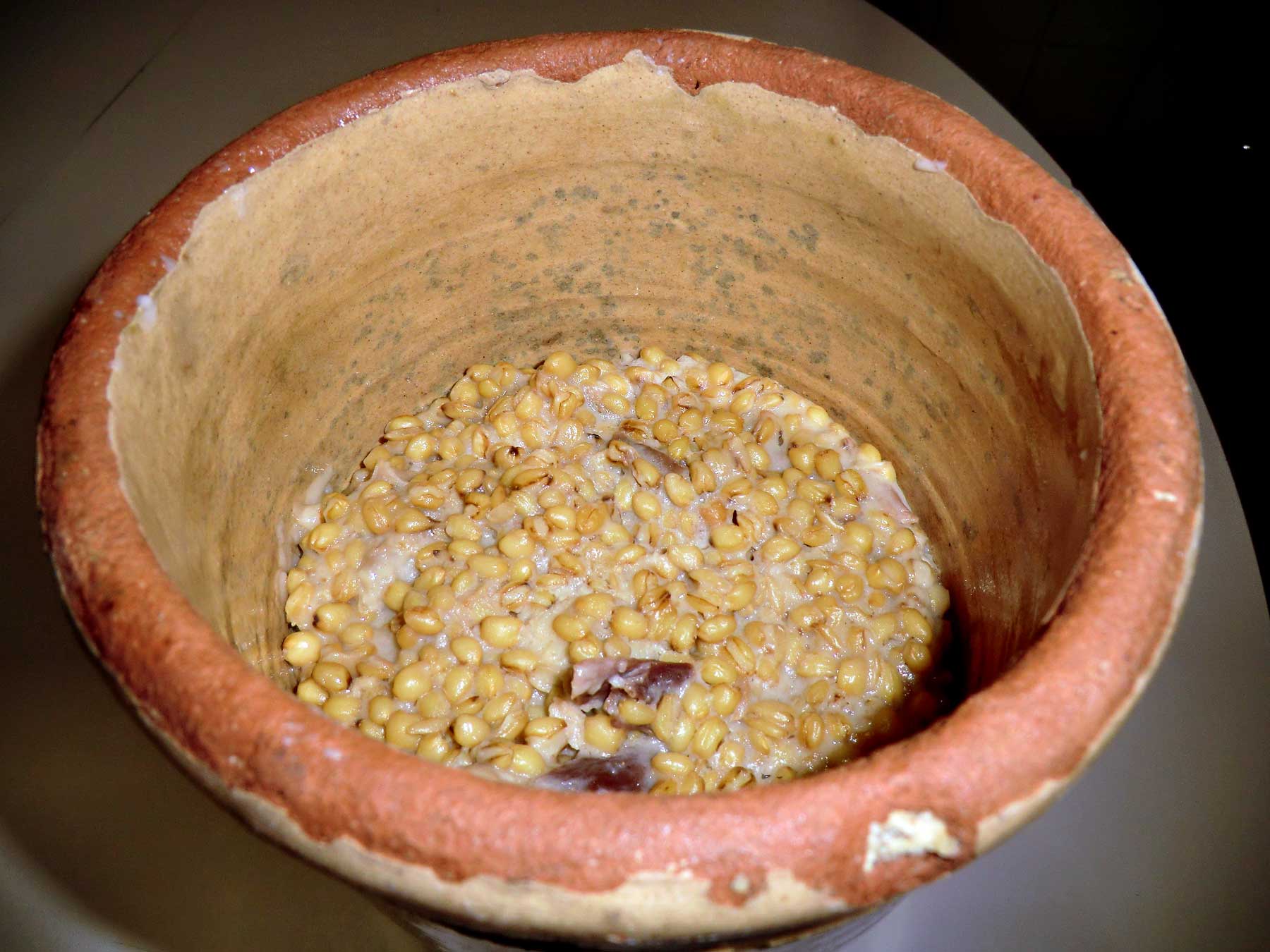 St Lucy was martyred in 304 AD on 13th December which, in the Julian calendar of the time, was the Winter Solstice.

“In the old medieval calendar the ″Lussi″ night between Dec. 12-13 was the longest night of the year and associated with mysterious happenings. Country folk believed all children should be christened before Lucia or the devil could take them from their parents.” — Haglund, Annica. Golden-Haired Women Awaken Nobel Laureates On Lucia Day. Associated Press. 12 December 1990.

The remains of St Lucy are in the church of Santa Lucia, Venice, brought there from Constantinople around 768 AD (some say 1204 AD).

It is not exactly clear how an Italian saint came to become celebrated in Sweden: “The first accounts of Lucia celebrations in Sweden date to the 17th century.” [1]Haglund, Annica. Golden-Haired Women Awaken Nobel Laureates On Lucia Day 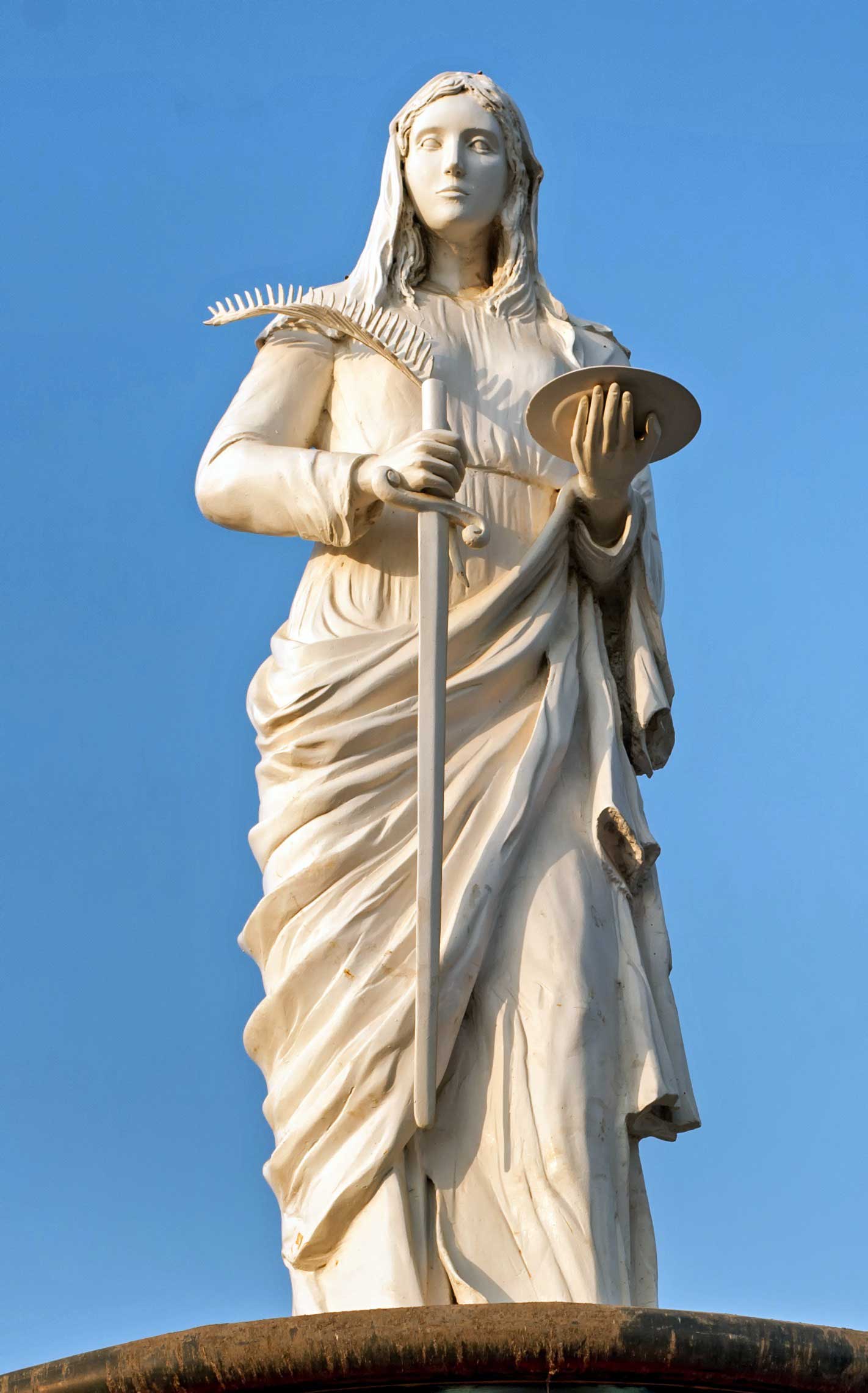 “Since shee enjoyes her long nights festivall,
Let mee prepare towards her, and let mee call
This houre her Vigill, and her Eve, since this
Bothe the yeares, and the dayes deep midnight is”
— John Donne (1572 – 1631). “A Nocturnal Upon St. Lucy’s Day.”

The Nobel prizes are awarded yearly in Stockholm, Sweden on the 10th of December. Nobel laureates who opt to stay a few days after the ceremonies get involved in the St Lucy Day celebrations:

“Some Nobel Prize winners will wake up Thursday in their hotel rooms surrounded by golden-haired young women with candles on their heads, singing carols… The festival falls three days after the Nobel Prize awards ceremony. Many of the scientists, authors and statesmen are still on hand, giving lectures and participate in seminars.

Gun Lannergren, who has directed the processions at the Grand Hotel for 15 years, said the laureates always are told in advance about the 7 a.m. Lucia Day wakeup calls. With the laureates’ agreement, young music students are given keys to enter their rooms and awaken them with song.

″The girls go from room to room and sometimes the laureates join the procession in their pajamas to hear the girls sing once again,″ said Lannergren.” — Haglund, Annica. Golden-Haired Women Awaken Nobel Laureates On Lucia Day.

They are also invited to more St Lucy celebrations later in the day:

“…Later that day, if you haven’t already had enough partying, laureates are invited to attend student Lucia parties, an informal and riotous evening of food, singing and drinking.  —Frantz, Simon. Six tips for surviving the Nobel prize festivities in Stockholm. Manchester, England: The Guardian. 8 December 2011. 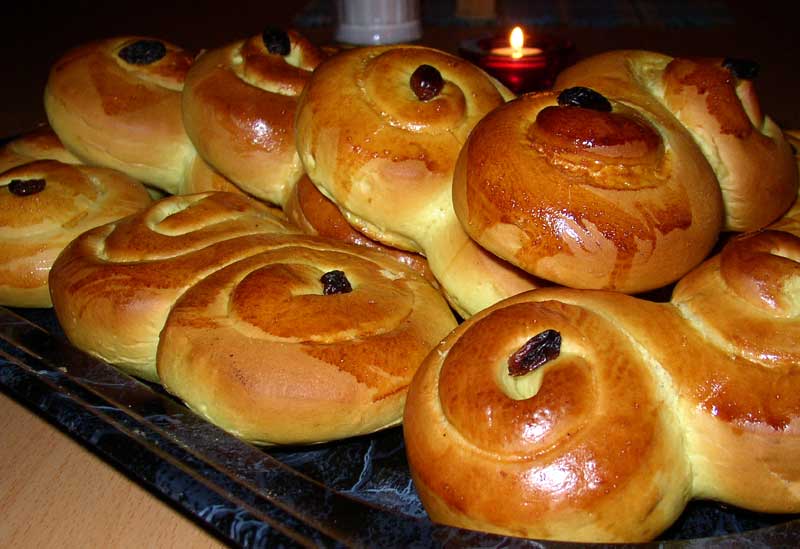