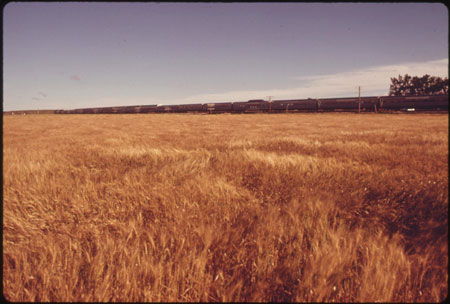 Wheat is a grass that produces an edible seed, the wheat grain. It is the only grain that can make a gluten strong enough to make decent raised breads.

It has become fashionable to deprecate wheat as lacking in nutrition compared to other grains, or to attach to it some kind of inchoate sense of representing all that is wrong with agriculture and food. But, as in all things, a little knowledge can be a dangerous thing, and for close to 5,000 years now, humanity has prized wheat for good reason: “In a good harvest, an area the size of a football (soccer) pitch can produce enough wheat for 12 and ½ thousand loaves of bread.” [1]Case study: bread. Module 1.5, From Waste to Value: How to Tackle Food Waste. University of Reading / EIT Food. Accessed Nov 2020 at https://www.futurelearn.com/courses/from-waste-to-value/1/steps/906439

There are three types of wheat: hard, which has good gluten for bread; soft, which is for pastry and cakes; and durum, which is good for pasta and noodles.

All cuisines on earth use wheat in some form, whether as noodles, pasta, or bread. Globally, we need to grow 50 wheat plants a day per person on the planet to meet this need:

“Cereal crops (such as wheat) provide 70% of the world’s calorific needs. One of the reasons for this is because cereals are very good at producing a lot of energy per unit of land, compared to other plants or with animals. This means you can produce more food on a smaller area of land. Cereals also grow over a wide range of climates; for example, wheat, rice and maize are grown in every continent (except Antarctica). On average, every single person around the world eats roughly 50 wheat plants per day.” [2]University of Cambridge. Case study: engineering wheat of the future Module 1.11, Improving Food Production with Agricultural Technology and Plant Biotechnology. Future Learn. Accessed August 2020 at https://www.futurelearn.com/courses/food-production-agricultural-technology-plant-biotechnology/3/steps/715048

Most wheat is consumed in the form of flour. “It takes around 350 ears of wheat to make enough flour for one loaf of bread. And despite ever-improving efficiencies in flour mills, the loss in weight from wheat to flour is approximately 20%.” [3]Case study: bread. Module 1.5, From Waste to Value: How to Tackle Food Waste. University of Reading / EIT Food. Accessed Nov 2020 at https://www.futurelearn.com/courses/from-waste-to-value/1/steps/906439

Store wheat germ in the refrigerator to stop it from going rancid. As whole wheat flour has wheat germ in it, store it in a cool place as well.

Before man used wheat to grind for flour for bread, he used it to make bulgur wheat with.

The Egyptians were the first to discover that wheat had enough gluten to make good raised breads, around 2,500 BC. This was enough to make wheat more desirable than the other grains they had: barley, millet, rice and oats. Egypt became a massive producer of wheat , exporting it in huge ships, and after the Roman conquest, Egypt became the bread-basket of the Roman Empire.

The Romans called wheat “frumentum.” Most people ate it as a boiled dish, sort of like polenta, with flavourings added to it. Soldiers, though, insisted on their wheat being made into bread.

The first windmill in the UK for grinding wheat was built in 1191 AD, in Bury St Edmunds, Suffolk.

Sieves made of hair were invented around 1050 AD, which meant that more bran could be sifted out, making white flour more refined. Sometime after 1700, sieves made of silk produced even whiter white flour.

In France, wheat production was severely controlled in 1664 by Colbert, Louis XIV’s Minister of Finance, in order to encourage and protect regional producers of chestnuts. The regulations lasted for about 100 years, pushing the price of wheat and bread even further out of range for French peasants.

Wheat was brought to the Americas by the Spaniards and the English. Threshing machines were invented in 1831. A modern combine can do the wheat-harvesting work that it would have taken hundreds of people to do using prior methods.

The British Corn Laws (corn meaning grain in general), in effect from 1815 – 1846, were a protectionist measure slapping big import duties on wheat to protect British growers, even though it hurt the British population and farmers in other countries in the British Empire, including Canada.

The Swiss invented the steam roller mill in the 1800’s.

“His reasons are as two grains of wheat hid in two bushels of chaff: you shall seek all day ere you find them, and when you have them, they are not worth the search.” — Bassanio. The Merchant of Venice. Act I, Scene I. Shakespeare.

“He that will have a cake out of the wheat must needs tarry the grinding.” — Pandarus. Troilus and Cressida. Act I, Scene I. Shakespeare. 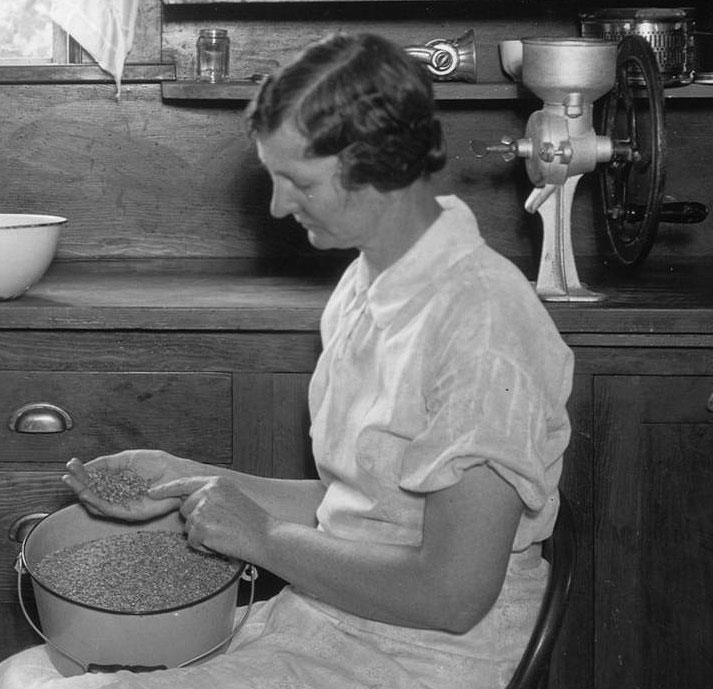