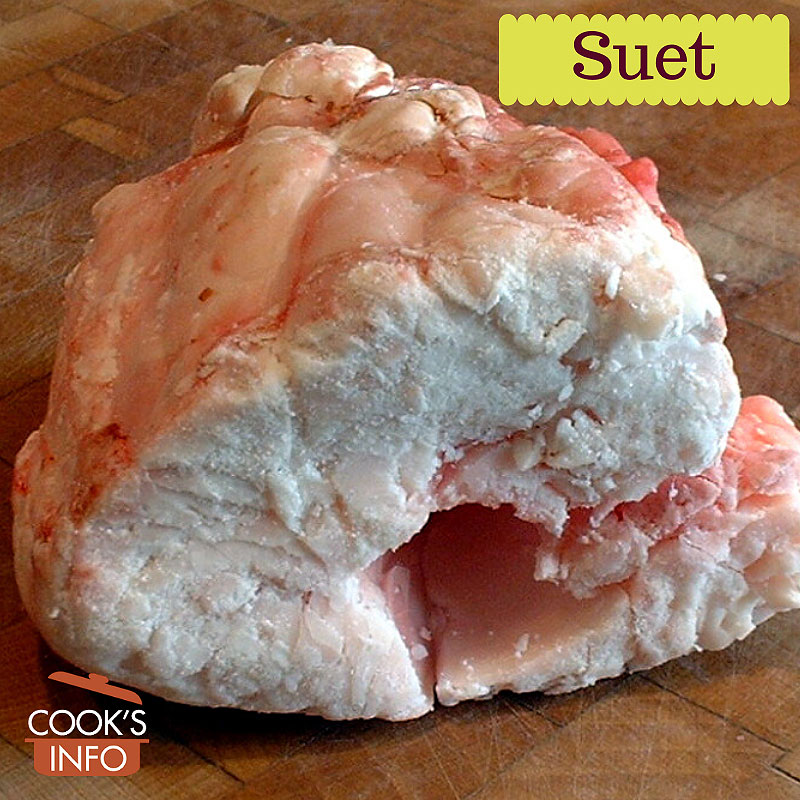 Suet is a raw, solid, white fat which comes from around the kidneys of cows and sheep.

The cows can be fully-grown cows, or calves; the sheep can be lamb, or mutton.

It is used as an ingredient in recipes.

Suet is not the same as tallow, or beef dripping. When melted, and strained (i.e. “rendered”), suet becomes tallow.

Fresh suet will have no overly detectable smell to it. It has a bland, clean taste: it does not taste like beef or mutton.

Suet is very white, and will not impact the colour of the food mixture or dish it is used in.

Even though meat from cows and sheep is kosher, suet from them is oddly not. The reason is that that fat from them was reserved for sacrifices at the temple. Suet from wild animals such as deer, though, is kosher, as they were not sacrificed. [1]NSW Board of Jewish Education. Keeping Kosher. Bondi, NSW, Australia. Accessed January 2020 at https://bje.org.au/course/judaism/kashrut-keeping-kosher/

Suet has the advantage of not starting to go soft at room temperatures, as many other solid fats do. It stays firm. This makes it easier to handle in items such as pastry, where the concern can be that the fat will melt into the dough before the pastry has been put into the oven.

“Suet owes its versatility to its texture: it is the firmest of all the animal fats we use for cooking and possesses the highest melting point. Even at room temperature, suet stays solid and hard. Unrendered leaf lard, if you leave it sitting on your counter for even a little while, will turn greasy and waxy as it softens. Unrendered suet, on the other hand, is so firm that you have plenty of time to roll out and shape the dough without worrying about the fat prematurely melting into the flour.” [2] Wang, Chichi. The Nasty Bits: Suet. Serious Eats. 10 August 2018. Accessed January 2020 at https://www.seriouseats.com/2010/10/the-nasty-bits-baking-with-suet.html

Many savvy cooks prize suet for how it acts during baking. Butter and shortening melt earlier in the cooking process, blending right into batters. Suet, because of its higher melting point, melts much later: after the batter or dough has begun to set. Consequently, when it does melt, it leaves behind small holes and spaces in the batter, making the batter lighter than butter or shortening can. This also gives structure to the pastry, allowing it to stand up better to wet fillings or toppings. Despite the good structure, the pastry will be soft owing to the air holes inside. This is in contrast to shortcrust pastry made with butter or shortening, which will (ideally) be crisp.

“Because it [suet] has a higher melting point than butter, it creates a very different texture in a finished pudding than will butter…. Suet doesn’t melt until the batter has begun to set, so as it melts into its surroundings it leaves tiny holes that make the pudding light.” [3]King Arthur Flour. The King Arthur Flour Baker’s Companion: The All-Purpose Baking Cookbook. The Countryman Press. 2019

Historically, suet was used a great deal in English cuisine until the mid-1900s, when its use became slowly replaced by vegetable and other refined fats.  Now, it is largely used in steamed puddings, crusts such as suet crust pastry and dumplings. Some mincemeat recipes will also call for the addition of suet, for added mouth-feel and richness.

In Scottish cooking it also survives in dishes such as haggis, crappit heids and clootie dumpling.

Dehydrated, shredded suet can be purchased in boxes, typically under the brand name of “Atora.” The dehydrating process makes the suet shelf-stable by reducing water activity. The suet comes in small pellets, which are ready to use in batters and doughs. To stop the suet from clumping, the pellets come lightly mixed with wheat flour. This means that this particular suet is best used in batters and doughs, and is probably less than ideal for a mincemeat filling or other such applications where flour could lump. It could also be unsuitable for anyone with health issues who needs to avoid wheat. 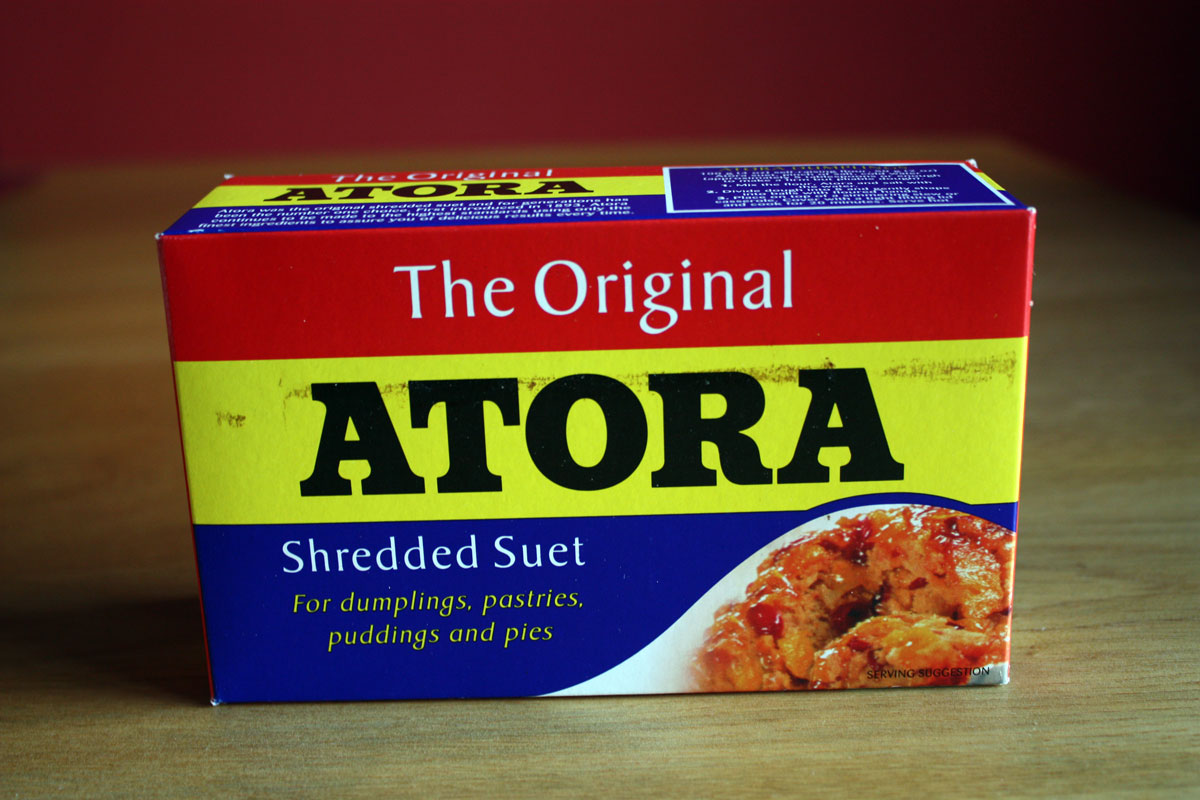 Fresh suet can be more problematic these days to procure, as demand for it has dropped off, but it should come as 100% suet without any flour, etc..

“Rarely available in its natural form, suet is mixed with flour and sold in supermarkets in cream-coloured blocks. A vegetarian suet made from palm oil and rice flour is also available, but it gives slightly different results.” [4]BBC Food. Suet Recipes. Accessed January 2020 at https://www.bbc.co.uk/food/suet

You can try asking a proper butcher to order some in for you. If you get suet straight from a butcher, expect that it may need some cleaning:

“…the butcher was unfazed by my request for real fresh suet, the hard fat from around beef kidneys, and proffered a smooth lump of hard, white fat. At home, I needed to remove a few membranes and red spots (best ask for twice the weight that the recipe requires to allow for this).” [5]Clay, Xanthe. Tried and tested: Celebrity chefs’ Christmas pudding recipes. London: The Telegraph. 20 November 2012.

The cleaning is not onerous, but can seem daunting if you have not allocated prep time for an ingredient you had assumed was ready to use as is:

“The raw, lumpy mass of suet may look intimidating, but it’s actually very easy to work with. Begin by trimming away as much of the pink connective tissue as possible, leaving only the snowy white fat. … Be sure to discard any additional bits of connective tissue embedded in the fat.” [6] Kracklauer, Beth. Suet 101. Saveur Magazine. 16 October 2008. Accessed January 2020 at https://www.saveur.com/article/Techniques/Suet-101/

When buying suet, make sure it is food grade for humans. You can get balls of suet destined for bird feeding but it’s very unlikely that they would be food-grade for humans, or that sellers would risk saying they were.

But health concerns aside, it is also possible you may get sold other forms of fat that won’t behave the same way that suet will:

“Many supermarkets will give you ‘suet’ that really isn’t suet, but fat from other parts of the beast, for feeding birds. Make sure to let your butcher know what you’re using it for so you get the appropriate version.” [7]King Arthur Flour.

In Canada, you can buy bags of frozen, already-shredded suet packaged by companies such as “Maple Leaf” in supermarket chains , particularly around Christmas.

There are a few different brands of boxed, shelf-stable vegetable suet that get imported from England to North America. One of them is Atora.

There is even a “low-fat” version of suet. 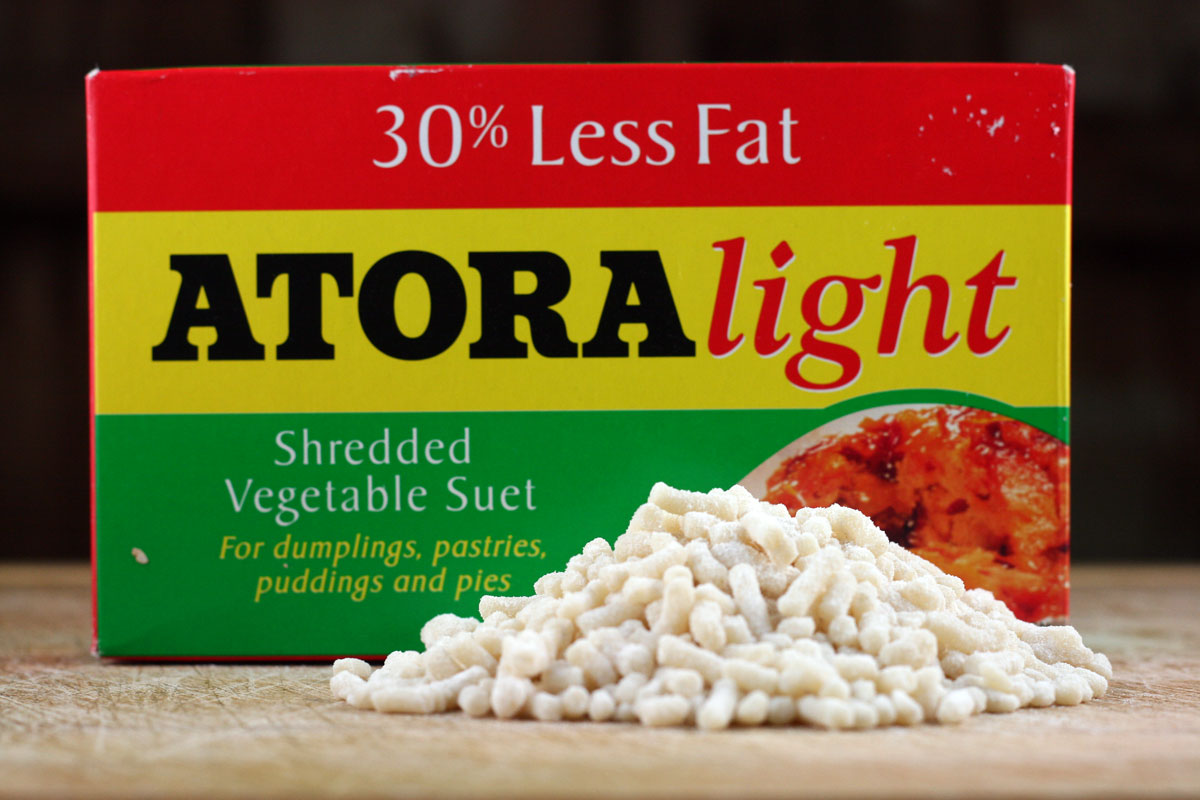 Up until the 1700s, suet was also understood to include kidney fat from deer, as per the Oxford English Dictionary, though it says that usage is now obsolete. Deer, like cows and sheep, are ruminants. The term now, as discussed above, is presumed to refer to cows or sheep.

Hunters today observe that suet from deer can taste different depending on whether the deer feed off grain fields and acorns, or, if it ate scrub, and whether the deer was hung or not, which can allow fat to oxidize and go rancid, contributing to the general perception that venison fat can taste gamey.

Venison can be a dry meat, and consequently when grinding it people often add a fat. Many people recommend against adding deer suet, owing to how unpredictable the flavour can be (as discussed above). Most people seem to agree that beef suet, or pork lard, is the best fat to add to ground venison. A suggested ratio is 1 to 3 or 1 to 4 parts fat to venison: “If desired, add 1 part high-quality pork or beef fat to 3 or 4 parts venison before grinding.” [8]Memmott, Margie. P. et al. Venison. Utah State Cooperative Extension. March 2010. The same or a higher ratio of fat can be used for venison sausage: “For every 3 pounds of game meat add 1 to 2 pounds of pork fat (or beef fat). Do not use game fat trimmings.” [9]Ibid.

Many recipes will call for shredded suet. If added flour as an ingredient is appropriate, you can use the boxed suet, which is already shredded. Otherwise, you do shred it with a grater.

If you are starting with fresh suet, have it very cold before you try to shred it: the colder the better.

“If you try to substitute butter for suet, it will melt before the pudding has a chance to set, which results in something quite heavy and greasy…. If you feel you just can’t use suet, vegetable shortening with its similar melting point is the best substitution. However, it will definitely change the flavor and character of your product.” [10]King Arthur Flour.

Some cooks suggest freezing the shortening first until very firm, then pulsing it in a food processor to create small shreds. Use immediately. [11]”Kevin Bryan said that, although he personally has not tried to substitute anything for suet, he too would suggest replacing the suet with an equal weight of shortening. Before using it, he would freeze it until very firm and then pulse it in a food processor to create nugget-sized pieces and use them in the pudding.”  Akis, Eric. How to replace suet in Christmas pudding. Victoria, British Columbia: The Times Colonialist. 21 October 2012.

Treat beef tallow, chicken fat, or lard the same as shortening above: use well-chilled or frozen till brittle, and pulse into small shreds in a food processor.

Alternatively, you can seek out recipes which call for other fats and already take their melting properties into account.

Treat fresh suet like meat. Refrigerate and use in a few days, or freeze.

Fresh suet freezes well, so don’t hesitate to buy more than you need at present, especially if you’ve had a hard time finding it fresh. And the bonus is that when it’s frozen, it grates very easily when recipes call for you to grate it.

“Suet was highly recommended for frying purposes. In England nothing but suet is used for frying. It is without odor. It is well to use a small amount of cottonseed oil with it. Cocoanut [sic] butter is good but then it is unnecessary to buy any frying material. Mutton suet is preferable to all other suets, but all the fiber must be carefully removed or tallow will be found on the plate on which it is served. In rendering suet keep water away from it.” — Jorgenson, Judith. Around The Evening Lamp. Des Moines, Iowa: Des Moines Daily News. 2 June 1896. Page 2. 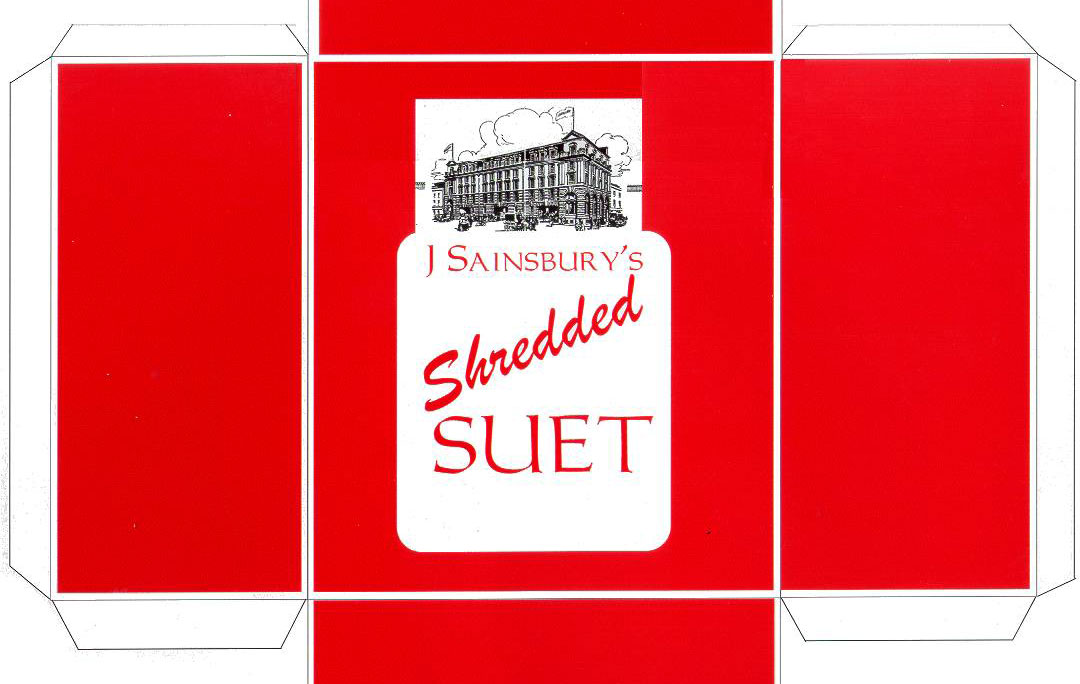 Here are directions for preparing suet for use in Christmas pudding, from 1908:

“Choose firm kidney suet, and if it is at least one week old it will be more easily chopped. Chop it by rubbing it on a suet grater, or shred it finely, using an ordinary knife, then mix it with a rolling-pin. After this, on being rubbed in the hands, it should be as fine as breadcrumbs. (Always use the ¼ lb. of flour in the recipe for this.) Of course if a mincing machine is available the quickest method of preparing suet is to pass it through this, and then roll it in the flour.” — Housekeeping Notes By The Housewife. Belfast, Antrim, Northern Ireland: The Northern Whig. Wednesday, 4 November 1908. Page 7.

This web site generates income from affiliated links and ads at no cost to you to fund continued research · Information on this site is Copyright © 2023· Feel free to cite correctly, but copying whole pages for your website is content theft and will be DCMA'd.
Tagged With: Beef, British Food, suet