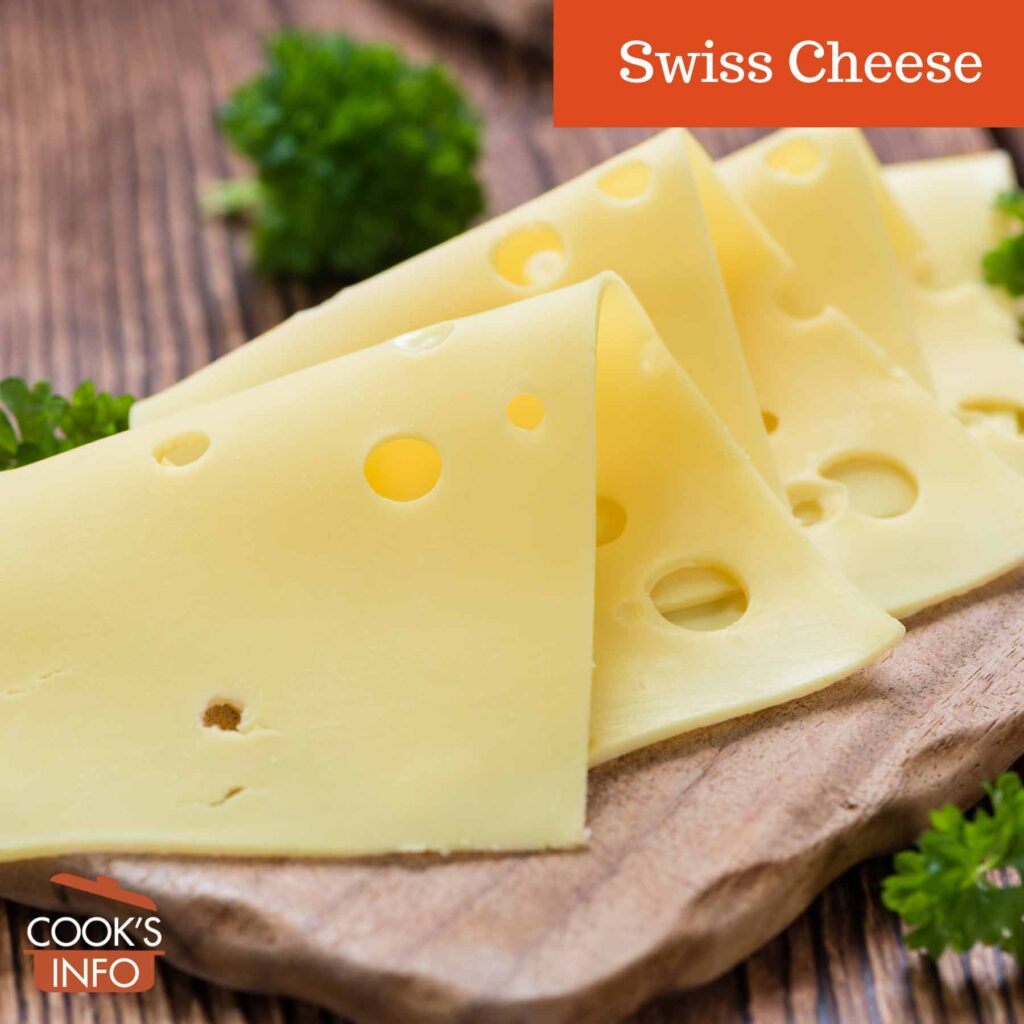 It’s a hard, ivory-coloured cheese made from pasteurized cow’s milk. It has a mildly nutty flavour.

To make Swiss cheese, rennet is used to curdle the milk. The whey is drained off, leaving the curds, which are worked until they are pliable. The curds are pulled into strips and folded over and over to make layers. Then they are pressed and moulded.

As the cheese ages, various kinds of bacteria named “lactococcus cremoris“, “lactobacilli” and “propionibacterium” eat the lactose in the milk and ferment, giving off carbon dioxide. As more and more gas is produced, the cheese stretches to make space for the growing pockets of gas. The bacteria also make up a lot of the flavour in the cheese. If you taste the cheese around the holes, it’s the most “Swiss Cheese” tasting part of the cheese.

The cheese is aged inside plastic wrapping. The plastic allows carbon dioxide to escape, while still keeping the cheese from drying out or developing a rind (therefore no wastage.) A rindless cheese is (1) more cost-efficient to produce, (2) easier for people in retail and restaurants to slice, and (3) means no wastage at home for consumers. Sometimes the plastic on a vacuum packed wheel may appear puffy. This is the cheese continuing to ripen and to produce carbon dioxide.

Though the cheese is aged only about 4 months, and though the plastic wrapping prevents the cheese from ever developing anything more than a very mild taste, the upside is that with the short aging and the reduced wastage, the cheese can be made and sold more affordably so that average families can still include it frequently in their shopping baskets.

You can buy it sliced, shredded or in large pieces.

Swiss cheese does not exist in Europe

In the UK, and in Europe, “Swiss Cheese” has no meaning as a specific cheese. Asking for it would be like asking for “one pound of French cheese” — people would ask you which French cheese? Real Swiss cheeses are named after the region of Switzerland they come from, such as Appenzeller, Emmenthal, Gruyère and Vacherin Mont d’Or.

North American Swiss cheese may have got its start when Swiss immigrants moved to Wisconsin to found the town of New Glarius. They brought their cheesemaking knowledge with them.

The plastic wrapping was instituted in the mid 1900s.

Imported genuine Swiss cheese has always available for those who wanted it, or could afford it, even in remote American regions, if anyone wanted the genuine article. Here is a 1925 ad from Nebraska:

Kambera cheese was an Australian version of Emmenthal or American Swiss cheese. It is now defunct.

This web site generates income from affiliated links and ads at no cost to you to fund continued research · Information on this site is Copyright © 2023· Feel free to cite correctly, but copying whole pages for your website is content theft and will be DCMA'd.
Tagged With: American Cheeses, Swiss Cheeses