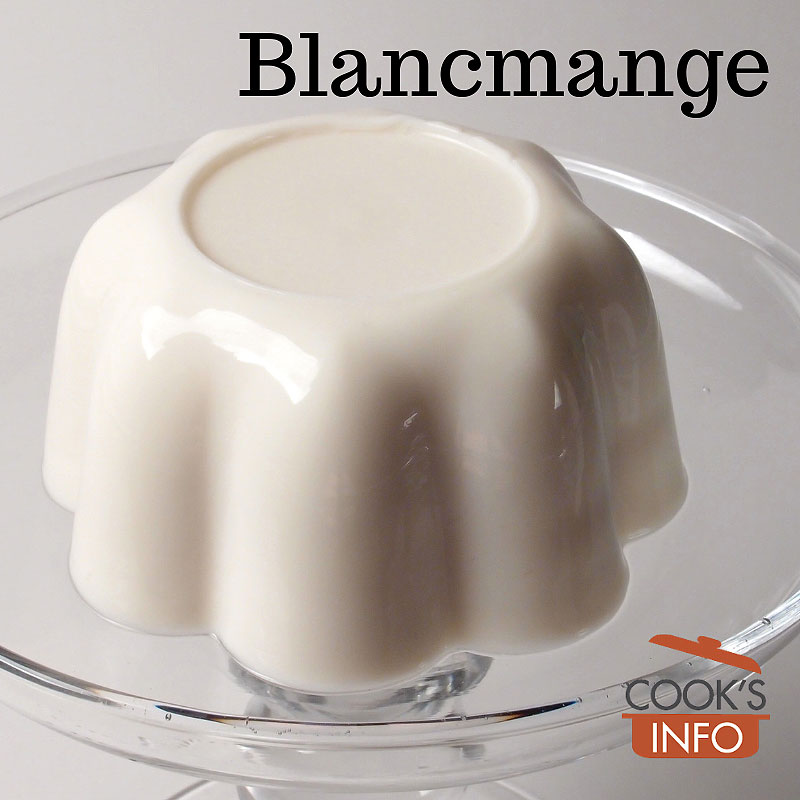 Blancmange (pronounced “bla-monzh”) is a British dessert pudding made from milk thickened with a starch such as cornstarch (aka cornflour in the UK), or a gelatin such as agar (sea moss or isinglass.)

Some people describe blancmange as a form of custard. It is not really a custard, though, because custard is a term best reserved for something with eggs in it (though some versions of blancmange in the 1600s did have eggs), and custards are softer.

Blancmange is closer actually to a stiffer version of those creamy desserts that North Americans call a pudding. It wiggles just like jellies. The more thickener, the stiffer the pudding. Some people say that the texture makes them gag, because it can be slithery.

It is usually sweetened with sugar, flavoured with vanilla and poured hot in a mould where it is allowed to set to have a nice shape, then turned out to serve. It can be garnished with berries, chopped fruits, or sweet sauces. It can also be made in individual serving dishes.

It is often white, but does not have to be white, despite its name. It can come in colours to reflect various flavours such as chocolate, strawberry, etc.

Compare blancmange with junket, which is thickened with rennet.

A popular commercial brand mix (if not the only one still extant), is “Pearce Duff”, made in South Yorkshire. 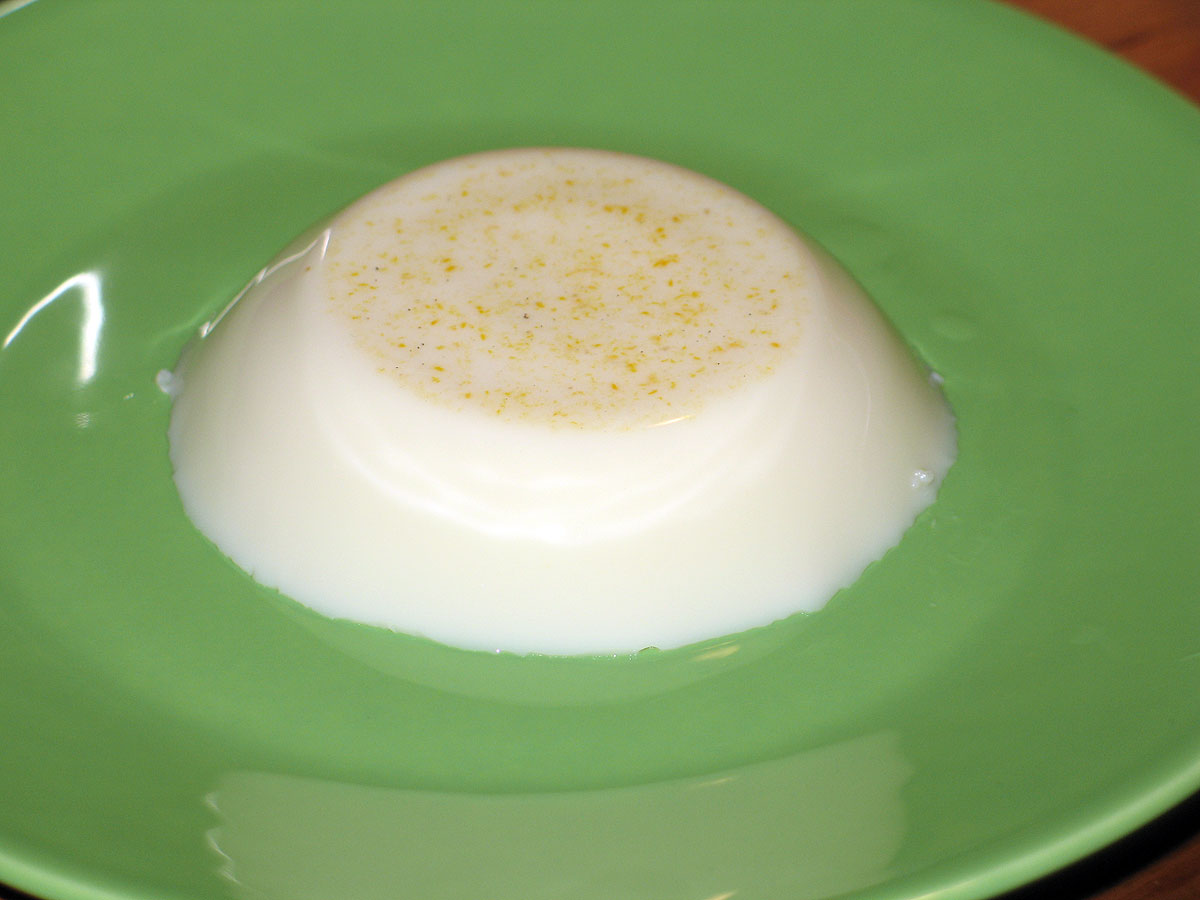 Blancmange is believed to have originated with the Arabs. There are two different Arabic traditions: one uses rice, one uses almond milk. A rice, milk, and chicken breast tradition appears to have come out of Persia; an almond milk one out of Muslim-occupied Sicily and Spain.

Blancmange was being made in France in the 1200s, and was in England by the 1300s. Early European versions of blancmange would use almond milk and or ground almonds, flavoured with rosewater. These early versions included shredded poultry, such as capon or chicken (sic). Veal could also be used if it was light — the idea was that all the ingredients in the dish should be “white.” The fat from the meat and the gelatin provided the set.

Many versions particularly in Italy were made with boiled chicken, almonds and rice.

Platina included a recipe for blancmange in his mid 1400s cookbook. He called for almond milk, ground deboned chicken, bread sauce, ginger and sugar. The mixture was to be strained, simmered, then flavoured with rosewater. After setting, it was sprinkled with pomegranate seeds as a garnish. 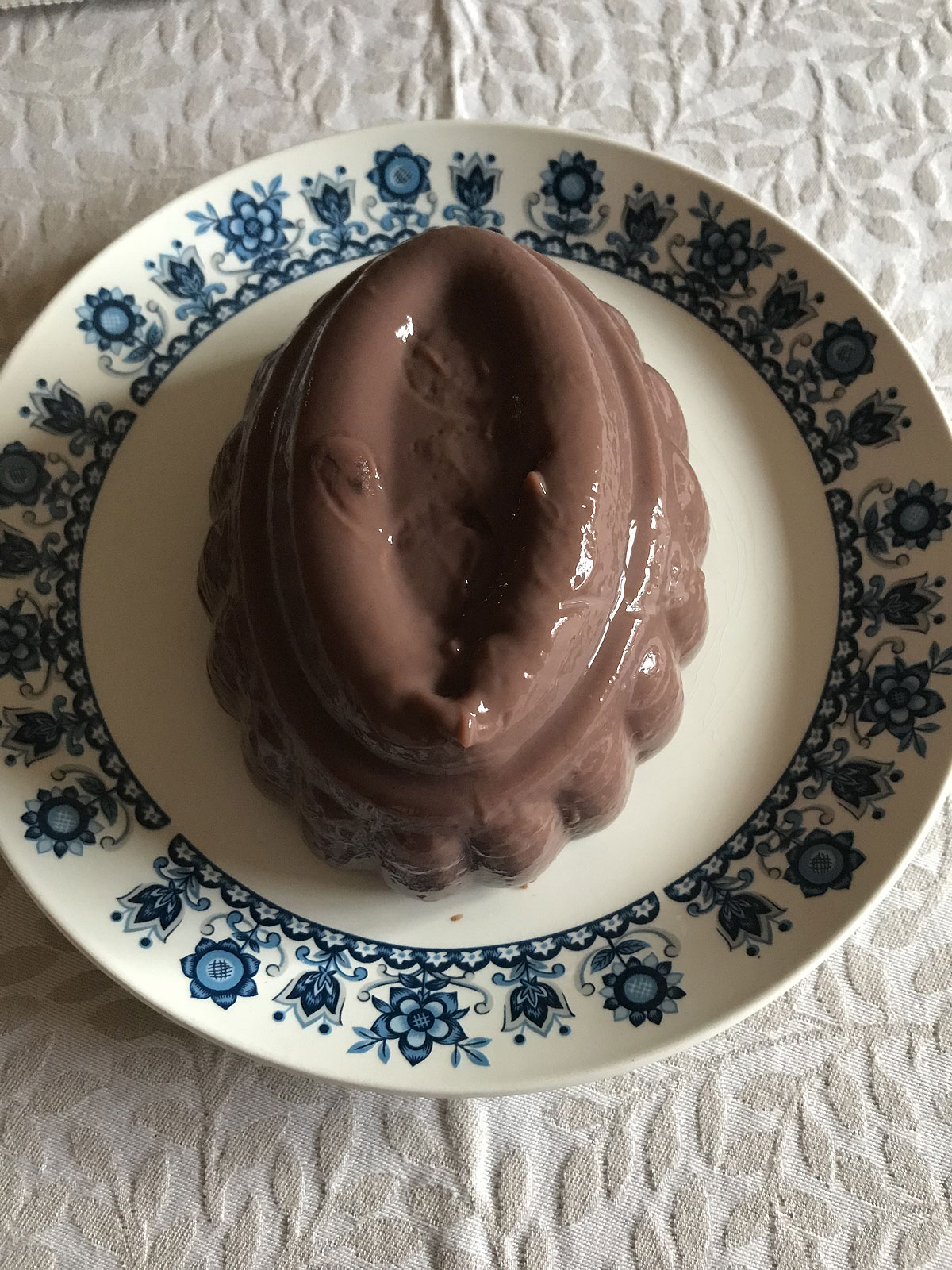 Blancmange was considered invalid food, as well as food good enough for a feast, as it was a lot of work to make.

By the 1500s, meatless versions were being made, and cream and eggs were being used instead of almond milk.

“The exact path by which the isfidbadj of Arabic-Islamic cuisine became the blancmange of medieval Paris, Barcelona, London and Rome has so far eluded historical reconstruction. But the family resemblance between these two versions of “white food” (the literal meaning of both ‘isfidbadj’ and ‘blancmange’) is unmistakable. By any name, the dish was prepared by poaching light-coloured meat (usually chicken breast, also very pale, young, milk-fed lamb in at least one variation) in some kind of light-coloured liquid (water, almond milk or stock), shredding the meat, and combining it with pounded nuts (usually almonds), sugar, and a starchy binder (rice, when available, or soaked bread crumbs); the mixture was cooked over a low fire until the desired thickness was achieved and served with sugar, cinnamon, and rosewater sprinkled on top. Already popular in tenth-century Andalusia, isfidbadj / blancmange arrived in other parts of Europe during the High Middle Ages, where it continued to be an acclaimed delicacy until the middle of the seventeenth century. Thanks to the large amounts of sugar it contained, it was widely regarded as healthy for people of all ages and constitutions.” [1]Pinkard, Susan. A Revolution in Taste. New York: Cambridge University Press. 2009. Page 20.

The thickener in blancmange has changed over the centuries. In the 1600s, it was thickened with jelly made from calves foot or ground deer antlers. In the 1800s, arrowroot was used as a thickening starch.

The Pearce Duff brand has been made since 1847. It comes in three flavours. And, as of 2006, sales are increasing by 7 percent a year.

Another major brand historically was Brown and Polson, which had one-third of the market up until the end of the 1980s, but the company ceased production of its blancmange sometime after that. [2]”Another major puddings market is blancmange, where Brown & Polson (CPC) accounts for one-third of market sales. The same company also dominates a very similar product with a different use: cornflour. Other companies with interests in both products, albeit on a smaller scale, include Pearce Duff (Dalgety), Hazelwood Foods, and Rowntree Mackintosh (Nestlé).” — Mark, John, and Robert Strange. Food Industries: Reviews of United Kingdom Statistical Sources. Volume XXVIII. London: Chapman & Hall. 1993. Page 508. [Ed: “…review is believed to represent the position, broadly speaking, as it obtained in mid-1989, but a few minor revisions have been made to update the main text during the proof-reading stage in mid-1991.”]

Blancmange was the name of a music group form by Neil Arthur and Stephen Luscombe from 1980 to 1986.

Monty Python (Flying Circus, Episode 7) had a skit in which an Angus Podgorny played tennis at Wimbledon with a blancmange as his opponent. Podgorny won because spectators rushed onto the court and ate his opponent.

A COOK they hadde with them for the nones [Ed: occasion],
To boil the chickens and the marrow bones,
And powder merchant tart and galingale.
Well could he know a draught of London ale.
He could roast, and stew, and broil, and fry,
Make mortrewes, and well bake a pie.
But great harm was it, as it thoughte me,
That, on his shin a mormal* [Ed: open running ulcer] hadde he.
For blanc manger, that made he with the best .

Cooks would often prepare food sitting with the cauldron or crock between their legs. Chaucer is definitely seeking to cause revulsion in his readers out here, by causing them to picture an open sore running into a pot of blancmange.

Blancmange directions from the mid 1300s

“If you want to make a blancmange: This is how you should make a blancmange. One should take goat milk and make a half phunt almonds. Pound a quarter phunt rice to meal. And put that into the cold milk. And take a hen’s breast, which one should tease. And chop it into the mixture. And add a clean fat therein. And one should boil it and give it enough (time) and then take it again (off the heat) and take beaten violet, and throw it therein. And a quarter phunt sugar. Add that in and give out. Also, in the fast (days), one may make a blancmange from a pike.” — Ein Buch von guter spise. Recipe 3. Translation by Alia Atlas. Retrieved April 2009 from http://cs-people.bu.edu/akatlas/Buch/buch.html. Original manuscript hails from Würzburg between 1345 and 1354.

For the Blancmange (“manjar blanco”) made in Chile and in Panamá, see the entry on Dulche de Leche. 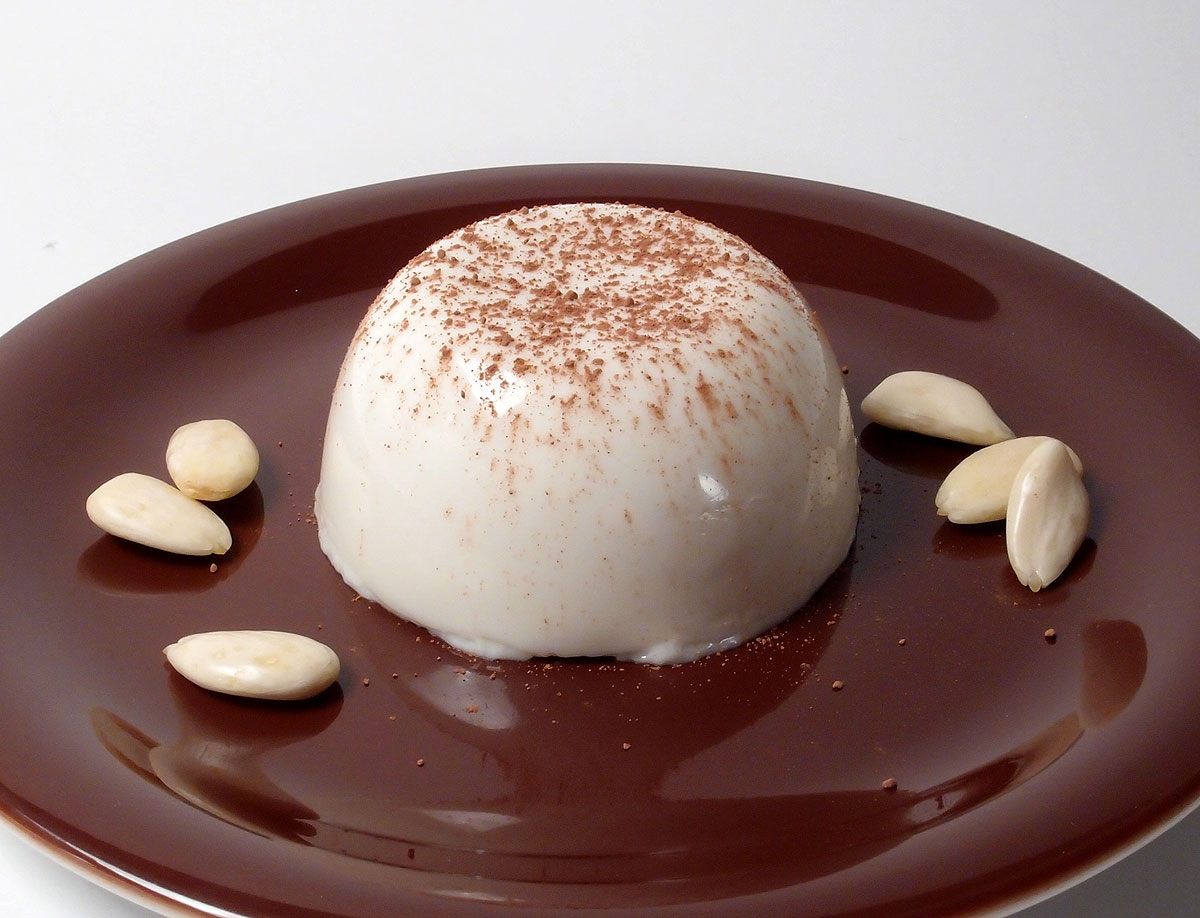 This web site generates income from affiliated links and ads at no cost to you to fund continued research · Information on this site is Copyright © 2022· Feel free to cite correctly, but copying whole pages for your website is content theft and will be DCMA'd.
Tagged With: Platina