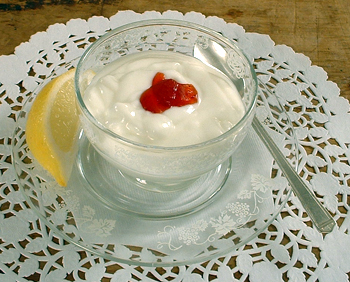 Yoghurt is milk to which a bacteria (“Lactobacillus bulgaricus“) has been added, which thickens the milk, helps to extend its shelf life, and gives it a tangy taste. The bacteria feeds on the lactose sugars in the milk, changing them into lactic acid, which in turn curdles the milk proteins which thickens it into yoghurt.

The active cultures are sold with the bacteria still live in them, for the health benefits to our stomachs. The ones with dead cultures, though of course they are never labelled like that, are heat-treated to destroy the cultures on purpose, which extends the shelf-life of the product.

Sometimes, a tub of whole milk yoghurt may have a thicker, creamier layer on top. To reduce the fat content of the yoghurt, if desired, you can skim this off with a spoon.

The thing to remember about dairy is that the higher the fat content, the more heat you can subject it to. It’s lower fat things — like yoghurt, which at the most will have 4% butterfat, and usually 3.5% — that will curdle, as opposed to say, double cream, which can have 50% butterfat. But some people like the idea of cooking with yoghurt precisely because it is lower fat, and because of the zing it can add to a dish. Here are some tips:

Yoghurt with active cultures can aid digestion, help restore healthy bacteria levels in the stomach (especially important after a period of being on antibiotics) and because the lactose in it has been converted, can usually be eaten by people who have trouble with milk (but don’t count on this: depending on the brand, anywhere from 20% all the way up to 80% of the lactose can remain).

It is a good source of protein, calcium, riboflavin, phosphorus and vitamin B12.

Beyond that, some of the heath benefits touted for yoghurt are:

On some yoghurt tubs, you may see the phrase “contains clockwise rotating lactic acid”. One type of lactic acid rotates clockwise, the other counter-clockwise. The clockwise is more easily digested.

Keep yoghurt refrigerated in a sealed plastic container (all things being equal, the tub it came in.)

You can freeze full-fat yoghurts for use in cooking afterward, but freezing active yoghurts will render your active bacteria quite inactive, as in morto. Defrost slowly, whisk before using as may separate a bit.

The Roman historian, Pliny the elder, may have written about yoghurt: “the barbarous nations… understand how to thicken milk and form therefrom an acrid kind of milk with a pleasant flavour”. [1]The Natural History of Pliny, tr. John Bostock and H.T. Riley, London: Bell, 1856-93, Volume 3, p. 84.

The Turks were making it in the 11th century.

The “Lactobacillus bulgaricus” bacteria was identified by a doctor named Stamen Grigorov (1878–1945) in 1905. The “bulgaricus” part of the name does not mean, as some mistakenly assume, that yoghurt originated in Bulgaria. Instead, it’s a tribute to Grigorov, who was Bulgarian.

Commercial production of yoghurt was begun in Barcelona in 1919 by Isaac Carasso. He named his business after his son Daniel, calling it “Danone” (meaning “little Daniel.”) The name was later Americanized to Dannon.

In America, yoghurt bacteria was being sold by mail order capsules as early as 1907:

“These friendly germs can be purchased by mail in capsules — 50 million in a capsule — four dozen capsules in a box sent to any address on receipt of one dollar. They are sold only under the trade name of YOGHURT. An interesting book describing these friendly germs, known to the trade as YOGURT, will be mailed free upon request by the Yogurt Company, 11 College Hall, Battle Creek, Michigan.” — Advertisement: “Friendly Germs for sale by mail.” New York Times. 24 November 1907. Page 27. Column 7.

Advertising for the capsules as a health treatment picked up in the 1920s:

A 1922 ad promised that yoghurt could help with weight gain:

“Are you underweight? We can build you up with our drugless Fresh building treatment taken in your own home. Our emaciation expert will forward you explicitly instructions for your own individual case. Free literature. Yoghurt Sanitarium. Dept F. So. Bellingham, Washington.” — Advertisement in: Oakland Tribune. Oakland, California. 19 November 1922. Page 85.

In 1929, an Armenian couple named Sarkis and Rose Colombosian, living in Andover, Massachusetts, began selling from their home jars of yoghurt made from an Armenian recipe. They called their dairy “Colombo and Sons Creamery.” [2]Business Wire Magazine. Colombo Yogurt – First U.S. Yogurt Brand – Celebrates 75 Years. 13 May 2004.

By the 1940s, yoghurt had become popular in New York. Clementine Paddleford wrote in 1946, “Twenty years ago the product was introduced as a health food in New York, and slowly but surely it’s catching on here. Now one firm alone is selling 60,000 jars weekly.” [3]Paddleford, Clementine (1898 – 1967). Food Flashes Column. Gourmet Magazine. August 1946. [Ed: the firm she is referring to is Dannon, which had opened a branch in New York in 1942.]

Yoghurt is only now (2004) slowly becoming popular in India.

“One of the important makers was the Dannon Company of Paris which, the year the war started, was turning out around 80,000 5 ½-ounce jars of yogurt a day, both fruited and plain. Daniel Carasso, son of the firm’s founder, transferred the business here in 1942. Now the product so carefully made in a modern laboratory factory in Long Island City has created a Manhattan boom in the consumption of this tart milk custard. Possibly the internationalizing influence of the United Nations personnel has had something to do with the rush of business. When the Assembly was still in session the United Nations Cafeteria sold 300 jars of yogurt a day. United Nations or not, yogurt is selling in unheard-of volume in some 2,000 outlets in the metropolitan New York area with a special route coverage through New Jersey and Westchester. Now plain platinum-blonde yogurt will be seen everywhere with its sister, the daring strawberry blonde.” — Paddleford, Clementine (1898 – 1967). Food Flashes Column. Gourmet Magazine. July 1948.