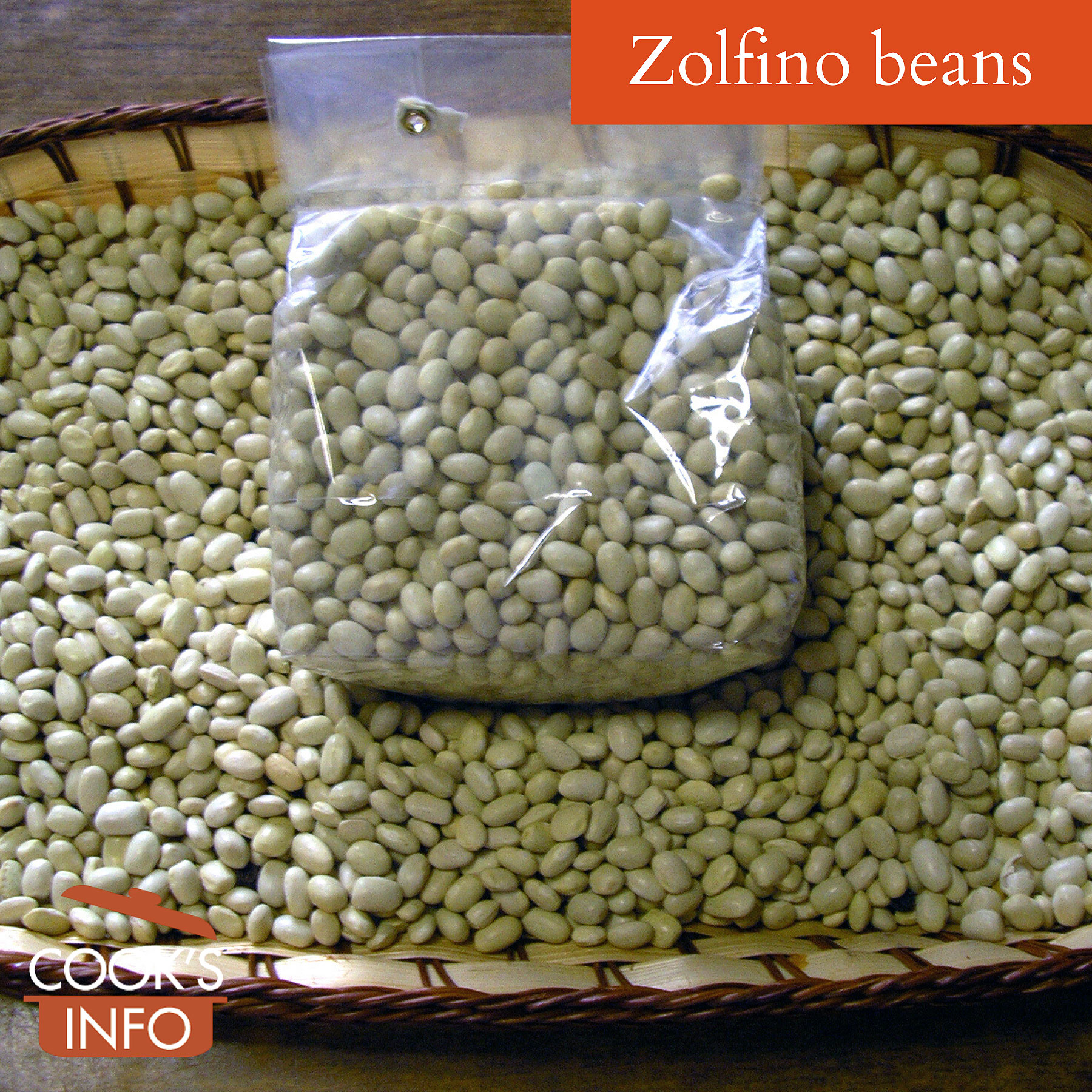 Zolfino beans (aka Zolfini, Zolfino Pratomagno, aka Fagiolo del Cento) are small, round yellow beans with a paler yellow eye. If you see “Pratomagno” as part of the name, it means they were grown in a particular part of Tuscany, Italy.

They have thin skins and a mild flavour.

Despite their thin skin and creamy texture, zolfino beans hold their shape when cooked.

In Italy, they are served with olive oil and toasted bread, and often as a side-garnish for Bistecca alla Fiorentina.

To be legally called Zolfino Pratomagno beans, they can only be grown on the western (Arno) side of the Pratomagno (a mountain chain in Tuscany) in two areas, Florence and Arezzo. In Florence, they can be grown in the commune (municipality) of Regello. In Arezzo, the beans can be grown in the communes of Castelfranco di Sopra, Castiglion Fibocchi, Latrina, Loro Ciuffenna, Piandiscò and Terranuova Bracciolini.

Zolfino Pratomagno beans are sometimes further designated by the village they were grown in.

The plant needs very good drainage, so it prefers to grow on slopes. The whole plant is harvested, then the beans are threshed from the plants in a variety of ways, then sun dried for two days.

As of 2020, there were eleven producers of the bean with the Pratomagno designation. [1]Zolfino Bean. Slow Food Foundation for Biodiversity. Accessed July 2020 at https://www.fondazioneslowfood.com/en/slow-food-presidia/pratomagno-zolfino-bean/ . That number was down from sixteen in 2005.

Simmer zolfino beans for 3 to 4 hours.

Some speculate that zolfino beans were introduced into Tuscany by Giulio de Medici, aka Pope Clemente VII.

Zolfino beans stopped being raised commercially, owing to the low yields the plant gave. It was being grown only in a few home gardens in the 1970s.

They were revived commercially by the Associazione Fagiolo Zolfino del Pratomagno (“Pratomagno Zolfino Bean Association”), headquartered in Loro Ciuffenna, Arezzo. The association has requested PGI status for the bean but as of 2020, the application had not yet been granted.

“Zolfino” refers to the yellow colour being somewhat suggestive of the colour of sulphur (“zolfo” in Italian.)

The “burrino” synonym in Italian (meaning “butter”) comes from how creamy they taste. A synonym “Fagiolo del Cento” (“the bean of the one hundred”) comes from the tradition of planting them on the 100th day of the year, in April.

This web site generates income from affiliated links and ads at no cost to you to fund continued research · Information on this site is Copyright © 2022· Feel free to cite correctly, but copying whole pages for your website is content theft and will be DCMA'd.
Tagged With: Italian Beans, Tuscan Food