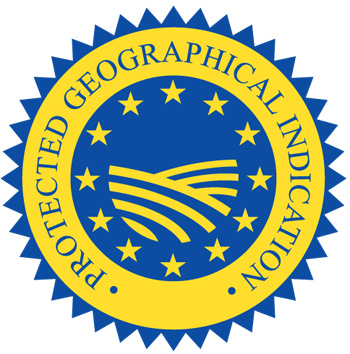 Protected Geographic Indication (PGI) is an EU designation that is very similar to its PDO designation. It was created by the same legislation.

The difference between PGI and PDO is that whereas the PDO standard says the quality or characteristics of a given product are exclusively due to the particular area it is made in, PGI says that its quality or reputation may be attributed to the area, along with human components, but that the actual links to the local region can be somewhat weaker.

The PGI standard allows for part of the process of making a product being done in a certain area, that being the Geographic area in question, while the materials involved (e.g. the milk) may come from another area.

PGI status can backfire sometimes: Newcastle Brown Ale got PGI protection on the basis that being brewed right in the city of Newcastle made it unique and was an essential component of any beer called Newcastle Brown Ale. Now (2004), that the company wants to move the manufacturing out of Newcastle, to the town of Gateshead two miles on the other side of the river, they have changed their mind about how essential it was that the Ale be brewed in Newcastle, and are scrambling to get the EU to revoke the PGI. If the EU doesn’t, the company will either have to forget about moving, or it will lose the right to use the word Newcastle in the name of its Brown Ale anymore.

There used to be two levels of wine, DOC and vino da tavola (table wine), aka VDT.

By the 1970s, some of the VDT makers began upgrading their products. The products still weren’t DOC-level quality, but they were still better than other VDT’s. By the 1980s, some of these had actually become quite good, and they really needed their own level of designation. Consequently, the PGI level was invented.

The odd thing was that at the time, Cabernet Sauvignon was the dominant grape on the world market and the one that everyone wanted their wines made from. Italian wine makers couldn’t give Sangiovese or other Italian wines away. So Italian winemakers were allowed to get PGI status for making wines from French grapes that they grew, hardly typical at all of the grapes or wine historically made in that area. So, PGI for wine ended up as a designation no better or worse than DOC; it has both upper and lower end wines in it, with the designation just certifying that the grapes were grown in the region where the wine was made.

This web site generates income from affiliated links and ads at no cost to you to fund continued research · Information on this site is Copyright © 2023· Feel free to cite correctly, but copying whole pages for your website is content theft and will be DCMA'd.
Tagged With: Protected Geographic Indication