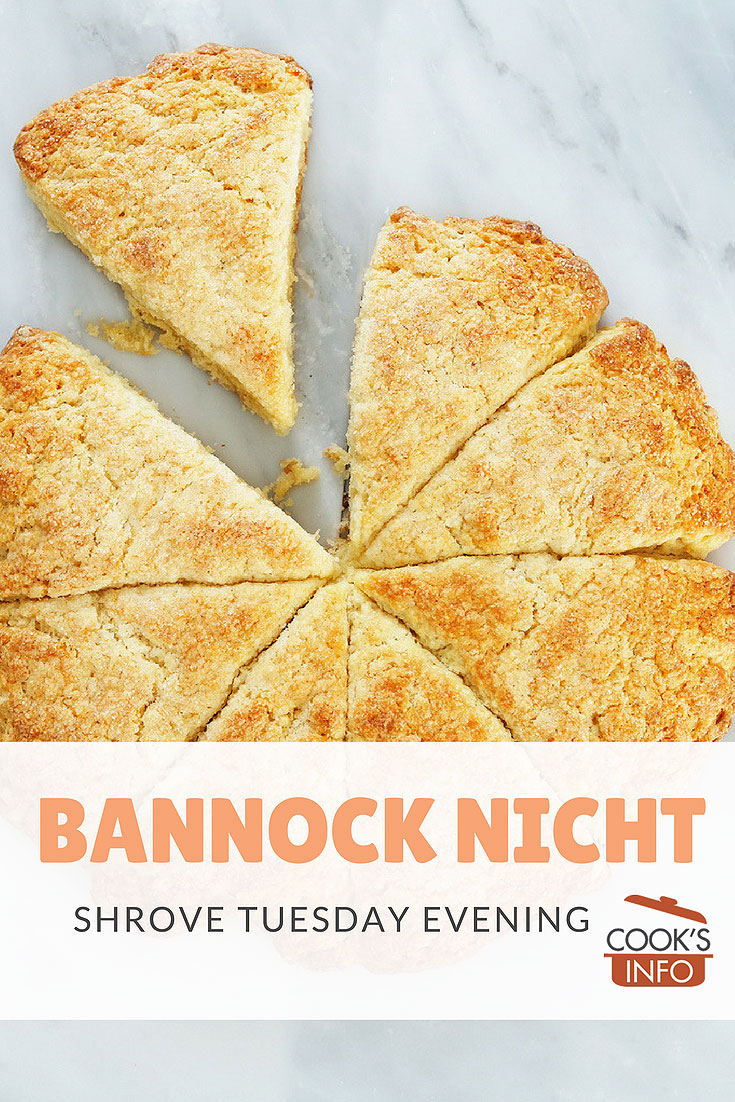 Bannock Nicht (“Bannock Night”) is a festival that was held in Scotland on the same day as Shrove Tuesday.

Earlier in the day, the day was called Faster Even or Brose (Broth) Day.

There was usually a soup based on beef broth. (It was considered that having beef on this day would ensure that your cattle would prosper.)

In the soup pot would be placed a ring and a button; a button signified a single life, the ring signified marriage. If you got the ring, you didn’t say anything till everyone had finished eating. You’d wear the ring overnight, then give it back to whomever it actually belonged to, and tell people the dreams you’d had overnight. Sometimes, groups of young people would go from house to house with their own spoon to have the broth at many different houses.

The night got its bannock name from a tradition around bannocks in the evening. Each person present would choose an egg. The person with the best “fortune telling” skills would separate the egg, putting the white into a cup of water, then she or he would tell fortunes based on the shapes the white took. If it spread out like a sheet, that indicated death. Then all the egg yolks and whites were gathered up, and used along with oatmeal (and / or flour) and milk to make bannock, baking them on the girdle (sic). Everyone would have to take part in making, cooking and eating them.

At the very end of the evening, a final large bannock would be made called a “sautie bannock” into which was mixed a ring. The person who was responsible for actually baking this large bannock had to remain completely silent, while everyone else tried to get them to say something. If they broke down, someone else would take their place. The cake was then divided up amongst the single people of marriageable age and whoever got the ring, would be the first among them to be married.

The men might also play some kind of ball game.

“We walked up in the morning in little groups saying to ourselves, ‘Eh! an’ this is brose day and bannock nicht,’ and when we had all assembled in the schoolroom, boys and girls, young men and maidens (for it was winter time, and big scholars were there, both male and female), we still solemnly, though cheerily, announced to each other that this was ‘brose day an’ bannock nicht.’

The brose I can scarcely describe; the bannocks were simply huge, thick, gritty pancakes….brose consisted, I think, of oatmeal, butter, salt, pepper, and ‘kail’, or cabbage ‘bree.” It was made in a great big earthenware trencher, and a number of buttons, threepenny pieces, sixpences and cheap brass and silver rings were inserted in it. Huge excitement prevailed while the brose was being eaten, as to who would prove the lucky persons obtaining the silver ring or the silver pieces. It was bad luck and void of honour to draw only a black button or cheap brass ring; and it was not at all unusual for the guests who found these articles to quietly swallow them (at any rate, the smaller buttons), and never say a world. I can vouch for this, for I myself swallowed more than one, and never felt a bit the worse. We scholars had the entrée to the various farmhouses, and access to all the brose bickers, and we made ample use of our privileges.

Bannocks were not tasted until about eight o’clock in the evening, but then a wild saturnalia set in. At home and in neighbours’ houses, we ate bannocks not merely to repletion, but far beyond the bounds of satiety. It is true that we tried to reduce our load by walking or running from house to house. The younger folks were strict teetotalers, but the elder ones washed the bannocks down with much usquebaugh. ‘I hae eaten forty bannocks an’ drunk twa bottles, an’ I hae had a guid an’ a quiet day,’ said Old McQueben, prince of peat-diggers, to me. There was plenty of fiddling and dancing on bannock night. Sandie Peterson the saw-miller’s barn was always thrown open, and a big company assembled…The standing rule was to have ‘twa dances an’ than a bannock.” [1]Gordon, Alexander. The Folks O’ Carglen: Or, Life in the North. London: T. Fisher Unwin. 1891. Page 274 – 278.

“In these days brose-day — what day youth supped its fate from the brose-bowl — was one of the festal customs highly honoured in Braefoot.” [2]James Mackinnon. Braefoot Sketches. 1897.

This web site generates income from affiliated links and ads at no cost to you to fund continued research · Information on this site is Copyright © 2023· Feel free to cite correctly, but copying whole pages for your website is content theft and will be DCMA'd.
Tagged With: Ash Wednesday, Bannock, Scottish Food