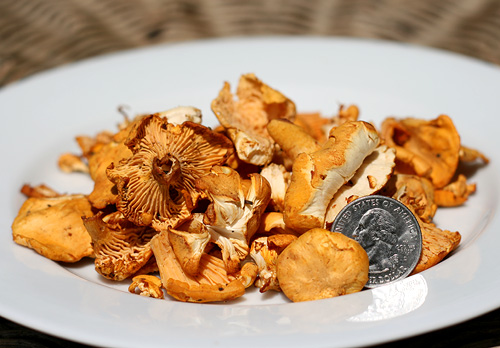 There are many different varieties of chanterelle mushrooms. Though the most common variety is just called a “chanterelle” or “common chanterelle”, the rest are distinguished by various adjectives stuck on.

Chanterelle mushrooms are shaped like the ends of trumpets, only with scalloped edges. The colour can be white, yellow, orange, apricot, golden-brown or black. The caps can be 5 to 7.5 cm wide (2 to 3 inches.)

They are very fragrant, with a firm texture, which means that they can be tossed around in cooking and won’t crumble apart.

North American varieties are larger than Asian or European ones.

So far (2004), no one has succeeded at cultivating chanterelles; they are collected from the wild and sold on to stores.

Even though you’re always told never to soak mushrooms in water, it doesn’t hurt to swish chanterelles briefly around in cold water as dirt tends to stick in their gills.

Don’t overcook or they go tough.

This web site generates income from affiliated links and ads at no cost to you to fund continued research · Information on this site is Copyright © 2022· Feel free to cite correctly, but copying whole pages for your website is content theft and will be DCMA'd.
Tagged With: Chanterelle Mushrooms, Wild Mushrooms