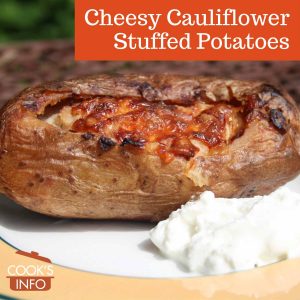 Large, filling, stuffed baked potatoes with a warm cheesy flavour, satisfying crisp potato skins and creamy insides. These just melt in your mouth and people will talk about them for a long time to come. Like all stuffed potatoes, they are a bit of futzing -- so perhaps reserve for special occasions, and make a day ahead. But, each large stuffed potato is just 4 Weight Watchers PointsPlus® per potato. So you enjoy your potato worry free! For a higher-fat version (14 Weight Watchers PointsPlus® per potato), see our Pommes de Terre Farci Recipe
Print Recipe Pin Recipe
Prep Time 1 hr 30 mins
Cook Time 2 hrs
Total Time 3 hrs 30 mins
Cooking Temperature 175 C / 350 F / Gas Mark 4
Course Potatoes, Skinny Food

Allow a good amount of prep time for this recipe. But people's delighted reactions when they take their first bite make it worth while. Get good, large baking potatoes -- the larger they are, the easier they are to handle. Instead of boiling the cauliflower, you can do it in a pressure cooker for 7 minutes. Instead of the onion powder, you can use a few tablespoons of minced onion. Instead of the garlic powder, you can use a teaspoon or so, to taste, of minced garlic. If you do opt for either fresh onion or fresh garlic, zap them in the microwave first for a minute or so to soften and cook them before adding to potato mixture. You don't have to do the added bits about the top slices; you can just discard them if you wish. But they are yummy. Easily doubled or tripled.
Tried this recipe?Let us know how it was!

We used a head of cauliflower that was 1 kg (2.2 pounds) after being prepped and ready for cooking.