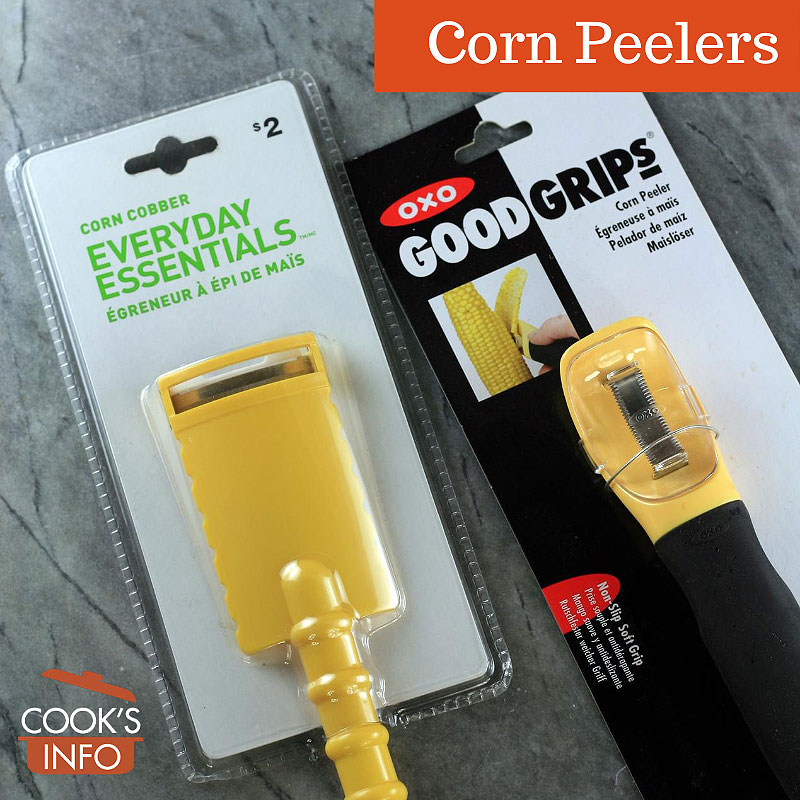 A corn peeler is an implement used to quickly and easily strip kernels off a raw or cooked cob of corn.

It is used for preparing corn off the cob, for use in salads, dishes, stews, or for canning, drying or freezing. It can also help make fresh corn more accessible to those with braces, or sensitive teeth.

It is definitely a single-task tool. Many people try to avoid such tools these days, but if you preserve corn in any great quantities, you may find that it earns its storage space several times over.

Other names for these devices include corn cobber, corn cutter, corn scraper, corn stripper and kernel cutter. (Note though that searching on “corn scraper” may yield you unintended results.)

To be clear, corn peelers do not peel the husk and the silk off a cob of corn; those you have to do yourself manually before using the corn peeler. The corn peeler is designed just for removal of the corn kernels.

Some corn peelers say they are good for both left- and right-handed people. You will often have the option of whether to push or pull the peeler along the cob while doing your scraping.

Many, but not all, come with covers to cover the blade during storage for added safety in drawers.

Check to see if the model you are looking at is dishwasher safe, if that matters to you.

An issue with using them is learning how much pressure to apply. If you press too lightly and therefore cut too shallow, you can leave too much of the corn kernel behind, resulting in food waste. If you cut too deeply, you can scrape bits of the cob off with the corn kernels.

Fresh corn scraped off a cob off corn can be enjoyed in two ways: either as whole kernels, or as creamed corn. If you are preparing creamed corn, your recipe will typically give you directions about how exactly you need to scrape the cob.

Another issue users often point out is that corn kernels can often spray everywhere, causing both food waste and a mess to be cleaned up.

There is an infinite variety of choices of corn peelers for the home market now, but basically they all fall roughly into three categories:

Note as well there are also large industrial electric ones for commercial operations.

These peelers tend to be small ones that can easily be slipped into a drawer with other implements. Many will have covers for the blades to protect fingers reaching in the drawer for other things.

Other features may include stainless-steel blades and non-slip handles. The blade may be curved in some fashion to go around the cob better. Typically, the blades on these can’t be sharpened. When the blade goes dull, the implement has to be discarded and a new one purchased.

To use, apply firm, even pressure along one side of the cob. Rotate the cob a bit and do the next exposed edge. Continue rotating and scraping until the cob has been cleaned of kernels.

The idea with cylindrical corn peelers is that you can scrape all the kernels off all sides of the cob, all at once, in one fell sweep.

Some are fixed width, others are adjustable width.

Both Serious Eats and Cooks Illustrated reviewers pointed out that models they tested broke during testing. (See “Sources” below.)

This style is more like a mandoline than a peeler, though it is a single purpose mandoline.

This corn peeler consists of a long, narrow wooden board with a blade set in half-way down it. There is actually a name for it: the “Lee Wooden Corn Cutter”. It was invented by a J.B. Lee in 1939 in Texas. [1]Lee Valley Tools. Accessed August 2020 at https://www.leevalley.com/en-ca/shop/kitchen/kitchen-tools/slicers-and-mandolines/71507-stainless-steel-corn-cutter-and-creamer?item=09A0446

There are two modes of usage, one for whole corn kernels, the other for cream corn.

It requires a screwdriver to adjust the blade height and placement, and you have to attach a separate scraper for cream corn. A Serious Eats magazine reviewer found this fiddly: “And so ensued many raisings and lowerings of the blade, followed by failed attempt after failed attempt to run an uncooked ear of corn along the groove”. [2]Achitoff-Gray, Niki. Take It All Off: Are Corn Strippers Worth It? Serious Eats. August 2019. Accessed August 2020 at https://www.seriouseats.com/2019/08/are-corn-strippers-worth-it.html Cooks Illustrated did not like it, either, and felt as well that hand protection was needed: “This mandoline-like corn cutter felt dangerous to use (we needed to protect our hand with a cut-resistant glove), and could only remove a couple of rows of kernels before the cob became jammed in the dull blade.” [3]Corn strippers. Cooks Illustrated. July 2009. Accessed August 2020 at https://www.cooksillustrated.com/equipment_reviews/1175-corn-strippers

It can also be very fiddly to clean, so you may not want to haul it out for small jobs.

There is also now a version of this where the board is stainless steel instead of wood. It is unclear if the steel version requires the same type of screwdriver adjustments.

Before scraping raw corn, husk the corn, remove silk, and wash the cobs. This will help reduce any bacterial load on them that may have come in from the field. Then with the tip of a paring knife or utility knife, quickly dig out and discard any discoloured kernels.

Invert a small bowl into a larger bowl, rest the cob on the smaller bowl, and use a knife. [4]Achitoff-Gray, Niki. Take It All Off: Are Corn Strippers Worth It

Or, take a Bundt® or tube cake pan, put it bowl side up, put the cob in the hole, and use a knife. The pan will catch the kernels.

Achitoff-Gray, Niki. Take It All Off: Are Corn Strippers Worth It? Serious Eats. August 2019. Accessed August 2020 at https://www.seriouseats.com/2019/08/are-corn-strippers-worth-it.html

This web site generates income from affiliated links and ads at no cost to you to fund continued research · Information on this site is Copyright © 2022· Feel free to cite correctly, but copying whole pages for your website is content theft and will be DCMA'd.
Tagged With: Peelers