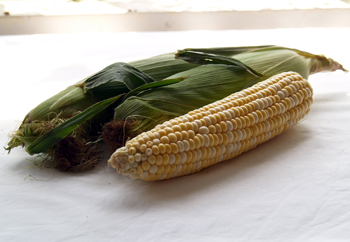 Corn on the cob
© Denzil Green

Corn is a member of the grass family. It is a food that we sometimes use as a grain, and sometimes as a vegetable.

Corn that has blue, brown, orange, purple or red kernels is treated as a grain.

This is the type of corn that we treat as a vegetable and eat fresh, with yellow or white kernels. It has been bred to have more sugar than it does starch. Sweetcorn is 5 to 10% sugar. Supersweet corn is up to 30% sugar. There is also now a blue novelty variety of sweetcorn.

Brits are unique in Europe, in that they share the passion for sweetcorn with North Americans. Out-of-season corn on the cob sold in the UK often comes from Israel.

Canned Sweetcorn that is available out of season in North America usually comes from Mexico.

This is not a special variety of Sweetcorn, but rather corn cobs harvested very young from certain cultivars of corn selected to be able to grow and produce these cobs within a month. They are grown in China, Central America and in some parts of South-East Asia, and used a great deal in Asian cooking. You can’t really get the Baby Corn fresh outside those growing areas. Elsewhere, it is available canned, jarred, pickled or frozen.

The accepted “truism” — that you had to pick a cob of corn and race it to a pot of water for cooking — was based on the fact that corn would start to convert its sugar into bland starch the moment it was picked, and therefore get less sweet. This truism was presumably meant to convey the sense of “the fresher the better”, but then what vegetable isn’t? It never really seemed all that helpful a suggestion, given that only a handful of people have corn growing in their back yard. In any event, this is less and less an issue with corn, as breeds are being grown now that hold onto their sugar for much longer, meaning that consumers have a better chance of a tastier cob on their plates.

Husking a cob of corn means removing both the husks (that look like leaves), and the silk. Pull the husks down and off, then snap off the stem of the cob. Remove the silk. Removing the silk is the most fiddly part; get off what you can by hand, then brush the rest off with a dry brush. If there are any bruised kernels, cut them out with a paring knife. Then rinse under cold water.

Cobs of corn are usually served with butter, but are also good served in a Mexican way, which is rubbed with pieces of lime and then salted.

Have the corn husked and ready to go.

Choose a pot large enough to hold enough water to completely cover the corn. Put in that amount of water, and bring it to a boil.

NEVER salt the water when cooking corn, as it will toughen the corn. You may, if you suspect that your corn is less than sweet, add sugar to the water, about 1 tsp per quart (litre.)

When the water is at a vigorous boil, put the corn in (slide it in, so that it doesn’t plop in and splash hot water all over the place.) The water will stop boiling, being cooled a bit by the temperature of the corn. When the water starts to boil again, or after about 3 to 4 minutes, the corn is cooked. Remove.

To keep cooked corn warm, just store it in a covered pot of hot but not boiling or even simmering water. Some people like to use a styrofoam picnic cooler filled with hot water for the purpose, if the quantities of cooked corn justify. 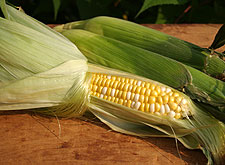 Corn on the cob
– © Denzil Green

This also applies to baking it.

You need cobs of corn with their husks on.

Peel off any loose bits of husk that might burn. With scissors, cut off any silk hanging out of the top. Toss on barbeque grill over low heat for about half an hour, turning often. To eat, pull back the husk on all sides to form a handle at the end. The corn silk will be very easy to remove as it will be all dried now, and will just brush away.

There are methods that involve greater futzing (soaking in water first, etc), but the end results will be the same as this.

Kernels: Husk and wash. Scrape kernels off. Boil kernels for 4 minutes. Plunge in cold water, drain, package, and freeze.
Corn on the cob: Husk. Boil small cobs for 7 minutes, medium-sized cobs for 9 minutes, large-sized cobs for 11 minutes. Plunge in cold water, let cool completely (otherwise if frozen partly warm, the kernels may take on the taste of the cob), drain, package, and freeze.

Corn’s protein is deficient in lysine, an important amino acid, and while it is rich in niacin, 50 to 80% of that niacin is bound up and unavailable to our body for processing. If you ate a diet of primarily untreated corn, you would develop pellagra, a skin disease accompanied by mental degradation.

Ancient cultures in Central and South America never developed pellagra because of the way they processed corn. They soaked corn in a 5% lime (the mineral, not the fruit) solution before drying the corn and grinding it to make flour. This flour is called Masa Harina, and it is this distinctive flour you taste in taco shells and tortilla chips. This processing not only lends a pleasant flavour: it makes the lysine amino acid and the niacin available to the human body. They also ate corn frequently in combination with legumes, which are rich in niacin and whose proteins complement those of the corn making a full protein.

Good source of Vitamin A.

Store fresh cobs in corn in fridge in a plastic bag for up to 2 days.

To freeze corn on the cob, pull the husks down, remove the silk, pull the husks back up and tie them on with a strip of husk, string or twist tie. Then bag and freeze. You can cook these from frozen if you will be boiling or microwaving them.

Corn is a new world food, probably native to Central America. Some speculate that it evolved from Teosinte, a grassy weed still found in Central and South America.

There isn’t really any such thing as wild corn; the corn that we grow came about through selective breeding by man over the millennia. With the years, the kernels got bigger along with their cobs. It’s only since the 1800s that Europeans have bred yellow or white corn.

Corn was brought to Spain by Spanish explorers. From Spain, it was spread around the Mediterranean, and to other Spanish colonies. The Portuguese brought it to Africa.

For quite a while, Northern Europeans just used it all for animal feed. The corn that was grown was flour, dent or Indian Corn up until the second half of the 1700s. The first Sweetcorn was discovered growing in 1779 in an Iroquois village in central New York State. (Though it has now been realized that in Peru, natives there had been growing some varieties of Sweetcorn well before the Europeans arrived.) Sweetcorn didn’t start to catch on as a fresh vegetable until the 1840s, but by the 1870s people were already working to breed it even sweeter and to make it yellow — the corn the Iroquois were growing was actually blue.

By the 1950s, very sweet varieties had been developed with a double-sugar gene, that will stay sweet after picking (some people now think these are too sweet.)

Corn in English used to mean any grain. In the King James Bible, you’ll see “corn” mentioned throughout it, but with corn as we know it being a New World food, it’s obviously not corn on the cob that was meant.

Brits still get confused and think that the speaker or writer might be meaning wheat. If they mean “eating corn”, they’ll call it Sweetcorn. If they mean any kind of “corn” corn, they will call it “maize”. To North Americans, fresh-eating corn is the standard, what they think of when they say and hear corn, so it’s never qualified as “Sweetcorn” and they even get confused when they hear that word. They do the opposite of Brits, and only qualify the word when it’s not eating corn, such as for instance “cattle corn” (aka “field corn”), which is grown as feed for animals.

For a while, colonists in the New World called it “Indian Corn.”

Maize comes from a native word, “mahis”, meaning “source of life”. Mahis is what natives, probably on an island in the Caribbean, told Columbus it was called . It became “maíz” in Spanish. North American natives never used the word “maize”, they had their own words for corn.

Corn cobs are “olotes” in Mexico.

This web site generates income from affiliated links and ads at no cost to you to fund continued research · Information on this site is Copyright © 2021· Feel free to cite correctly, but copying whole pages for your website is content theft and will be DCMA'd.
Tagged With: American Food, Corn, Grains