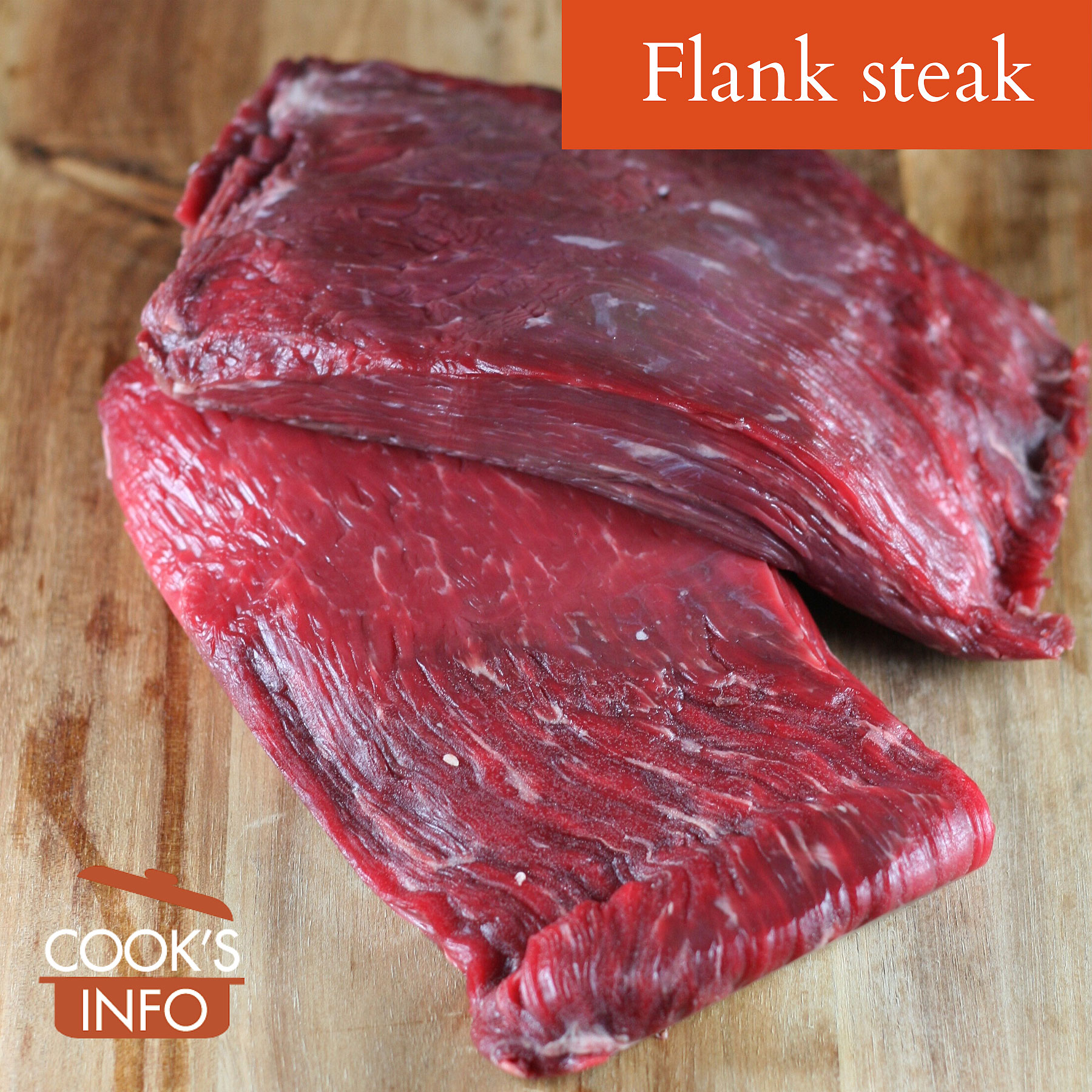 Flank steak is a long, flat, thin, boneless and lean cut of steak, whose grain runs lengthwise. There are two flank steaks per cow, one on each side.

It was used so much in America to make London broil that many people will still call this steak London broil (in fact, though, London broil is actually a technique, and can really be done with any cut of beef.)

“In recent years flank, which was formerly used almost entirely for braising and stewing, has become a choice cut for grilling. It is also known as London broil, a standard luncheon dish in restaurants throughout the country. Although other cuts are sometimes substituted for London broil, including hip and tenderized chuck, the use of flank steak continues to grow. Since there are only two flanks to each steer, these steaks have become hard to find and increasingly expensive. Flank steak is broiled either plain or after being marinated in a teriyaki or barbecue marinade. It cooks quickly, taking 5 to 7 minutes to reach the rare state, and then must be carved on a sharp diagonal in very thin slices. If treated with teriyaki marinade, flank steak goes well with rice and stir-fried vegetables. It is equally at home with any of the crisper forms of fried potatoes, with good fresh salads, and with fried onions or sautéed mushrooms. Flank is an ideal cut of beef to use for outdoor parties. Several steaks can be marinated at a time and cooked so quickly that no one has to wait for food. Uncooked leftover steaks can be kept in the marinade and refrigerated for as much as 4 to 5 days for later use.” [1]Beard, James. American Cookery. Boston, MA: Little, Brown and Company. 1972. Page 261.

With the popularity of Mexican style dishes such as fajitas outstripping the supply for skirt steak, and flank steak stepping in as a substitute, other cuts such as some from the round are more popular now for London broil.

Score in criss-crosses, and marinate anywhere up to 4 hours for flavour, then grill, broil or barbeque quickly to rare, and cut diagonally across the grain into thin strips to serve.

Don’t cook much past medium-rare, as it is very lean and will dry out.

Alternatively, you may braise it.

‘Physically [James Beard] was the connoisseur’s connoisseur. He was a giant panda, Santa Claus and the Jolly Green Giant rolled into one. On him, a lean and slender physique would have looked like very bad casting.’ — Craig Claiborne (American food writer. 4 September 1920 – 22 January 2000)