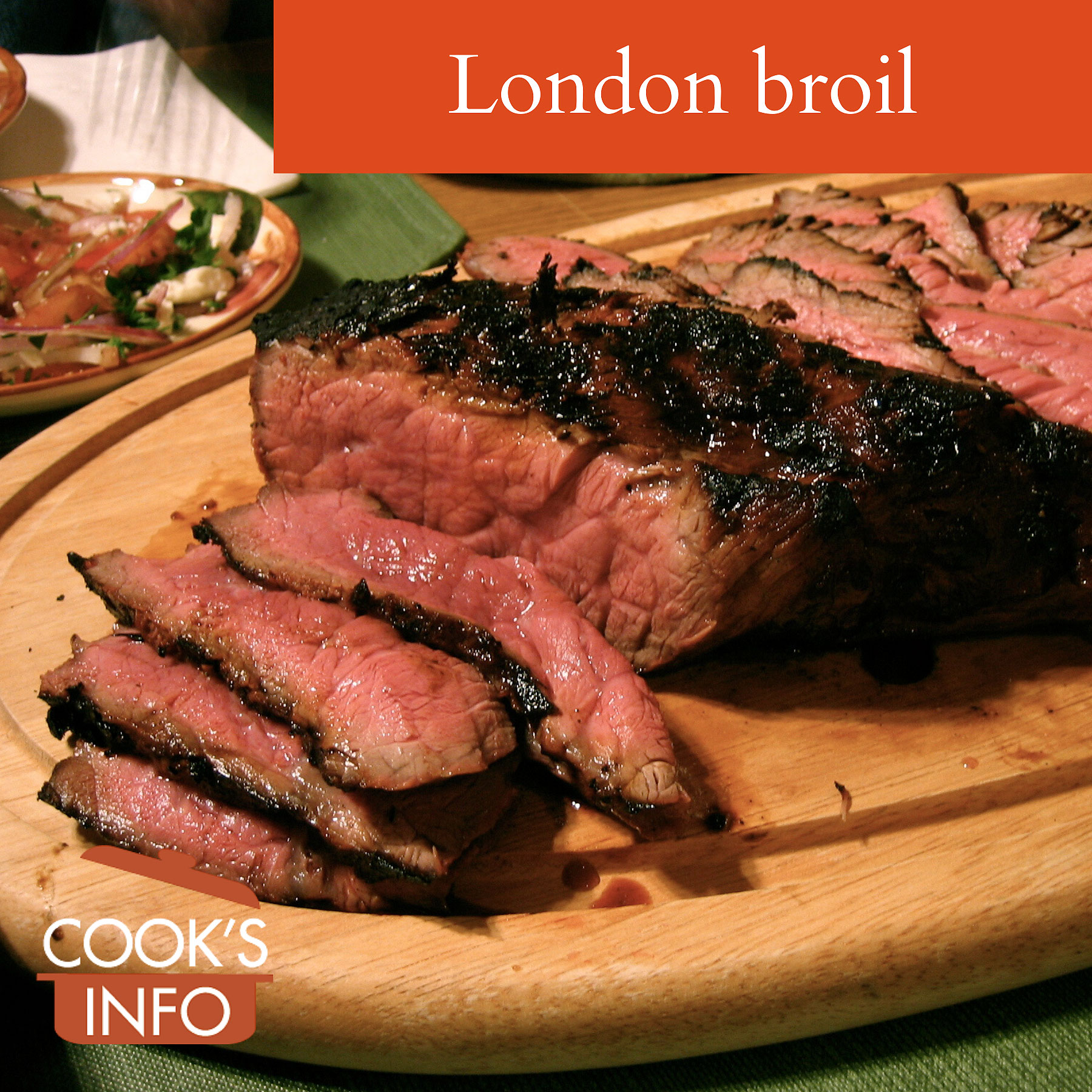 London broil is a cut of beef suited for a technique of cooking beef that converts a tougher cut of beef into more tender slices of cooked steak.

“London Broil [is] a standard luncheon dish in restaurants throughout the country. Although other cuts are sometimes substituted for London Broil, including hip and tenderized chuck, the use of flank steak continues to grow.” [1]Beard, James. American Cookery. Boston, MA: Little, Brown and Company. 1972. Page 261.

If you only like well-done beef, then many people suggest that you not use the London broil technique. The meat needs to end up somewhat rare in the middle, with the ends being about medium-rare. If you cook it any past that, you will have shoe leather and will have wasted a cut of meat that you could have braised or stewed instead.

You may see different forms of beef being sold labelled as “London broil”. There is no legal definition.

The meat needs to marinated before cooking for anywhere from 8 to 24 hours. Heat the grill or broiler, and place the meat in a pan on a rack about 13 cm (5 inches) from the heat source. Cook for 7 to 10 minutes per side.  Remove from the heat, place on a board, and slice the meat thinly across the grain (which probably will mean slicing it width-wise rather than along the length.) You can also do this in a frying pan (don’t worry about the distance from the heat source if you do.)

“[broil] either plain or after being marinated in a teriyaki or barbecue marinade. It cooks quickly, taking 5 to 7 minutes to reach the rare state, and then must be carved on a sharp diagonal in very thin slices….” [2]Ibid.

These are Craig Claiborne’s directions for doing a London broil.

The  London broil technique is not English at all, it is American. James Beard thought that Philadelphia was the actual city of origin, but did not give any backing for his assertion:

“Many different cuts — flank, hanging tenderloin, skirt, rump — but none of the prime ones are used for London broil. This started not in London but in Philadelphia and has swept the country as a luncheon dish. The steaks are broiled, cut in thin diagonal slices, and served often on toast or toasted French bread. Sometimes a Béarnaise sauce, a Bordelaise sauce, or rosemary butter is served with it. Various mustard, also, are excellent with London broil. For accompaniments, one wants crisp potatoes and a salad. This is an ideal sandwich for outdoor entertaining.” [4]Op. cit., page 806.

On Monday, 18 August 1919, the World Restaurant on the 11th floor of the World Building, New York City, advertised a dish they called London broil as a special of the day: “London broil, with French fried potatoes — .48 c” (If you didn’t want that, you could have ham or the table d’hote dinner for 3 cents cheaper). [5] Advertisement in: The Evening World. New York. 18 August 1919. Page 1, col. 1.

In 1922, a newspaper columnist seemed to think that London broil involved pork chops:

“Three chops! How skimpy they would look. Then she remembered seeing on a restaurant menu something called a London broil. She tore open a box of bacon, broiled some, and on each of the three plates put a chop under a pile of crisp bacon slices, with the carrots, mixed with a can of peas and plenty of butter, and potatoes on the side.” [6]Christie, May. Their Married Life column. Bridgeport Telegram: 26 June 1922. Page 11, col 8.

A column in The Evening World (New York) advised that in 1922, the meat for London broil cost 32 cents a pound, and identified the meat as flank steak:

“If you really hanker for roast beef once in a while go ahead and order one — a two rib roast of quality….. Do not turn the roast in cooking and do not cook it over-much. In this way you can leave one side fairly rare for the second day. The second day make slices of the roast, fairly thick — one for each one to be served — and broil them quickly — in a gas broiler or over coals. If there is any thickened gravy left from the day before this should be heated. This is known as “London broil” and is regarded as a delicacy in clubs and hotels.” [ref]Problem of Roast Beef for Two; Preparing Leftovers. Mansfield News. Mansfield, Ohio. 12 December 1923. Page 6, col. 4.

A 1934 column from Iowa advised the leftover roast beef idea for London broil as well:

“A London broil is best planned for the day before when you get a nice roast of beef. Roast the meat quite rare and serve only the outside better done portion. The second day, cut the left-over roast into quarter-inch slices and brown quickly on each side in melted butter. Put on a hot platter, sprinkle with salt and pepper and garnish the dish with crisp watercress or parsley. French fried potatoes will go well with the London broil.” [8]Wilson, Judy. Tasty Dishes for Today. Fairfield Daily Ledger. Fairfield, Iowa. 23 May 1934. Page 4, col. 4.

In 1939, Mrs Gaynor Maddox, a staff Food and Markets writer for the NEA news service, felt that London broil originated in England:

“Foreign dishes can seem just like “home folks” when altered slightly for our American taste. From England, Sweden and Spain come these three low cost foods:

London Broil: One pound flank steak, ¾ teaspoon salt, ⅛ teaspoon pepper. Preheat the oven 10 minutes (about 450 to 500 degrees F). Place the steak first on one side and then on the other, allowing 6 minutes for each side. The surface of the steak should be ¾ to 2 inches below a high flame, the distance depending on the stove and upon the rareness desired. Serve and remove to hot platter. Carve diagonally against the grain. Serve with mushroom sauce.” [9]Maddox, Gaynor. Modern Menus. News Standard. Uniontown, Pennsylvania. 22 August 1939. Page 7, col. 3.

In 1952, Gaynor Maddox reintroduced London broil to her readers as a “new guise” for flank steak. Given that she’d already acknowledged that it existed back in 1939, one can only speculate why she would refer to it as “new”. A writer’s white lie to generate buzz, perhaps? Or maybe it seemed new after the rationing of the war years that had intervened.

“Hearty, homey flank steak, a favorite economy cut, is appearing on dinner tables and in smart restaurants as a full-flavoured tender “London Broil.” Quality is the secret of this new guise for a cut long thought to be suitable only for slow, moist cookery. Top-quality, thick, well-fatted flank steaks may be broiled the same way you would prepare any favorite steak. However, if the flank steak you purchase is the more familiar thin, lean steak with the prominent long muscular texture, stick to your favorite braising method of cookery.

To prepare the London Broil, remove the membrane from both sides of a top-quality flank steak and trim off excess fat and uneven edges. Even though the fat is trimmed from the steak before broiling, it is important that the original steak be well-fatted, both as an indication off top quality and to import flavor and juiciness to the meat.

Score the meat on both sides into diamond shapes by cutting diagonal slices across the steak. Broil quickly in a preheated hot broiler 3 inches from the heat source for 5 minutes. Turn and broil 5 minutes more to give a well-browned surface with a rare interior. Season and carve in thin, slanting slices.

For variation of the London Broil, soak the meat overnight in a garlic oil with a small amount of vinegar added. Remove and oil and rub the meat with a clove of garlic before broiling. Broil one side of the meat, turn and spread with mashed blue cheese. Continue broiling until the cheese is bubbling hot and lightly browned. Unless your flank steak is top-quality and well-fatted, braise it.” [10]Maddox, Gaynor. Steak broiling really simple. Altoona Mirror: Altoona, Pennsylvania. 4 December 1952. Page 30, col. 3.

The first mention we found of London broil in the English press is not until 1971 (searching the British Library’s online newspaper archive in June 2020.)

Mix together Worcestershire sauce, oil, water, lemon juice and salt in a bowl or dish. Place beef in this so that it is covered. Leave to marinate overnight or for at least 6 hours turning once.

Remove meat from marinade and pierce lengthways with a long skewer. Spread with a little sauce and place over hot coals or under a hot grill. [Ed: the English call a broiler a grill.] Cook about 10 minutes on each side for a rare-cooked steak, longer for well-done steak. Spread with more sauce two or three times during cooking. To carve, place on board and cut, slightly at an angle, into thin slices. For 4 to 6.” [11]Some recipes for you to enjoy. Leicester Chronicle – Friday 18 June 1971. Page 11, col. 4. 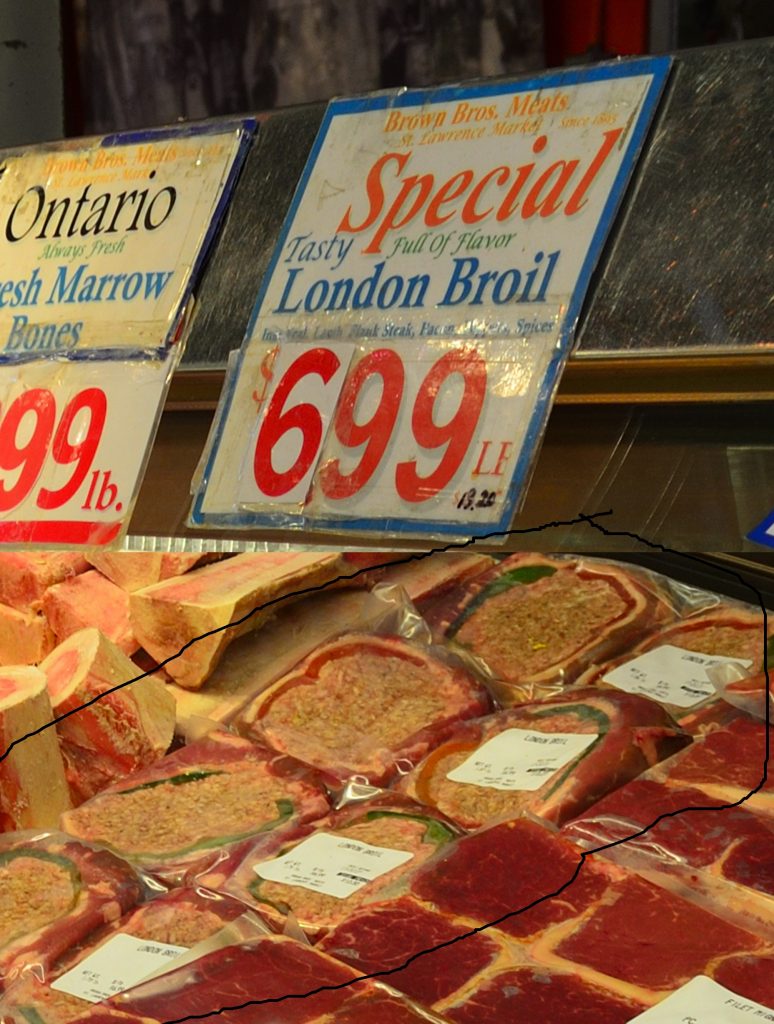 Stuffed London broil is a variant that has emerged. It is beef rolled around a sausage or seasoned pork stuffing, then sliced. It is generally prepared and sold by butchers.

Sometimes, you will see the term “London broil” used to refer to a mixed grill platter containing various meats including lamb and pork.

This web site generates income from affiliated links and ads at no cost to you to fund continued research · Information on this site is Copyright © 2023· Feel free to cite correctly, but copying whole pages for your website is content theft and will be DCMA'd.
Tagged With: American Food, Beef Steaks, Cooking Techniques, London Broil, Steak