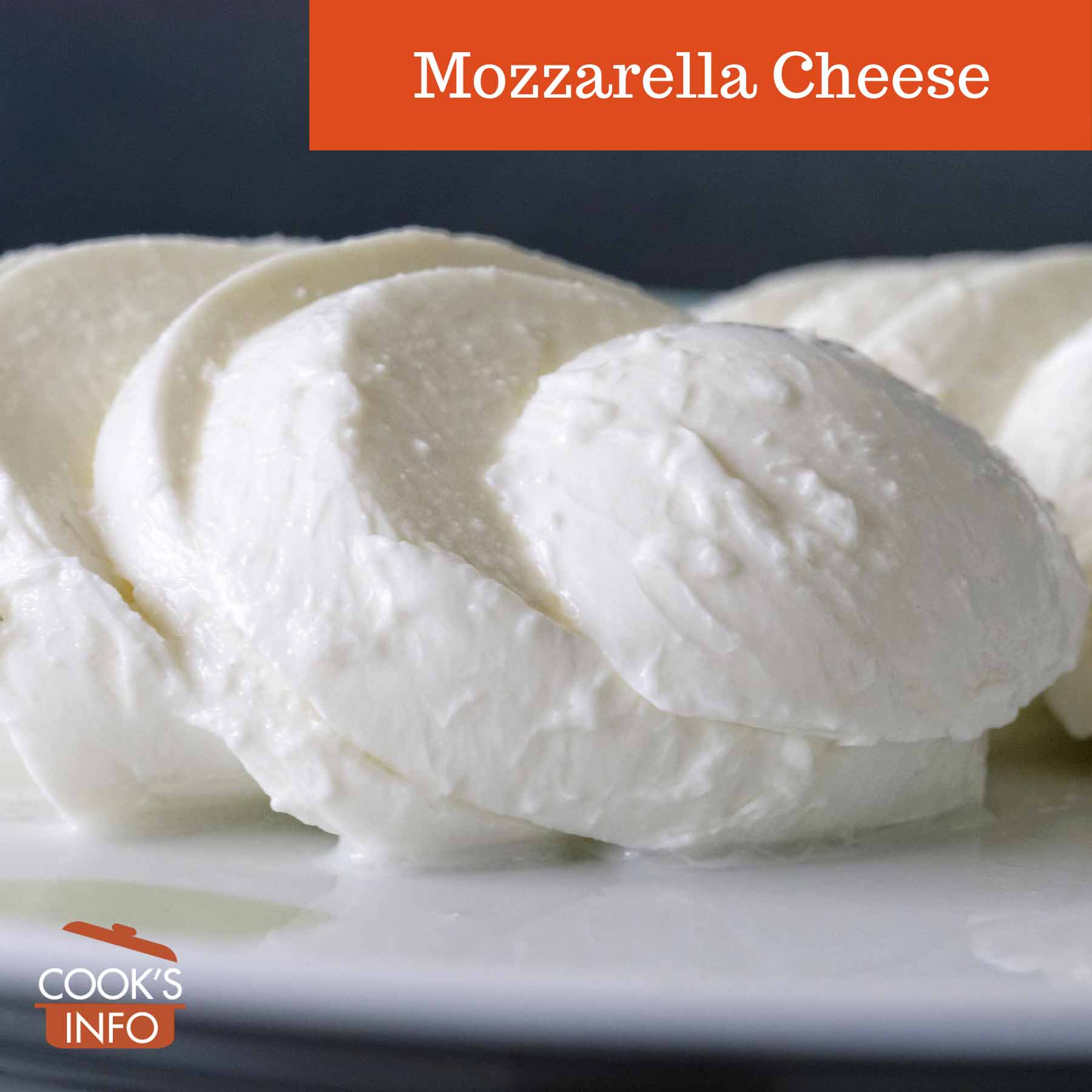 Mozzarella is a fresh, stringy Italian cheese made from water buffalo milk. Its full name is “buffalo milk mozzarella”, or “Mozzarella di Bufalo” in Italian.

The cheese is pure white. It has a creamy texture and a slight fresh tang to it, but otherwise little other taste. If it has a sour taste, it is getting old.

The cheese is sold in soft, semi-spongy balls whose stringy texture is somewhat reminiscent of a cooked chicken breast. The balls will have a very thin skin on them. You’ll often see them in a tub of liquid, which some people think is water, but which is actually some of the cheese’s own whey.

Two of the better brands of buffalo milk mozzarella are considered to be Garofolo and Delizie Alburnine.

This style of mozzarella is also made in Romania and Bulgaria.

Water buffalo milk is whiter than cow’s milk. It is also used to produce Indian paneer.

How mozzarella is made

Whole water buffalo milk is pasteurized, then cooled to 32 C (90 F.) Rennet is added to curdle the milk, then the curd is cut. The curd is allowed to sink to the bottom, and rest for a bit in the whey, so that the acids can soften the curd. Then, it is washed with hot water 93 C (200 F) flowing through it, then stirred with paddles. The really hot water and the agitation make the curd first coagulate into one lump, then spin out in strands which are stretched, cut off in pieces and rolled by hand into balls. Rolling by hand preserves the nature of the strands, giving the fresh mozzarella its layered texture, and traps a bit of the whey still in the balls between the layers. The balls are then cooled, salted and sent off for sale.

Real mozzarella is a PDO protected cheese in Europe as of 1996.

Its production quality is administered by a group of 200 producers called the “Consorzio di tutela della Mozzarella di bufala (Consortium for the Protection of Buffalo Milk Mozzarella.) [1]The consortium was disbanded by Luca Zaia, Italy’s Agriculture Minister, on 19 January 2010, for failing to protect the standards of the cheese. His ministry had tested 530 samples of the cheese, and found that 25% of the samples being sold as pure buffalo milk mozzarella were in fact adulterated with at least 30% cow’s milk. Even the president of the consortium, Luigi Chianese, was alleged to have adulterated his own cheeses. “A novembre i numerosi controlli nella grande distribuzione hanno rivelato che nel 25% dei campioni analizzati, le mozzarelle non erano vere Mozzarelle di bufala poiché contenevano almeno il 30% di latte di vacca.” — Mozzarella di bufala, consorzio scandalo Zaia: «Il presidente annacquava il latte». Rome: Il Messsaggero. 20 January 2010.

The PDO branded cheese (the logo is red and green, with the head of a water buffalo on it) can only be made in the Apulia, Campania and Lazio areas of Italy.

This is the Italian name for mozzarella made from cow’s milk instead of buffalo milk, as it is anywhere outside Apulia, Campania and Lazio in Italy.

It is almost as white as buffalo milk mozzarella, but doesn’t quite have the same texture. It is more rubbery. In making the cheese, the emphasis is more on its having a somewhat longer shelf life than in being eaten fresh.

In North America, any “fresh” mozzarella you buy is almost certainly going to be made from cow’s milk and therefore actually be “Fiore di Latte.”

Buffalo milk mozzarella is so moist and soft that it melts quickly — the heat alone from just-drained pasta will melt it.

Store in fridge. If your fresh mozzarella doesn’t come in a tub of liquid (which is actually whey from the cheesemaking), store it in the fridge in fresh water and use within 2 to 3 days at the most. Change the water daily.

On a good day, the history of the mozzarella seems to stretch back to the Romans, and even to Egypt before that.

The real curiosity, though, would be how water buffalo, which are native to south-east Asia, got to Italy in the first place, and the truth is, no one knows for sure. The best stories involve Anthony and Cleopatra, with Anthony sending the water buffalo and the cheese recipe back to Caesar in Rome.

Other sources say the buffalo could have been introduced by any invader, or by the Romans, or could have just always been there. Some say the Crusaders brought them back to Italy.

What is certain, however, is that mozzarella originated in the southern Italian regions of Campania and Sicily.

After World War Two, Italy initiated a water buffalo breeding program to optimize the yield and characteristics of the milk for mozzarella production with the optimal balance of protein and fat.

In 2003, a farmer in Vermont started a herd of 50 water buffalo, to see if he could make a go of making something close to the real thing there.

In the spring of 2008, under pressure from the EU, Italy ordered a recall of some types of mozzarella cheese potentially contaminated with a cancer-causing dioxin. The cheeses recalled were made by some 25 companies in Italy’s Campania region. The dioxin was believed to have come from the fumes of garbage burning in the Naples area during the garbage crisis there at the time.

A second scandal emerged in early 2010, when it was found that some mozzarella cheese being sold as pure buffalo milk cheese in fact contained up to 30% of the cheaper cow’s milk.

The name probably comes “mozzare”, meaning to cut off, referring to cutting off the strands of cheese. Mozzarella would mean something like “little cuttings.”

Squires, Nick. Buffalo mozzarella inquiry collapses after chief’s own cheese fails purity test: An inquiry by farmers into the adulteration of Italy’s prized buffalo mozzarella has collapsed after allegations that its leader watered down his own cheese with cheaper cow’s milk. London: The Telegraph. 20 January 2010. 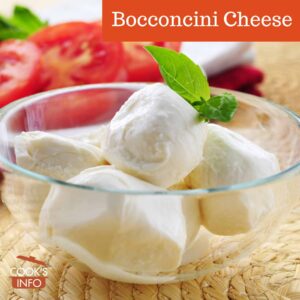 Bocconcini cheese is small balls of mozzarella, about the size of chicken eggs. They are usually sold in tubs, packed in water to keep them fresh. 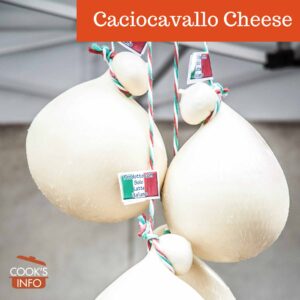 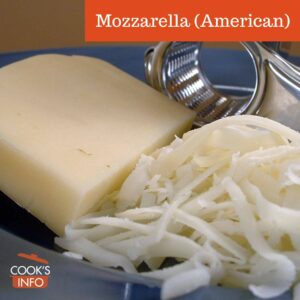 American-style mozzarella comes in blocks, looks like a pale yellow cheddar and has a rubbery texture. It is almost always used as a cooking cheese. 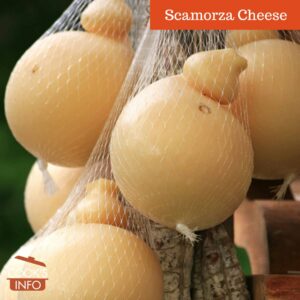 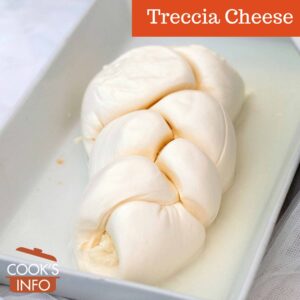 Treccia cheese is a braided version of mozzarella or scamorza cheese. It is pale yellow, and soft and stringy.

This web site generates income from affiliated links and ads at no cost to you to fund continued research · Information on this site is Copyright © 2023· Feel free to cite correctly, but copying whole pages for your website is content theft and will be DCMA'd.
Tagged With: Italian Cheeses, Lazio Food