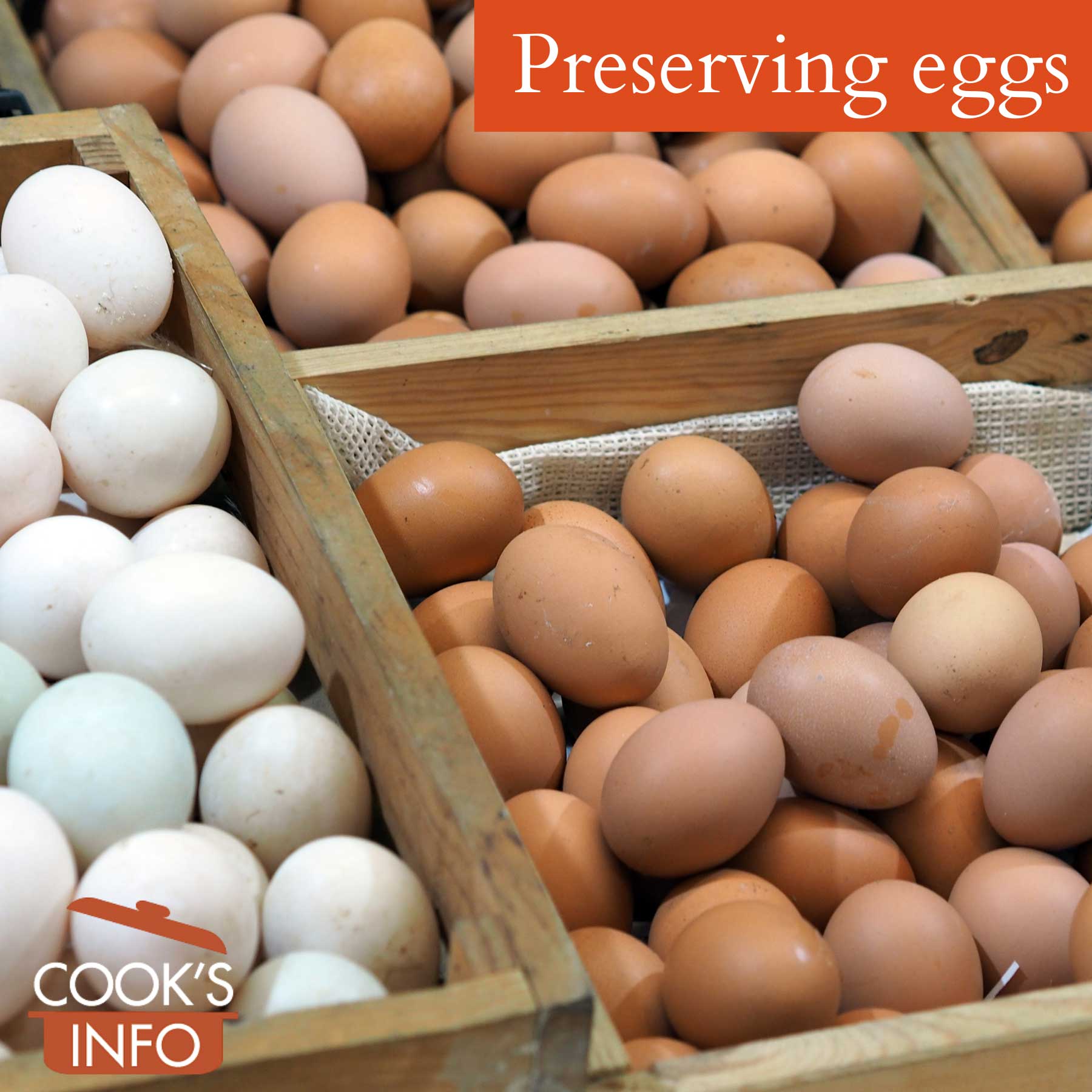 There are several historical techniques for preserving whole shell eggs, raw and uncooked, without refrigeration. Modern techniques include refrigeration, freezing and dehydration.

Refrigeration is the default modern means of extending the storage life of eggs. In North America, all eggs are refrigerated. In Europe, however, the default is to store them out of refrigeration. For a discussion of why the two different approaches exist safely in their own contexts see the main entry on eggs for the discussion of egg storage.

This technique involved coating the egg shells with a substance that prevented air from getting into the egg. Traditionally, a substance such as wax, or fats such as lard or butter, were used. You’d put some lard or butter on paper and then use that to wipe the fat over the egg shell, or, melt the substance being used and when it had cooled a bit, dip the shell eggs in. Mineral oil is used commercially as a coating even now. See: Buttered eggs ; Waxed eggs.

In the first half of the 1900s, people at home would preserve large quantities eggs in a bucket or crock filled with an isinglass solution.

The steps given were as follows:

Eggs stored this way would keep for 6 months to a year.

When you use them, smell to see if any have gone off, and crack them one at a time into a saucer to inspect before adding to what you are making. The ones that went off may have had undetectable fine cracks in the shell.

The eggs should be used as an ingredient in something, such as baking, rather than as say a boiled or fried egg on their own, as they will have a slight chalky taste. The shells get fragile, so you wouldn’t want to use one of these eggs as a boiled egg, anyway, as the shells will crack. At around the six month point, the whites will get too thin for whipping.

In more recent historic times, you could also use liquid paraffin or a purchased liquid isinglass, rubbing the liquid over them. In fact, you could buy shell eggs dipped in isinglass in Britain right up until the early 1960s. It puts a sort of varnish shine on the eggs.

Some people feel the technique is still viable. Isinglass is bacteria-resistant, and helps prevent organisms from entering the eggs, as well as helping prevent evaporation of the water content of the eggs.

However, what the isinglass storage technique doesn’t address is bacteria that might be inside the egg, inherited from the chicken that laid it. Specifically, salmonella. And if the egg is stored at room temperature, the salmonella inside the egg can multiply quickly to the point that the egg becomes dangerous to eat. Temperatures below 5 C (41 F) inhibit the growth of salmonella. [1]”The growth temperature range of [salmonella] is between 5 – 45°C with an optimum growth temperature of 35 – 37°C.” Tajkarimi, Mehrdad. Salmonella spp. University of California-Davis. California Department of Food and Agriculture. Animal Health and Food Safety Services Division. APHR 250, B6. 04/04/07. Accessed November 2020 at https://www.cdfa.ca.gov/ahfss/Animal_Health/PHR250/2007/25007Sal.pdf

Ensuring that the egg is thoroughly cooked afterward until the yolk is not runny, or using the egg in baking a cake, etc., may address the safety concern, as that should result in a nearly total if not complete reduction in the amount of any salmonella bacteria present. There might, however, be an issue if the egg were used raw in a cocktail such as egg nog, or served with a runny yolk.

This also might be less of a concern in jurisdictions such as the United Kingdom where the laying hens are vaccinated against salmonella under the Red Lion scheme.

From ‘The Times’ of London, Feb. 1939 re. preserving eggs: “….apart from the cost of the eggs there need be no further expenditure beyond a few pence for waterglass sold for the purpose and obtainable at a local store……”

A commercial substance in Australia used to be called “Keepegg.” It was a waxy, vaseline-like substance in a jar that you’d smear on the egg shells. It was used a lot during the Second World War, particularly by people living in remote places. Even Dame Edna mentioned her family using it while she was growing up.

Note that the same concerns about storing possibly salmonella-infected eggs in unrefrigerated circumstances as per isinglass above still apply.

You can also pickle the eggs .

Don’t freeze whole shell eggs; they will expand and explode and be unusable.

Crack an egg into a small bowl or saucer. If the egg is good, then add it to a larger bowl. Repeat procedure until all eggs have been examined and added to large bowl.

To prevent the eggs turning grainy when frozen, you may optionally per cup (250 ml / 8 oz) of cracked egg add one of the following: 1-½ tablespoons of sugar, 1-½ tablespoons of corn syrup OR ½ teaspoon or salt. Mix the yolks and whites thoroughly but do not whip or add air in. After mixing, strain through a sieve for a more uniform mixture. Put in a freezer-safe container, leaving 1 cm (½ inch) headspace. Seal the container, and freeze.

To freeze eggs separately as yolks and whites, use three separate ice cube trays. Crack the eggs, putting the one in one small dish, and the yolk in another small dish. If the contents of the egg look viable, then add the yolk to one larger bowl, and the white to another separate larger bowl. Continue until all eggs to be frozen are cracked.

To the yolks, to prevent possible graininess optionally add per cup (250 ml / 8 oz) of yolk one of the following: 1-½ tablespoons of sugar, 1-½ tablespoons of corn syrup OR ½ teaspoon or salt. Mix the yolks  thoroughly but do not whip or add air in. Strain for a more uniform mixture.

Mix the yolks thoroughly but do not whip or add air in. (No sugar or salt is needed.) Strain for a more uniform mixture.

When finished, wrap the ice cube trays in tin foil, and freeze.

Whites that have been frozen won’t whip quite as well as fresh whites.

For a more thorough discussion of freezing eggs, see Freezing eggs on the site for the National Center for Home Food Preservation.

“Eggs to be preserved whole in the shell should be clean and dry, but do not wash them as the shell is porous and this practice can cause disease. Instead, wipe them with a damp cloth and then a dry one. You can then rub them with buttered paper or liquid paraffin so that all air is excluded and they will keep for six months or longer… When I was a child we used to store eggs in isinglass, which can be bought from a good pharmacist. The eggs are layered point down in an earthenware crock or glass jar. You pour over the cooled liquid, ensuring the top layer of eggs is completely submerged, and then cover to keep out bugs and dirt and to prevent evaporation. Eggs stored like this will keep from six months to a year, but they should be used for baking or made dishes as they have a slight taste if boiled or poached and the shells will crack if boiled. After six months the whites go a little thin so they are not really suitable for whipping.’ — Wright, Clarissa Dickson and Johnny Scott. A Greener Life. London: Kyle Cathie Limited. 2005. Page 119.

“Perhaps it is now trendy to have chickens in the backyard. In my Moonee Ponds childhood, people who kept fowls were thought to be slightly common — which meant the whole of Moonee Ponds. Then during the war we used to smear eggs with an ointment called Keepegg so they’d last for ages.” — Quoted by Suzanne Carbone and Lawrence Money. “Warney lays his cards on the table.” Melbourne, Sydney: The Age. 31 October 2007.

This web site generates income from affiliated links and ads at no cost to you to fund continued research · Information on this site is Copyright © 2023· Feel free to cite correctly, but copying whole pages for your website is content theft and will be DCMA'd.
Tagged With: Eggs, Pickling