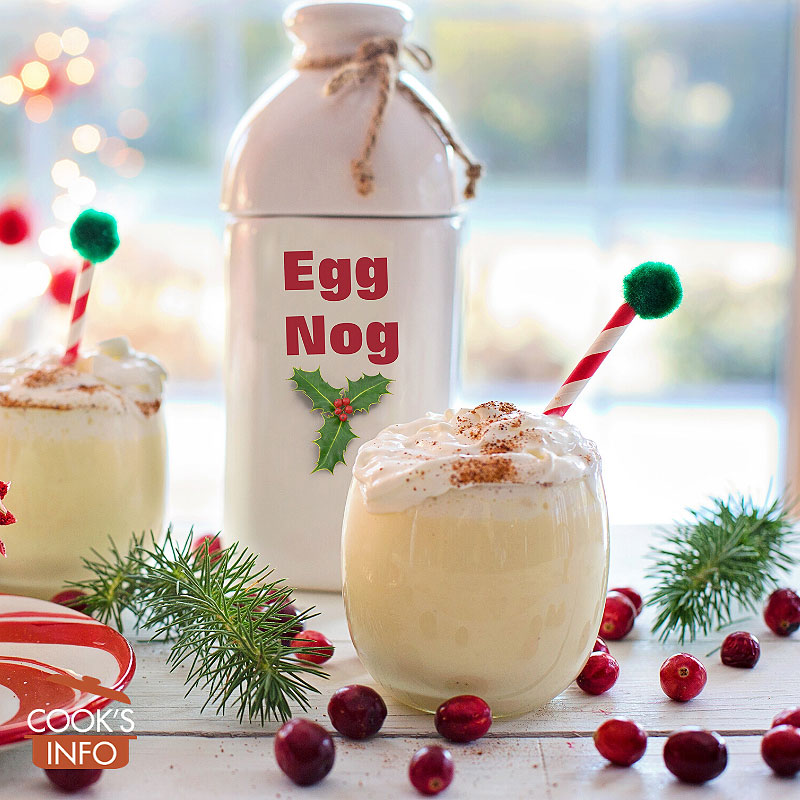 Egg nog (aka eggnog) is a creamy, rich drink that is very popular in the UK and in North America. Typically, it is served over course of the Christmas holidays.

How is egg nog made?

Generally, egg nog is made from chicken eggs beaten with sugar, milk or cream, with some kind of alcohol added either right in the mix, or upon serving directly into the glass. Additional flavourings may be added.

The alcohol in North America is usually rum, but in the American South (especially in New Orleans) it is often bourbon.

Commercial egg nog in cartons is sold in chiller cabinets of stores in the lead-up to US Thanksgiving and Christmas. It disappears again for another year shortly after New Year. This egg nog is usually UHT pasteurized for safety and to give it a long shelf life under refrigeration. It is sold in cardboard or plastic cartons and jugs, and in some areas, in plastic bags.

Bottled egg nog with the alcohol already in it is also sold. Popular brands include Old Tom’s and Evan Williams; there are also store brands such as Trade Joe’s, and Costco’s Kirkland. This is shelf stable and does not need refrigeration until opened. 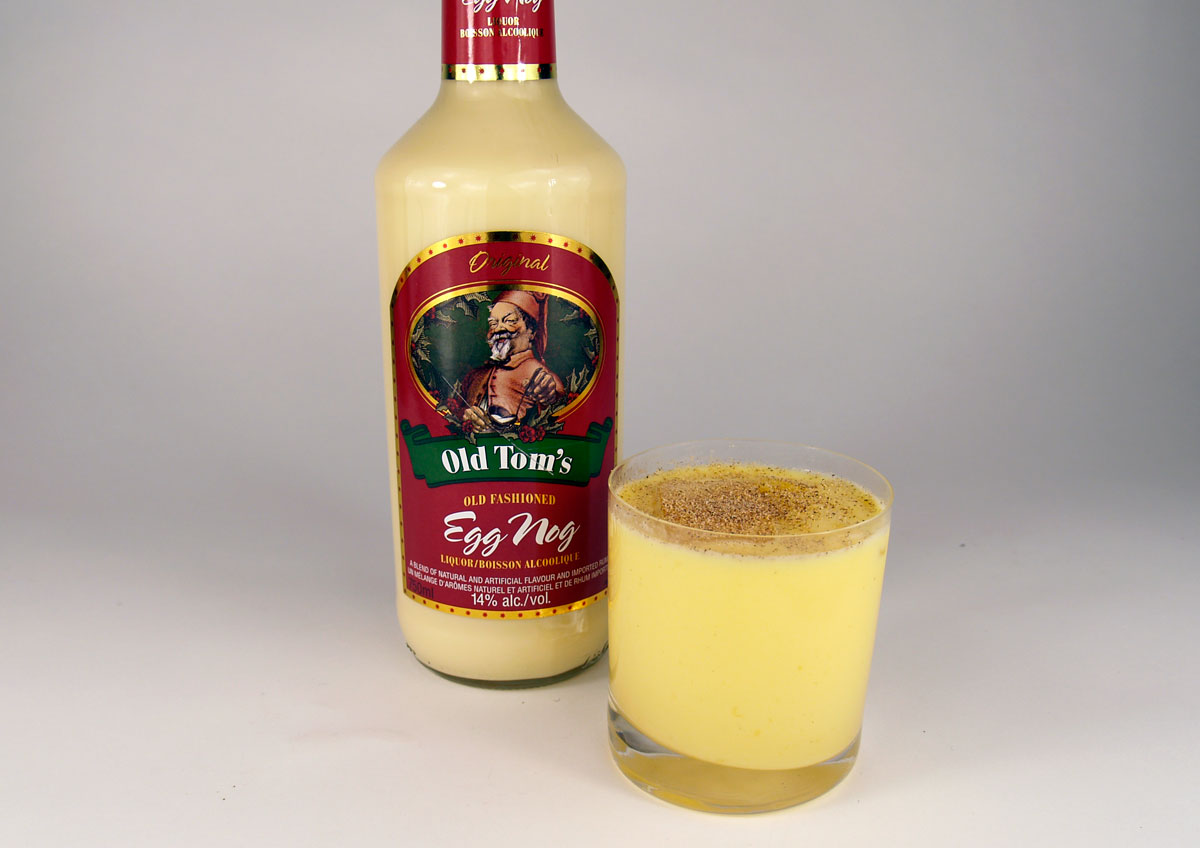 What is the safety concern?

Safety concerns can arise when making  your own egg nog from whole, shell eggs.

There are several food-safety risks with raw eggs, the most well-known of which is salmonella.

“A possible concern is that eggnog made with raw, unpasteurized eggs could contain Salmonella, which is a pathogen that can cause foodborne illnesses… Salmonella can cause people to develop diarrhea, fever and abdominal cramps within 12 to 72 hours of infection, with the symptoms typically lasting four to seven days. In some people, the diarrhea can be so severe that it leads to hospitalization or even death, the CDC says.” [1]Turner, Tracy. Chow Line: Eggnog Safe to Drink if Pasteurized or Cooked. Ohio State College of Food, Agricultural, and Environmental Sciences. 14 December 2017. Accessed January 2020 at https://cfaes.osu.edu/news/articles/chow-line-eggnog-safe-drink-if-pasteurized-or-cooked

Commercially-made egg nog is usually always pasteurized which kills off salmonella bacteria as well as other nasties.

“If you purchase eggnog from the grocery store, you can typically expect that it has been pasteurized to eliminate Salmonella, meaning that it has been heat-treated to kill harmful microorganism. To be sure, you can check the label or ask a clerk if the product is pasteurized.” [2]Turner, Tracy. Chow Line: Eggnog Safe to Drink if Pasteurized or Cooked.

How to make your homemade egg nog safe

“If using regular eggs that have not been pasteurized use a recipe in which you cook the egg mixture to 160 F. At 160, the egg mixture thickens enough to coat a spoon. Follow the recipe carefully. Refrigerate it at once. When refrigerating a large amount of cooked eggnog, divide it into several shallow containers. Then it will cool quickly.” [3] Brandt, Kathy and Suzanne Driessen. Making homemade egg nog that’s safe. University of Minnesota Extension. 2018. Accessed January 2020 at https://extension.umn.edu/preserving-and-preparing/making-homemade-egg-nog

“The egg base mixture for eggnog should be gently cooked to an internal temperature of 160 degrees Fahrenheit (71 C), stirring constantly. This will kill Salmonella that may be present in the egg mixture. After cooking, the egg mixture should be chilled before adding it to the milk and other ingredients, according to Foodsafety.gov.” [4]Turner, Tracy. Chow Line: Eggnog Safe to Drink if Pasteurized or Cooked.

Here is a video from North Carolina State University showing a typical egg nog recipe, with the safety step added in:

It may seem witty to just breezily say that the alcohol will take care of any nasties present, but that’s not actually the case. The University of Minnesota Extension Service says, “Adding alcohol inhibits bacterial growth, but it cannot be relied upon to kill bacteria.” [5] Brandt, Kathy and Suzanne Driessen. Making homemade egg nog that’s safe.

“Ethanol, the alcohol in beverages, should kill some of the pathogens that might be there… [but] using alcohol as a protective measure isn’t a simple venture…. in [a 2010] experiment, ethanol provided a 1.5 log (that’s between 90 and 99 percent) reduction in Salmonella in 24 hours. That’s not good if you’re looking to make and serve eggnog, particularly since no reduction in pathogens was seen within the first 60 minutes after adding alcohol. “The cream also complicates things in eggnog as it has fat in it – and high fat environments … serve to protect Salmonella cells,” Chapman says.” [6]Shipman, Matt. If Eggnog Has Eggs in it, Why Is it Safe to Drink? NC State Extension. 15 December 2014. Accessed January 2020 at https://news.ncsu.edu/2014/12/eggnog-food-safety/

There are many traditional egg nog recipes into which you can easily incorporate the pasteurization step.

Here’s a recipe from Utah State Extension Service which has that step built in, as well as reducing how fattening egg nog can be. [8]Washburn, Carolyn. Ask an Expert: Five Tips for Safe Holiday Eggnog

Egg nog cannot be frozen because it will separate and have an unpalatable texture upon thawing.

Bottled egg nog with alcohol already in it does not need to be refrigerated until the bottle has been opened.

Egg nog began being made apparently in the 1700s, and was well known both in America and in Britain at the time. But in England, only the upper classes would have drunk it at first — the ordinary people in the cities wouldn’t have trusted any of the milk they had access to at the time. It was more popular in America, where people were closer to farms they knew and milk they trusted.

In England, they mixed it with brandy, madeira or sherry. But in America, rum was more popular, as the other spirits used in England were heavily taxed by the time they arrived in the New World.

Clementine Paddleford covered a brand of commercial egg nog in 1945 for Gourmet Magazine:

“Even the cows are celebrating for Christmas. Sheffield Farms report their dairy herds are giving eggnog by the quart, mixed to charge the merry bowl. Apparently the cows have added to their feed ‘sugar and spice and everything nice,’ including a touch of rum flavoring. This eggnog which you can order through the milkman (or having no milkman, a local branch of the company) combines rich cream with eggs, sugar, nutmeg, and the flavor of Jamaica rum. A smoothly blended pleasant drink as it is without spirits to use just as it comes from the bottle. No beating to do, no additions to measure in, nothing to do unless you wish to add a ‘stick of dynamite’ from your liquor shelf. This ready-made eggnog must be ordered three days in advance and is available throughout the holiday season, December twenty-third to January first, inclusive.” — Paddleford, Clementine (1898 – 1967). Food Flashes Column. Gourmet Magazine. December 1945.

Egg nog literally means eggs inside a small cup — apparently. There doesn’t appear to be any general agreement on how to spell egg nog — eggnog (all one word) seems to be equally as valid. 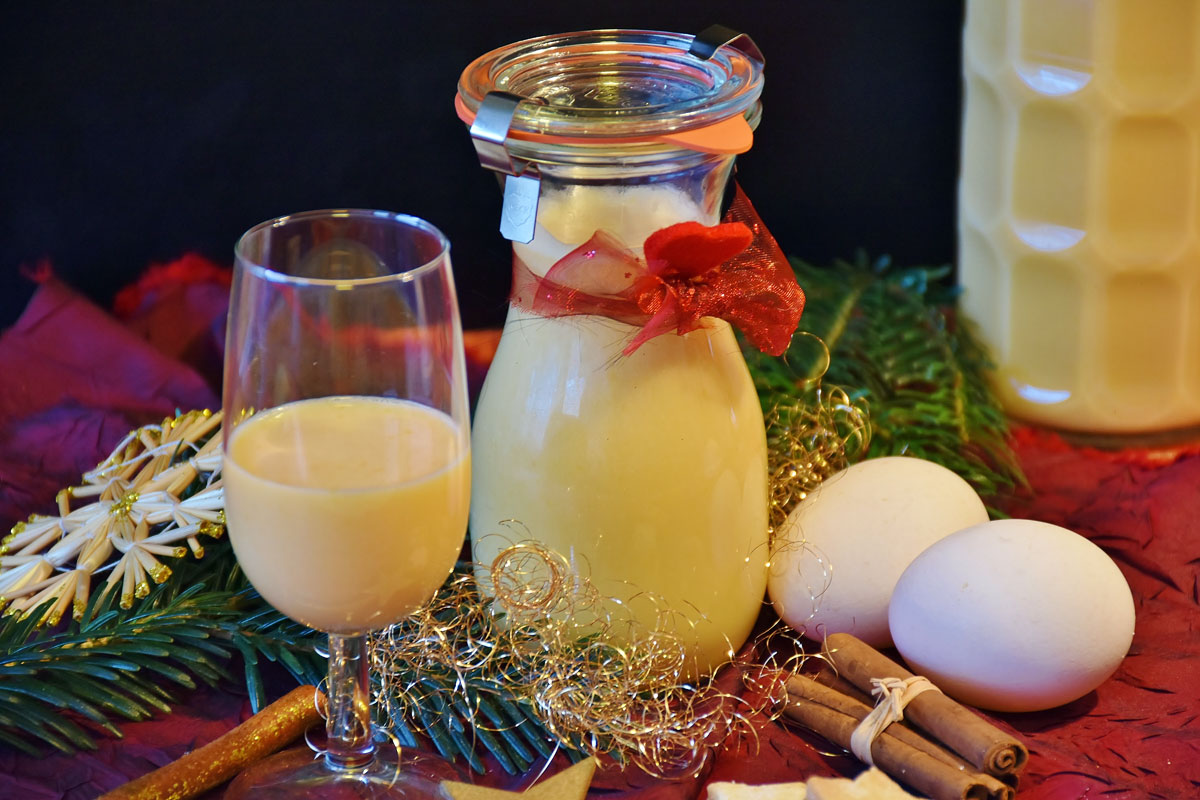 This web site generates income from affiliated links and ads at no cost to you to fund continued research · Information on this site is Copyright © 2022· Feel free to cite correctly, but copying whole pages for your website is content theft and will be DCMA'd.
Tagged With: Eggs, Soft Drinks