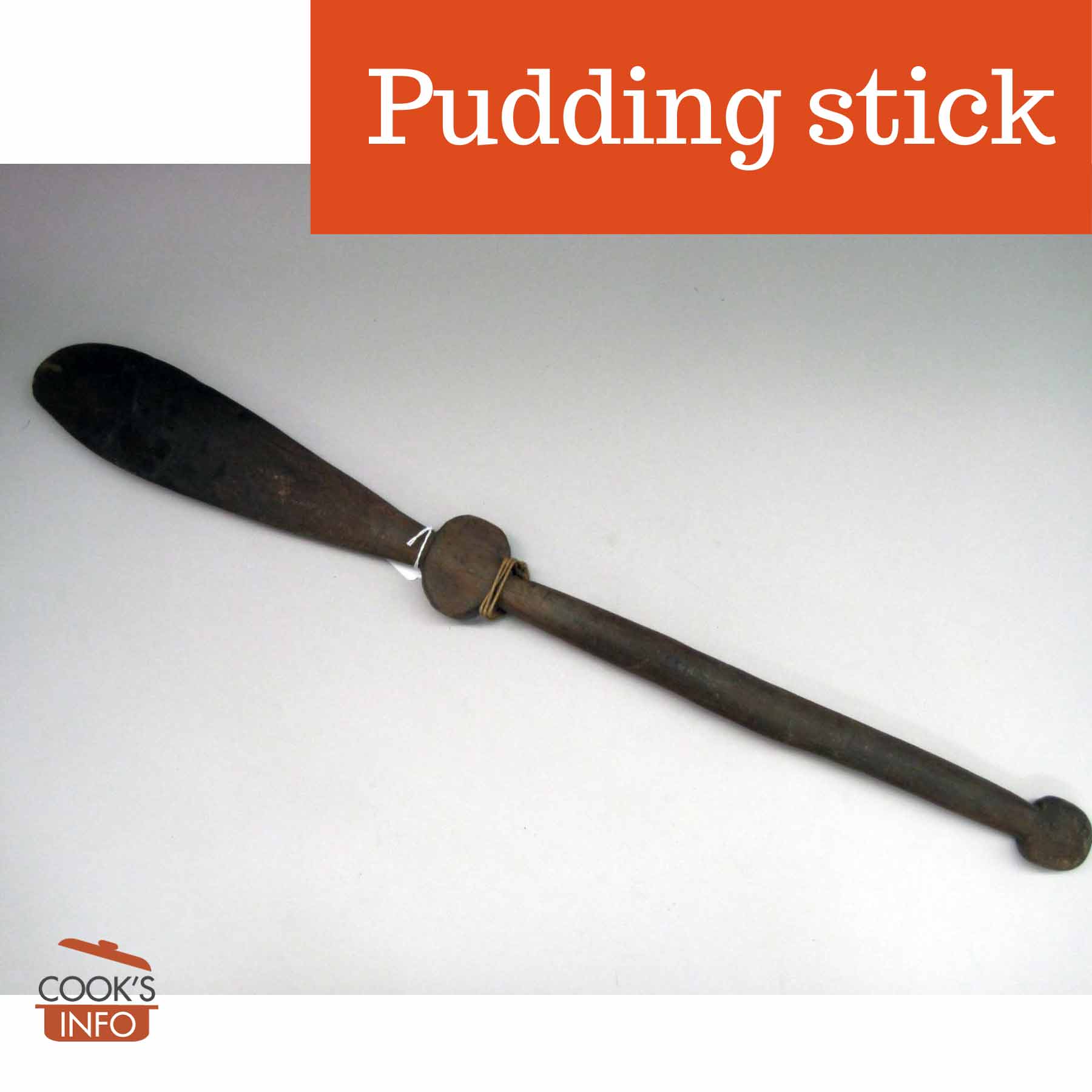 A pudding stick is a kitchen utensil that is halfway between a spoon and a spatula in terms of both design and use. It is a utensil with a long, narrow handle that is broadly flattened at the stirring end, making it resemble a paddle. It is used to stir thick mixtures. Typically they were carved from wood, but examples have also been seen of them made of a metal such as wrought iron.

Because a pudding stick has more contact area at the bottom of it than a spoon, it is more useful than a spoon for scraping the bottom of a pot and preventing a pudding or porridge from burning. And because its handle is narrow, it can be moved through thick mixtures with less resistance and therefore less effort.

Early designs were usually quite long in order to let you reach into an open-fire hearth without burning your hands. Later, as stove-tops became prevalent, the handles got shorter.

The 18th century English cook-book writer Eliza Smith refers to a pudding stick in her book, The Compleat Housewife. In a recipe for Plum Cake, she suggests a pudding-stick be used in stirring the batter before baking:

At the start of the 1800s, Harvard University had a “Knights of the Order of the Pudding Stick” club. [2]”Mr. Alfred C. Potter exhibited the book-plates of three Harvard clubs, two of them long extinct and practically forgotten, the other still in existence. The earliest of these clubs was “The Knights of the Order of the Pudding Stick.” Its book-plate is a simple printed label, with the name Daniel Parkman (H. C. 1813) written on it as donor and the date 1811. Of this club Mr. Potter has been unable to find any mention, but is inclined to think that soon after 1811 it merged with another club, “The Order of the Knights of the Square Table.”” — Publications of The Colonial Society of Massachusetts. Boston, Massachusetts: The University Press. Vol. 24: Transactions, 1920-1922. January Meeting 1921. Accessed January 2022 at https://www.colonialsociety.org/node/358#st25

Pudding sticks were popular in Victorian kitchens. In the mid-1800s, the American cookbook writer Eliza Leslie refers to it as a “mush stick” and gives a description of it:

“Stir hard with the mush-stick, (a round stick about half a yard long, flattened at the lower end)…” [3]Indian Mush. In: Eliza Leslie’s Lady’s New Receipt Book (Philadelphia, 1850)

Pudding stick also came to be a derogatory term that canoeists would apply to an unsatisfactory paddle.

A pudding stick is also the name use for a prepared snack-food style of what North Americans call “pudding”. Made by the Jello-O company, these pudding sticks come in boxes of 8 individual-sized serving portions. Each portion of pudding is in a packaged cylinder. You open a tab at the top, and squeeze the container and the pudding rises out for you to suck. Then you discard the container.

These pudding sticks come in many different flavours.