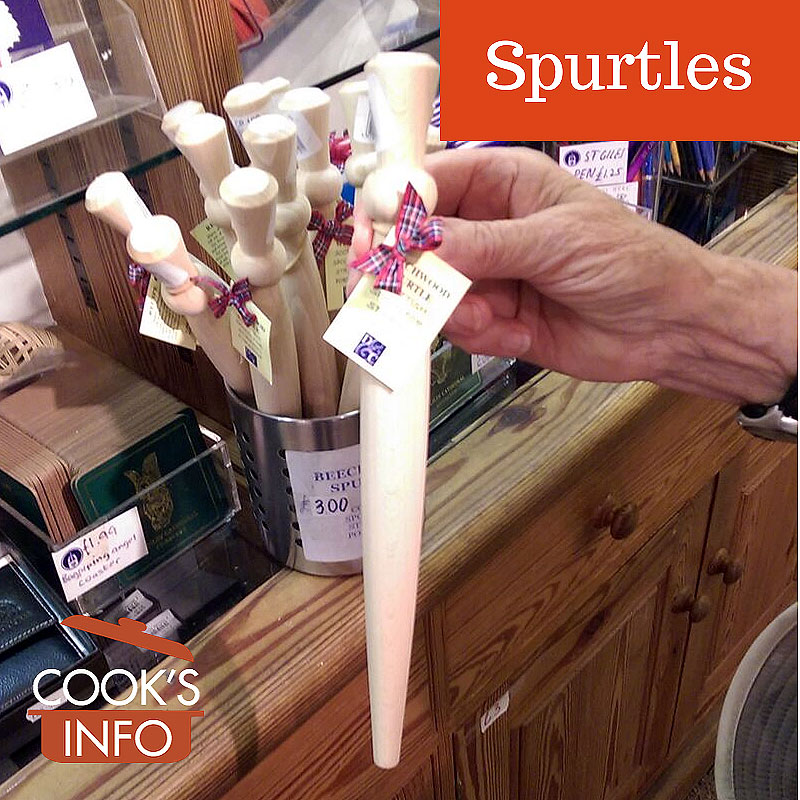 A spurtle is a rod-shaped stirring implement for porridge.

One end is a handle; the other end is just a round stick — no flattened edge like a spatula, or no cup-shaped indentation like a spoon. It’s just shaped like a pestle (as in a mortar and pestle.)

The handle end is usually decorated with a carved thistle design.

The spurtle allows long, slow stirring and cooking of the porridge.

If you stir your porridge counter-clockwise, you risk invoking the devil.

In the 1970s, the television cook Graham Kerr promoted spurtles:

“GRAHAM KERR, TV’S GALLOPING GOURMET. He cooks with a spurtle. Graham Kerr says he wouldn’t be without his spurtle when he prepares dishes on his television program and in his own kitchen. You’ll find this handy cooking tool can make it easier for you to prepare your favorite recipes (like the one in this ad), too. The spurtle can be used for mixing, pouring, lifting, and turning. It’s about 10 inches long, and made of close-grained hardwood. Perfect for use with mixing bowls and pans. You can get one of these handy spurtles FREE from Kellogg’s. Just send us the required proofs of purchase as directed below.” — Advertisement in Pomona Progress Bulletin. Pomona, California, US. 12 November 1972. P. 90.

In different areas of Scotland, a spurtle can also be referred to as a “Theevil”, “Theedle” or “Thible.”

This web site generates income from affiliated links and ads at no cost to you to fund continued research · Information on this site is Copyright © 2022· Feel free to cite correctly, but copying whole pages for your website is content theft and will be DCMA'd.
Tagged With: Scottish Food, Treen