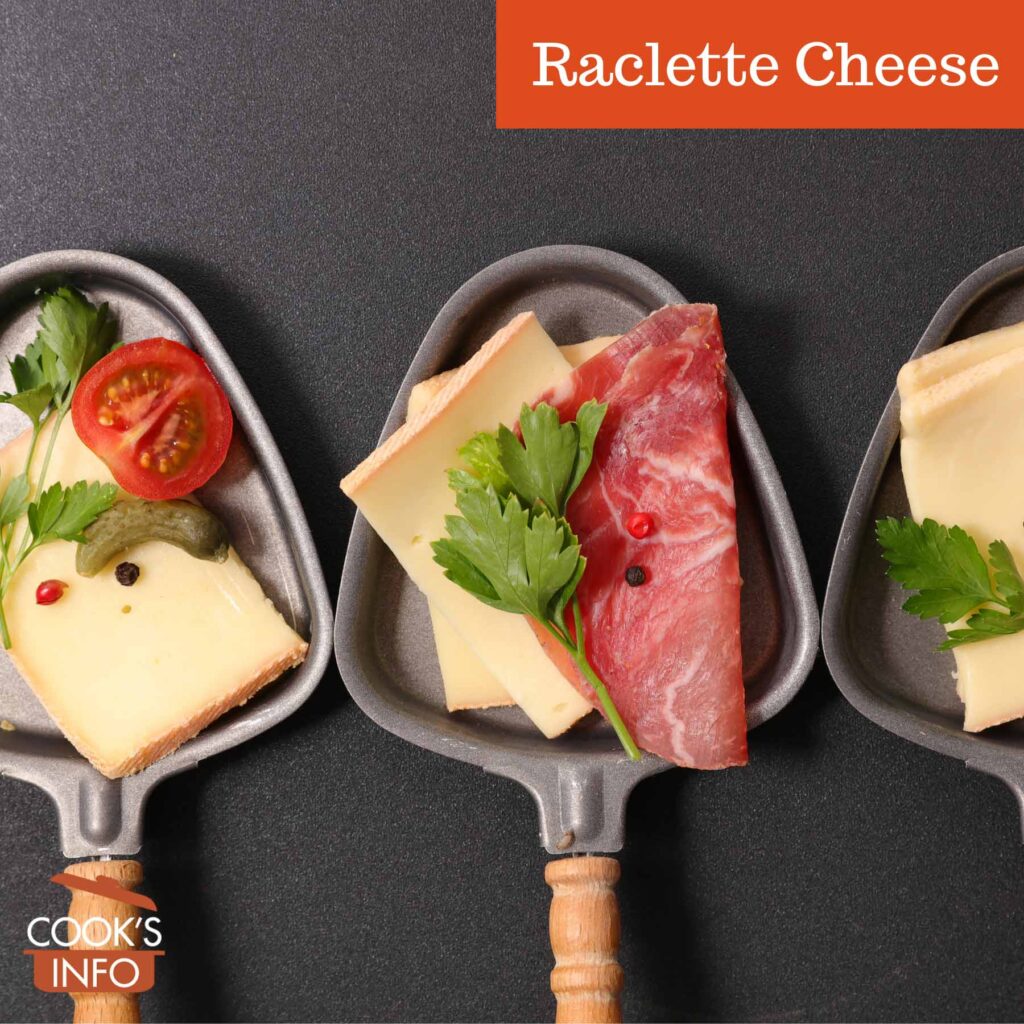 Raclette is a mild cheese with a slightly nutty taste similar to that of gruyère. There are French and Swiss versions.

It is a washed-rind cheese whose light-brown, slightly-sticky rind is inedible.

The cheese is semi-soft, and off-white in colour, with minute air bubble holes in it. It is “designed” to melt well. In fact, heating raclette makes its flavour come alive.

Most raclette cheeses are made from raw milk from cows.

Raclette is also used as the name of a meal based on the cheese. See Raclette (Meal). 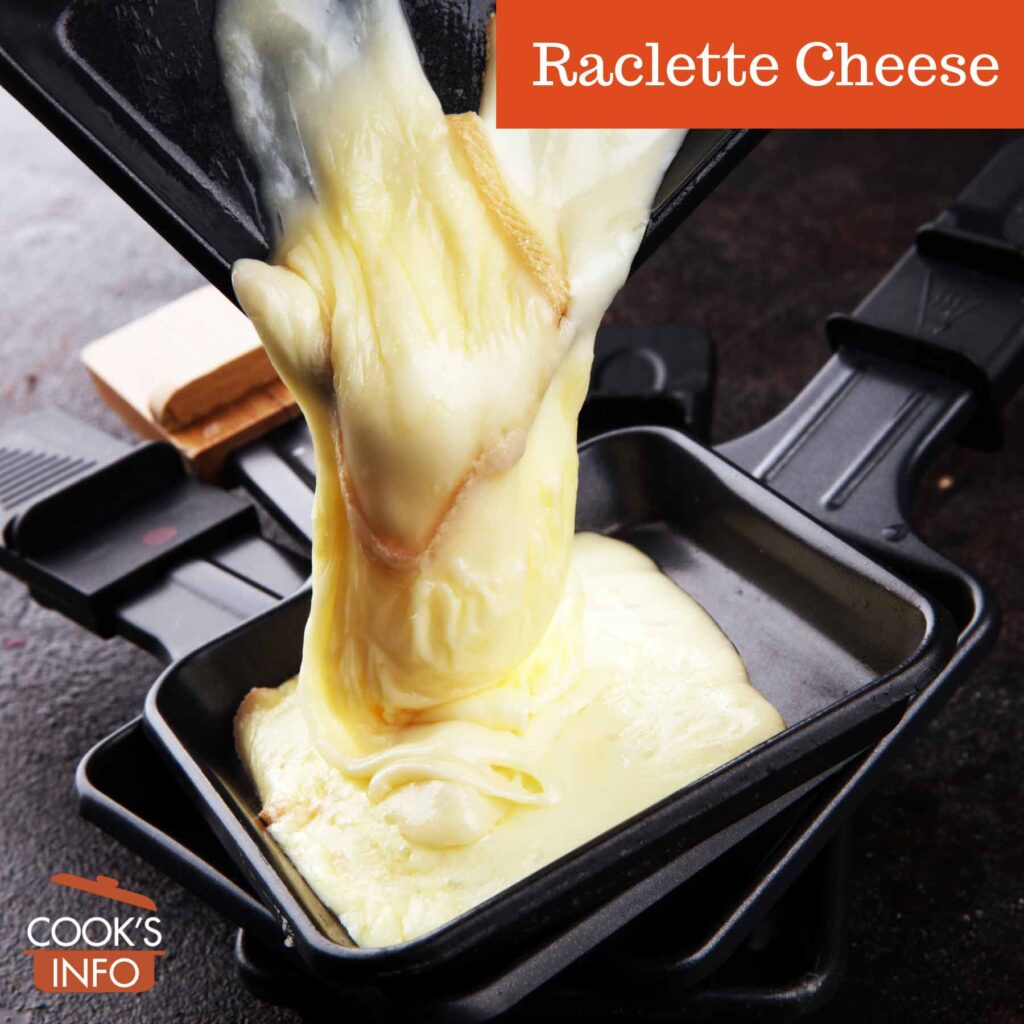 The Swiss version is made in the Swiss canton of Valais. It is called “raclette valaisanne” (Valais Raclette” in English) to make sure no unsuspecting Swiss person gets saddled with the French version instead.

It is made from whole, raw cow’s milk that is no more than 18 hours old. The milk is heated to around 32 to 33 C (90 F), then rennet is added to curdle it. The curd is cut, placed in moulds, and let rest there for at least 6 hours, being turned at least twice to help drain. The cheeses are then aged on red pine wood shelves for at least 3 to 4 months. The rind is washed during that time. 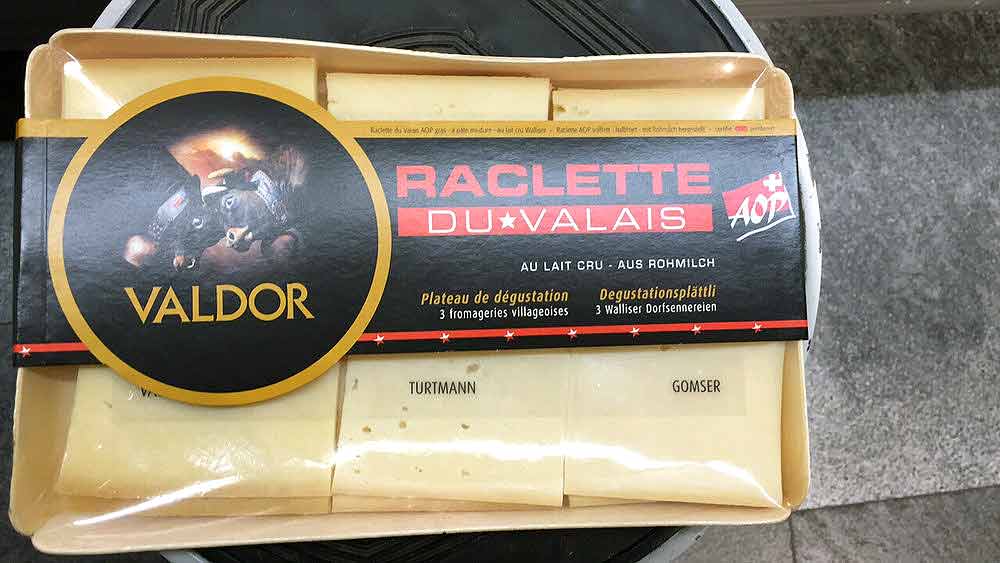 A French version of raclette cheese is made in the areas of France known as Pays de Loire, Poitou-Charentes, Franche-Comté and Rhône-Alpes. It has a very similar taste to the Swiss raclette, but is a tad softer in texture.

An average wheel size for the cheese is 20 cm wide by 3 cm thick (8 inches x 1 ¼ inches), but there are larger ones as well.

Like the Swiss version, it is made from raw cow’s milk. Occasionally, it is made with peppercorns in it.

It is aged at least 2 months.

The cheese was defined by a decree passed by the French government on 20 June 1984, as being made from pressed, uncooked cow’s milk curd, having a 45% fat content, and being aged at least 8 weeks. In 1991, a “Label Rouge” (“Red Label”) was created for it. French raclette cheeses carrying the Red Label have been aged a minimum of 10 weeks.

“Raclette” comes from the French verb “racler”, meaning “to scrape”. 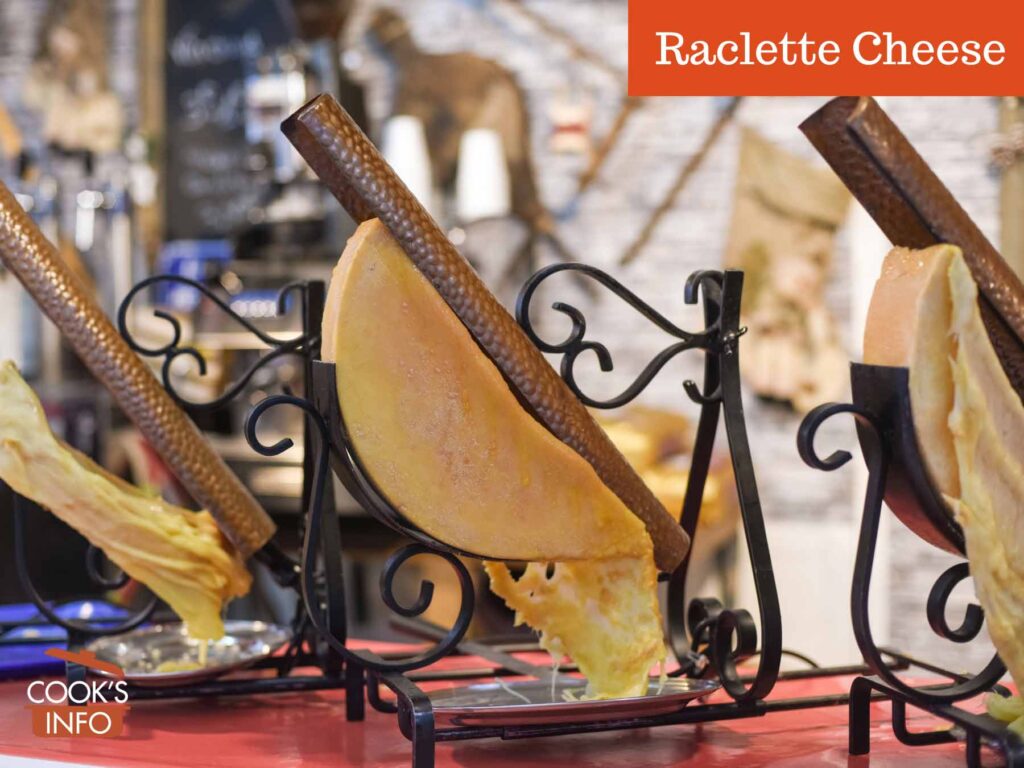 This web site generates income from affiliated links and ads at no cost to you to fund continued research · Information on this site is Copyright © 2023· Feel free to cite correctly, but copying whole pages for your website is content theft and will be DCMA'd.
Tagged With: Raclette (Meal), Swiss Food