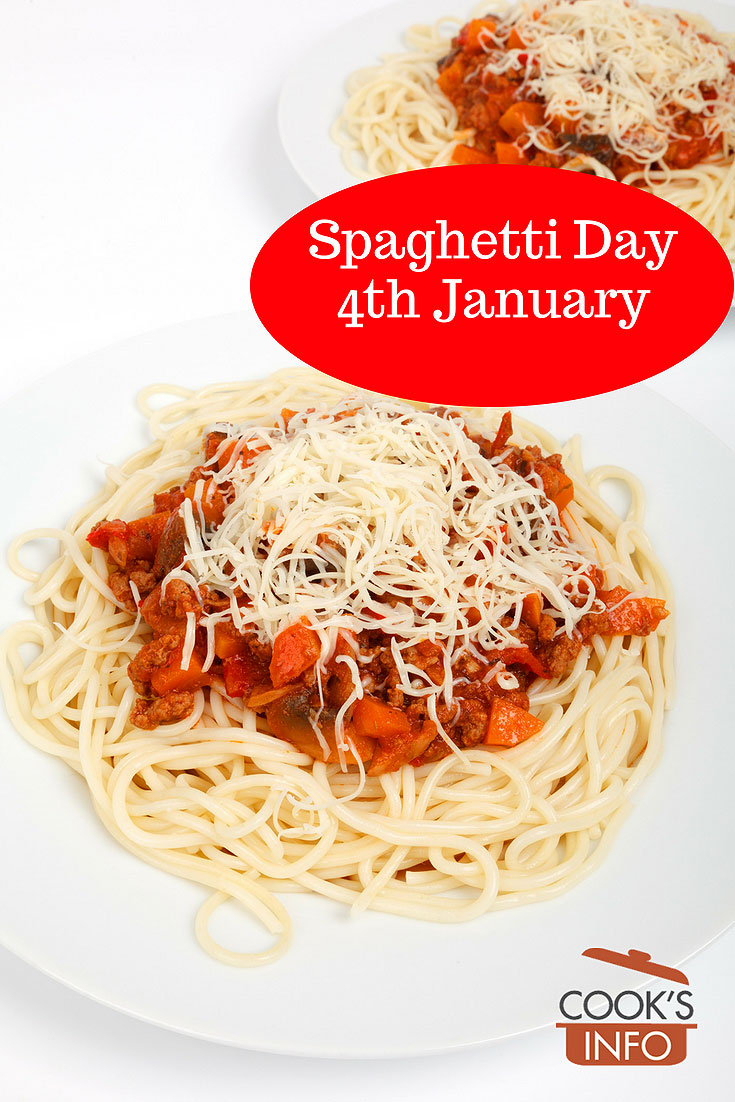 The 4th of January is Spaghetti Day, according to many bloggers on the Internet.

Enjoy a bowl of spaghetti; meatballs or no meatballs, it’s your choice!

You might even want to try zucchini spaghetti or spaghetti from spaghetti squash .

The Start of Spaghetti Days

Many restaurants and cafeterias have long run their own “spaghetti day” promotions, as it is a quick, filling, satisfying food to offer for cheap to people.

In 1953, an eager restaurant in Walla Walla, Washington, tried to promote every Thursday as National Spaghetti Day: 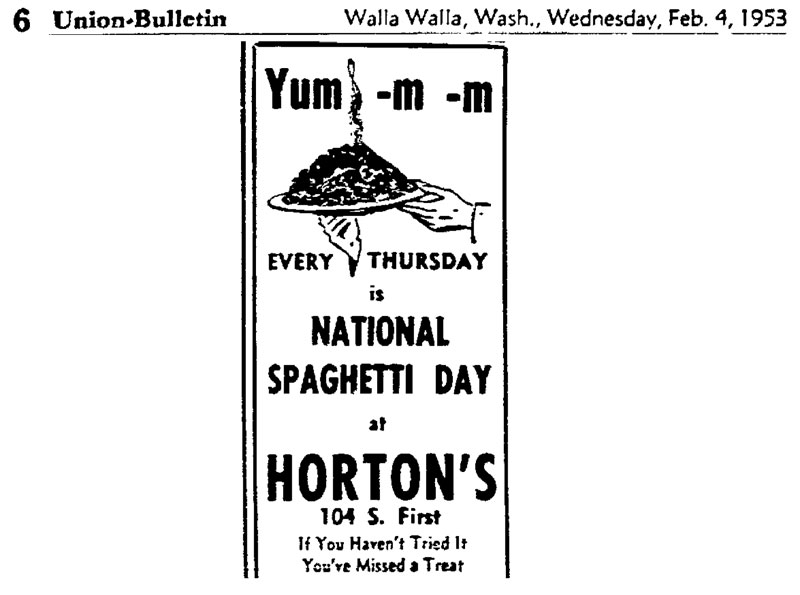 The pasta company Prince Macaroni Manufacturing Company started in the north end of Boston, and in 1939 moved to Lowell, Massachusetts and took on the name of “Prince.” (The company was bought out by Borden in 1987, and in 2001, by New World Pasta. [1]Reidy, Chris. Prince is poised to celebrate 100 years of pasta history. Boston, MA: Boston Globe. 29 August 2013. Accessed July 2019 at https://www.boston.com/news/business/2013/08/29/prince-is-poised-to-celebrate-100-years-of-pasta-history)

At the start of the 1950s, pasta in North America had an image problem.

“…in the 1930s and ‘40s, a kid knew his father was on a losing streak at the race track when mac-and-cheese showed up on the dinner table several days in a row. In those days, spaghetti was a dish for poor immigrants and working-class folks on a tight budget.” [2]Reidy, Chris. Prince is poised to celebrate 100 years of pasta history.

To change this, in 1950, the owner of Prince, Joseph Pelligrino, got a bunch of different competing pasta makers to meet to consider a joint promotion to sell more spaghetti.

“Thirty-five years ago [1950], at a meeting of the long-defunct National Macaroni Institute, Joseph Pelligrino… proposed that he and his fellow independent dried pasta makers band together to promote more pasta eating among Americans… When Pelligrino made his pitch for a national spaghetti slogan back in 1950, 250 pasta companies of the old school were in operation.”

Pelligrino already had a suggestion ready to put before the meeting — to promote one day of the week as Spaghetti Day.

“Pelligrino had earlier paid a visit to an ad man at a small firm in Boston, one Jerome O’Leary, famous only as “The Voice of the Boston Braves.” O’Leary and Pelligrino had decided that the macaroni men needed to pick a day for Americans to set aside for spaghetti.”

“It couldn’t be Monday,” Pelligrino’s son, Joseph P., 46, [recounted] … “because Monday was washday traditionally, right? And it couldn’t be Tuesday, because in New England that used to be franks and beans day. Friday was out; that was fish. Sunday was chicken. So quite undramatically, by a process of elimination, Jerry O’Leary and my father chose Wednesday.”

Pelligrino took the Wednesday promotion idea to the meeting. It was rejected. There was just too much competition and distrust amongst the various pasta makers for them to agree on much.

“Pelligrino put the suggestion forth at that meeting in 1950: “Wednesday is Spaghetti Day.” They would all work together to make the slogan stick. It was simple enough; simple as spaghetti itself. The reaction? Unanimous: thumbs down… In those days, those guys competed at the personal level. They were furtive, patriarchal — they each had a territory that they guarded with their lives.” Max Busetti, communications director of the present-day National Pasta Association, concurs, but in the present tense, not the past: “The industry is rather private. Tight-lipped. It goes back to the Italian ancestry. They’re suspicious of each other. They’ll fight for their group. Secretive. I can’t even get some of them to send me press releases.”

Pelligrino decided to go it on his own.

As planned, the campaign centred around the slogan, “Wednesday is Prince Spaghetti Day.” The ads ran on radio, later moving to television as well as television became more prevalent. The campaign was a huge success. In the mindset of a generation, Wednesdays became equated with spaghetti days. 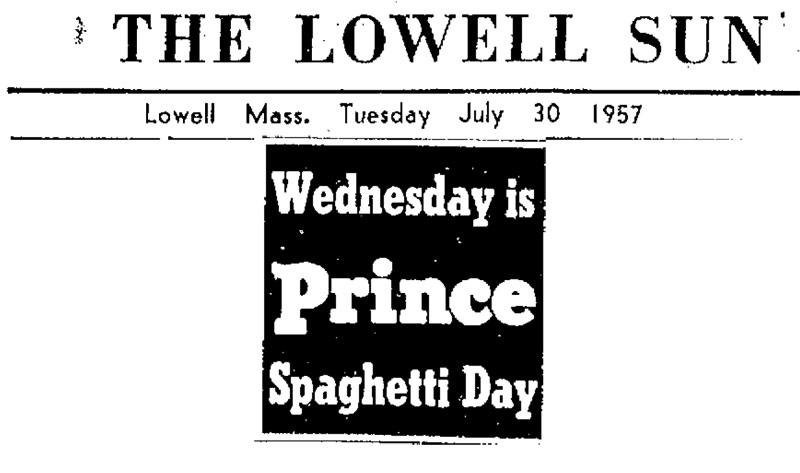 Many restaurants eventually jumped on the Wednesday Spaghetti Day bandwagon, except they wanted you to let them cook the spaghetti for you: 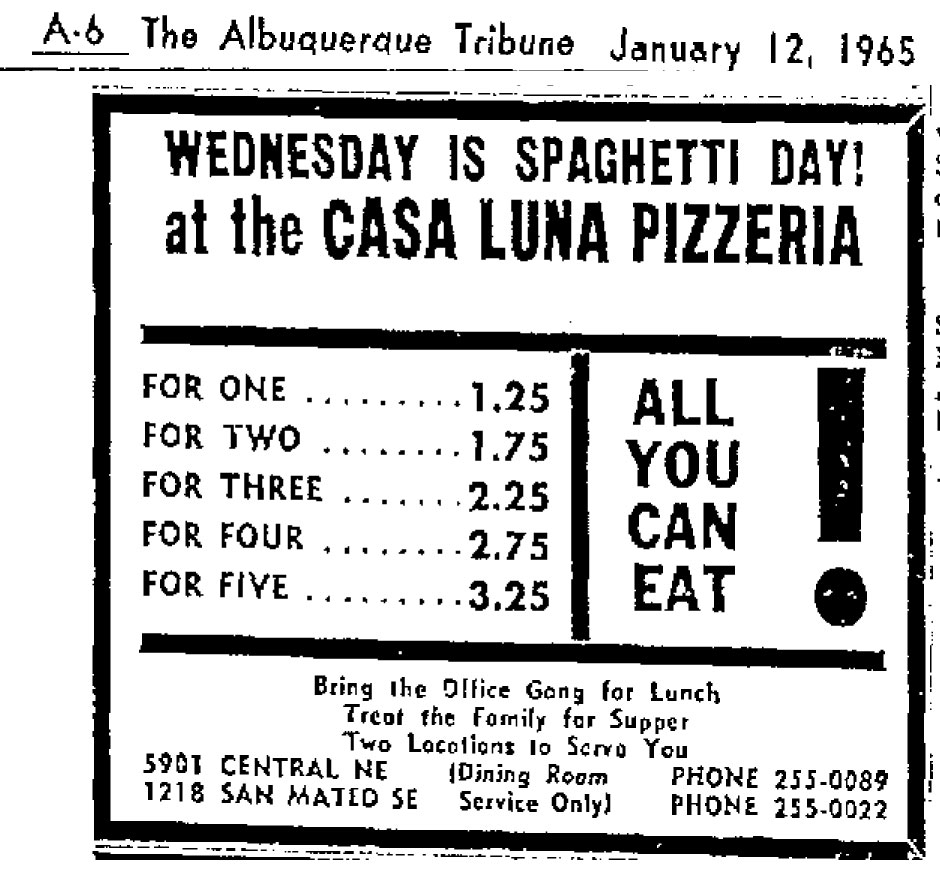 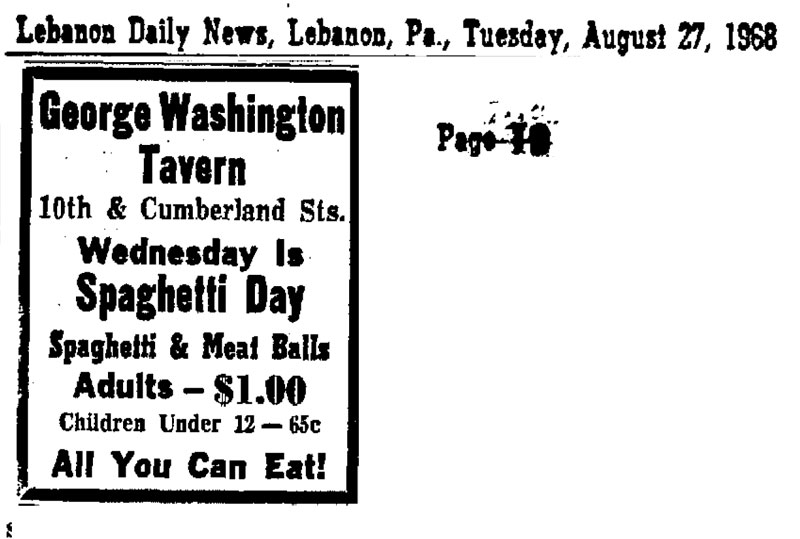 This web site generates income from affiliated links and ads at no cost to you to fund continued research · Information on this site is Copyright © 2023· Feel free to cite correctly, but copying whole pages for your website is content theft and will be DCMA'd.
Tagged With: Pasta