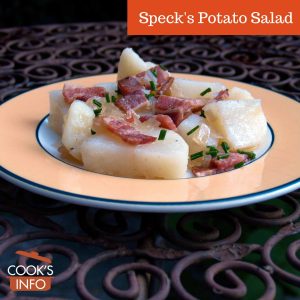 Speck’s Confectionery was at 414 Market Street, St. Louis, Missouri [3]The St. Louis Story: Library of American Lives, 1952 / by McCune Gill (Hopkinsville, KY: Historical Record Association, 1952), and according to Paddleford, was extant before 1849.

The restaurant would not divulge the recipe, but Paddleford had a St. Louis home economist, Thelma R. Lison, figure it out for her. “One of our favorite potato salads is from Speck’s, once a German coffee house on Market Street in St. Louis but lost in the city’s great fire in 1949 [ed: sic] [4] CooksInfo.com was unable to find any record of a great St. Louis fire in 1949. In its July 1966 Bulletin, WMT Radio, of Eastern Iowa, said that Speck’s “closed a few years ago.”. Good cooks of the town all had their version of the Speck’s Potato Salad specialty — but always something was lacking. It took Thelma R. Lison, home economist for an advertising agency, to spy out its secret. Here is Thelma’s recipe and the real McCoy, say those in the know.” [5]Paddleford, Clementine. Any heritage recipes for potato salad? Herald-Tribune News Service. As printed in the Mason City Globe-Gazette, Iowa, 3 October 1963, page 24.

The 1963 version of the recipe that she published had the following changes in it (compared to the ingredients given above):
Bacon: ¼ cup finely diced
Onion: ¼ cup chopped
Celery Seed: reduced to ¼ teaspoon
Flour: 1 tablespoon added to the recipe, to be blended in with the sugar, salt and pepper.
Simmering time: increased to 10 minutes.

The recipe was picked up and published again in 1990 by Phillip Stephen Schulz in his book, “As American as Apple Pie.” (Simon & Schuster)

In 1968, Cecily Brownstone, Associated Press Food Editor, offered a recipe entitled just “Hot Potato Salad.” It was identical to Paddleford’s 1963 version, except she had you bring the water to a boil and dissolve 1 beef bouillon cube in it. [6]”What’s Cooking” column. Lawton, Oklahoma: Lawton Constitution. 3 May 1968.

And by 1969, it was being made at a posh restaurant in New York called “Luchow’s.” The name of this version interestingly keeps Speck in the name, but in calling it “Speck Salat”, implies the relationship between American bacon and German Speck (the prosciutto-like ham / bacon.) This version keeps the idea of meat stock being added, but uses egg yolk as a thickener instead of flour.

This version was record by the columnist Earl Wilson in February of 1969: “The late Dinty Moore astonished me years ago when he said he always put sugar in the hamburgers he served at his famous restaurant. Now I find that Luchow’s, where so many of the Glamour Set meets, especially on Sunday night, has hot potato salad with bacon which is also sweetened with sugar – but only a teaspoon. In my new passion for All-American cooking, I’ve found this latter dish is something not known to everybody. So for all you amateur chefs who’d like to be as good a cook as my Beautiful Wife, here’s Jan Mitchell’s own recipe: SPECK SALAT (the German term) “1 pound potatoes, 6 slices bacon, diced; 1 medium-size onion, diced; ½ cup vinegar; ½ cup stock or bouillon; 1 teaspoon salt; ¾ teaspoon pepper; 1 teaspoon sugar; 1 egg yolk, beaten. Scrub potatoes; rinse. Boil in jackets; let cool. Peel and cut into ¼-inch slices. Cook bacon in hot pan until crisp. Add onion; stir and cook until transparent. Add vinegar, stock or bouillon and seasonings. Stir; let come to a boil. Stir in egg; remove from heat and pour over potatoes. Serves 2 to 4.” [7]Wilson, Earl. Sugar Potato Salad, ‘Burgers. In his “It happened Last Night Column.” Printed in Winona Daily News: Winona, Minnesota. Tuesday, 4 February 1969. Page 4

This web site generates income from affiliated links and ads at no cost to you to fund continued research · Information on this site is Copyright © 2022· Feel free to cite correctly, but copying whole pages for your website is content theft and will be DCMA'd.
Tagged With: Bacon, Cider Vinegar, Clementine Paddleford, Potato Salad