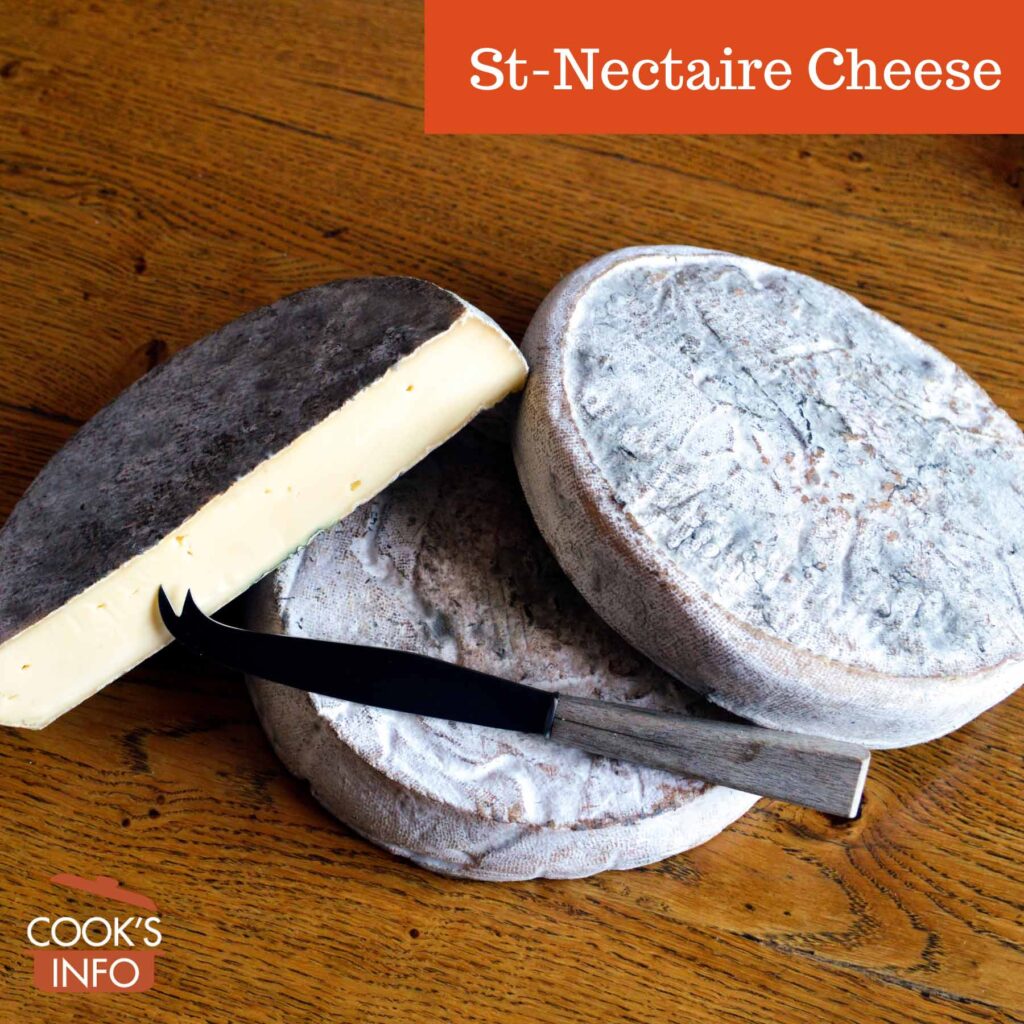 St-Nectaire cheese is a round, flat, semi-firm cheese with a soft, milky taste.

The rind is edible, though it can be gritty.

There are several different brands.

St-Nectaire cheese is made in 72 districts in total in the Cantal and Puy-de-Dôme départments of the Auvergne of France.

It is made twice daily, morning and evening.

The industrial St-Nectaire Cheeses, marked by square labels on them, are made in a dairy using pasteurized milk, which can come from several herds.

The milk is put in a vat, and starter culture (lactic acid bacteria) and calf’s rennet are added. The temperature is kept at 33 C (91 F) so that the curd is never cooked. Within 15 to 25 minutes, the milk will be curdled, at which point it is cut into pea-sized pieces, then stirred for 15 minutes.

The whey is drained off, then the curd is put in moulds, and pressed. The cheeses are then turned out of their moulds, and stamped with their producers’ mark. They are salted, wrapped in cheesecloth, placed back into a mould, and then pressed for 24 hours, during which time they are turned once.

The cheeses are then stored for 7 days between 6 and 10 C (42 and 50 F), then sent for aging on wooden shelves for about 6 weeks. They are then washed with brine, scraped and turned.

Some producers prefer to wash but not scrape the cheese, resulting in ones that have a pink rind; some prefer to scrape but not wash the rinds, giving a grey rind. The grey comes from a mould called “geotrichum candidum“, though the strain varies from cheesemaker to cheesemaker. Other cheeses end up with rinds with mould on them that is white, yellow and red.

The farmhouse versions of St-Nectaire Cheese, marked by oval labels on them, are made using raw milk from cows. The milk must come from a single herd of Salers cows.

Another cheese made from milk from Salers cows is Salers Cheese.

The cheese has been subject to frequent recalls owing to the presence of food-borne pathogens in it. Follows is a sampling of some instances.

In 2021, there was a recall of two farmhouse brands — St-Nectaire AOP Farmer from Le Coq brand and Cantorel Farmer St-Nectaire — owing to the presence of Listeria monocytogenes. [1]Adey, Oliver. Contaminated batches of Saint-Nectaire cheeses. 10 August 2021. Accessed May 2022 at https://gettotext.com/contaminated-batches-of-saint-nectaire-cheeses/

In 2015, there was a recall of two brands — St-Nectaire Fermier (made with raw milk) and St-Nectaire Laitier (made with pasteurized milk) — owing to the presence of Listeria monocytogenes. [2]Two batches of French cow’s milk cheese contaminated with Listeria monocytogenes. Hong Kong Centre for Food Safety. May 2015. Accessed May 2022 at https://www.cfs.gov.hk/english/press/20150529_0271.html

In 2013, there was a recall of “Great Murols” brand of St-Nectaire farmhouse cheese owing to the presence of Listeria monocytogenes. [3]Recall of cheeses. Dangers alimentaires. 16 December 2013. Accessed May 2022 at https://www.dangersalimentaires.com/en/2013/12/rappel-de-fromages-fermiers/

In June 2002, there was a recall of L’Or des Domes brand of St-Nectaire (made with pasteurized milk) owing to the presence of Listeria monocytogenes. [4]Sogg, Daniel. Company Recalls Cheese Due To Listeria Contamination. Wine Spectator. 29 June 2022. Accessed May 2022 at https://www.winespectator.com/articles/company-recalls-cheese-due-to-listeria-contamination-21323

In 1987, there was a recall of Centre Lait brand of St-Nectaire owing to the presence of Listeria monocytogenes. [5]French Cheese Recalled Due to Listeria Bacteria. Los Angeles, CA: The Los Angeles Times. 30 April 1987. Accessed May 2022 at https://www.latimes.com/archives/la-xpm-1987-04-30-mn-2895-story.html

St-Nectaire is the name of a village, believed to be named after the “Sennecterre” family who were important in France in the 1600s.

This web site generates income from affiliated links and ads at no cost to you to fund continued research · Information on this site is Copyright © 2022· Feel free to cite correctly, but copying whole pages for your website is content theft and will be DCMA'd.
Tagged With: Auvergne Cheeses, Washed-Rind Cheeses