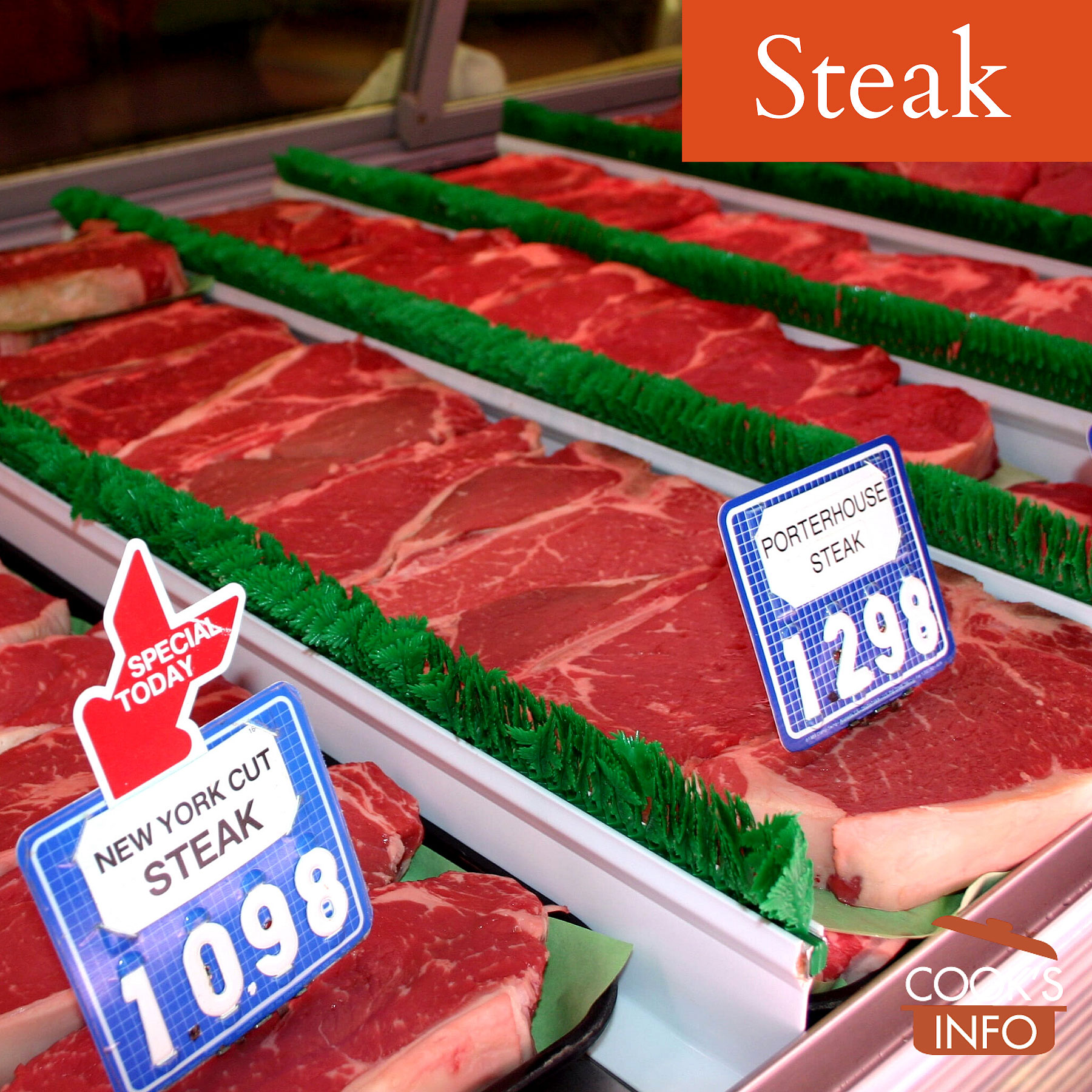 A steak is a piece of food that is cut into a thick slice. In the English-speaking world, it used to always be equated with a slice of beef, or failing that, fish such as tuna or salmon.

“Steak: a piece of meat (beef, unless otherwise indicated) or fish cut to be a convenient portion, usually a small slice about 2 cm (0.75″) thick for grilling (US broiling), frying, or cooking over charcoal.” [1]Davidson, Alan. The Oxford Companion to Food. Oxford, England: Oxford University Press:Oxford. 1999. Page 904.

In the 2000s, vegetarians began promoting eggplant and cabbage steaks.

It’s worth remembering, too, that in France, it’s not uncommon to see a “bifteck de cheval” (horsemeat steak) for sale. [2]”Bifteck de cheval” is not to be confused with “bifteck à cheval”; the first is horsemeat, the second is a cooked beef steak served with a fried egg on top.

Nevertheless, in most people’s mind, a steak is still a thick slice of beef unless otherwise specified.

A steak doesn’t have to be a boneless cut of meat: some people prefer their steak to have a bone in it.

The problem with the word steak is that it may have been so overused now as to debase the value that had come to be associated with it in the 1900s. Retailers like the word because they know it implies a superior cut of meat, and so apply it even to tougher cuts that actually need low and slow cooking methods such as braising. And technically they’re not wrong: technically a steak is a type of cut style, not an indication of what exactly has been cut. Owing to expectations, though, the name can actually mislead the consumer in how to prepare it, the consumer end up having a lousy meal, and is put off beef steak all together.

Outside the store, at home, the use of the word steak might be said to depend on whether someone is referring to a piece of meat that they are serving to you, or if they are referring to a piece of meat that will be served to them. If it’s something that is being served to them, then people’s expectations of what the word “steak” means goes way up. 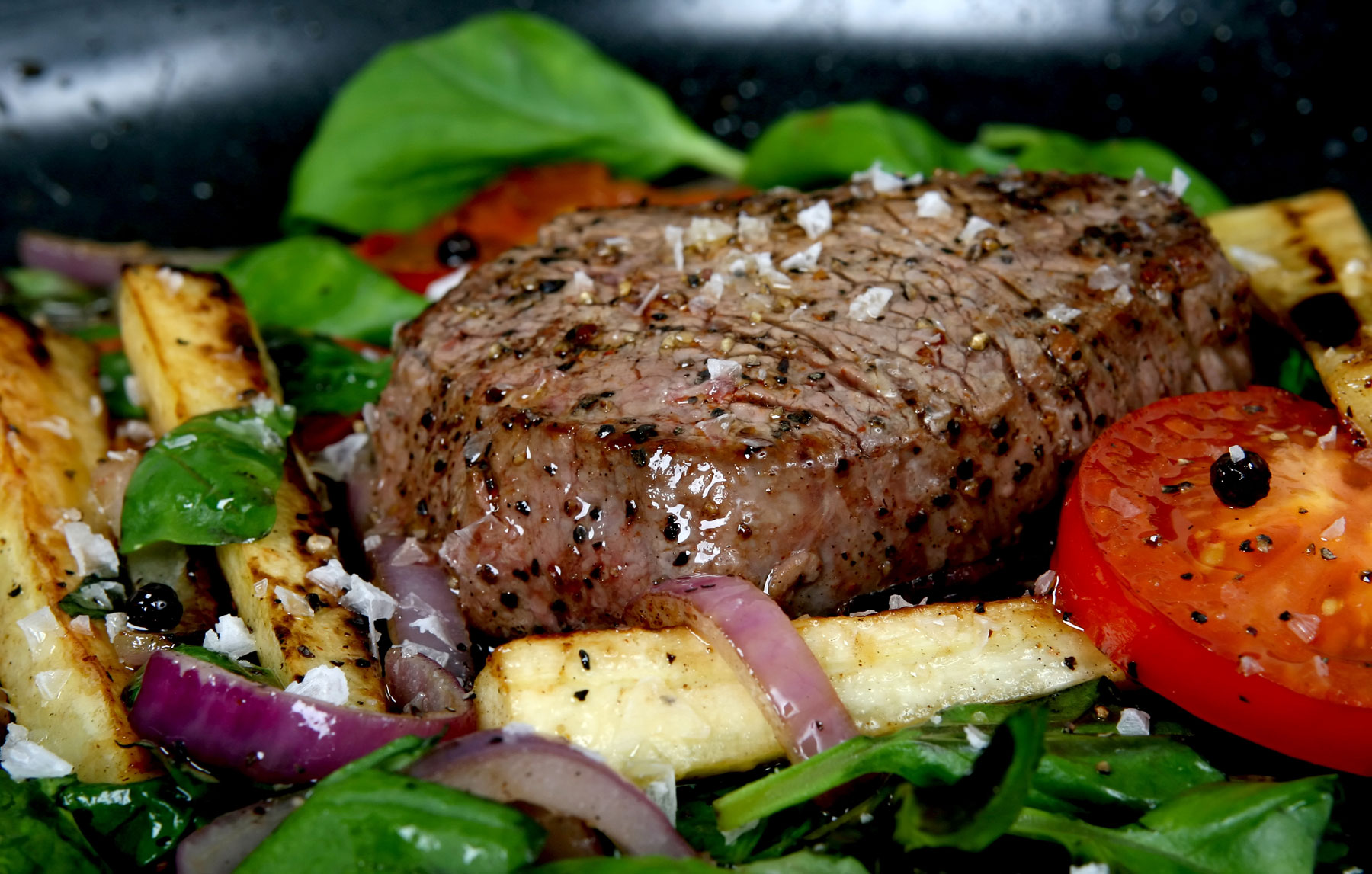 The Larousse Gastronomique (1988 edition) says that the concept of “steak” was introduced to the French by the English:

“Introduced to France after the Battle of Waterloo by the occupying English forces, steak was originally cut from the filet, rump, or sirloin. It then became customary to cut steaks from all roasting joints and subsequently from braising joints as well.” [3] Lang, Jennifer Harvey, ed. Larousse Gastronomique. New York: Crown Publishers. English edition 1988. Page 1018.

The English word “steak” came from the Norse word “steik” meaning “to fry or roast.” In Middle English, that became “steike”, and then later in English, “steak”.

This web site generates income from affiliated links and ads at no cost to you to fund continued research · Information on this site is Copyright © 2022· Feel free to cite correctly, but copying whole pages for your website is content theft and will be DCMA'd.
Tagged With: Beef Steaks