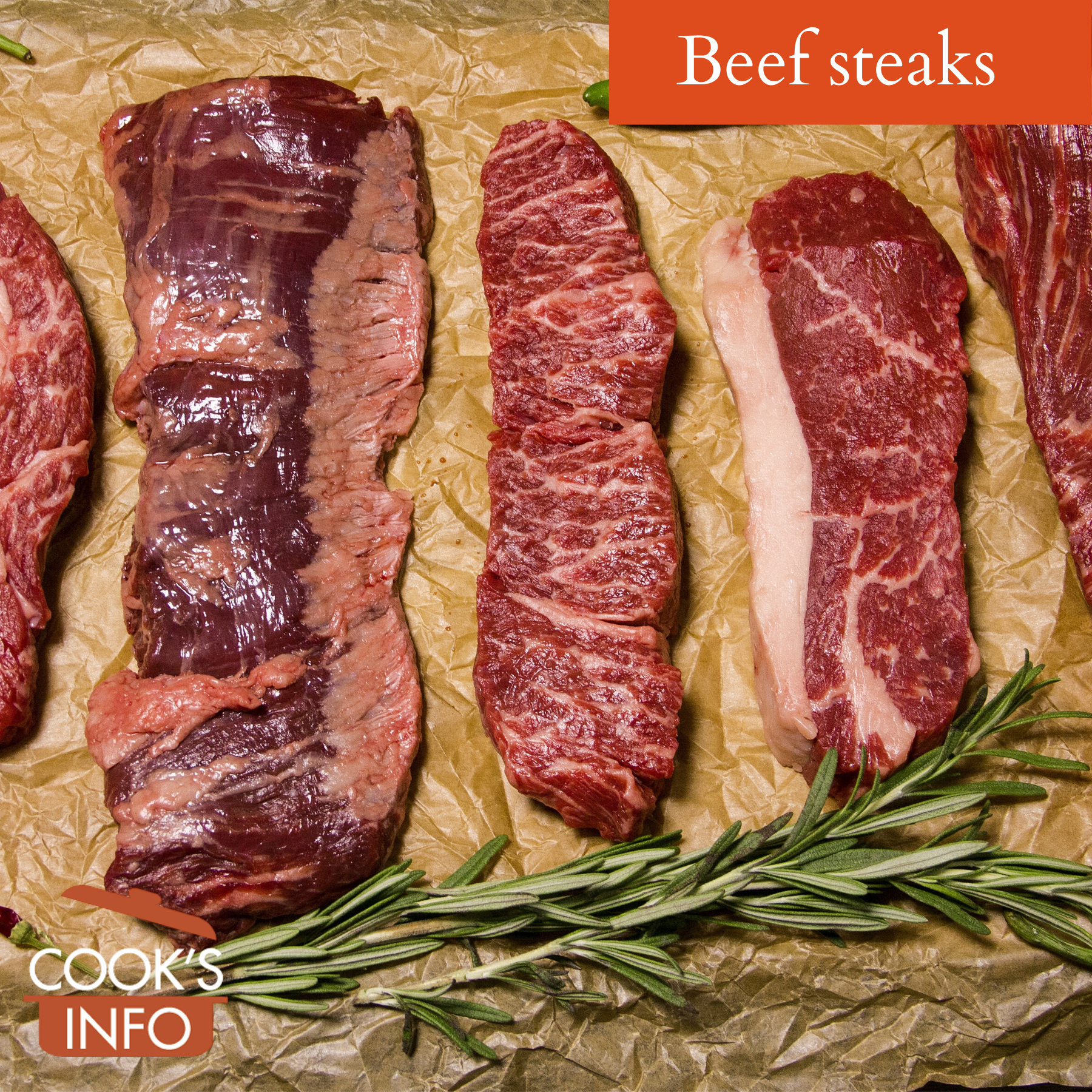 A beef steak is a slice of beef cut thickly across the muscle. It can be “bone-in” or boneless.

A steak differs from a roast in that a steak is meant to be an individual portion, while a roast serves more than one person.

Generally, when people hear the word “steak” they assume beef, and they assume a cut of beef tender enough to cook quickly with dry heat. It’s important to note that a steak is a way of cutting meat; it is not legally indicative of a particular tenderness of beef. In order to be suitable for dry heat cooking, the steak needs to be from the more tender areas of the carcass, namely the rib, short loin or sirloin areas of cattle. Steaks from other areas of cattle require either cooking with moist heat, or special treatment for dry heat cooking.

In England, steak names relate to what part of the animal they came from. In the US and Canada, steak names are subject to flights of fancy that don’t even give you a clue that the steak came from a cow at all:

“In Britain steaks are named according to the basic joints from which they are cut. These are the fillet (also known as tenderloin, or undercut), a long muscle located underneath the bones of the sirloin. This provides the leanest and tenderest meat. The sirloin itself, removed from the bone and cut into slices, also becomes steaks, less tender than fillet, but with more flavor. Finally, the rump, or aitch bone, a big piece of very lean meat, is usually sliced to give large steaks which have good flavour but are less tender than sirloin. Stick terminology in the USA… varies to some extent from region to region and anyone looking for detailed information will do best to consult American sources.” [1]Ibid.

In order to deal with this, though, we’d have to come up with new terminology for round steaks, flank steaks, London broil steaks, etc., and it’s probably too late for that.

So in the meantime, it’s buyer beware. You have to understand the cut of meat you are buying, because while a retailer is going to charge more for a superior cut of meat, they aren’t going to put flashing caution signs on a tougher cut of meat to warn you.

As a rough guide, 1 minute per side at the start to char each side. Then, per side, an additional:

“Beefsteak” is also a name given since the 1950s to certain types of American male models.

Note that the French word “bifteck” and Italian word “bistecca” usually but do not always mean beef, either, despite being obvious takes on the England word “beef steak.”

Other entries for beef steak are filed under their relevant primal cuts of beef. See more beef steaks.